Offida is the last stop on our tour of beautiful villages in the Marche region. It is located about half an hour inland from Grottammare, where we were until just now. It is surrounded by vast vineyards.

It was a place where I could go without getting lost if I followed Google Maps, but if I simply searched the name of Offida, I got lost after I got there because it points to a place quite far from the center. So be careful when you go to the place by checking Google map. It’s a hassle, but it’s better to look at the map in detail and check where the church, town hall, central square, etc. are.

I had some trouble with Google Maps, but I got the location of the center without any trouble and headed there as soon as I could, but in contrast to Grottammare, there were many people and cars. Eventually we found a good spot near the center, but I think we wandered around the village for less than 10 minutes to do so. 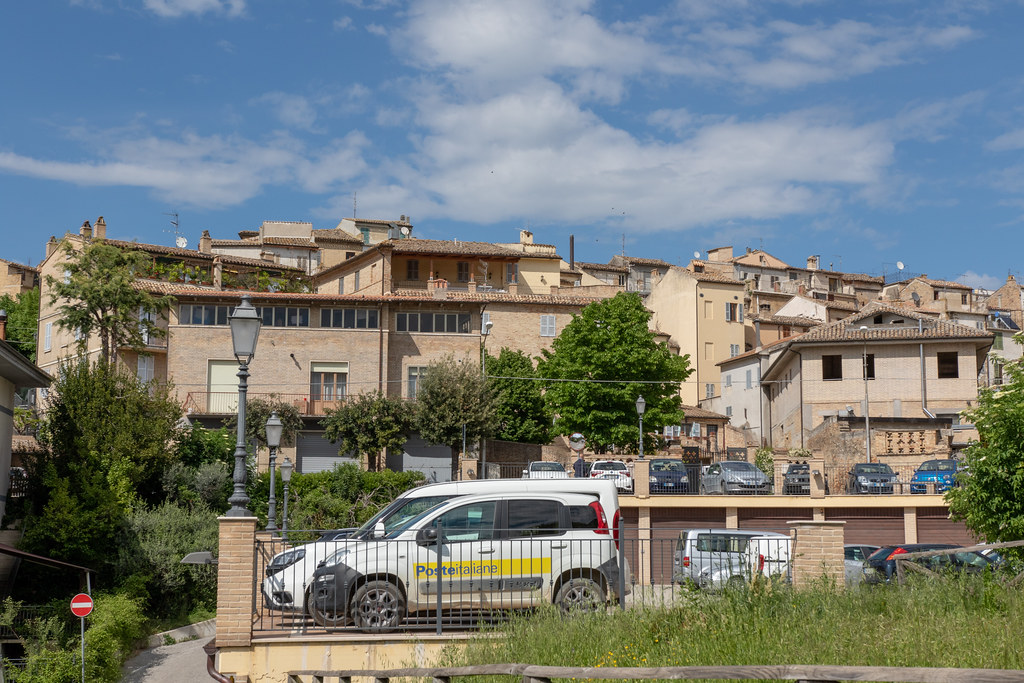 As always, we’ll provide a map showing you where to park.

The history of Offida is explained very carefully on the official website (in Italian, English and German). Roughly speaking, the city was settled from the Stone Age, and then, as is standard Italian history, came under the rule of the Etruscans, the Roman Republic, the Empire, the Lombards, and then the Middle Ages. It was in the 12th century, during the reign of Innocentius III and the heyday of the Papacy, that the city experienced its greatest economic development.

By the way, the name « Offida » is derived from « oph » which means « rich, mountain, hill » in Indo-European language. The Greek word « ophis » and the Roman word « oppidum » mean « snake », but they don’t seem to be derived from this root. Well, the village of Offida was bigger than I expected, and each building was very fine. 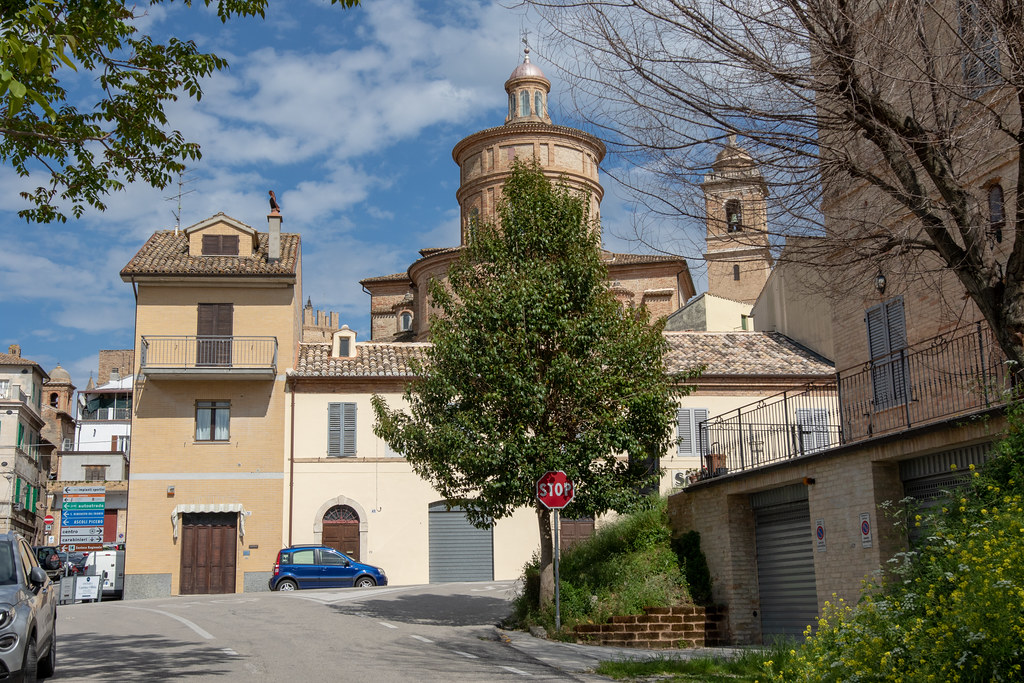 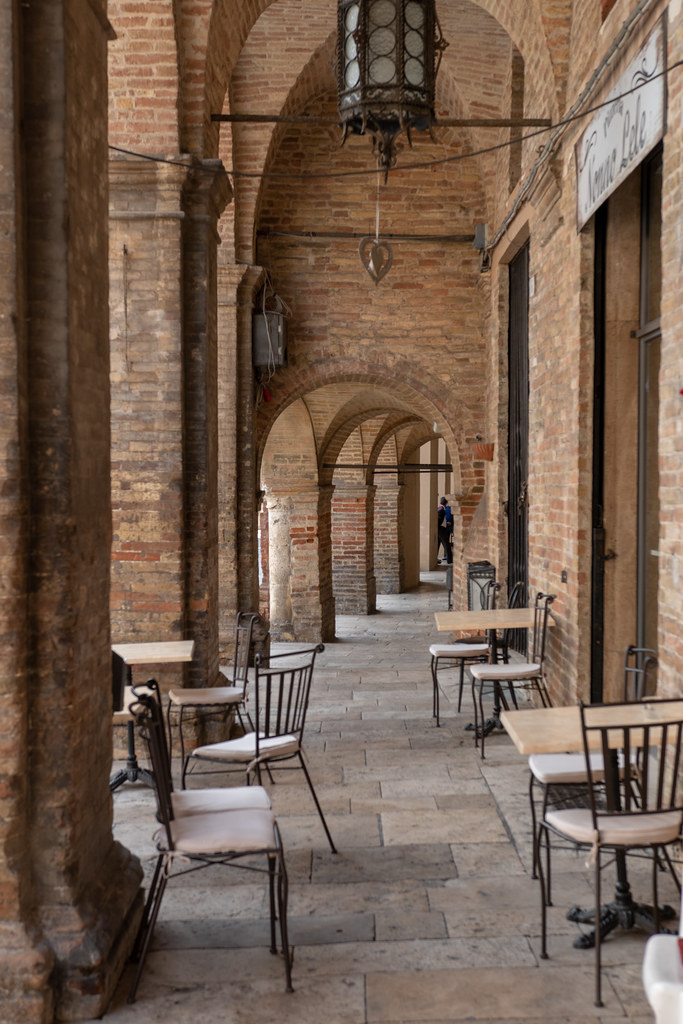 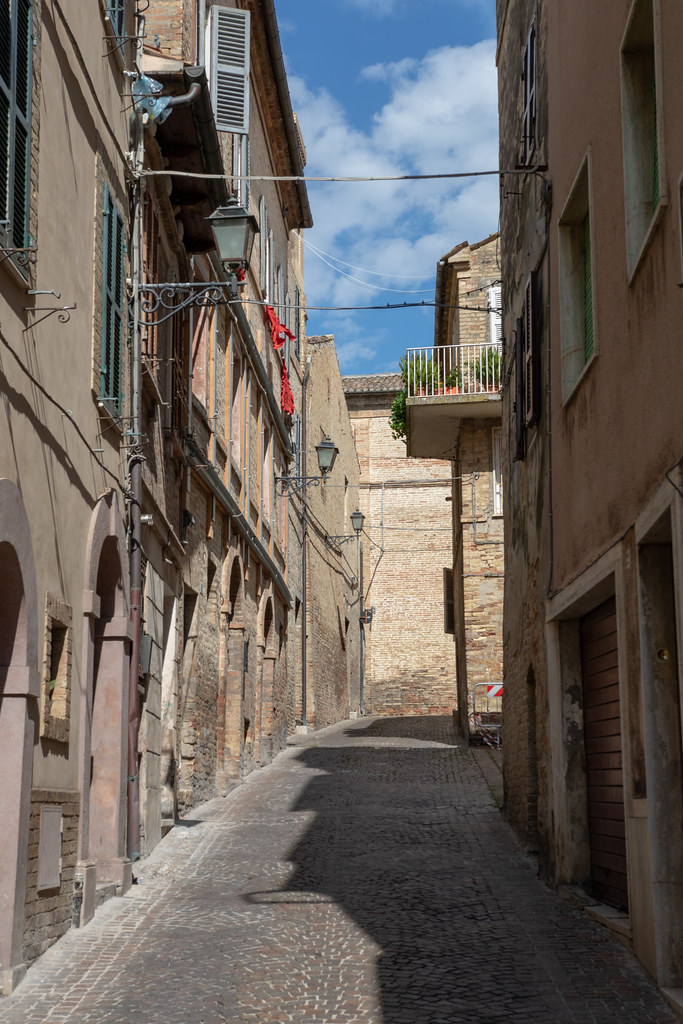 If you walk for about a minute from the parking lot, you will arrive at Piazza del Popolo, the triangle-shaped central square. The town hall in front of the square was built around the 15th century. 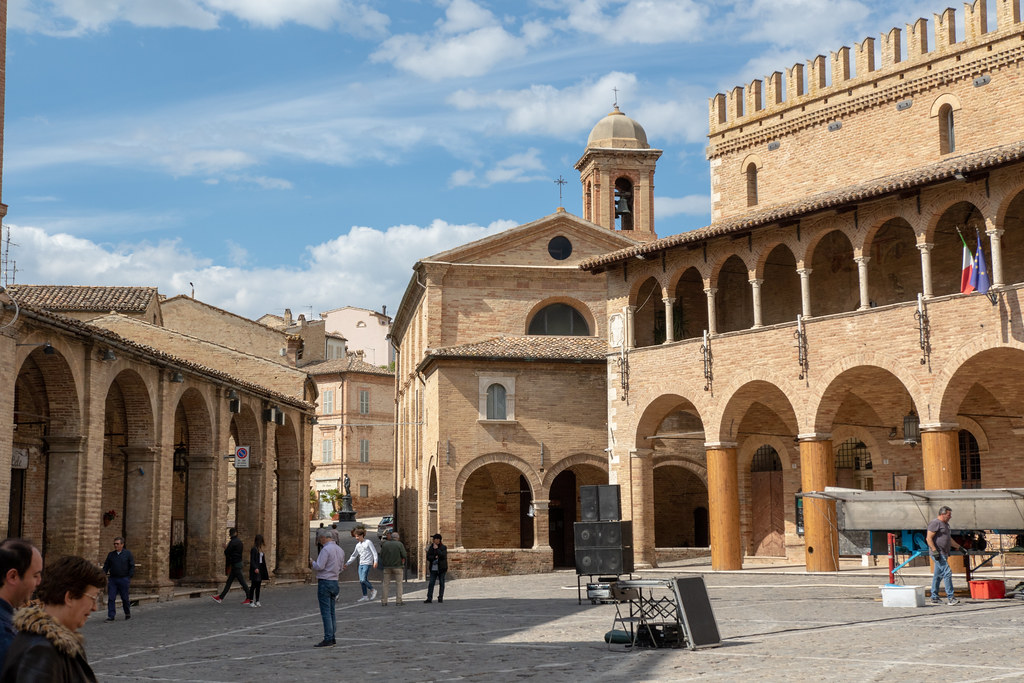 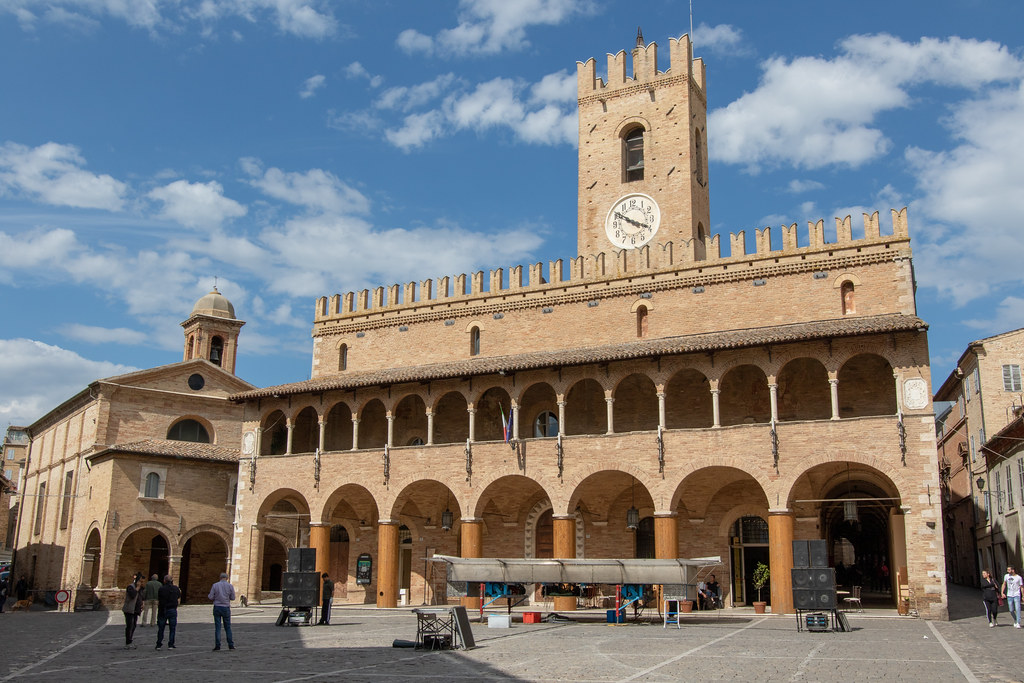 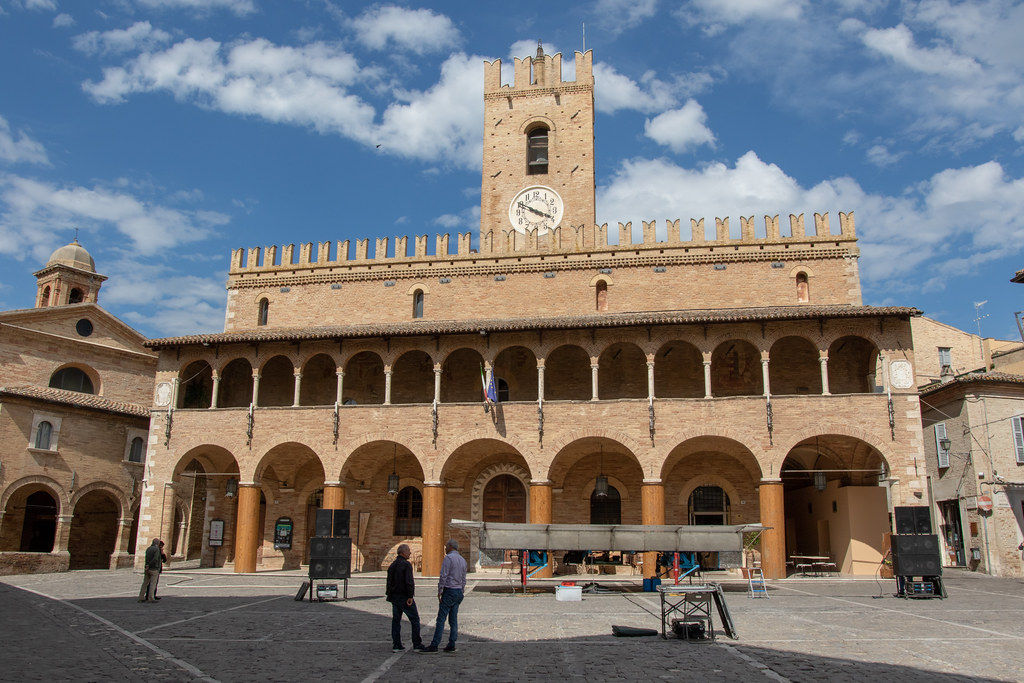 There are two churches in Piazza del Popolo, and the one in front of the City Hall is the Church of Santa Maria Assunta. The white marble ceiling was impressive. 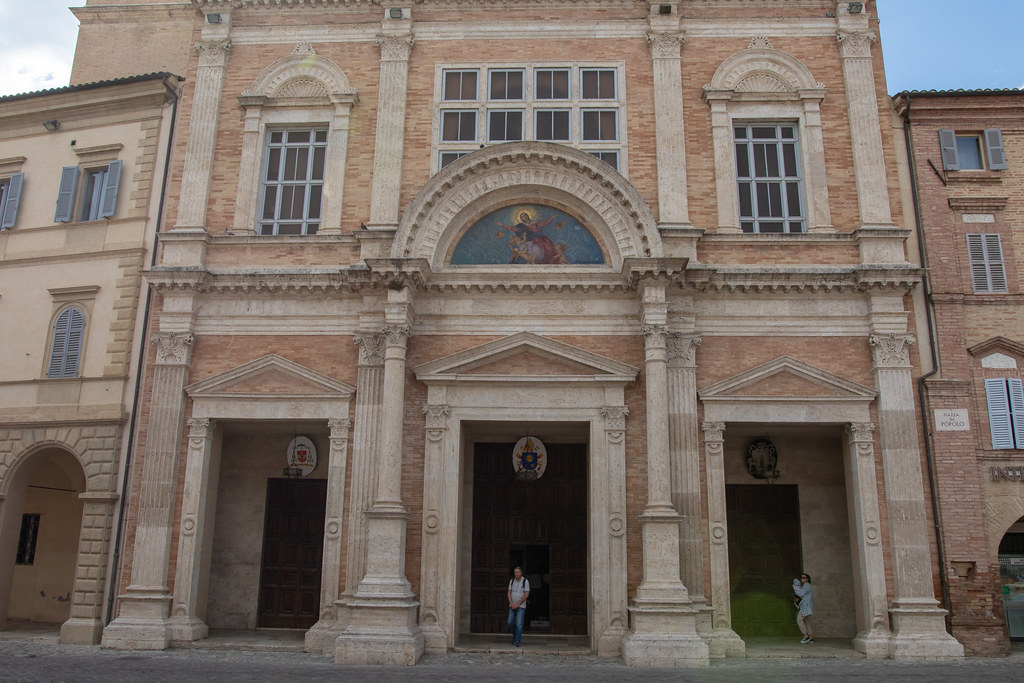 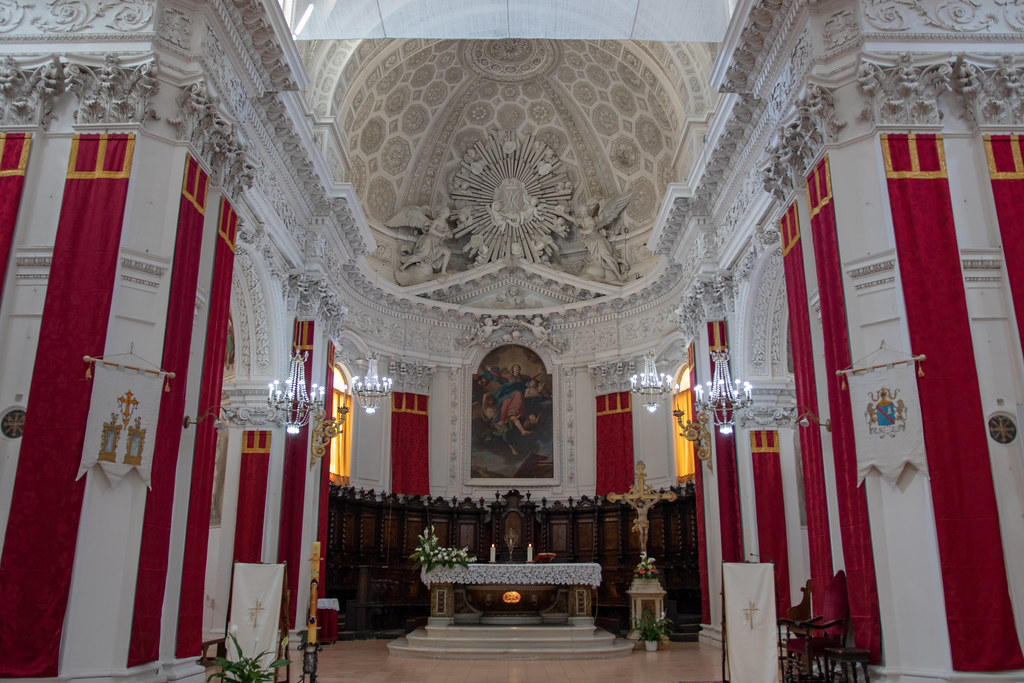 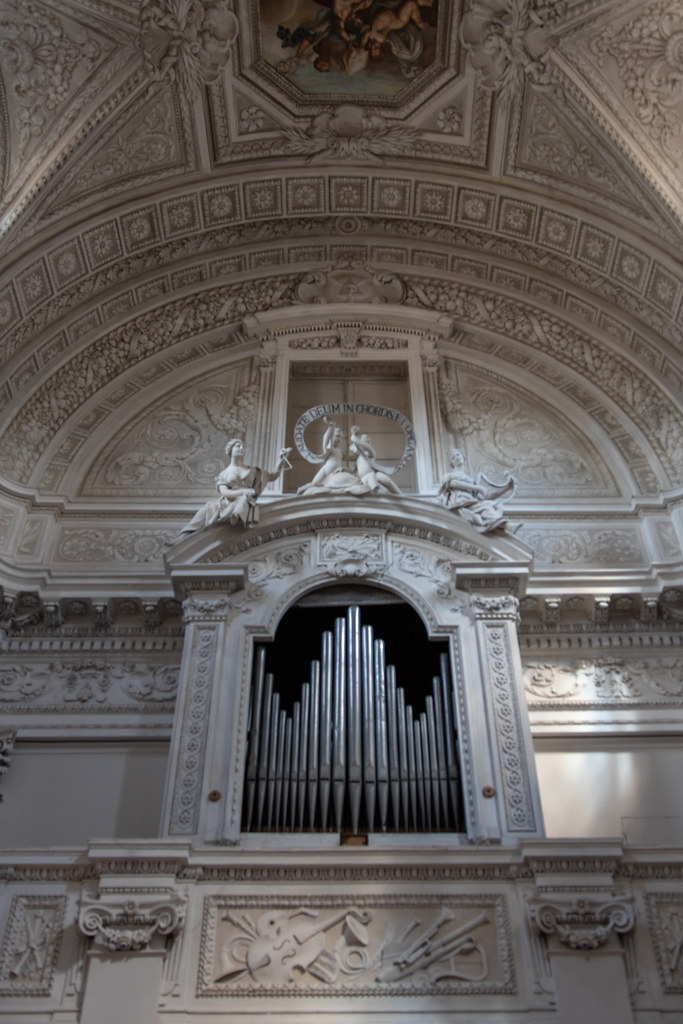 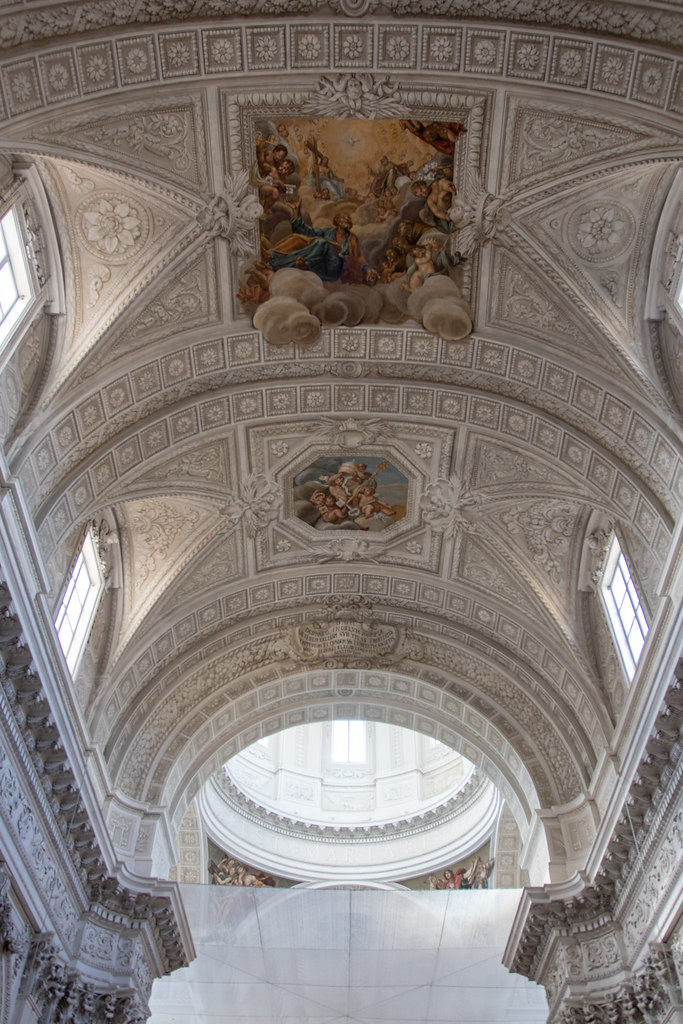 There was also a church on the left side of the town hall. 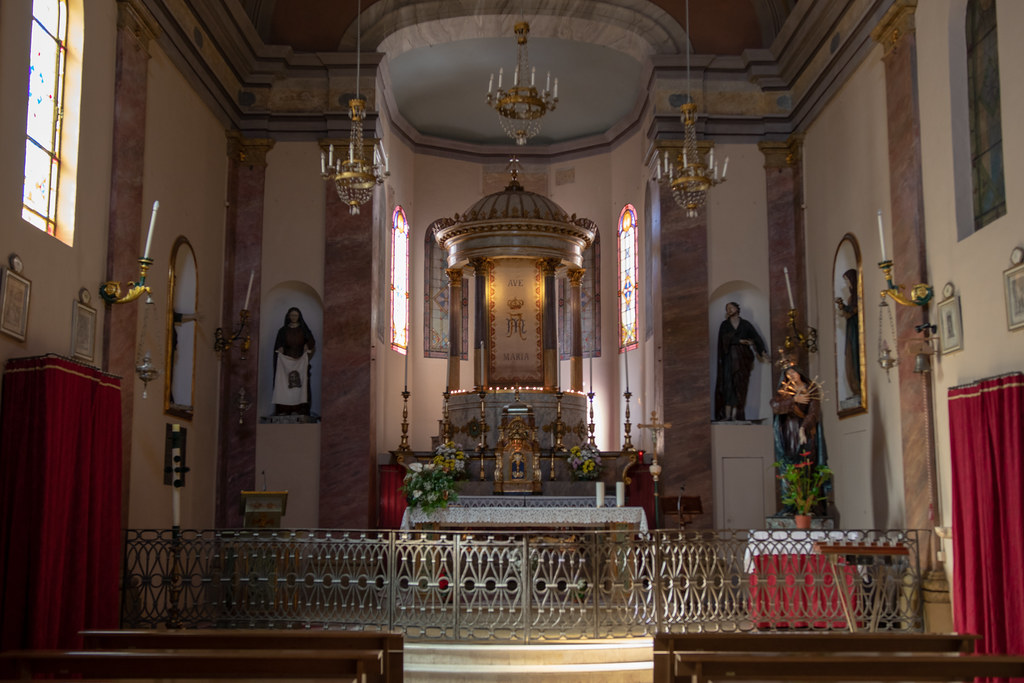 By the way, I just found out by researching to write this article, there was a church called « Santa Maria della Rocca » (Santa Maria della Rocca Church) on the outskirts of the village, which is a characteristic church architecture in Marche. I had missed it. It was very regrettable. Even though this village was relatively big, we missed a tourist information center there.

I want to visit as many places as I can, so I tend to do a little research on each place. This is what I have learned through visiting beautiful villages for almost 10 years. As for the church of Santa Maria della Rocca, I could have easily found it out by looking up the village on wikipedia, so from now on, I’ll be sure to look at wikipedia when I get to the village, even if I have to go there.

After a quick look around Piazza del Popolo, we strolled around the village at will. 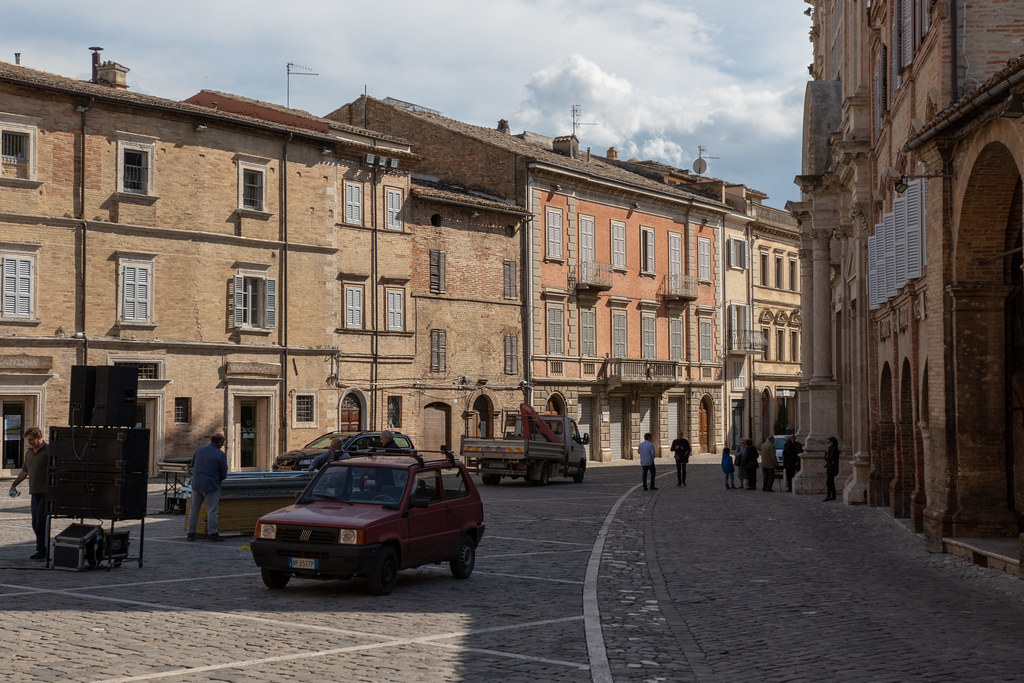 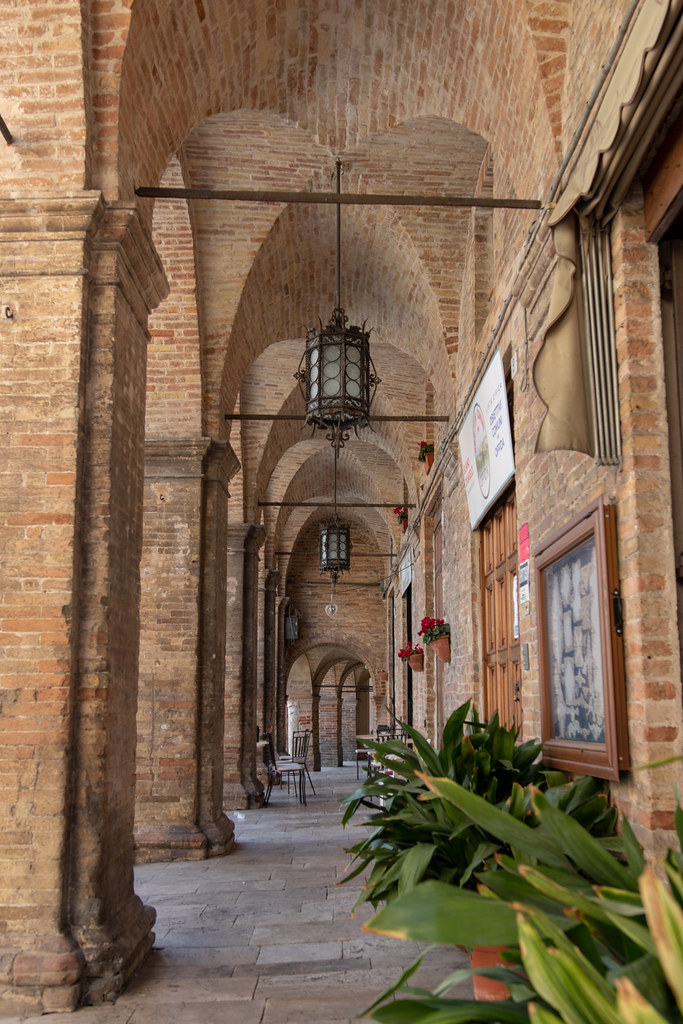 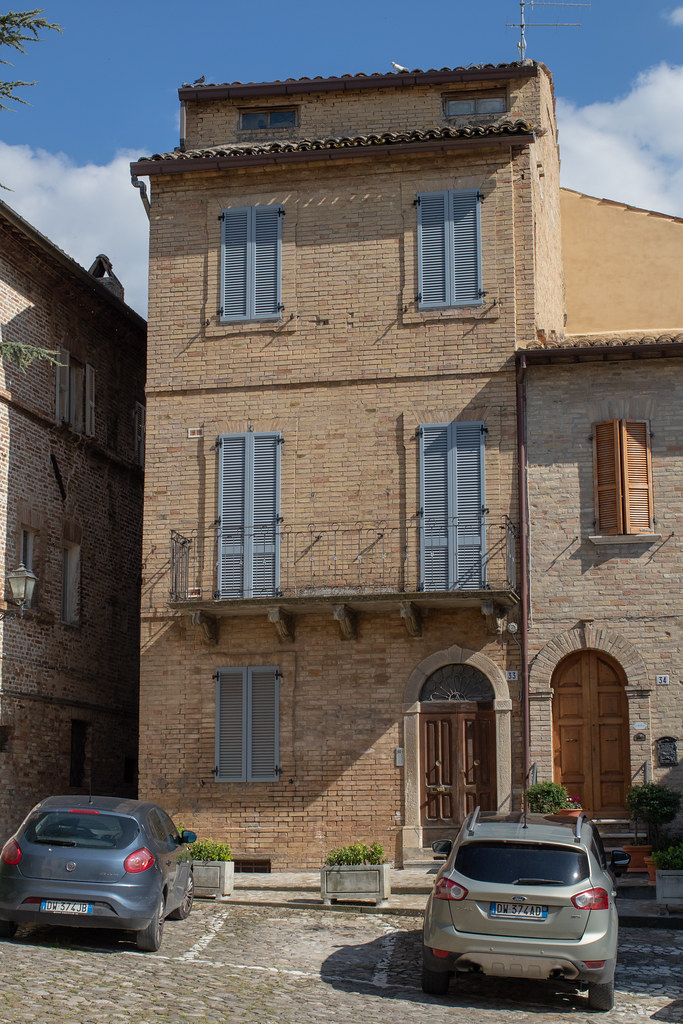 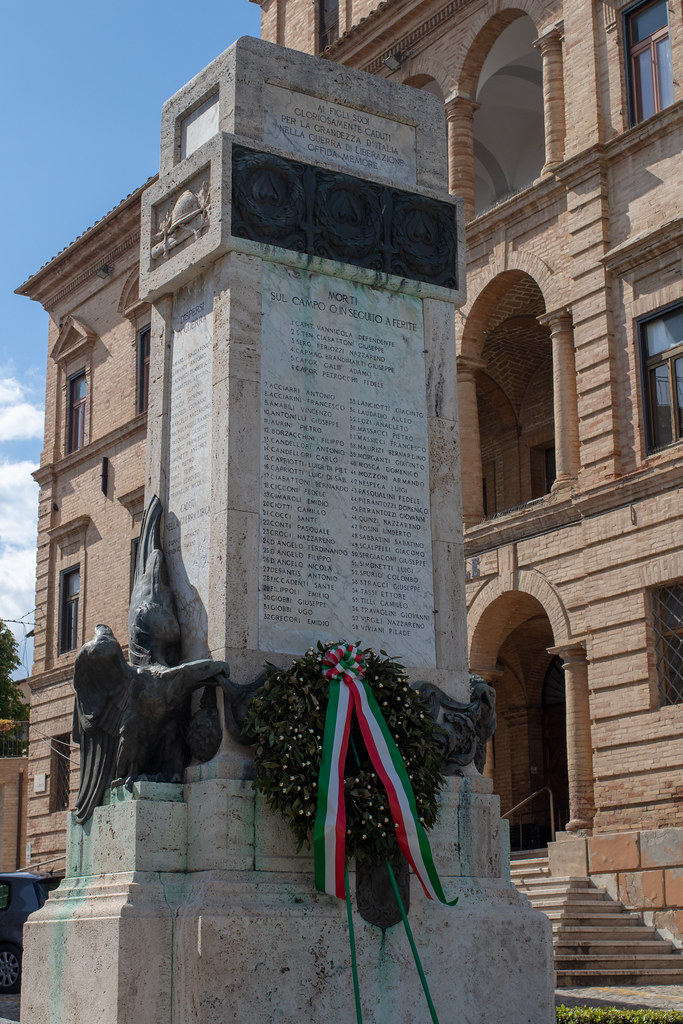 The city itself is very clean and neat, and I thought it was easy to do sightseeing with many shops. 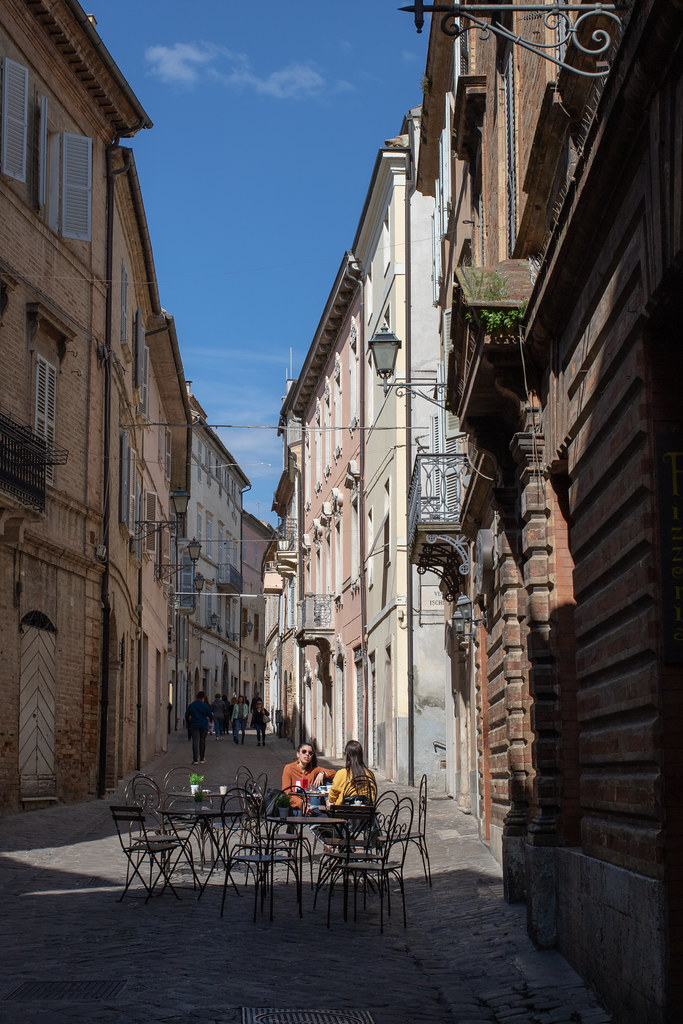 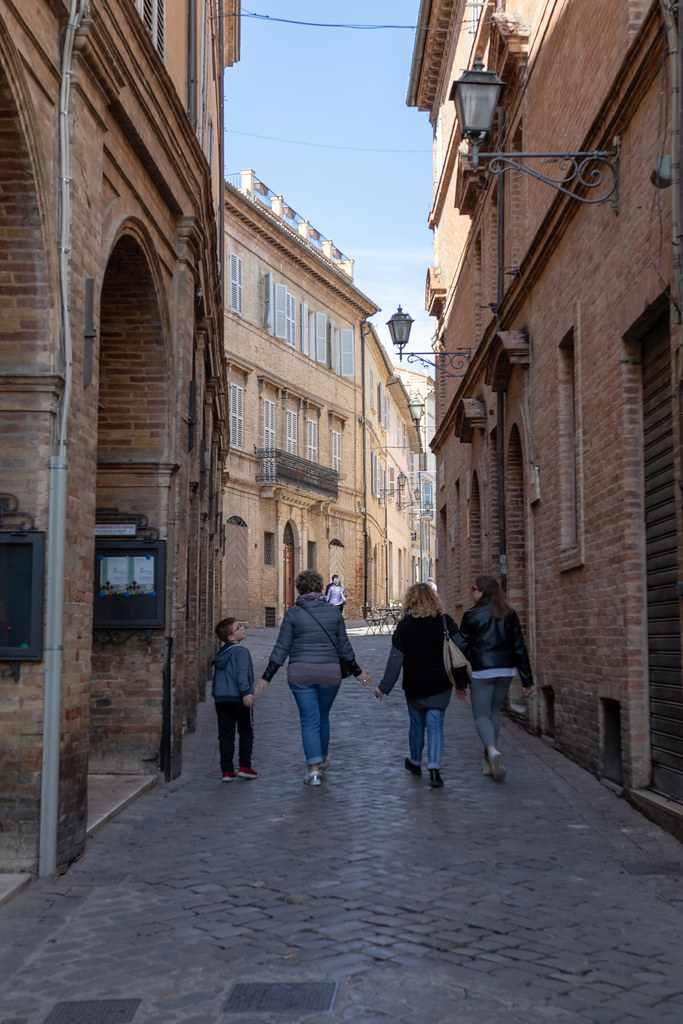 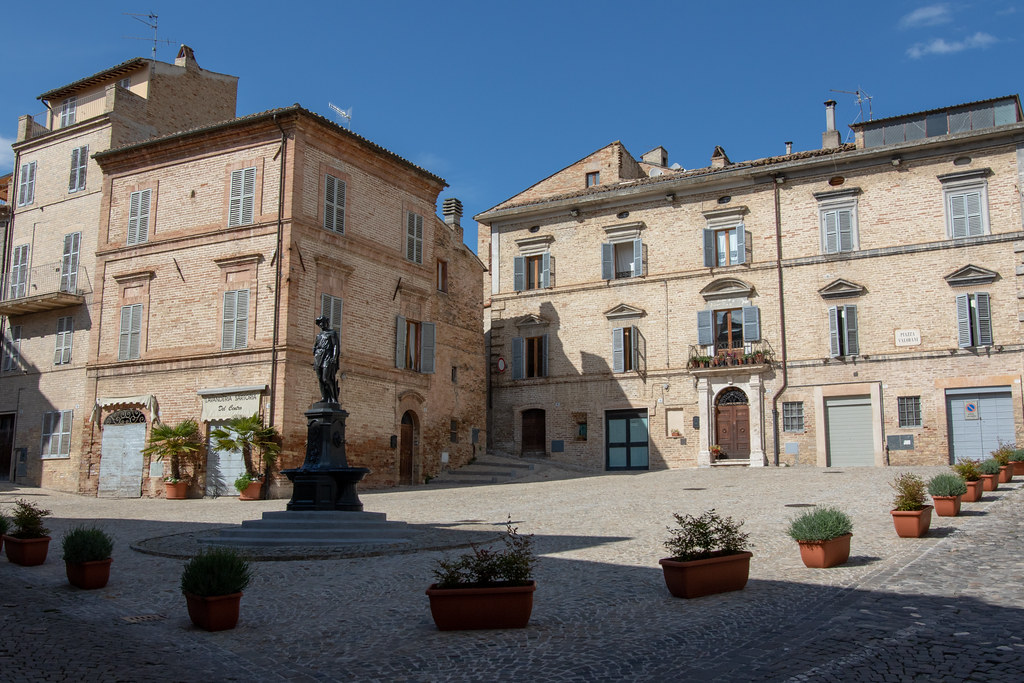 I didn’t see any accommodation facilities when I walked around, but it looks like a great place to stay for the food and wine, not to mention the scenery.

Finally, as mentioned above, the area around Offida is covered with vast vineyards. Therefore, this village is also a major wine production area. Terre di Offida is a D.O.C.G. in the Marche region of Italy. Originally called « Offida » in the D.O.C., the name was changed to the current « Terre di Offida » when it was promoted to D.O.C.G.

There were enotecas everywhere in the village. However, we had already bought a lot of wine in Tuscany, so we decided not to buy it this time. 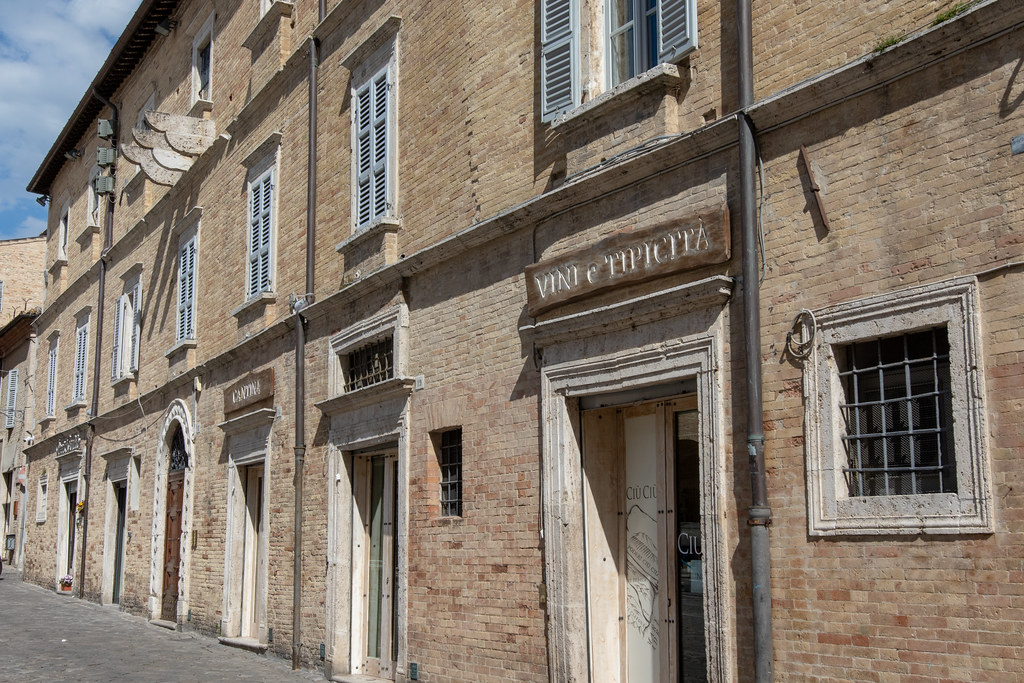 By the way, I just found out by researching to write this article that there was a church called « Santa Maria della Rocca » (Santa Maria della Rocca Church) on the outskirts of the village, which is a characteristic church architecture in Marche. I had missed it. It was very regrettable. Even though this village was a relatively big place, we missed a tourist information center there. We wanted to visit many places anyway, so our research for each place became too much. This is what I have learned through visiting beautiful villages in the past 10 years.

The church of Santa Maria della Rocca is something I could have easily found out by looking up this village on wikipedia, so from now on I’ll always look at wikipedia when I get to that village, as it’s fine locally.

Our energetic tour of the day’s beautiful villages ends here. After this, we will go to the town of Ascoli Piceno, more than 10 km away. This is where we will be staying for the rest of the day. We have a meeting with the caretaker of the apartment, so we will hurry our journey.

2014 GW is all about « Touring Italy’s Most Beautiful Villages » Gotta check out the local flavors!

This is my annual GW trip. (I'm going to Reunion Island at the end of this month, and this is France.Now that we've comp...

Local time: May 2, 2014This day is focused on a tour of the beautiful villages of central Sicily. There are three beauti...

Date and Time of Visit: September 12, 2017, approximately 5:00 p.m.This is the third beautiful village in German-speakin...

Vierves-sur-Viroin – Tour of the most beautiful Walloon villages No.7 -★★★★☆