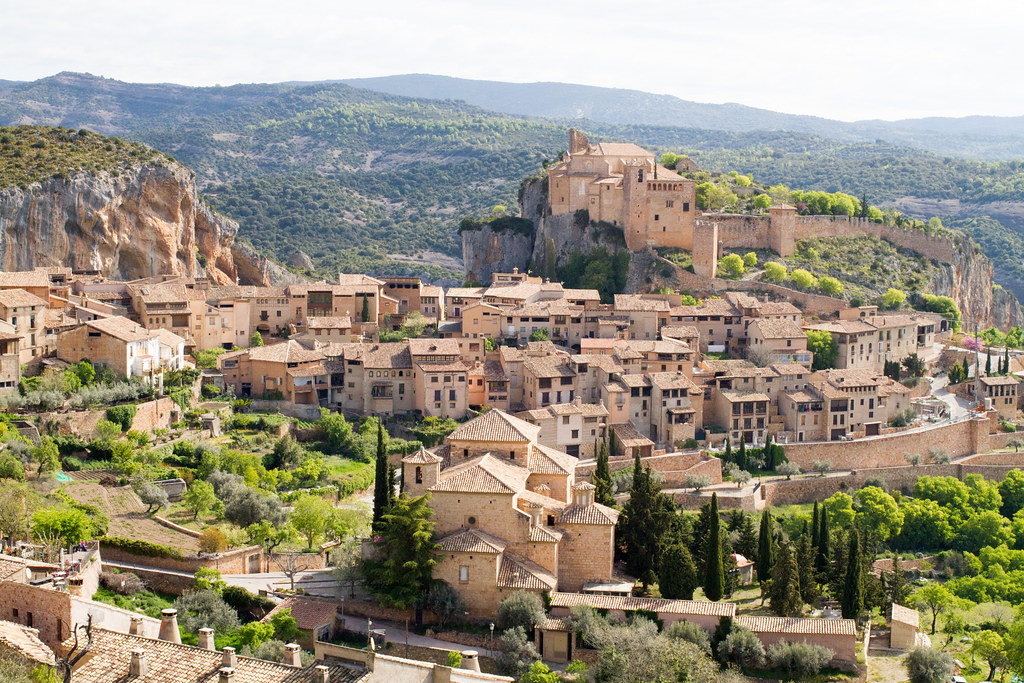 I would say it was the No. 1 beautiful village we visited on this trip.

The last stop and accommodation of the day

Two world heritage sites and one beautiful village on this day. All of them are very worth seeing and it was a great day. However, as the distance between each spot was quite a bit, we left Ainsa (the beautiful village we visited just before) at 7pm and decided to stay at the next place we visited. As usual, I made a reservation on Booking.com, and it was not so difficult to make a reservation as there were many accommodations there.

So, I chose one of the most beautiful villages in Spain, « Al Quesal » as a place to stay for this day. This village, as well as other beautiful villages in Aragon, was founded as a natural fortress (by the way, the name of the village « Al Quesar » means « The Fortress » (Al Qasr, La Forteresse in French)) during the Muslim rule. After the Christians recaptured the city, more and more settlers came to the city, and the Counselor’s Church was built, and the city became what we see today. 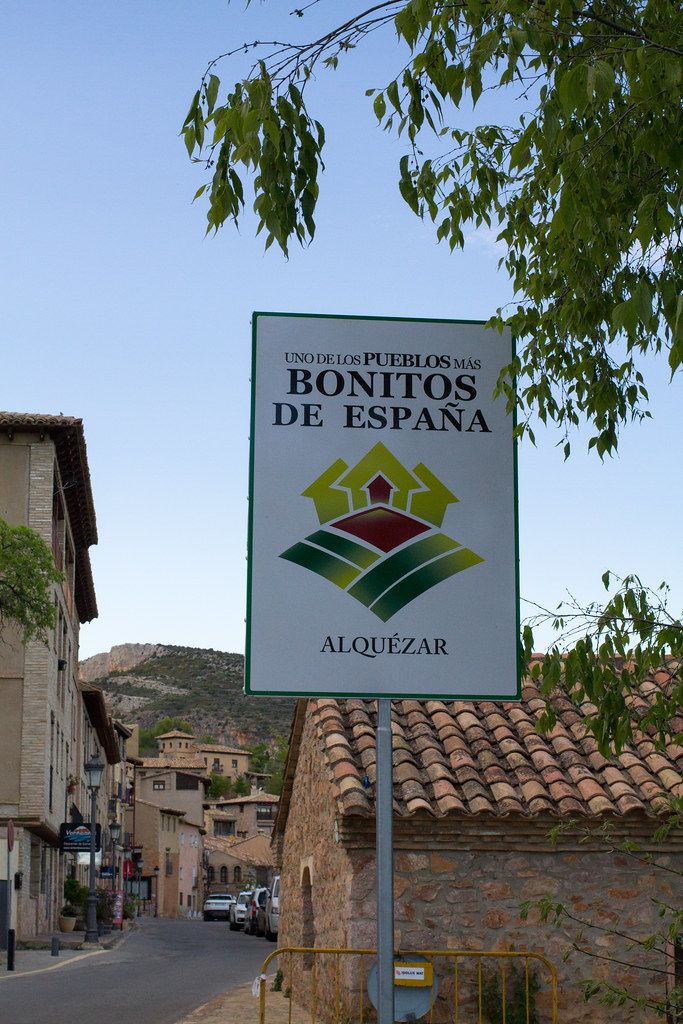 We arrived just before dusk, found a parking space right at the entrance of the village, parked the car there, and walked to the inn with the minimum amount of luggage for our stay. As soon as we started walking, we were greeted by this sight! 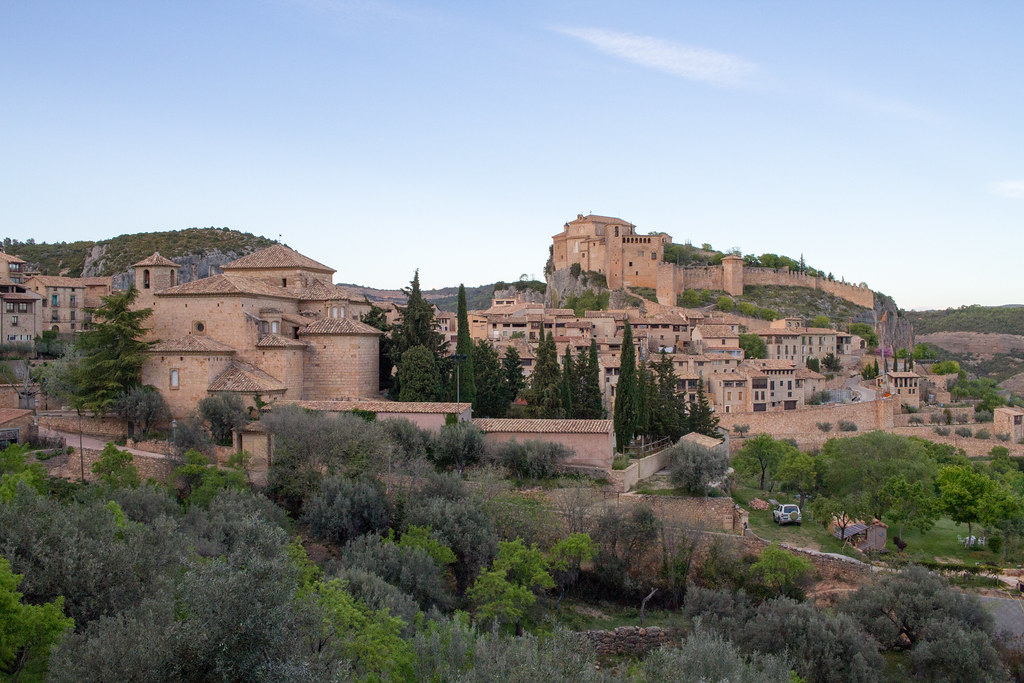 This looks very promising. Anyway, we went to the hotel. The hotel is supposed to be along this street, so the view must be outstanding. 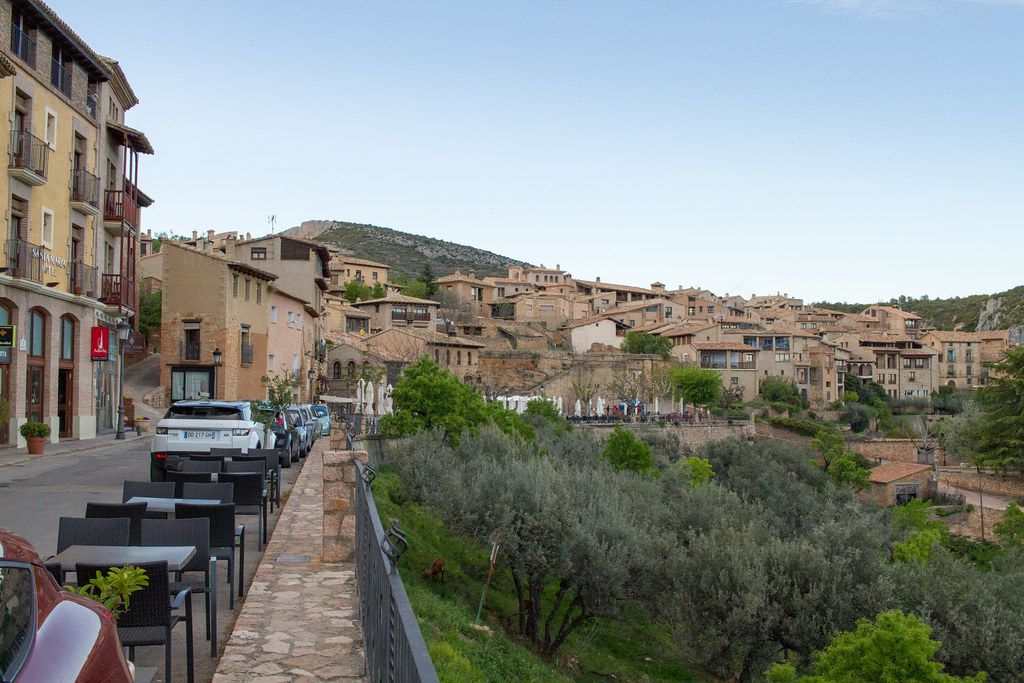 Arrived at the hotel. Since it was off season and weekday, there were only a few groups of tourists as usual. I don’t know well, but I was guided to a room like a girl. Well, I’m used to staying in a canopy bed, so I don’t mind and enter the room.

Great view from the hotel! 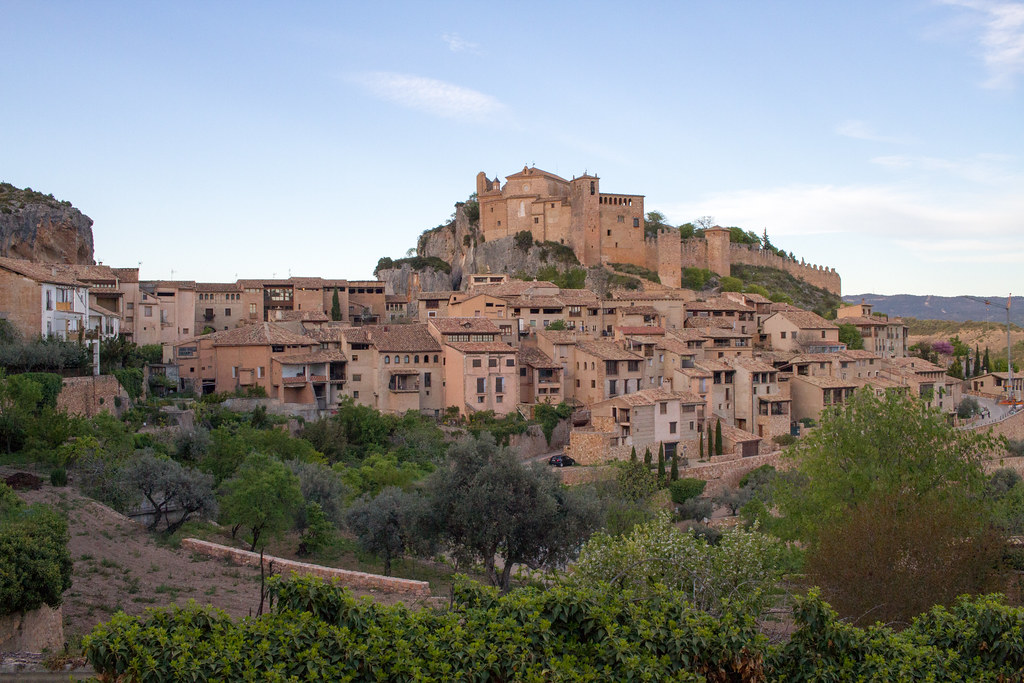 At any rate, I was hungry. Beautiful scenery is important, but food is also important. There didn’t seem to be many restaurants, so we decided to go to this restaurant which is located next to the hotel. This photo was taken the next day. 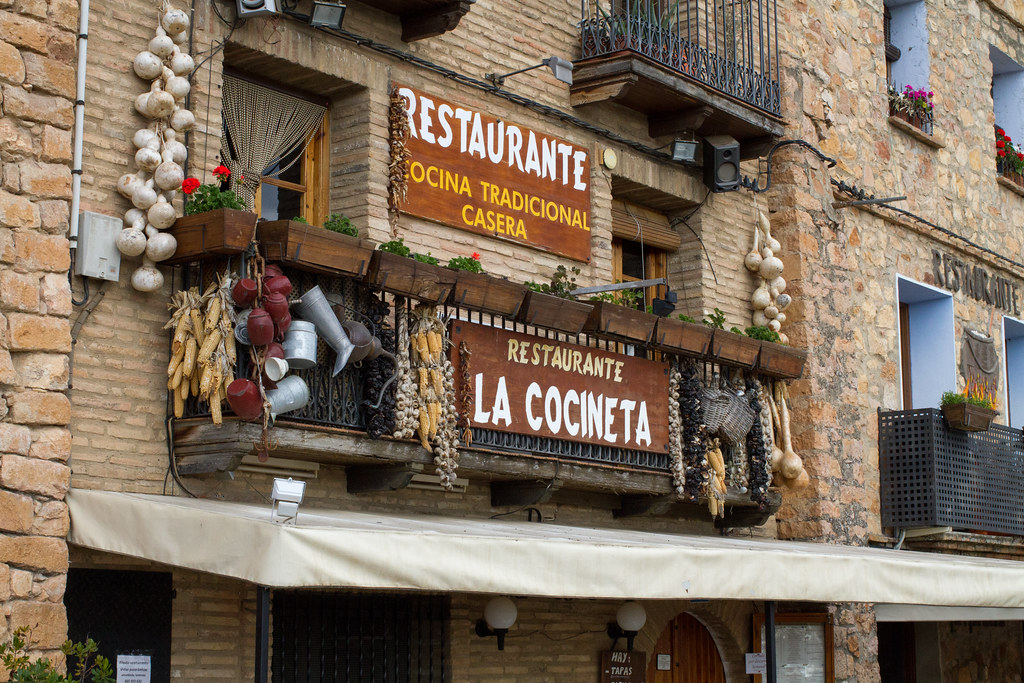 This was the only place that was open, probably because many places were closed that day. On TripAdvisor, there were a few places that were better than this one, but they seemed to be closed. However, this restaurant was not so bad.

Spain is famous as a production area of wine as we know, but of course there is no example and this Aragon state also produces a lot of wine. I don’t know much about the details, so I asked for a local wine at random, and this is what came out. As expected!

Temprariño with plenty of fruitiness is the best, just like the Spanish countryside. By the way, I found such a mark of wine street everywhere in the city.

Well, for the meal, I didn’t really know what to order, so I ordered the menu of the day, which looked the most gorgeous in the restaurant. It was still about 30 euros. Anyway, I was hungry that day and wanted to eat a hearty meal. We had local ham, salami, and I think the main course was grilled suckling pig. We also had soup (consommé) and dessert.

We enjoyed ourselves very much, we had a full stomach, and we had a feast. Then we went back to the hotel, took a shower and went to bed. It was a good day.

The next day, take a leisurely stroll through the village

I woke up the next day feeling fine. I ate too much and drank too much the day before, and I felt a little hungover, but I have a lot of time to spare on the 27th, so I’m sure I’ll recover if I take it easy and do some sightseeing.

In the morning, the village of Arquesal, seen from the window, is as beautiful as ever. 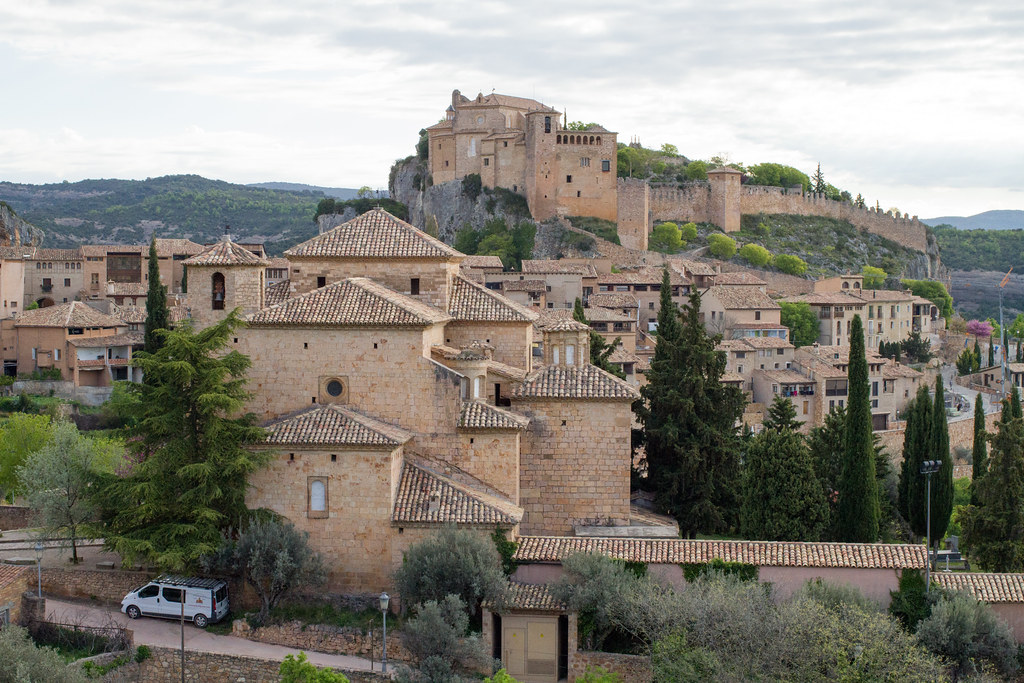 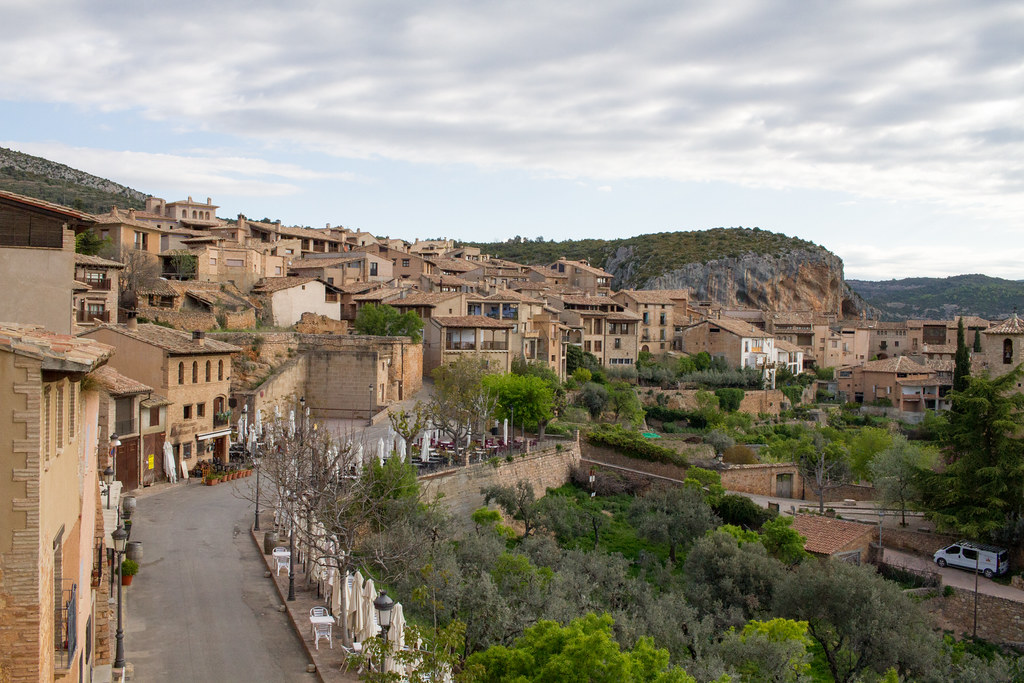 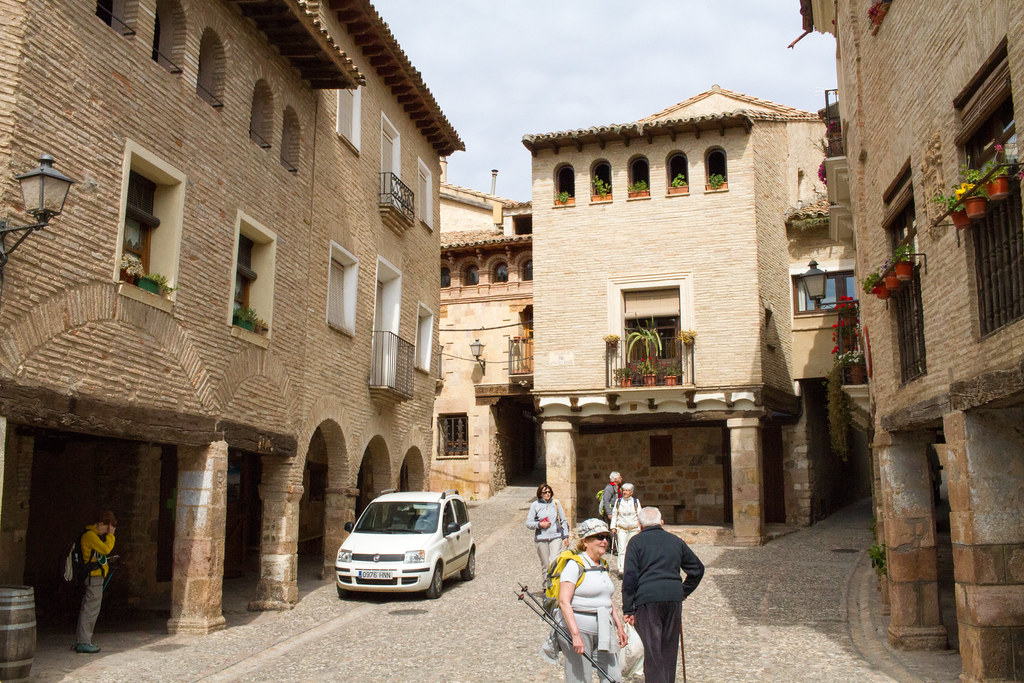 Well, we started exploring the village in the morning of the next day after a night because we arrived late the day before.

Check out of the hotel at about 9:30, once back to the car and put the luggage, slowly walk around the village. The tourist information center is not open yet, so we will walk around at random. 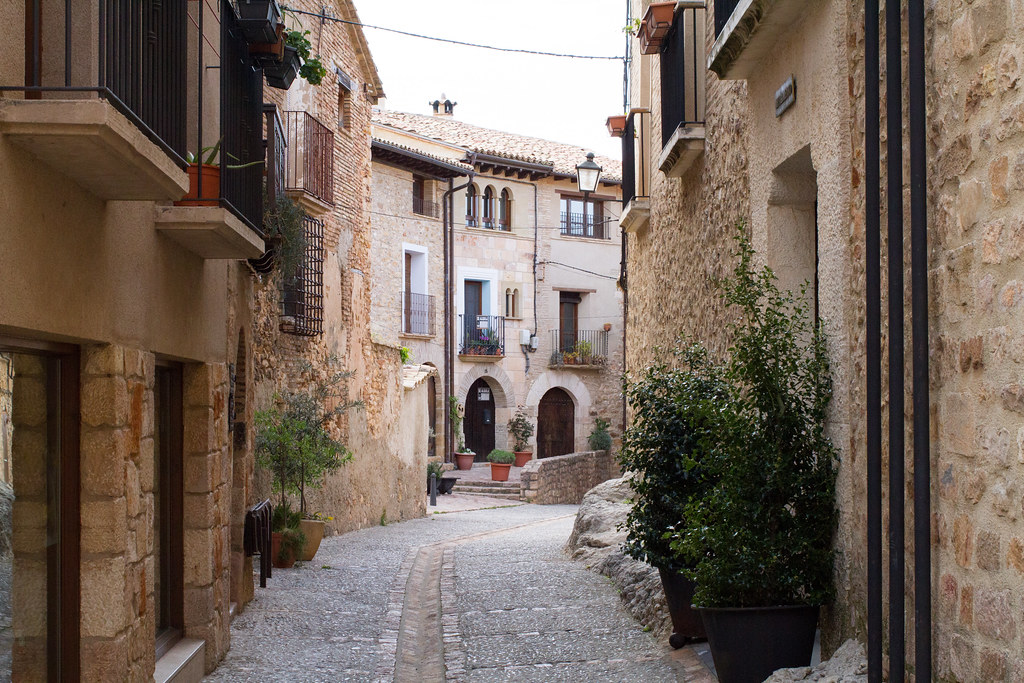 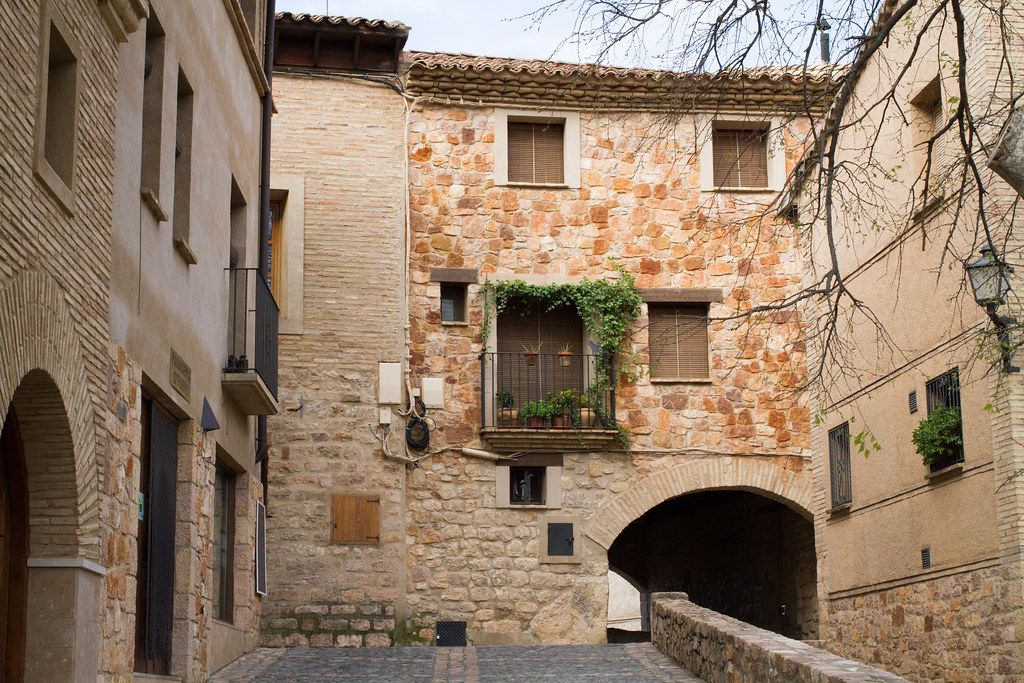 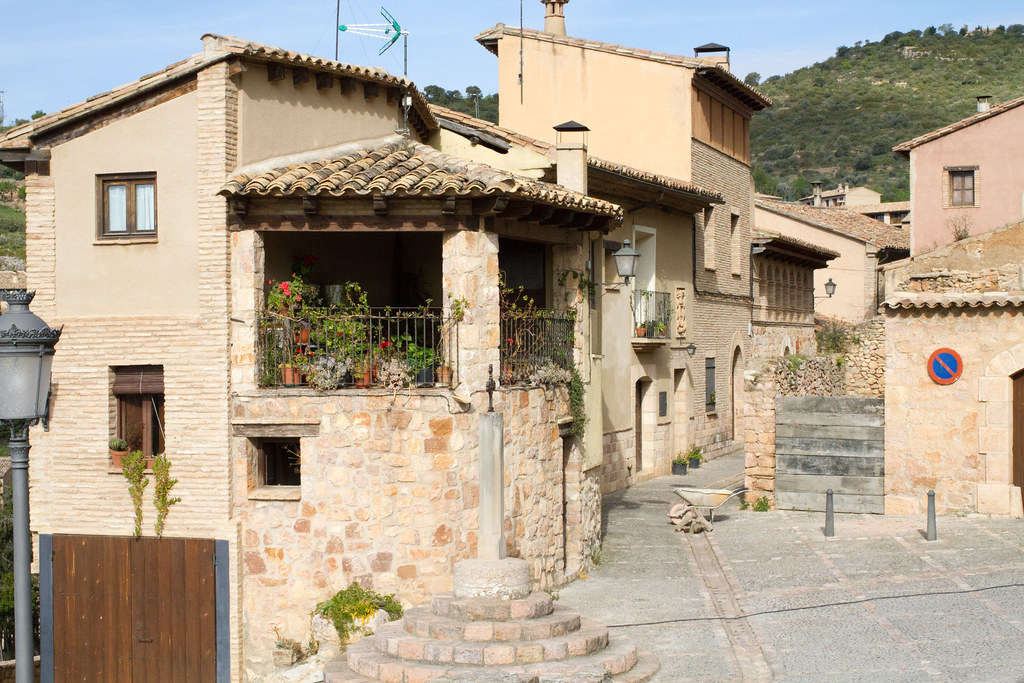 The fortress, located on a hill, which is the origin of the village, became a mansion of the lord of that time in the 16th century, and it has remained as it is now. And now it is owned by the village, tourists can see the inside. 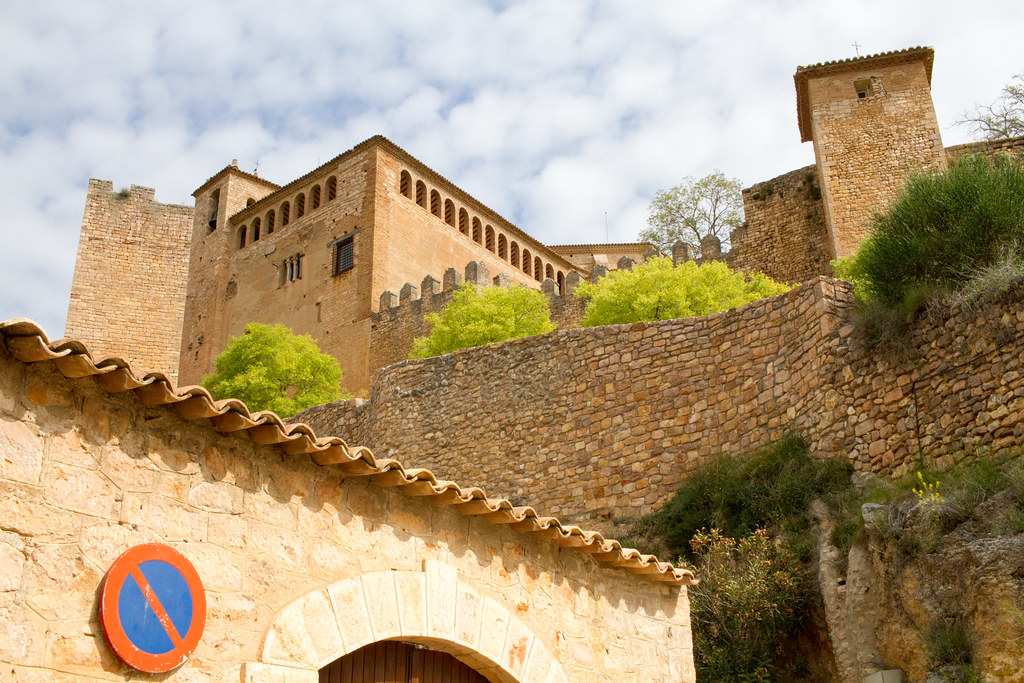 But still, it’s 11am to 2pm in the morning and 4pm to 7pm after siesta. Is it really 6 hours work? Or maybe it’s 8 hours work including siesta.

Great view from the hill.

So, since there was still some time before the lord’s mansion opened, I decided to go back to the car and drive to the higher ground of the city. When I moved from the house of the lord to the parking lot, I suddenly felt like going to the toilet (* obviously the effect of eating and drinking too much yesterday lol), but fortunately the hotel that took care of me last night was on the street, so I borrowed the toilet there and got rid of it. There was a public toilet in the village, but it was crowded with students (high school students?). But I couldn’t go in because it was crowded with students.

Now, I went back to the car and went to the high ground on the opposite side of the river from the lord’s mansion. The potential of this town is still amazing.

In addition, because the parking lot was more substantial than the side of the hill here, I did not have trouble parking.

A good amount of time had passed while I was admiring the spectacular view, so I decided to return to the lord’s mansion. I wonder if it will open on time… 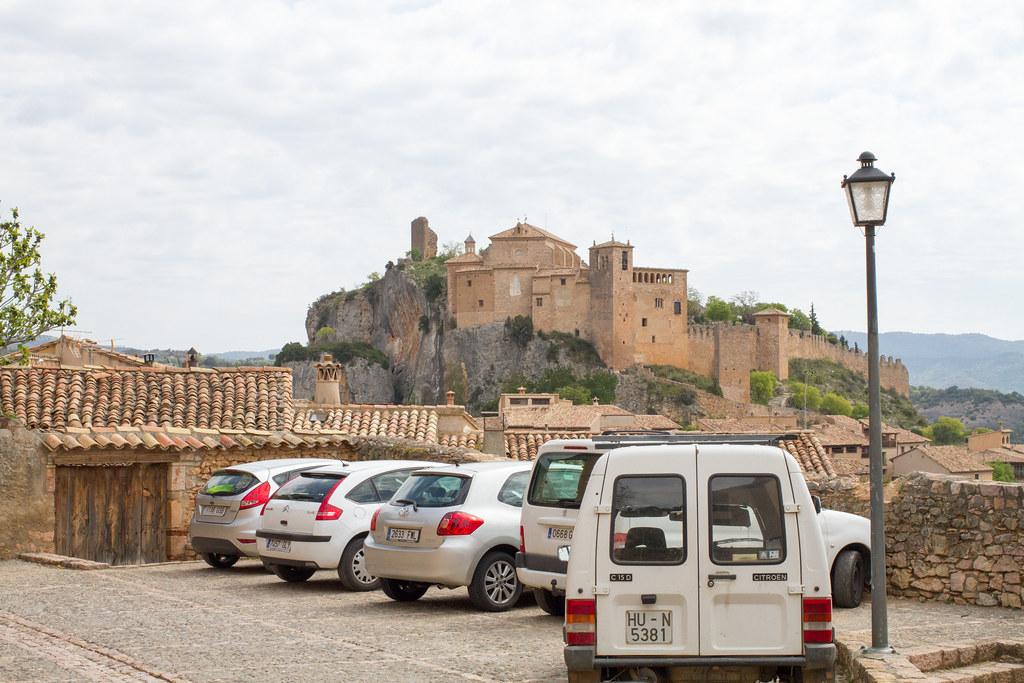 Is there a UNESCO World Heritage Site?

By the way, when I got to the hill, I noticed that there seems to be a world heritage site here. It seems that there are prehistoric murals left. I have no idea where it is, so I decided to check it out later at the tourist information center. There are too many things to see. What a village! Even the most beautiful villages in France don’t have this much to offer. 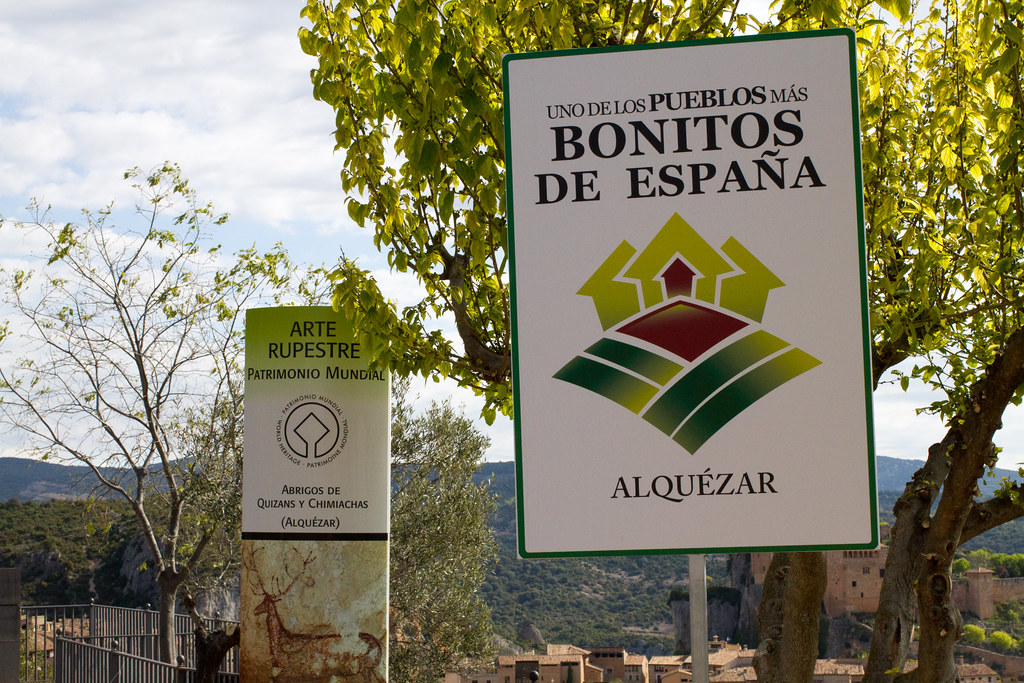 The lord’s mansion is also worth seeing.

At around 10:55, we arrived at the lord’s mansion again, but at 11:00, still no one showed up. I wondered if the door would not open, but a local man came a few minutes later. I asked him to unlock the entrance of the lord’s house and decided to follow him without telling him. I was the only tourist who was waiting for the opening.

Then we arrived at the museum. It costs 2 euros to visit. We got a simple English guide and visited the inside. It was surprisingly worth seeing. The cloister is very beautiful. 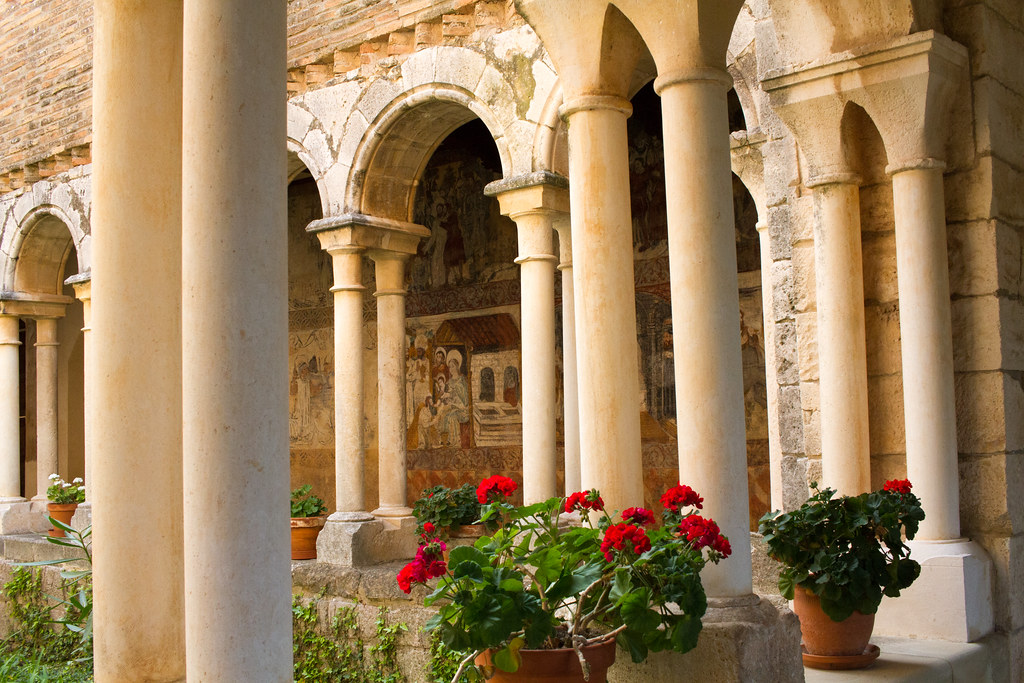 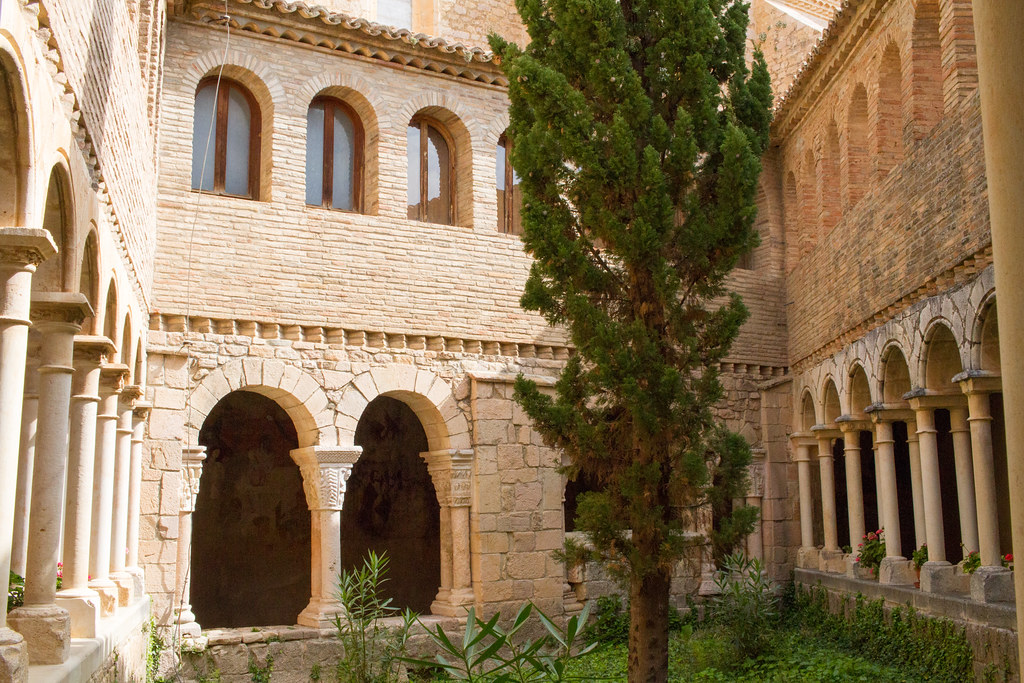 Its walls were constantly covered with religious paintings with a sense of history. 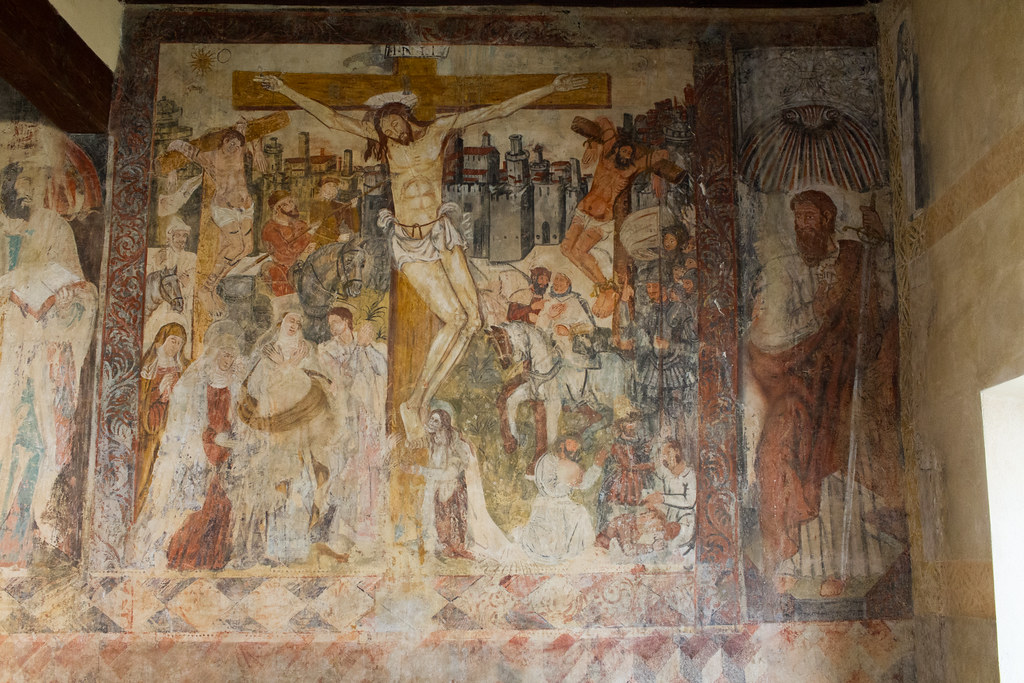 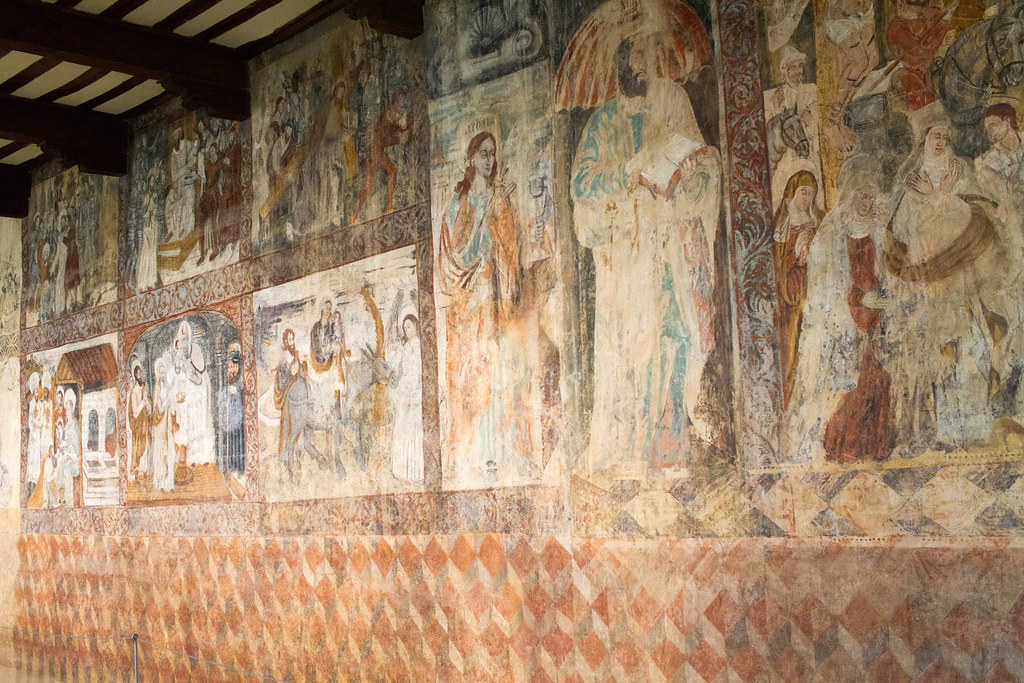 The adjacent cathedral was also wonderful. There was also a magnificent pipe organ. 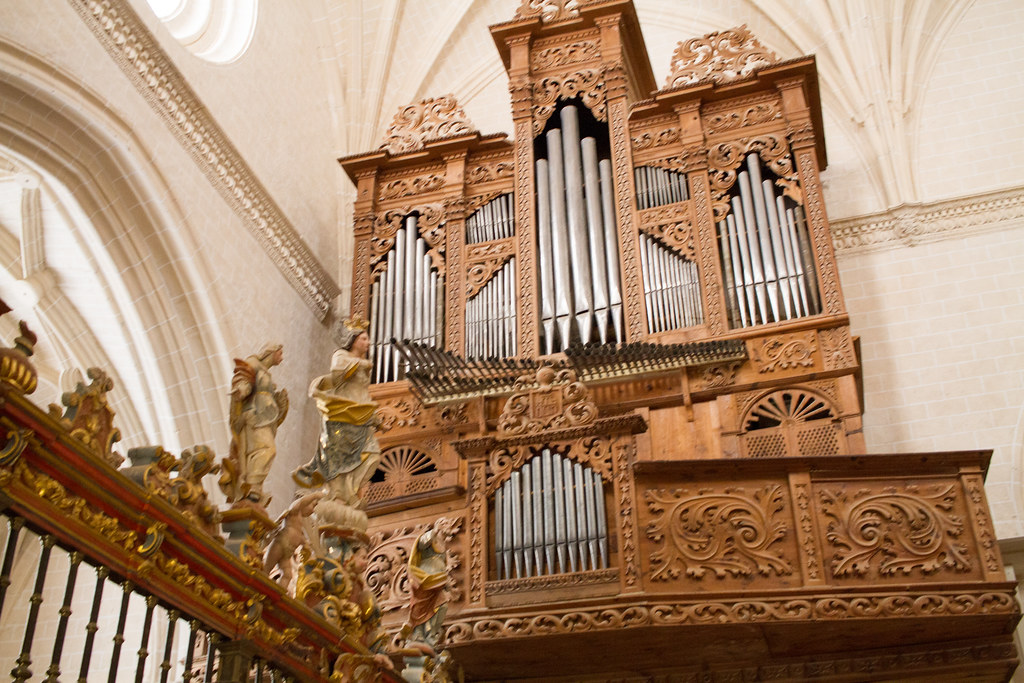 And we were able to go to the second floor of the building. 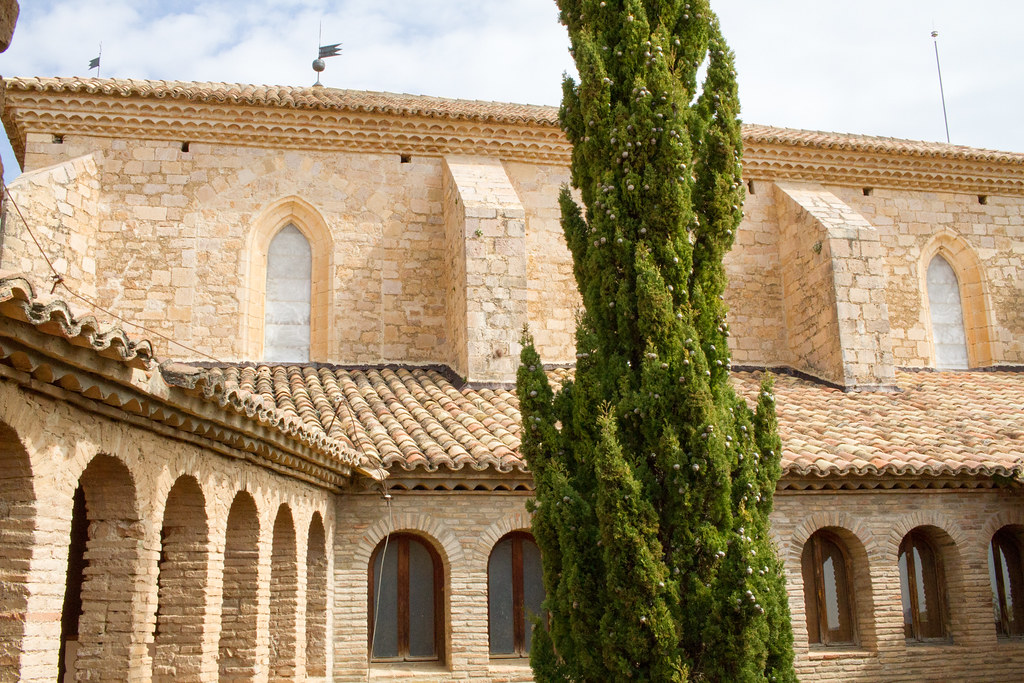 In one of the small rooms upstairs, there is a little museum. 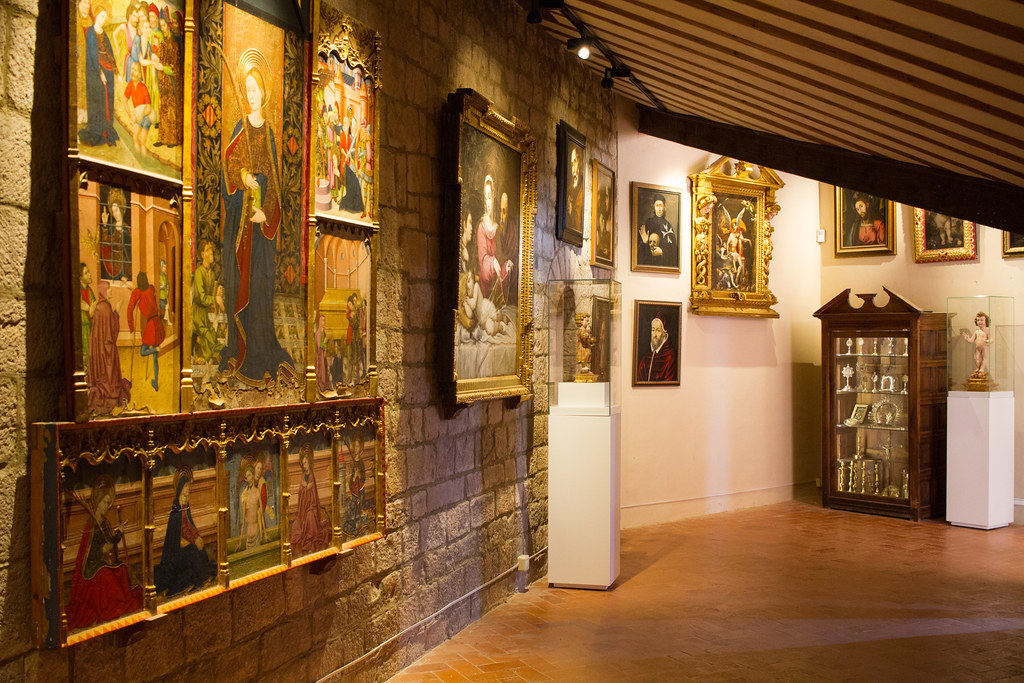 After finishing the tour of the lord’s house, we went to the tourist information center. Actually, it was next door to the hotel where we stayed, but it was only open from 11 o’clock, wasn’t it? Spain is slow and troublesome around here.

Here, I looked up the prehistoric murals, which are an example of a World Heritage Site. Apparently, they are all over the valley where the village is located, and there are many trekking trails to get there.

We had time, but we gave up trekking and visiting the mural this time because we didn’t bring shoes and so on. But I’m sure I’ll come here again.

In addition, I found some guidebooks of Aragon State in the tourist information center, so I decided to bring them back with me as a reference for the future. I’m also going to Zaragoza after this.

訪問日時：2019年5月4日、午前11時頃From Ascolipiceno in Marche, where we stayed the night before, we came two hours to Norcia, a beaut...