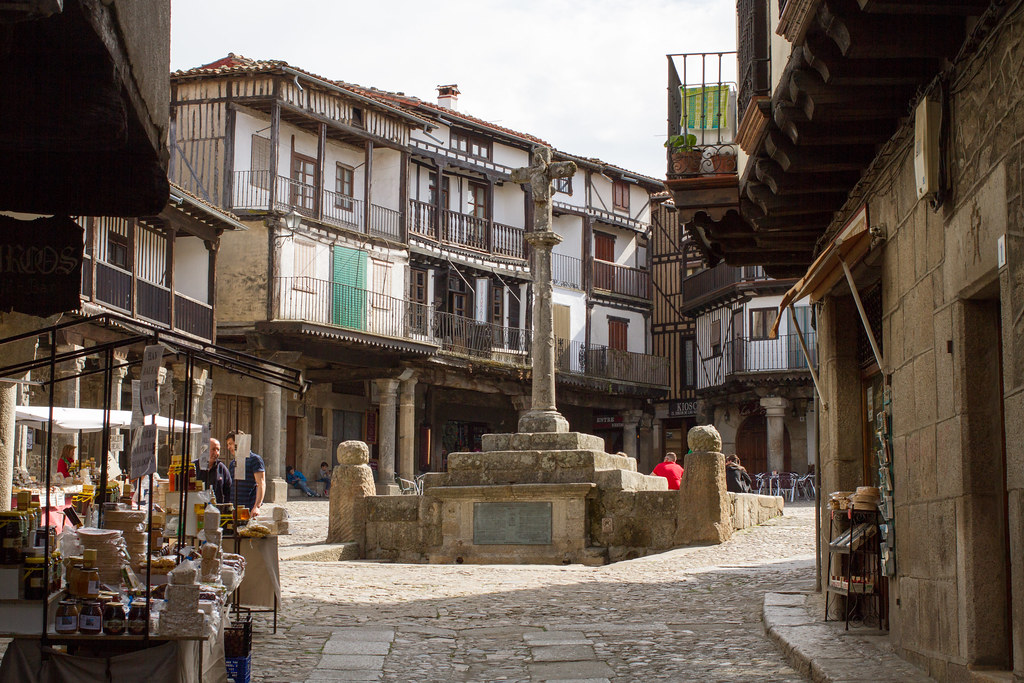 In the Francia mountain area in the west of Spain, there is a concentration of villages that have been chosen as the most beautiful villages in Spain. This « La Alberca » is already the fourth village we will visit this day.

If you look at the map again and see the villages we visited on this day and the ones we will visit and stay in later, you will see how many beautiful villages there are in this area.

I think it was less than half an hour away from Mogallas, the third village we visited just before. But as I expected, we spent a lot of time to visit so many villages in one day. It was already past five in the afternoon.

What kind of village is this, the official website here was convenient with multiple language support. What a surprise, Japanese too! But only the title was translated lol.

This village was already inhabited in this area since prehistoric times. It was in the Middle Ages, from the 12th to the 13th century, that it became a community called a village. It is said that people from Burgundy in France migrated to this area. This is a very common trend in beautiful villages. However, what is very different from the villages around Aragon that I visited last year is that they don’t have the atmosphere of a castle city of the Reconquista era.

After that, it developed as a village on the Santiago pilgrimage route or the silver road.

I was able to park at the entrance of the village because it was the time when it was just approaching evening. As far as I can see from the satellite photo of the village again now, there seemed to be no public wide parking lot at all. We had to park just outside the village.

There were many tourists because it was Saturday. I wonder if it’s because it’s so well known as an old village in this area as well as Moghalas. Because I saw several sightseeing buses even in such a small village.

After we parked the car, we went to the Plaza Mayor in the center of the city, and the alleyway to there was very beautiful. 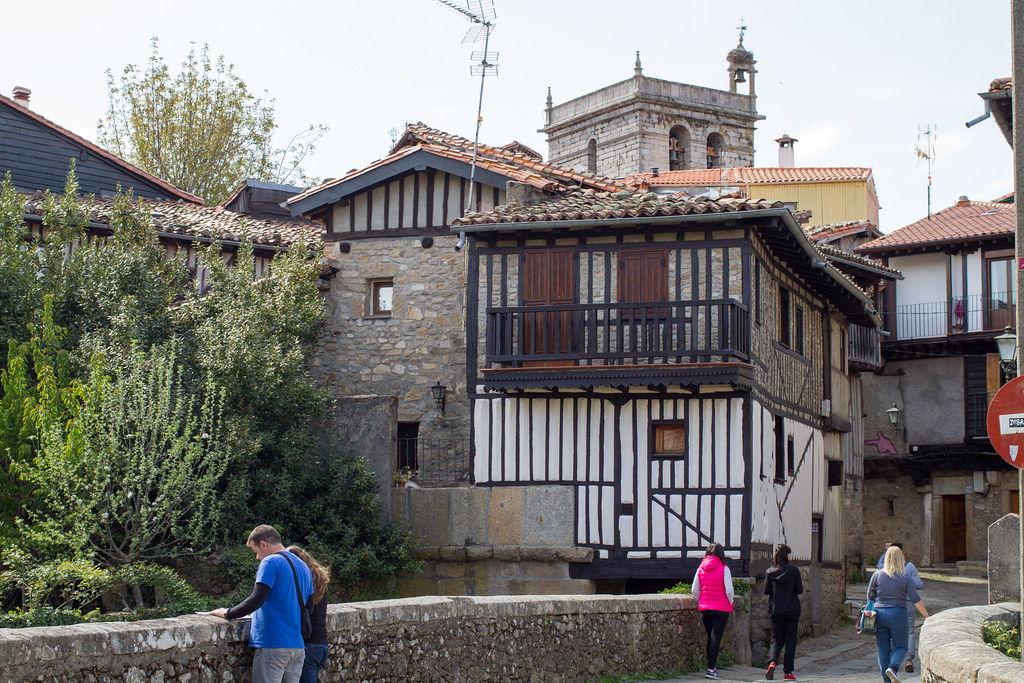 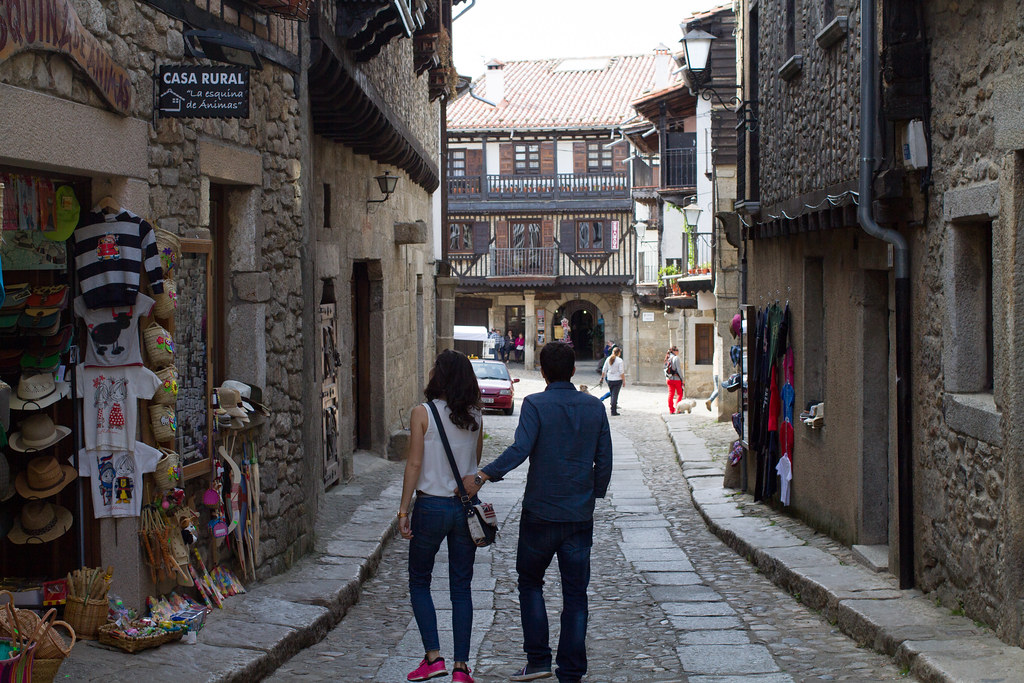 The atmosphere of the buildings in the village is almost the same as what you can find in Mogallas and other places. Since they are only 30 minutes away by car, it must mean that they have formed the same kind of culture. 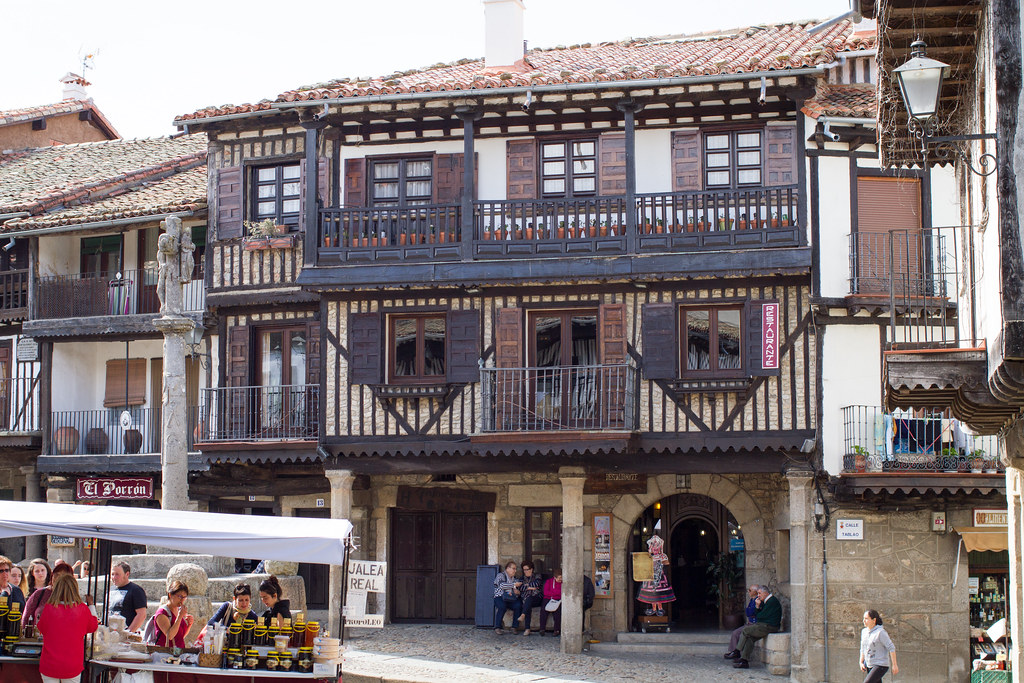 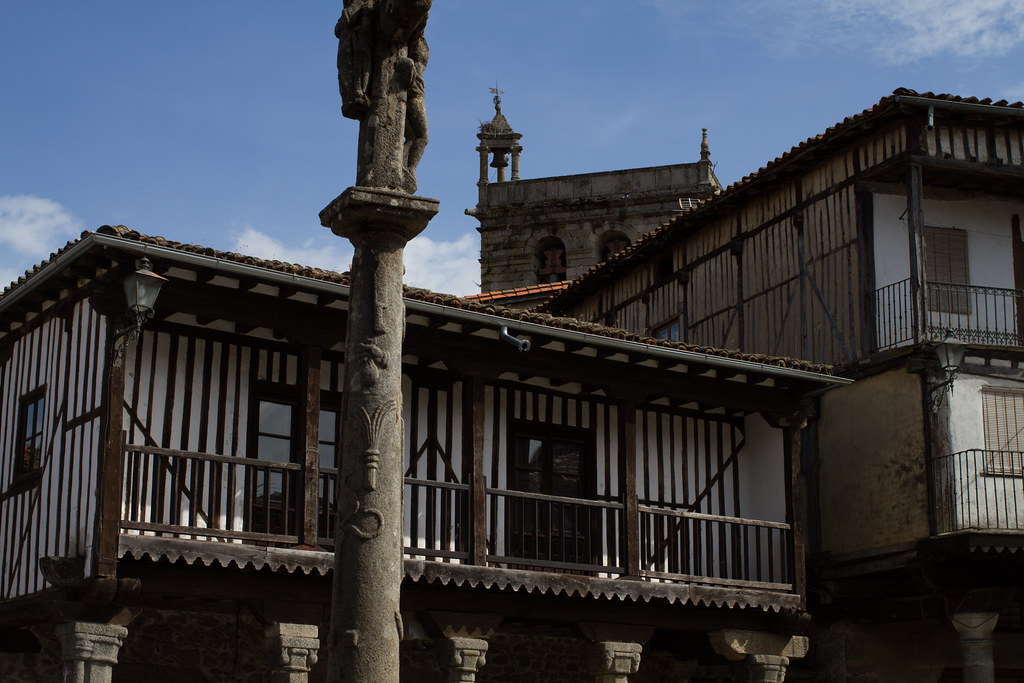 By the way, while the atmosphere of the building felt Spanish, I thought that the structure of the building was somehow similar to the buildings seen in some of the beautiful villages in Burgundy, such as Noyer. If you look at the official site, you will see that they have moved from Burgundy in France, so I guess that has a lot to do with it.

The Plaza Mayor is small but has a very quaint atmosphere. I’ll introduce it with RICOH THETA which is newly introduced. 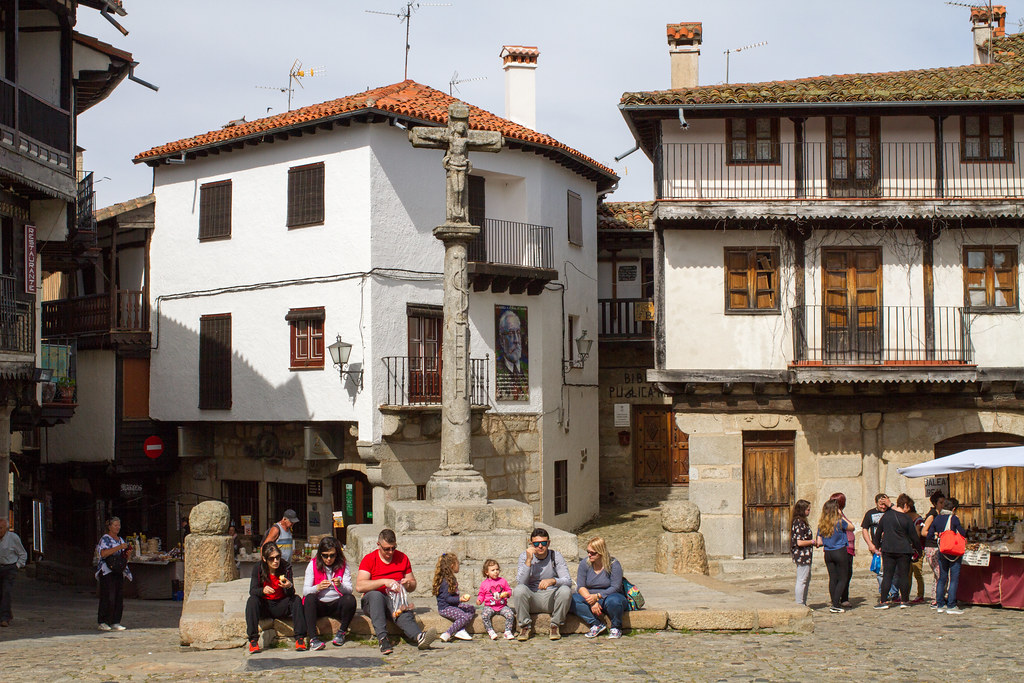 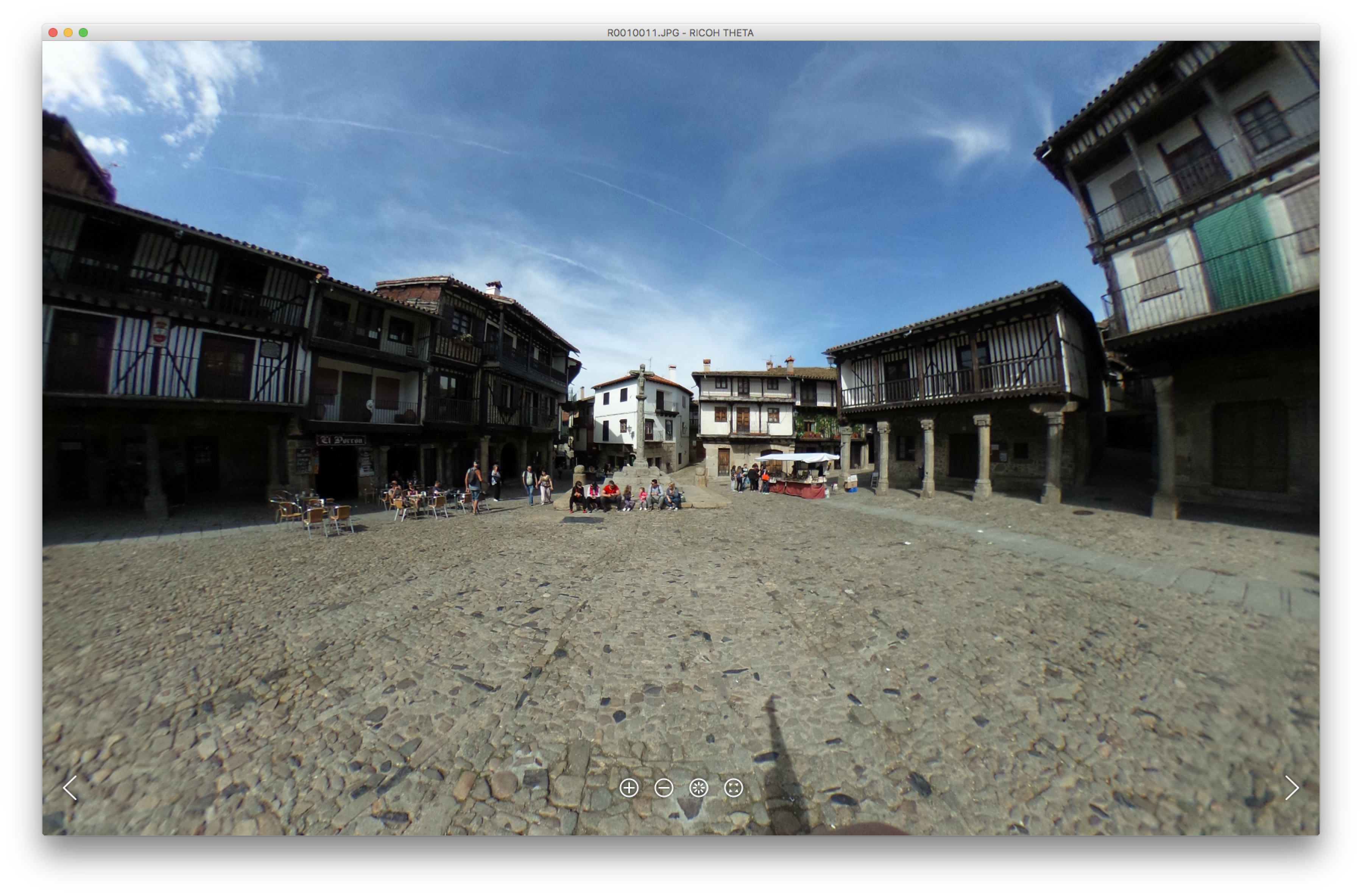 And this village was also full of Jamon Iberico. If anything, it seemed to be easier to « buy and eat » (in other words, there were sandwiches) than the village we just visited, so I thought I should have eaten ham here. But it was already past five o’clock, so it would have affected our dinner, so in the end, it was probably the right decision to have it in the village. 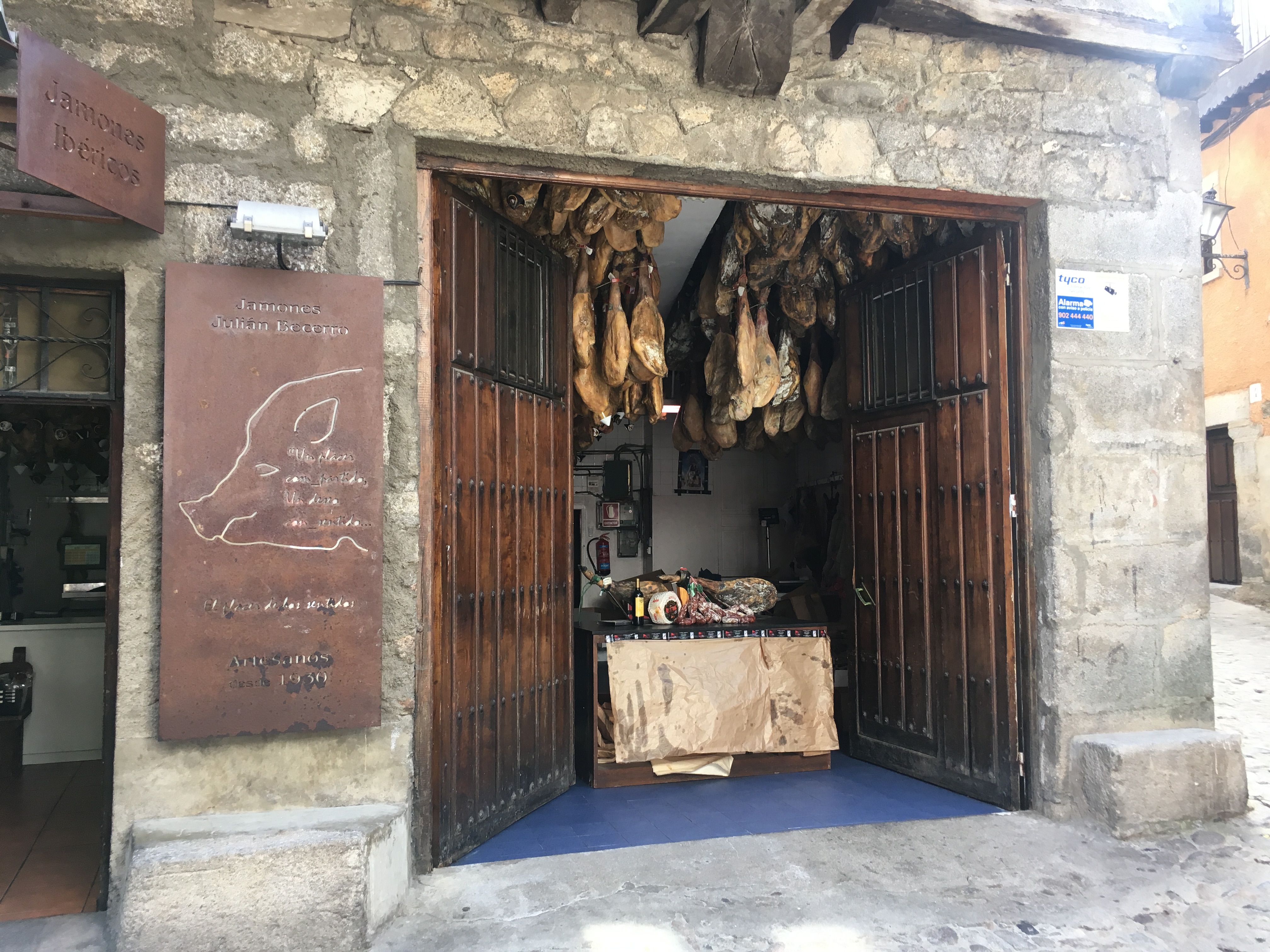 In addition, of course there was a church in the village, but somehow I forgot to visit it. I wonder what happened to me.

By the way, it’s not easy to buy a drink in Spanish countryside, as is often the case in villages and towns. If you’re thirsty, go to a café and relax, because it’s common here. However, there was a nice vending machine corner in this village. 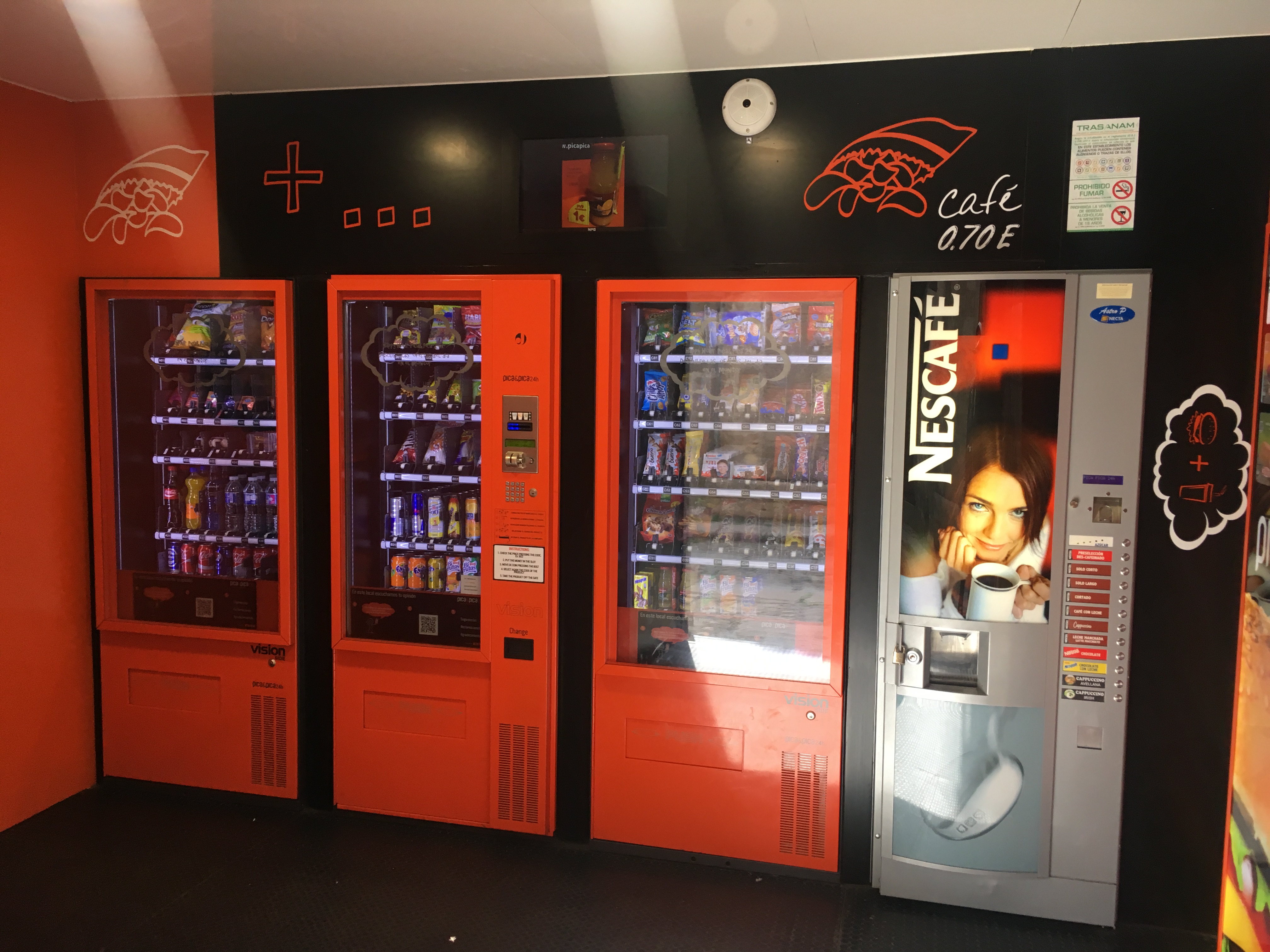 I just ran out of the water I bought at the airport, so this vending machine was really a mig to say. I wonder if the presence of such facilities is a sign of the large number of tourists.

We stayed for less than an hour, but we were very happy to enjoy the typical beautiful village. After this, we will move on to the next place, which is also one of the most beautiful villages in Spain, and we will spend the night here.

Trujillo, the most beautiful village in Spain No.25 ★★★★★

Visit date: September 18, 2017, around 2:00 p.m. The introduction of the most beautiful French-speaking villages in Swit...

Valangin (Valangin) Tour of the most beautiful villages in Switzerland No.19 ★★☆☆☆☆

Rent a car at Barcelona Sants station -2012 France and Spain

Now, after the F1 ship, the next day, you will be traveling in a rental car again.We rented a car at Sants Station, the ...
Mogarraz, the most beautiful village in Spain No.21 ★★★★☆
Ciudad Rodrigo – Tour of Spain’s most beautiful villages No.23 ★★★★☆
Page d’accueil
April 2017 western Spain and Portugal of the journey
タイトルとURLをコピーしました