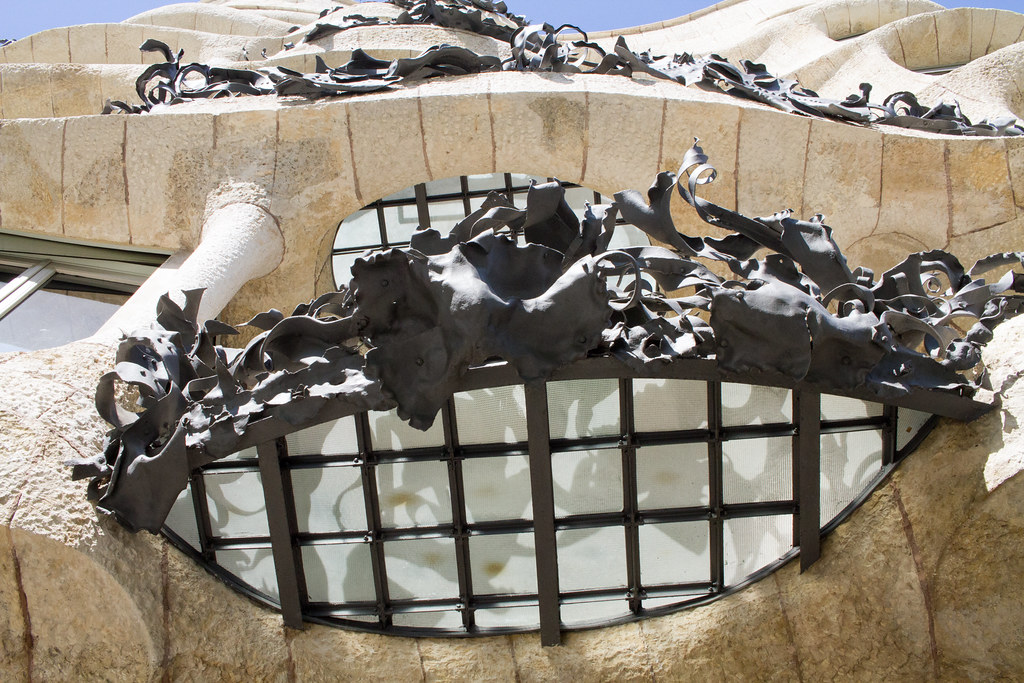 I came back to Passeig de Gràcia by bus from Parc Güell, which was empty because you need a reservation now. This Passeig de Gràcia is the busiest street in Barcelona, I guess. Both sides of the wide street are lined with world-famous brand shops.

Casa Mila is located along the main street. It’s a big building with a very strong presence, so you can easily recognize it. 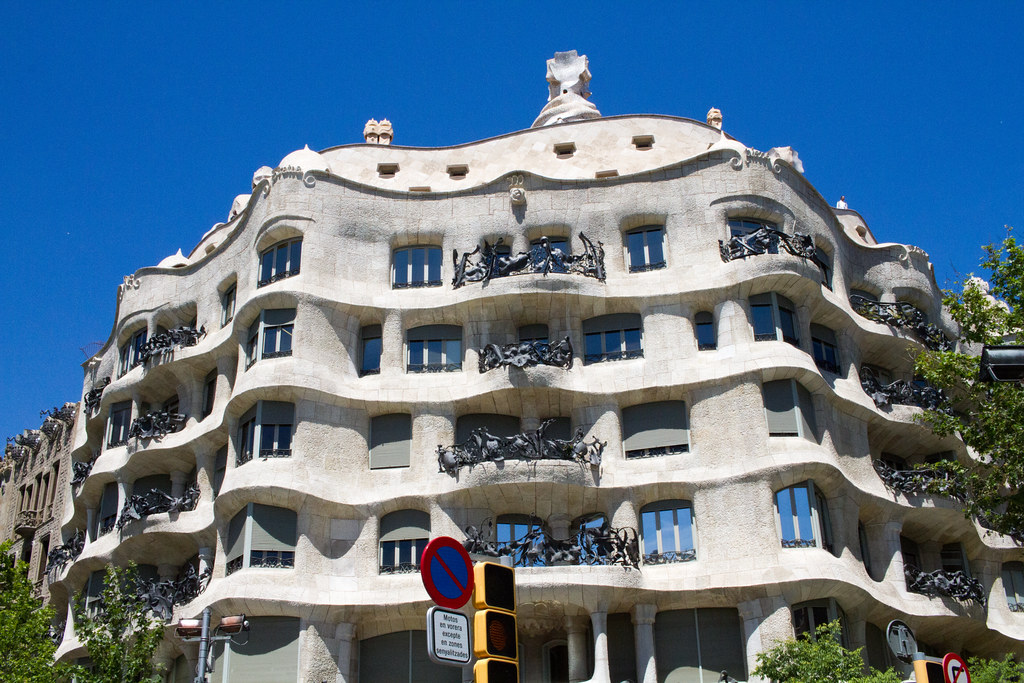 By the way, on the other side of the intersection, there is Casa Batlló. This place is also quite interesting, but the entrance fee is too expensive! Like La Pedrera, it costs almost 20 euros per person. It’s a little bit. Was Barcelona so expensive? Why don’t they make it a set?

This building is called « Casa Mila » or « La Pedrera ». As you can easily imagine from the name Casa Mila, it was built as a home and rental apartment for the industrialist Mila and his family. Gaudí was involved in the construction and design of the building in 1906, and it was completed about six years later in 1912. 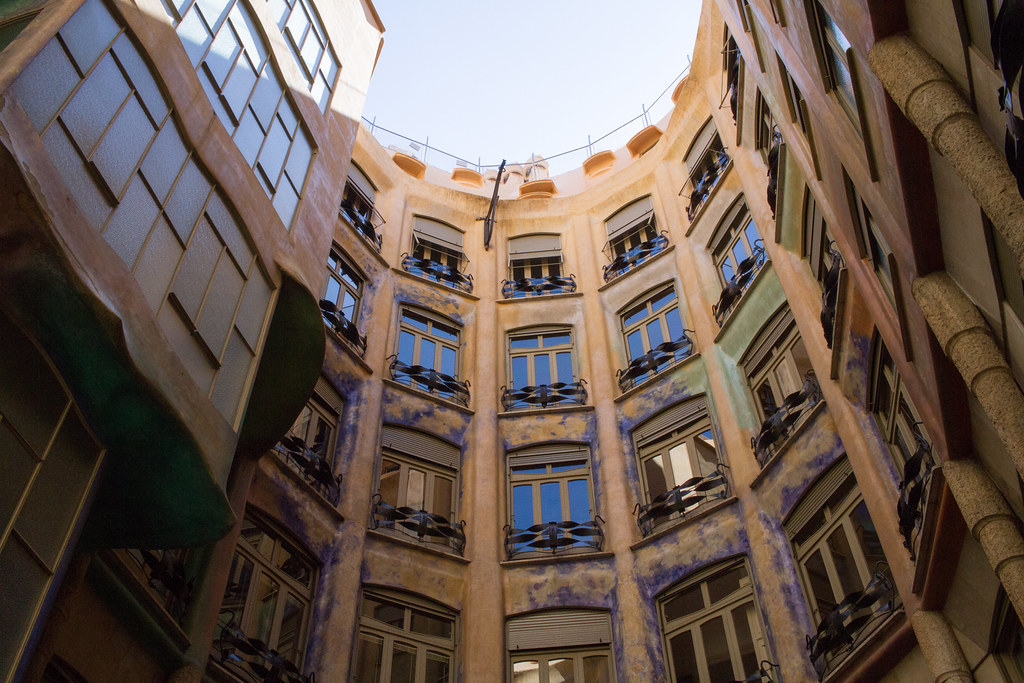 You can buy a ticket at the entrance to enter. It is expensive…

Maybe it was just a coincidence, but when we visited, we were able to enter without waiting in line too long. I guess it’s not as popular as Casa Batlló across the street.

First of all, we decided to head up to the rooftop terrace because you can climb up there. Of course there is an elevator, but for some reason we decided to take the stairs. Did we want to exercise?

Then we arrived at the rooftop. It’s not a very tall building, so I wasn’t too tired. The view is not so bad. 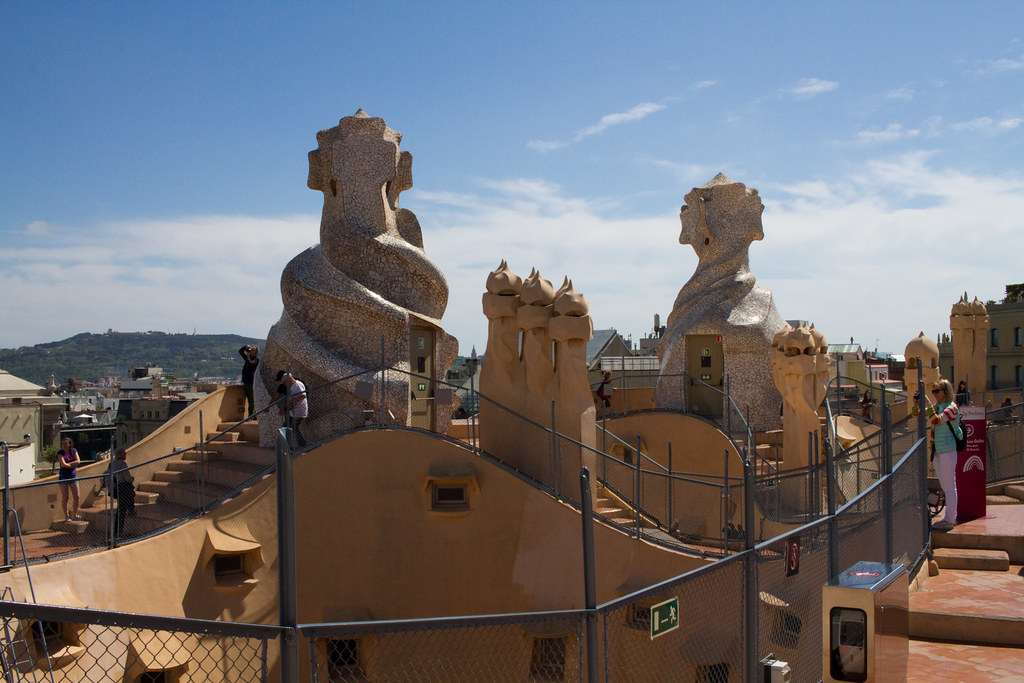 The intersection in the picture below is a big intersection, but don’t you think it’s simpler than the one in Japan? The pedestrian crossing is just marked with dotted lines. It’s nicer and cleaner this way. 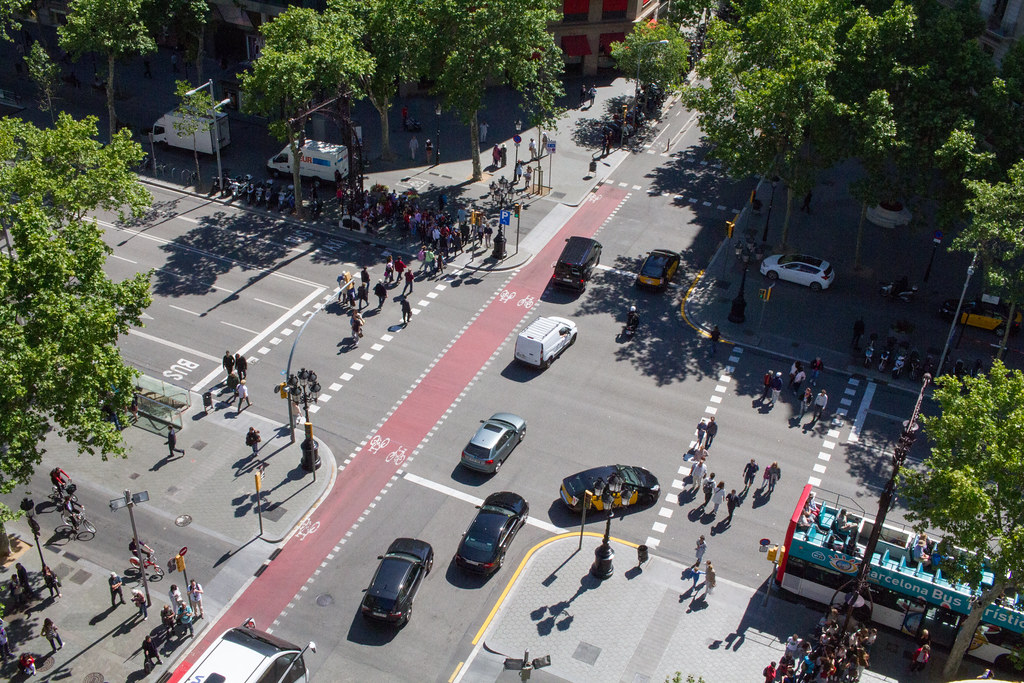 There was a very nice model of La Pedrera in the place where it was used as a storehouse for food and grain, just below the roof terrace, I think. We often see these models in these tourist spots, buildings, castles, etc., but I thought this one was particularly magnificent. 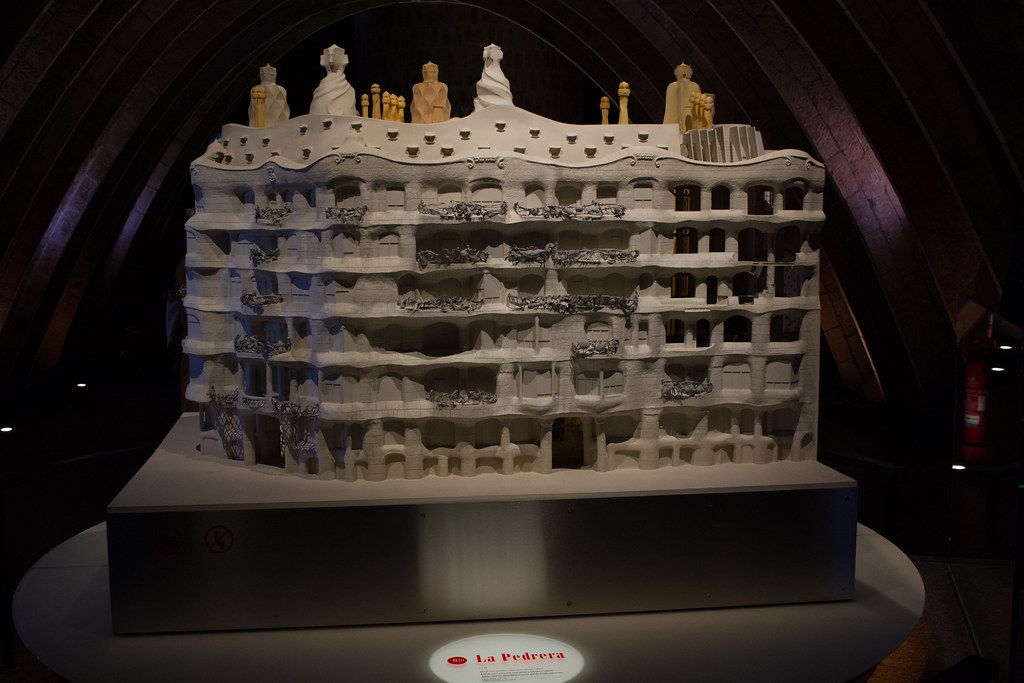 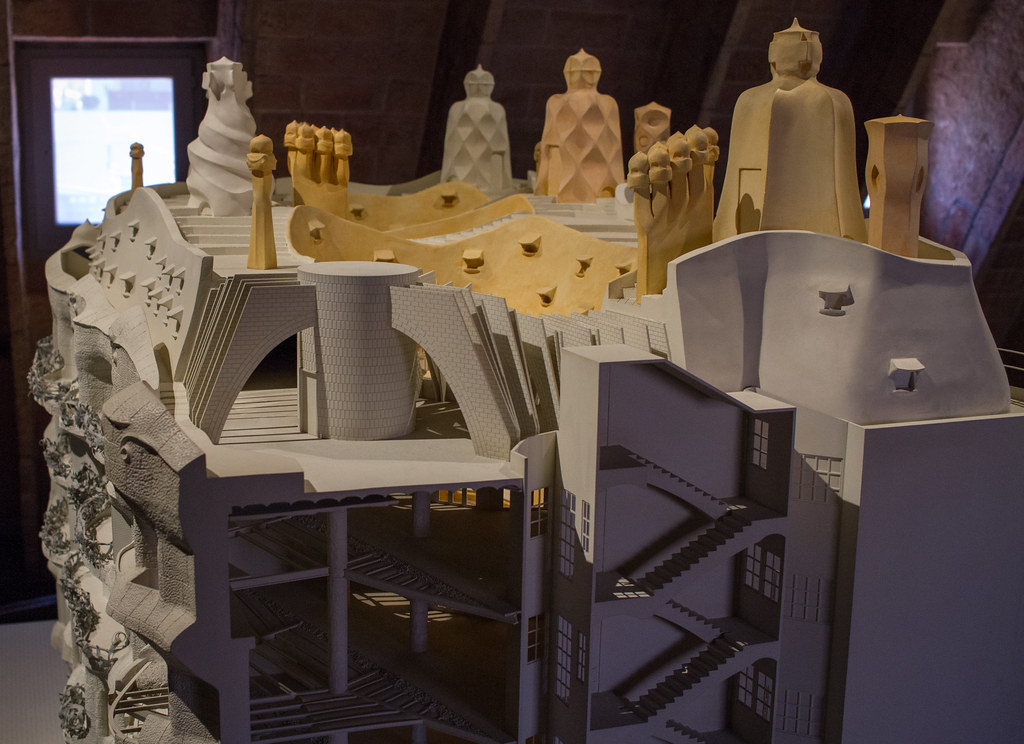 The exterior of Casa Mila is magnificent, but the interior displays only a few pieces of furniture and kitchen utensils related to life in those days. 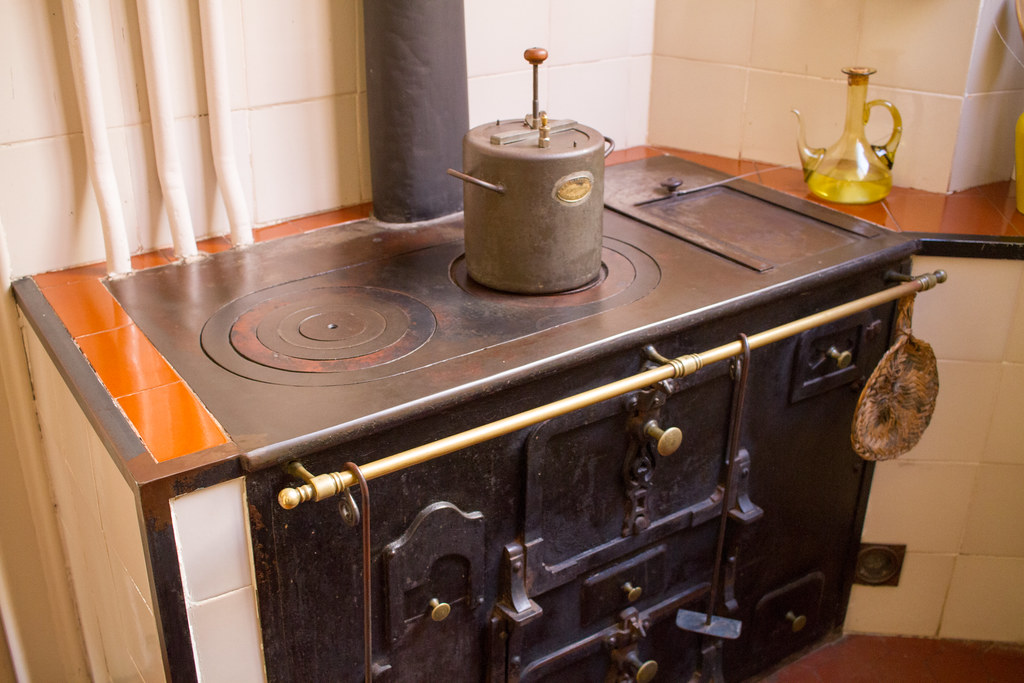 The viewing time is about one hour. 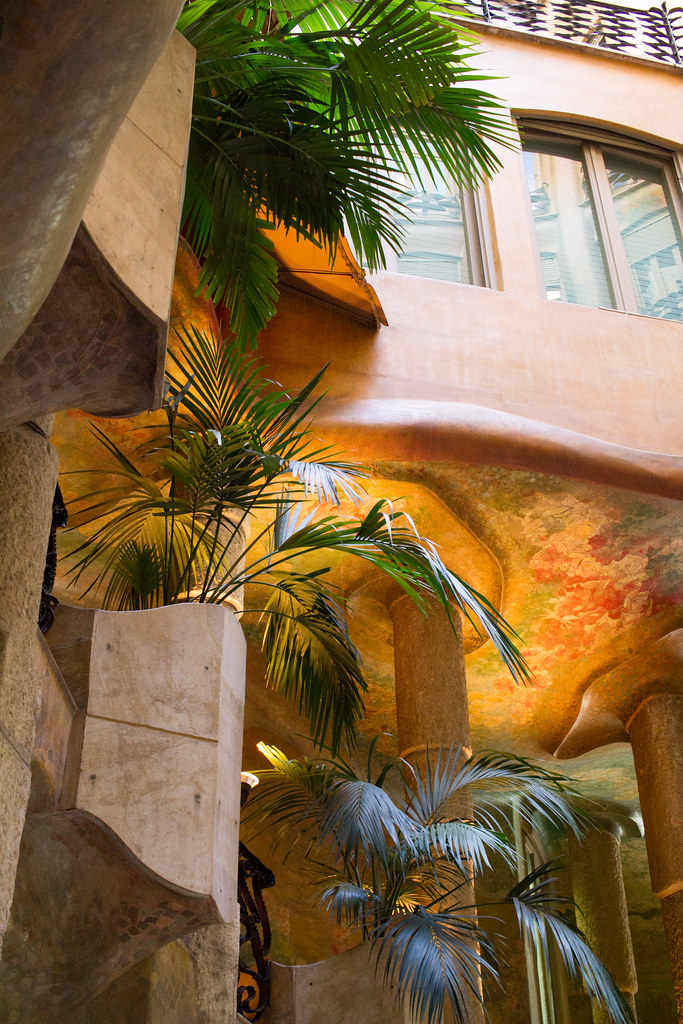 The souvenir shop at the exit was like a museum shop, and I think it was very well-stocked. However, we didn’t buy anything. I think the interior of this shop has changed, but I remember it was well-stocked when I visited there 12 years ago. I remember I bought a mug here. I would never buy such a thing now.

Then in 1992, yes the Barcelona Olympics were held. (Note: I checked later and it seems so. (Note: I looked it up later, and it looks like it.

To be honest, I don’t remember it being that interesting, but I think it was a great way to learn about Gaudi and Barcelona thanks to this game.

When I was a child, I learned about Picasso from Gakken Manga in a bookstore, and I was very interested in Spanish art, so I naturally became interested in Gaudi.

Gaudi’s buildings in Barcelona are very famous, but there are other Gaudi buildings outside Barcelona. The ones in Astorga and León on the Santiago pilgrimage route are famous, and I visited them four years ago. 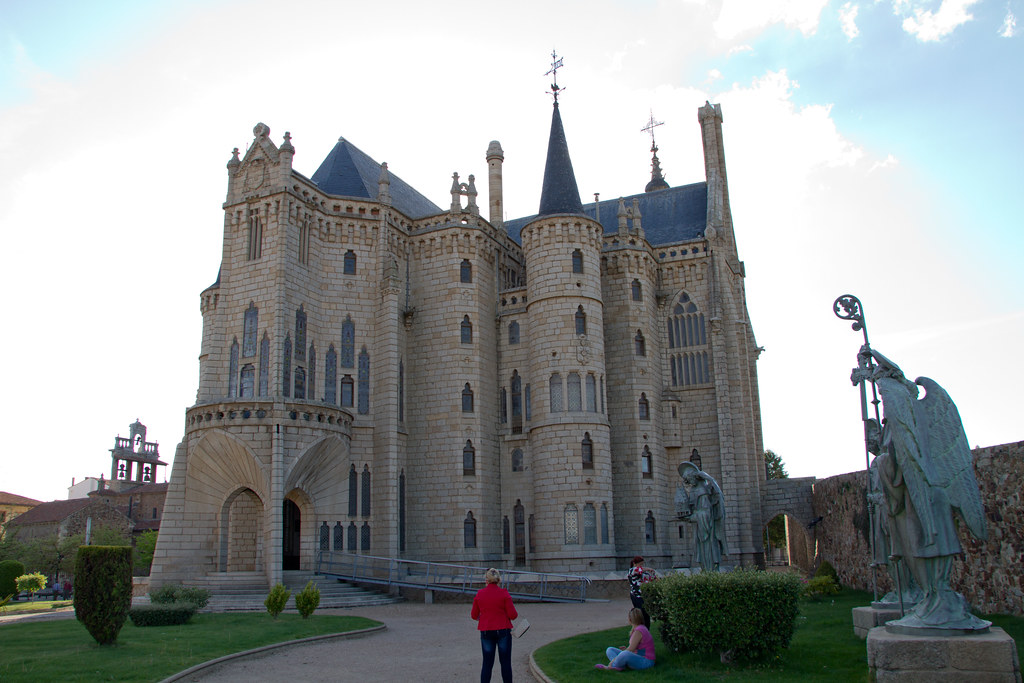 The place I want to visit the most that I haven’t visited yet in Gaudi’s works is the Cathedral in Majorca. I would like to visit it someday.

Date of visit: 1 and 2 May 2017, overnightEvora is a provincial city of Alentejo, located about 2 hours east from Lisbon...

Visit Date: May 1, 2019, approximately noon.I visited this World Heritage Site for the first time in the first year of 2...