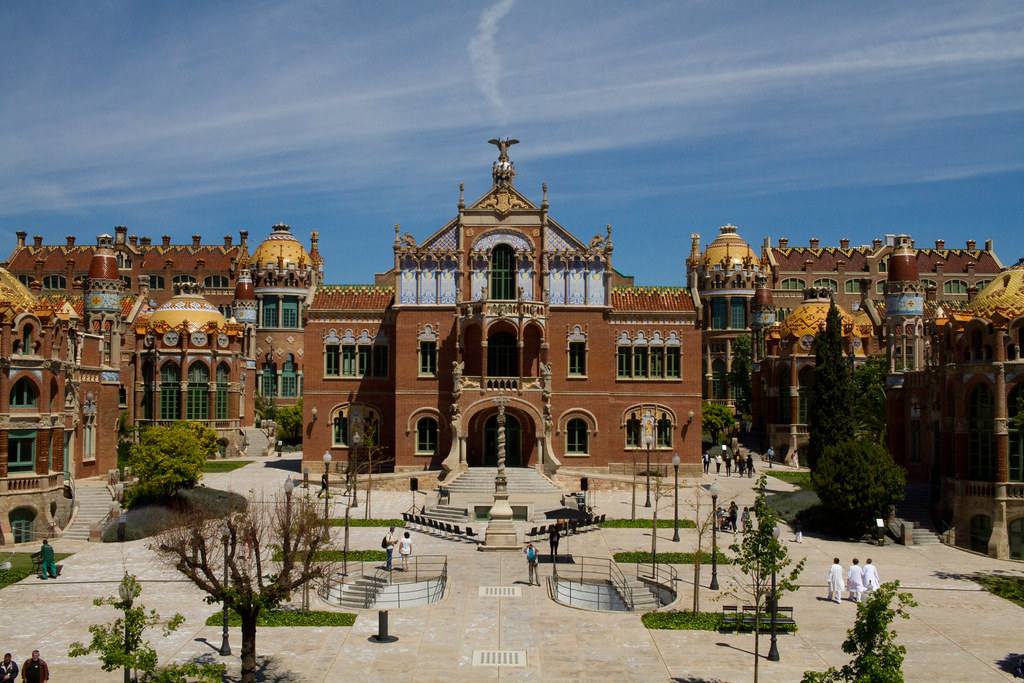 Date of visit: just after noon on May 5

One of the masterpieces of Montaner, the master of Modelismo, who is praised along with Gaudi.

Barcelona, the city of art, is best known for its Modelismo architecture. The most famous architect is Gaudi, who is so famous for the Sagrada Familia, but we must not forget the existence of another architect, Montaner.

« Lluís Domènech i Montaner is one of the leading architects of Catalan Modelismo, on a par with Gaudí and others.

Speaking of his works, first of all, there is the « Museo de Catalunya » which we visited again last night and this morning as a guided tour. And the Hospital de Sant Pau, which we are going to visit. Strictly speaking, this area is called Sant Pau. It is basically a hospital, but it was conceived as a « city within a city » with this hospital as its center.

The Catalan Music Hall, which I introduced last time, was also designed by him. Compared to Gaudi, his works are a little more vivid and easier to understand.

The construction of Sant Pau began in 1920, at the beginning of the 20th century, and was completed in 1930. Unfortunately, Louise, the designer, died in 1923 without having seen the completion of St. Pau.

More recently, two years ago in 2014, it was reopened to the public after completing a nearly four-year restoration project.

The brochure was very nice.

Now, it takes about 5 minutes to walk from the nearest subway station. Arrive at Sant Pau Hospital. To enter, first go to the building in front of the entrance (administration building) and buy a ticket there. You will also receive a pamphlet and a patch. You need to wear this on your chest when you are inside the building.

The brochure of this hospital was very nice. I got the French version for my study.

It’s been almost half a year since May, and my French is much better now than it was then, so I can read this French pamphlet more deeply.

So, I read that French pamphlet a little bit hard, and I’ll give you a brief explanation about Saint Pau Hospital.

The origin of the Hospital of Saint-Pau dates back to 1401. It dates back to 1401, when the old town hall and the archdiocese decided, as part of a public works project, to unite the six hospitals in the city under the name of « L’hospital de la Sainte Crue ». Then, in the 20th century, the banker Pau Gil was asked to build a new hospital for the growing population, and he sponsored the construction of this hospital. 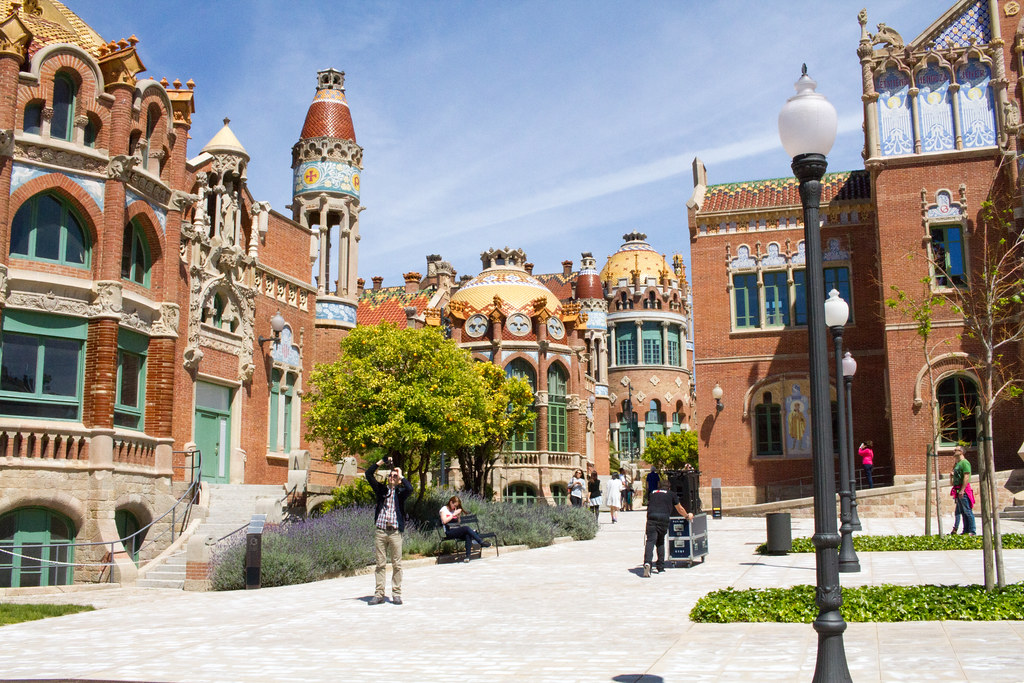 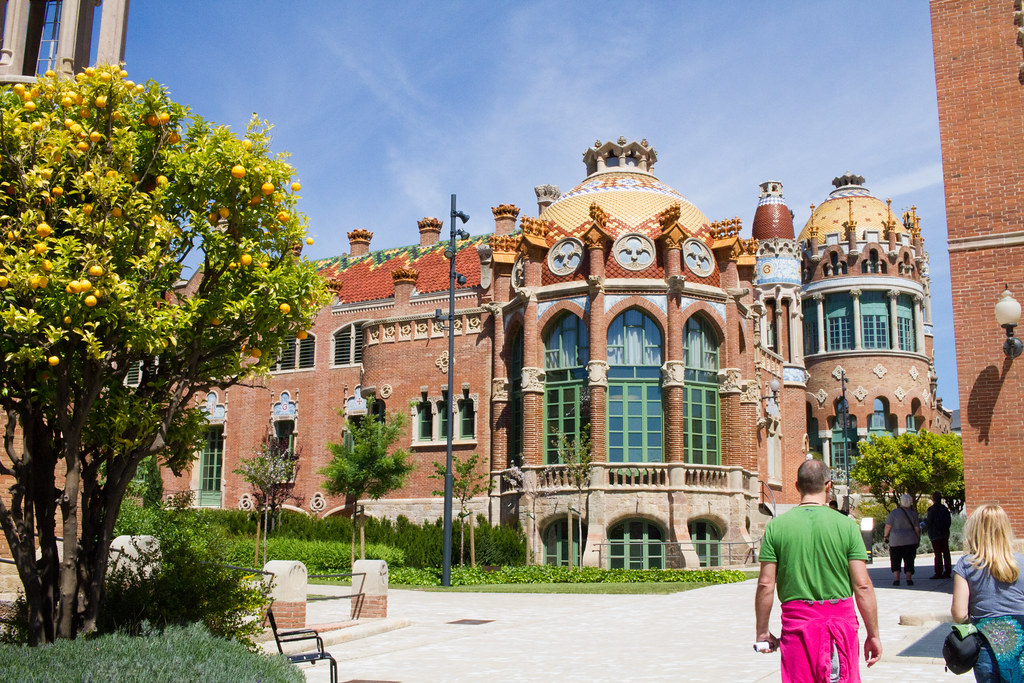 Each ward on the site was isolated from each other, but to facilitate the movement of doctors and nurses, each ward was connected by this underground passage. This system was designed for hygienic reasons. 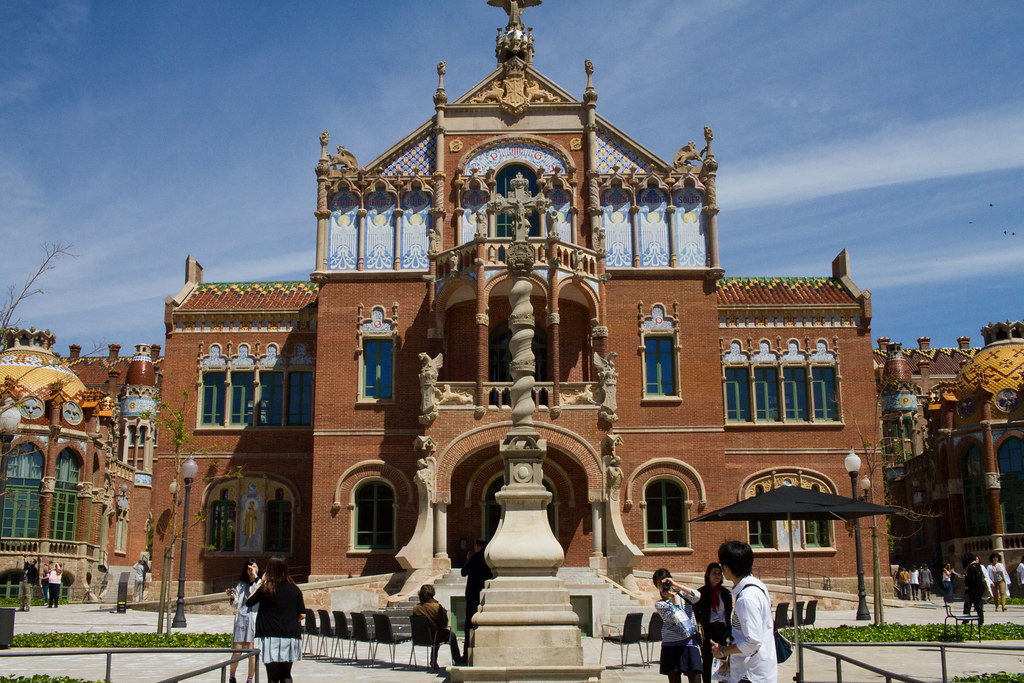 The plot of Sant Pau Hospital is 145 square meters in size and has a large street 500 meters long and 50 meters wide from north to south. The structure of the plot is symmetrical. The structure of the plot is symmetrical, with several wards lined up in a roughly regular pattern. You can see it clearly in the photos on the brochure and from the air.

We took a walk around the courtyard. (To be honest, the interiors of St. George’s Ward and St. Raphael’s Ward themselves were not very impressive.

Then we came back to the administration building again. This inside was like a big cathedral. I couldn’t take a very good picture… 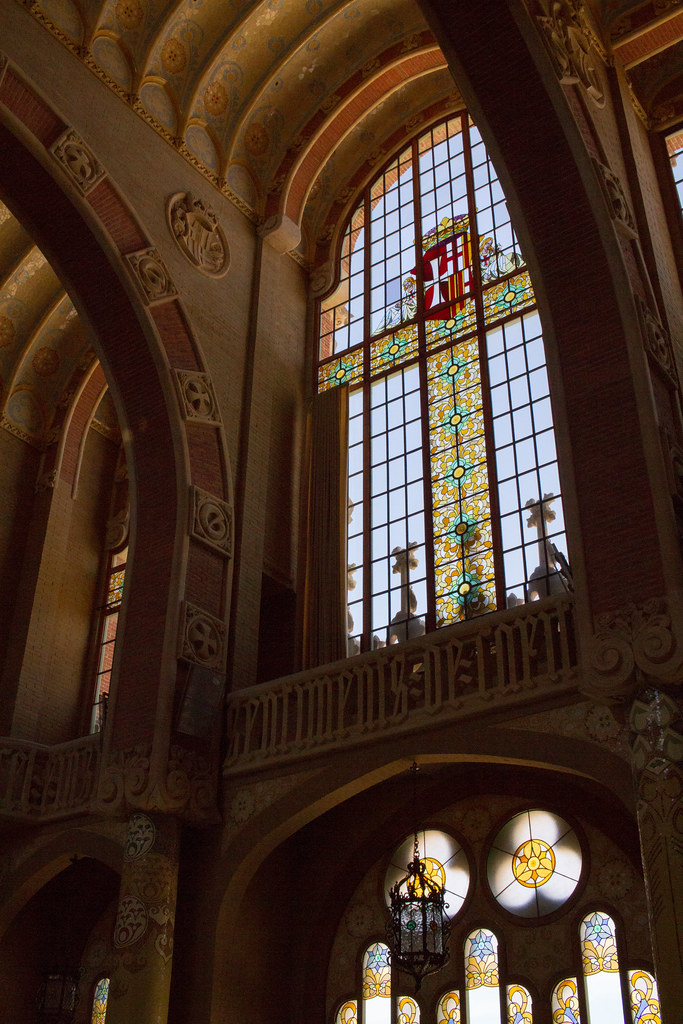 The administration building was built between 1905 and 1910. It is, of course, the largest and most luxurious structure on this St. Paul parcel.

Fortunately, we were blessed with sunny weather, and we were very happy to be able to appreciate the very beautiful Montaner architecture, which was beautifully reflected in the blue sky.

In addition, we went to the Park Güell by taxi after this, but to our surprise, we couldn’t visit there because it seemed to be necessary to make a reservation. I have been there many times, but for my wife who was the first time in Barcelona, it was very disappointing. Let’s go again.

Continue to Traffic Violations in Spain, I contacted the Spanish Embassy to ask if the website http is not encrypted and dangerous…

Our annual GW Europe trip is finally coming up next week, and I'd like to talk about this topic again just before the tr...