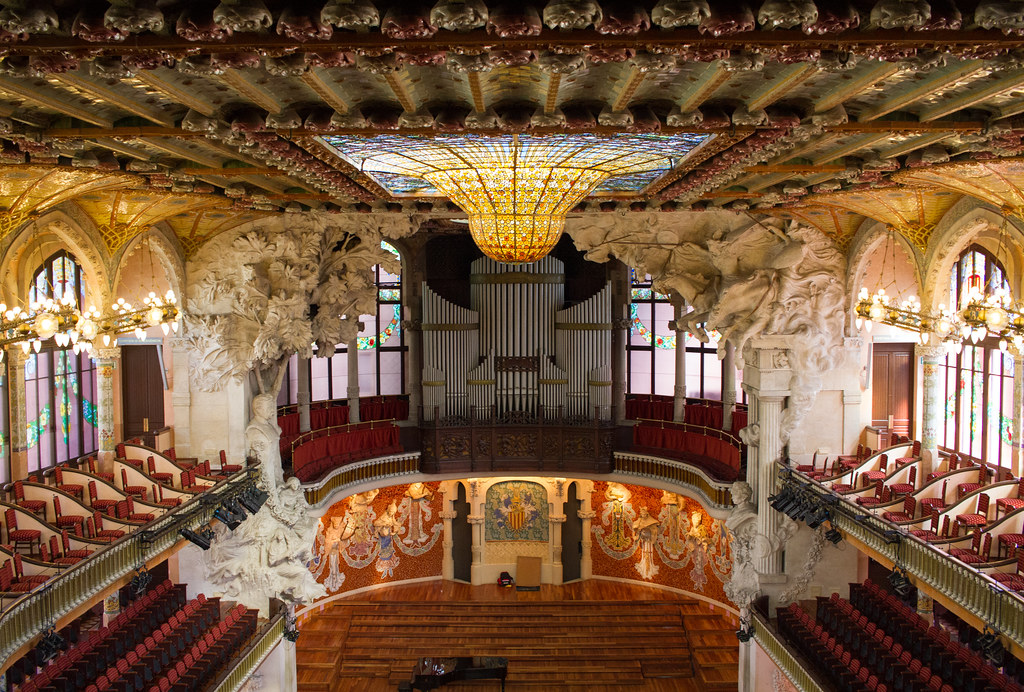 It was my first visit to Barcelona, a city I have visited many times.

I’ve been to this music hall several times before, but I hadn’t actually visited it. I had been thinking of going there, but I had never been there. It’s like that in Barcelona, I always think that I can come back again anyway.

Hotel in Barcelona, car parking near the hotel

So, we checked in safely to the inn in Barcelona. Of course we checked in with the rental car and the car. But the hotel didn’t have a parking lot, so we decided to take care of a public parking lot nearby for two days.

By the way, the location of the parking lot has been searched in advance with Google Maps and Street View. In the city, these public parking lots are plentiful, but because the city is large, there may be a distance from the parking lot to the hotel. Therefore, when I book a hotel, I always check if there is a parking lot around it.

Coincidentally, Schiff’s piano recital was held during the visit

I have no clothes to wear and no shoes!

By the way, I didn’t expect to go to such a classical concert at all in this trip to Spain, so I brought only casual clothes and shoes. So, I didn’t have clothes and shoes to come to the concert! I always wore sportswear and sneakers when sightseeing. I can handle a bit of casual wear, but this is indeed….

But this is the big city Barcelona, you can get everything here. Fortunately, there were many shops near the Catalan Concert Hall, so I got a collared shirt and shoes with laces here. Now I can go to the concert in peace.

After that, I went back to the hotel to change my clothes and went to the concert hall again by subway. When we bought the tickets, it was around 18:00, when the guided tour was already finished, so it was sparsely crowded, but when we arrived again, it was already full of people who wanted to see the concert.

I think the entrance was about 30 minutes before the show. Of course, you need to show your ticket, but I felt it was not so detailed and generous like in Japan.

And it was the first time to enter the music hall. I was very impressed by its beauty.

By the way, I visited this music hall again on the next day with a guided tour, but I thought the atmosphere was much better at night.

Then Sif’s concert started. The concert started with Sif’s favorite classical pieces. In particular, Mozart’s C major sonata, which is easy to play but simple and difficult to play, was wonderful, because it had a strong tension in a good sense in a lovely tune.

I heard that Schiff is famous for his long encores, and it was indeed long! He played three encores, and each of them was surprisingly long.

I’m really lucky to be able to hear world-class performances in this wonderful artistic hall. A very satisfying position was thus ended.

The next day is a guided tour

Now, as I already mentioned, the next day also came. It is a guided tour. I bought the ticket the day before at the same time as the hall concert ticket.

I applied for the tour from 10:00 a.m., and was told to meet 10 minutes before, but I arrived at 9:30 a.m., but there were already many people. As expected of a world heritage site, it’s a popular spot.

While I was waiting, I saw an exhibition of Granados, a great Spanish composer, near the meeting point of the hall entrance. This year is exactly 100 years since his death. The exhibition seemed to be a memorial event for him. 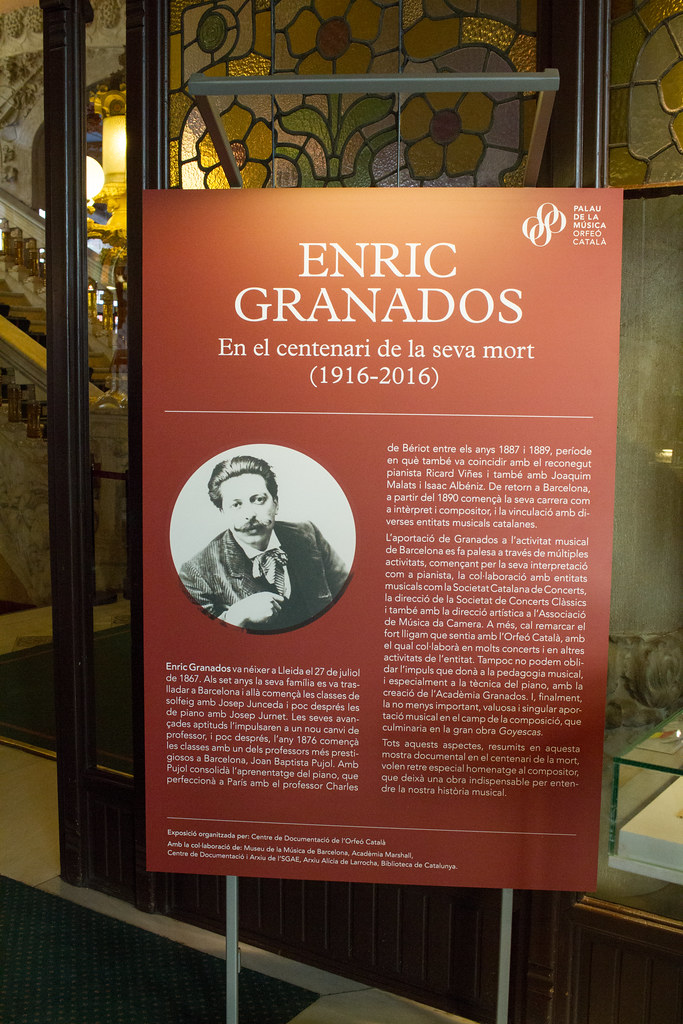 Apparently, this Granados was deeply involved in and contributed greatly to the Catalan Music Hall and Music Society. I have a feeling that he had a great influence on the music world in Catalonia. 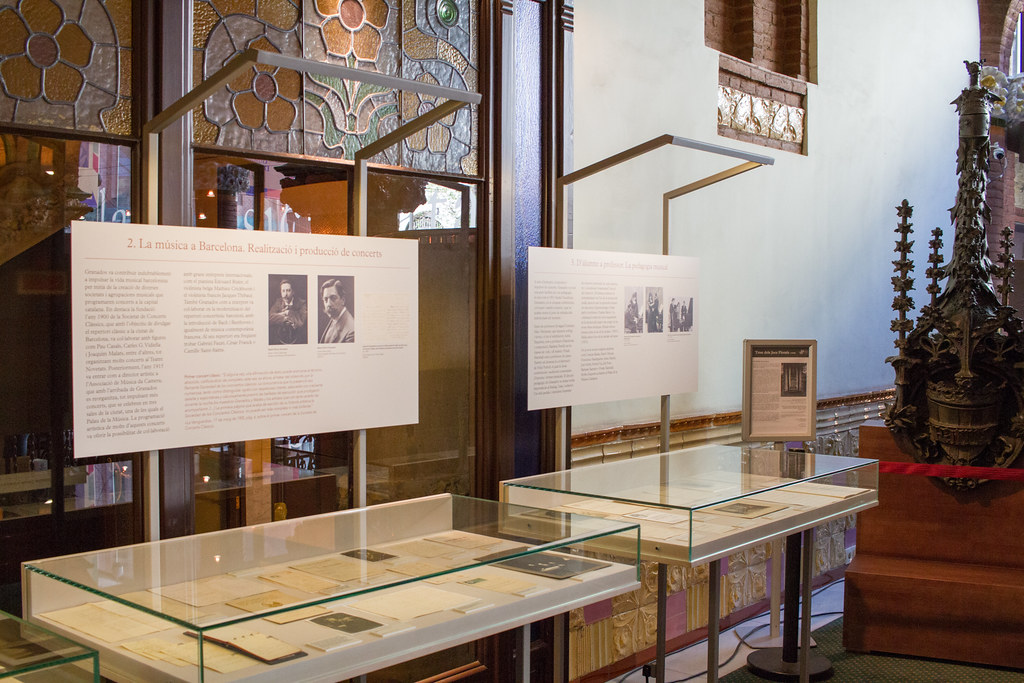 And while I was spending this and that, it was 10 o’clock of the schedule time. The guided tour starts. After watching a video in the audio room next to the café-restaurant, we finally entered the music hall.

We were shown to the foyer, the terrace and the second floor of the hall, which we couldn’t see so slowly yesterday. 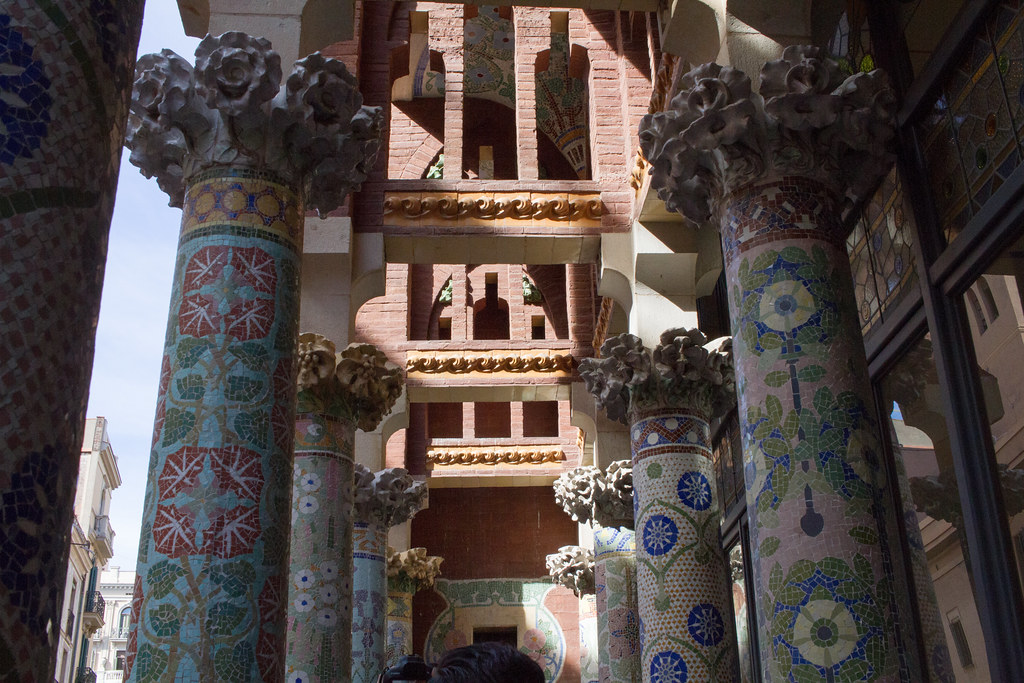 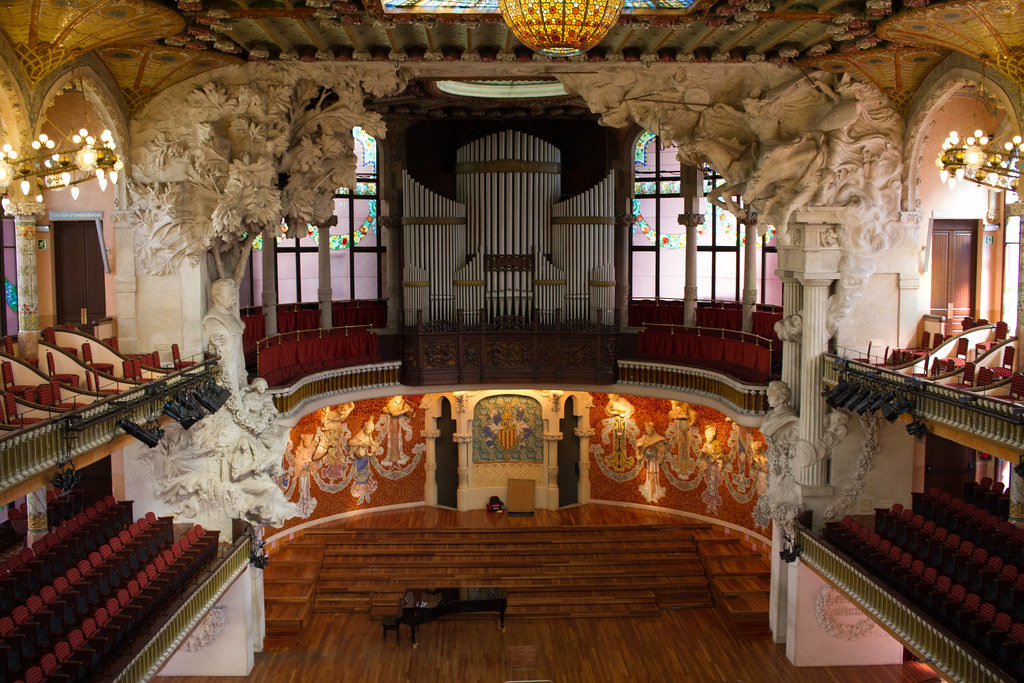 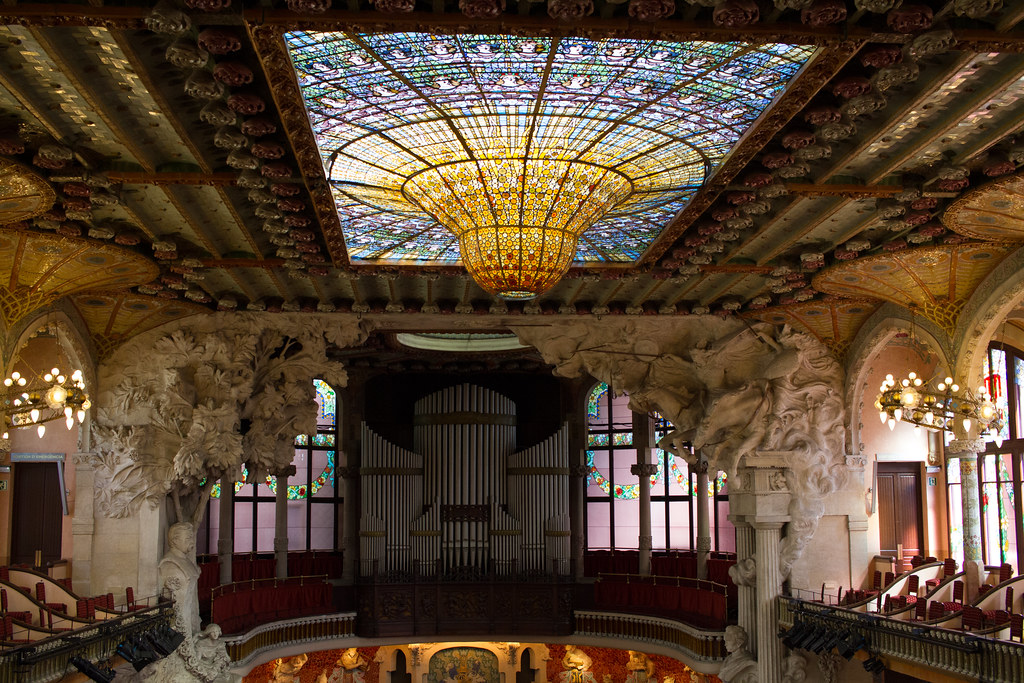 We ended with a view of the hall from the first floor seats where we were yesterday. 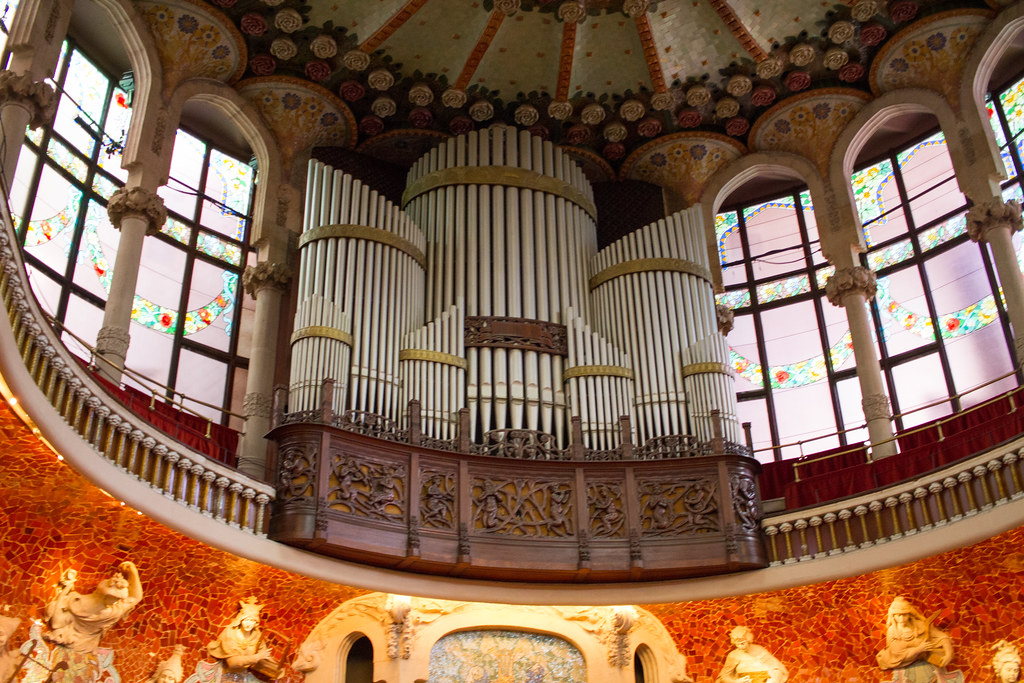 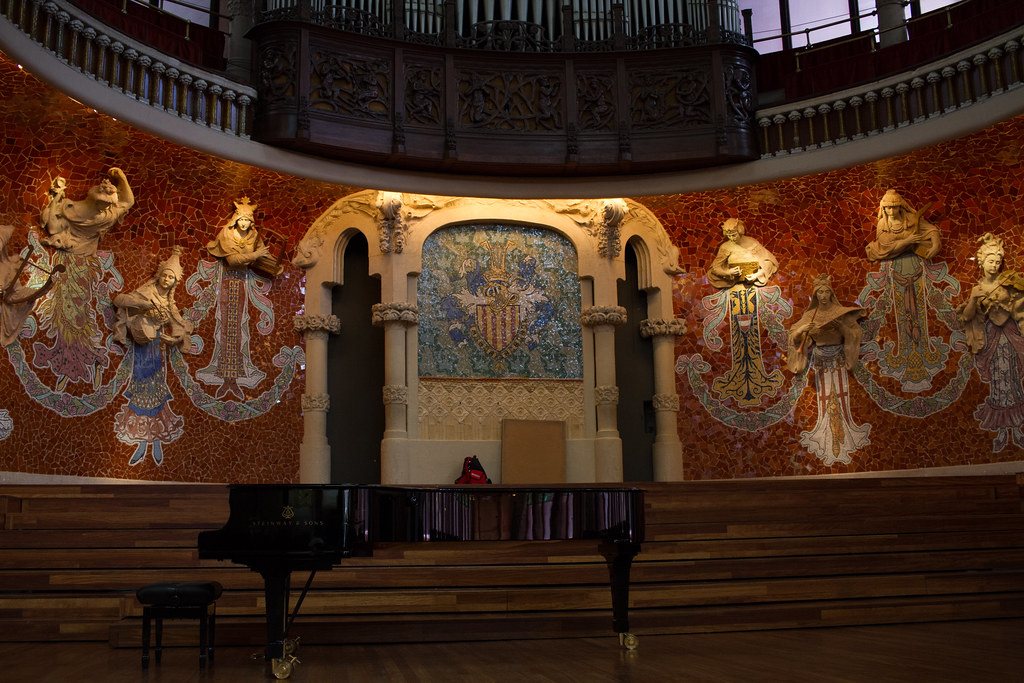 But still, this kind of stained glass. It may be beautiful, but the design is a bit dense. But maybe it fits very well in this place of Barcelona. I strongly felt a truly unique artistic style, influenced by Christian culture but also by the local culture. 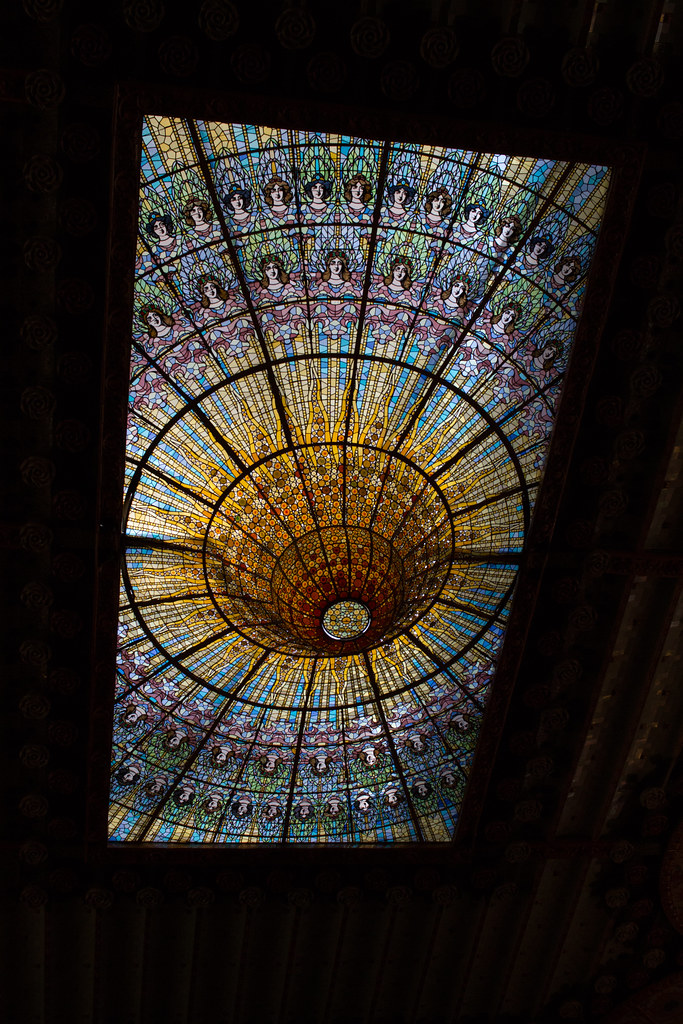 The guide was in English, but to be honest, it was hard to understand because the guide lady’s English was not so good. I don’t understand her even if she speaks fluent English.

No.5 Cesky Krumlov: 2008 Czech,Austria and Germany