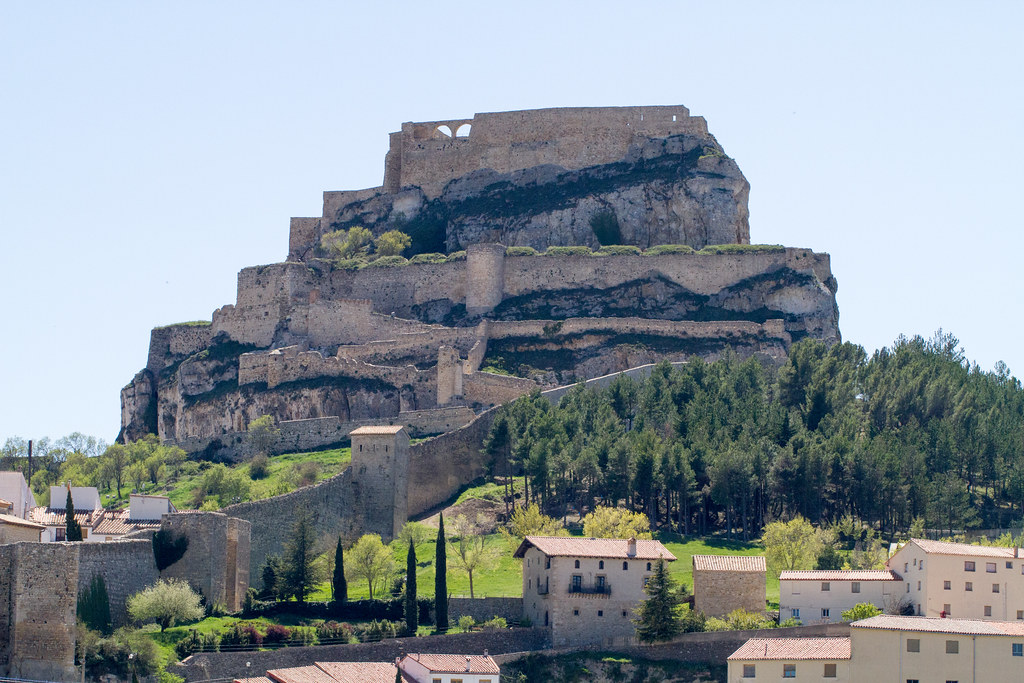 Teruel, the tour of the beautiful inland villages of Valencia continues

The tour of beautiful villages continues. As we have already mentioned, this area is dotted with fortified cities that may have been the base of a battle with Islamic forces around the 12th century, and because of this, there are many small towns and villages that have been selected as beautiful villages.

The third visit of the day was to Morella. The location is around here.

It was just around noon when we arrived, and the sun was high and it was getting hot. Of course we have a jacket, but it might get hot while we are walking around.

The village of Morella is much larger than the other two villages we have visited so far this day, and has many more tourists. There is a magnificent castle at the top of the village built on a hill. 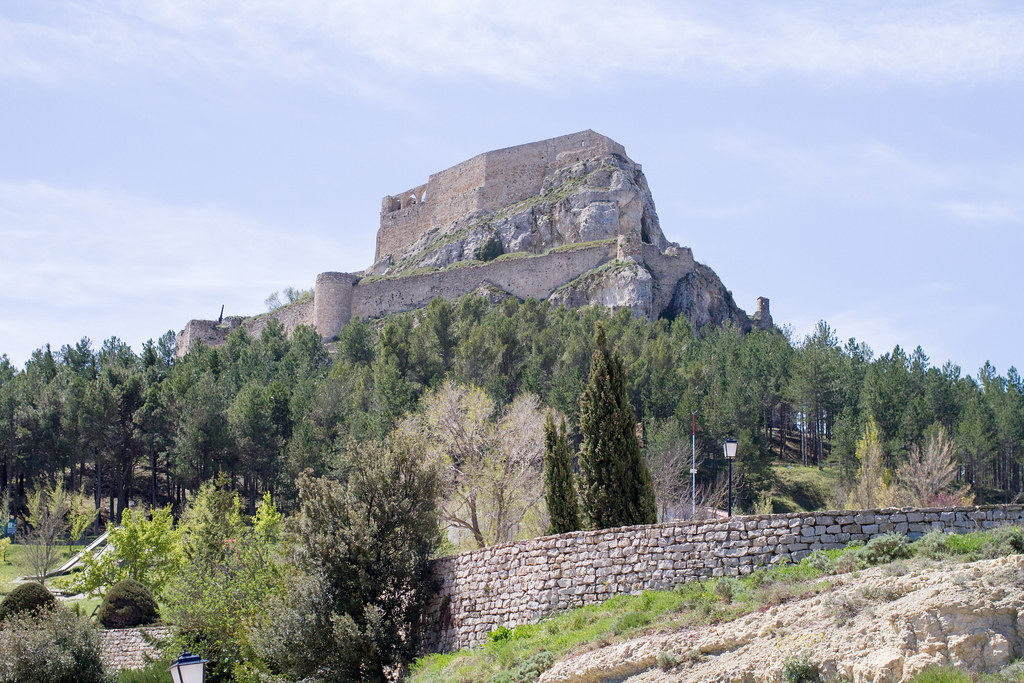 And it looks like it’s well maintained for tourists. This seems to be quite promising. 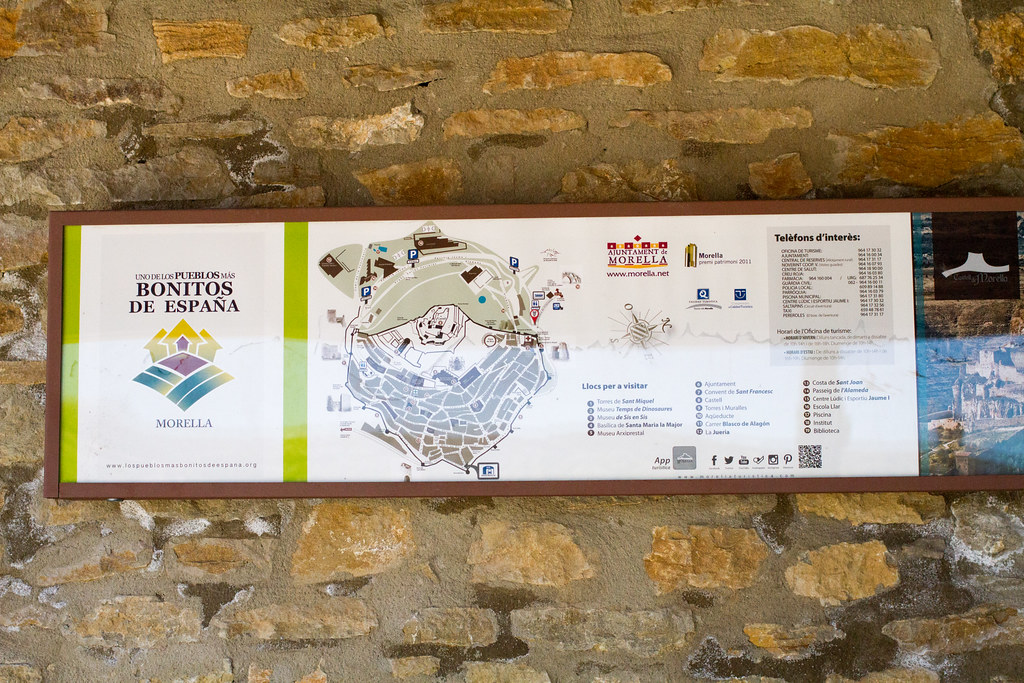 Of course, there is a parking lot. It’s wonderful. 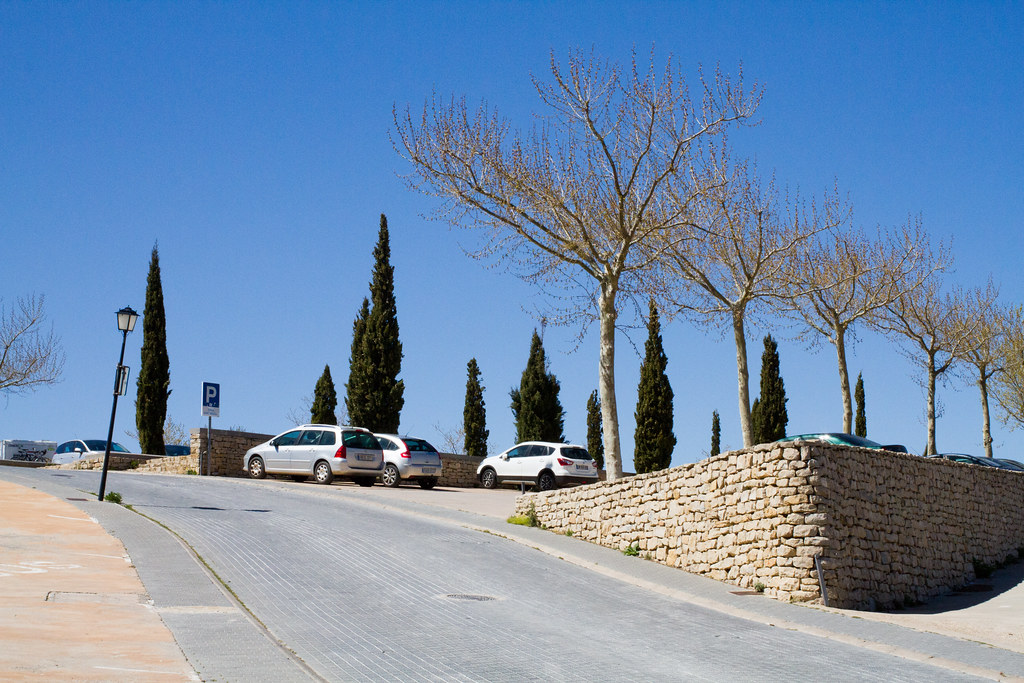 Plus, there are plenty of souvenir shops, which means you might even get to eat!

Moreover, I finally found « The Most Beautiful Villages of Spain Official Guidebook » and bought it here.

And anyway, we decided to head for the chateau and the church, which seemed to be in the center of the village. This village seems to have a lot of restaurants as well as souvenir shops. 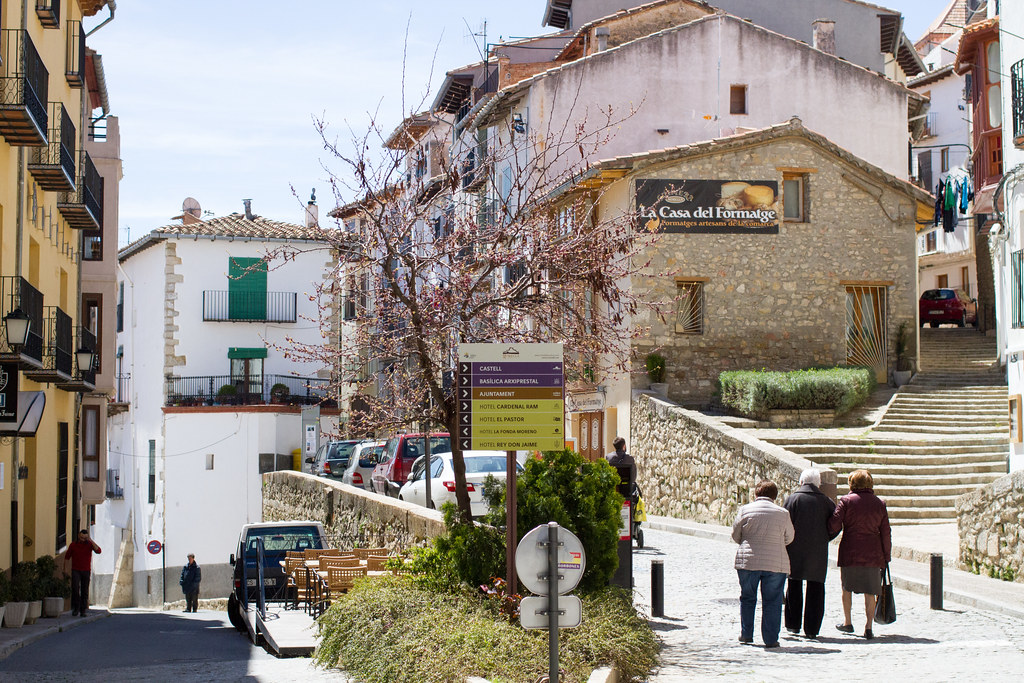 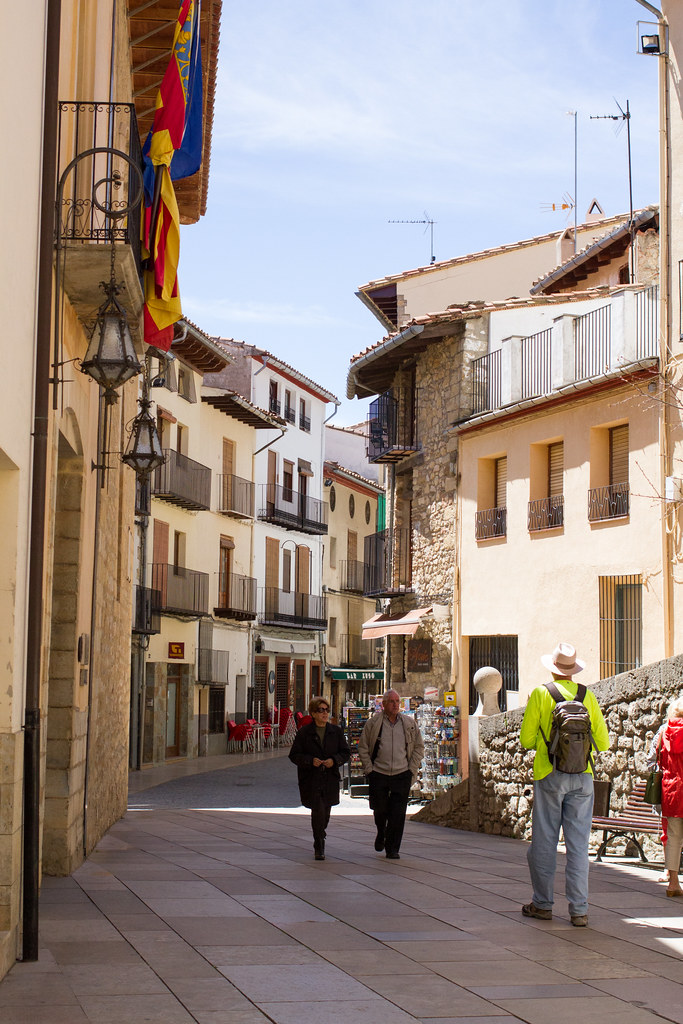 We decided to have a leisurely lunch here, as we were digesting our schedule more smoothly than we expected.

We chose this restaurant based on a quick look at the shops on Main Street and reviews on TripAdvisor. It seems to be a restaurant with a very good reputation.

It’s a bit of an alleyway, so it might be hard to find. But there is a sign on the main street, so as long as you don’t miss it, you’ll be fine. 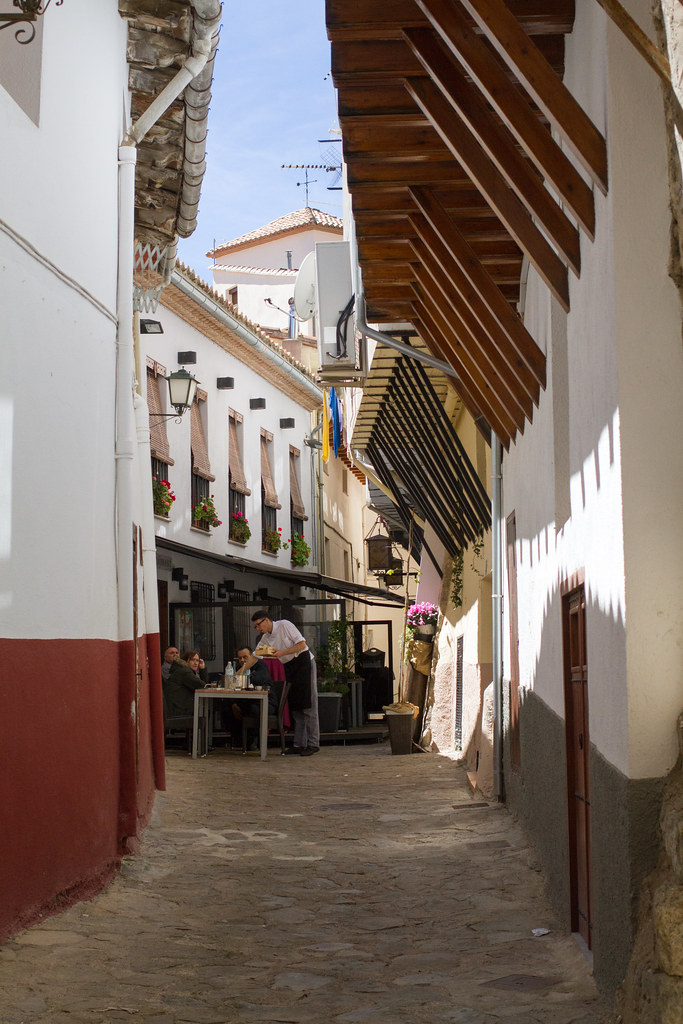 Apparently they had a lunch menu, so we chose that without any particular thought. Here is the menu.

As for the appetizers, what I thought was particularly good was the croquettes. Croquettes are cream croquettes, and the ones we had here did not have potatoes in them. And the inside is meat. I wish meat-based cream croquettes were popular in Japan. The main dish was lamb, but to be honest, it wasn’t very good. The ingredients were not good. It’s a pity because the seasoning is very good. The dessert was good.

I also ordered a little bit of wine.

Also, the bread seems to be homemade and this was very tasty.

After the meal, we’ll resume our tour of the village. At first, let’s go to the castle at the top of the hill. We passed the Church of Santa Maria la Mayor, probably the most important church in the village, but we couldn’t go inside. 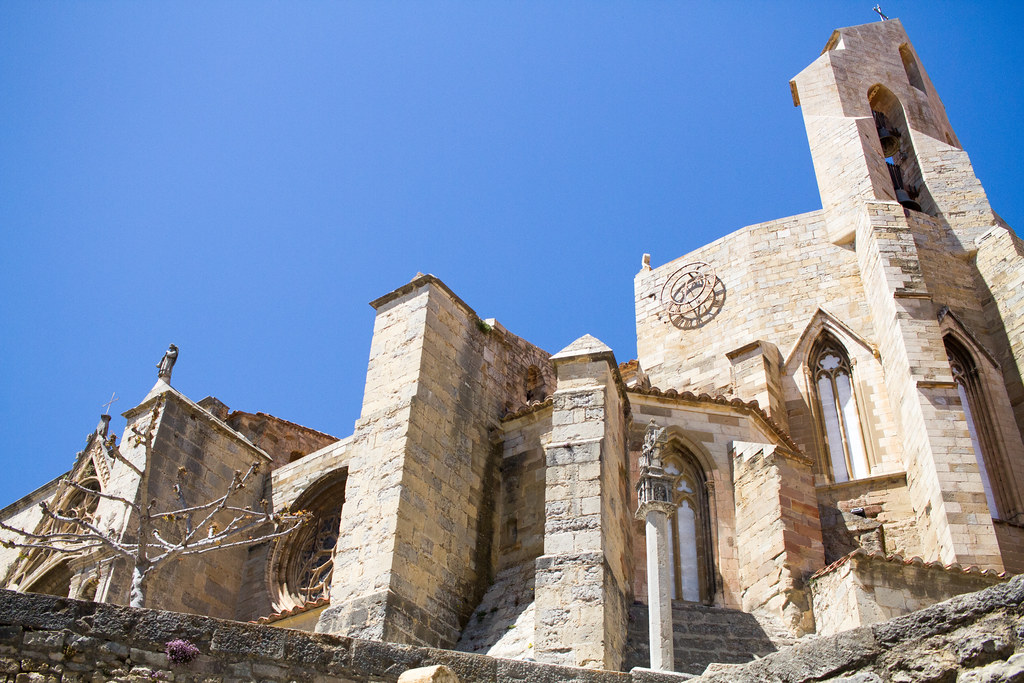 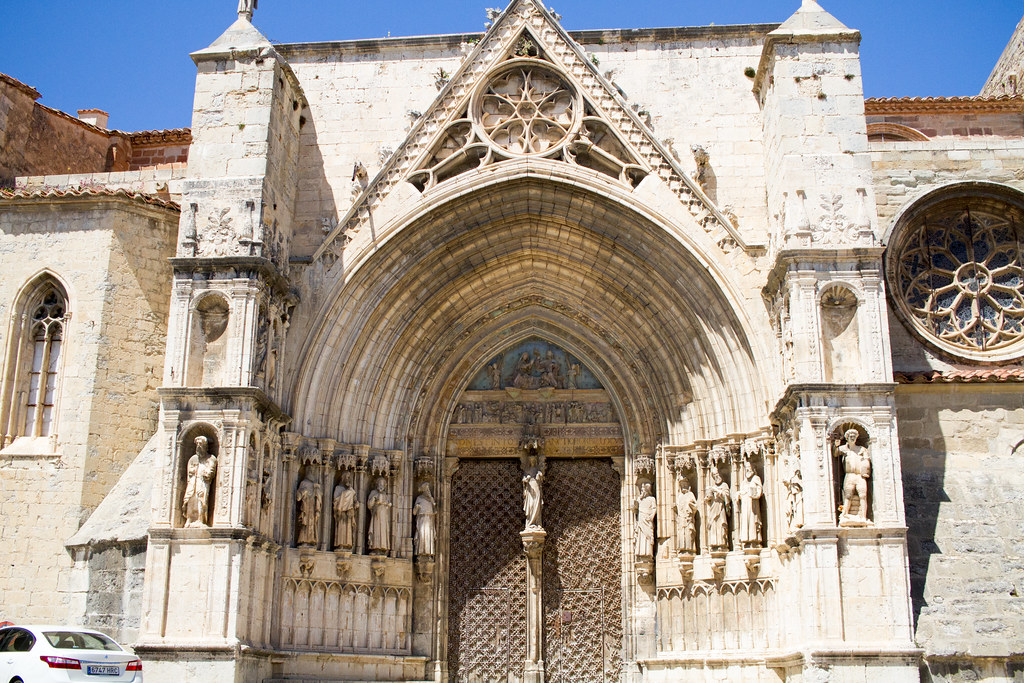 And from there it’s only a minute or so to your destination.

The ruin is also a large and magnificent castle

First of all, we paid the entrance fee at the entrance and received a map and a pamphlet explaining a brief history. We were unconditionally given a brochure in English. I wish it was in French at least….

Directly beneath the castle, as you can see, are the remains of a chapel, which is often found in Christian churches. 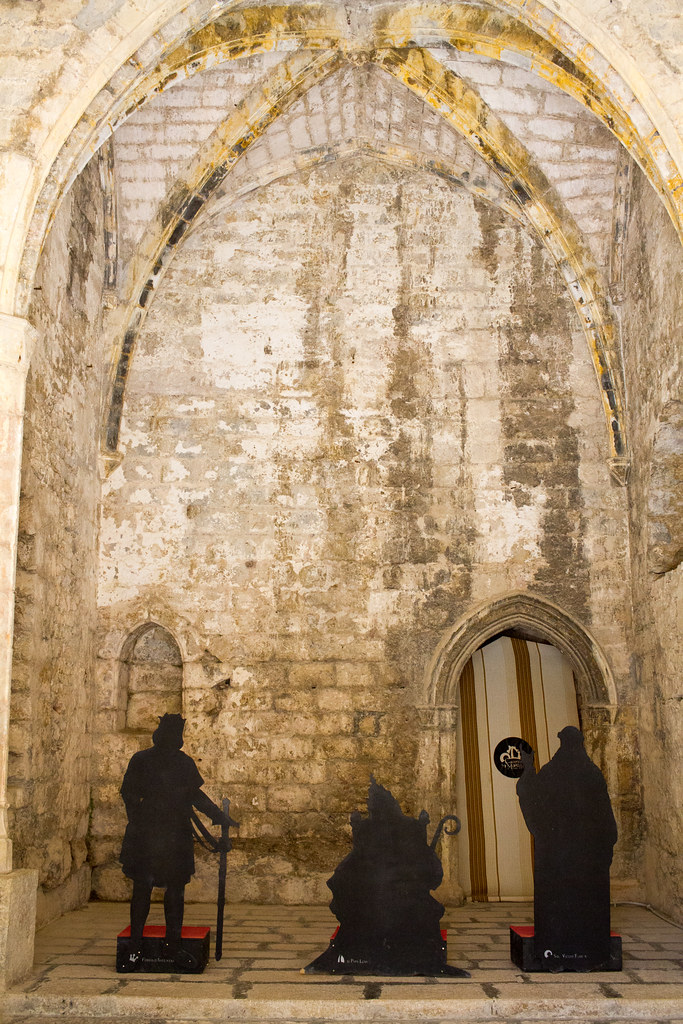 Now, let’s walk to the top of this castle. 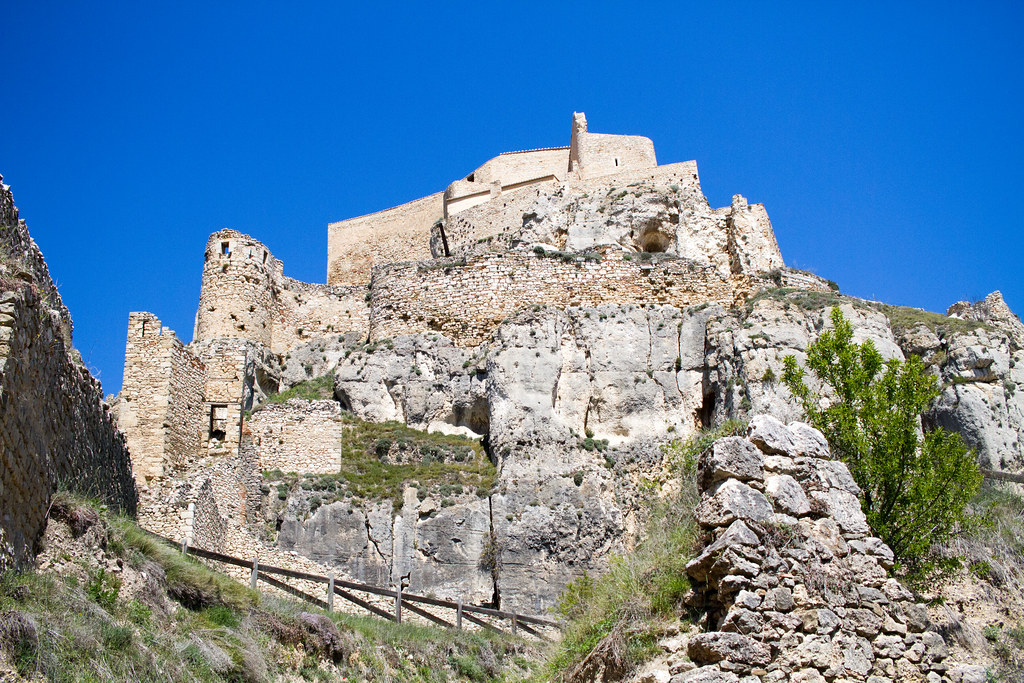 Well, it’s very hot and nice weather. Naturally, we had to wear short sleeves. The site was quite large and it was a long distance to the first gate. 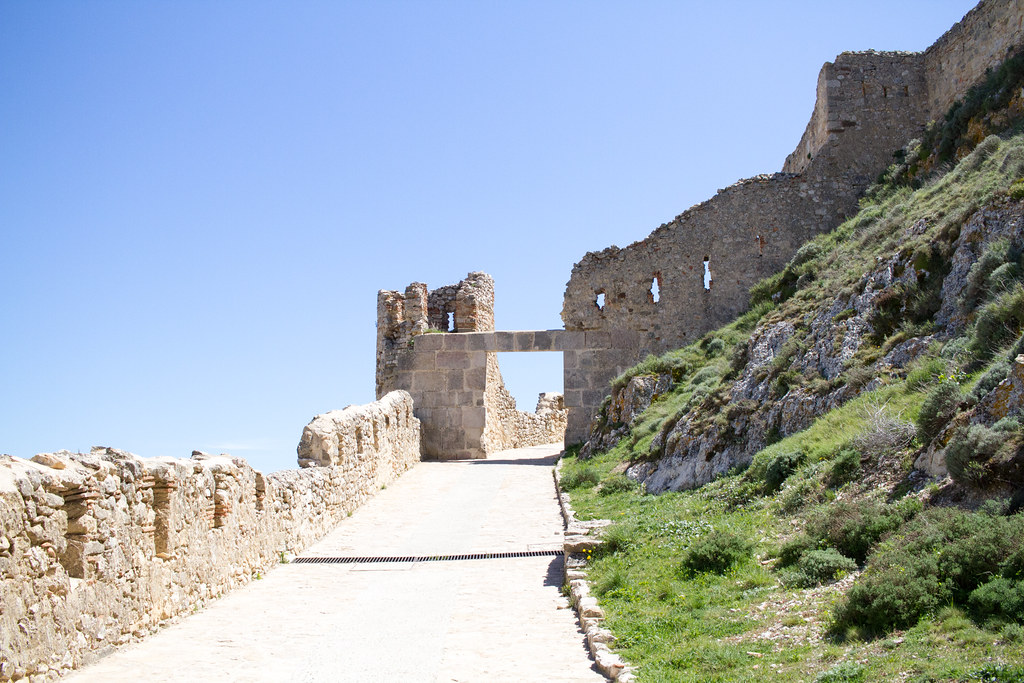 After more than five minutes, we finally arrived at the main gate. 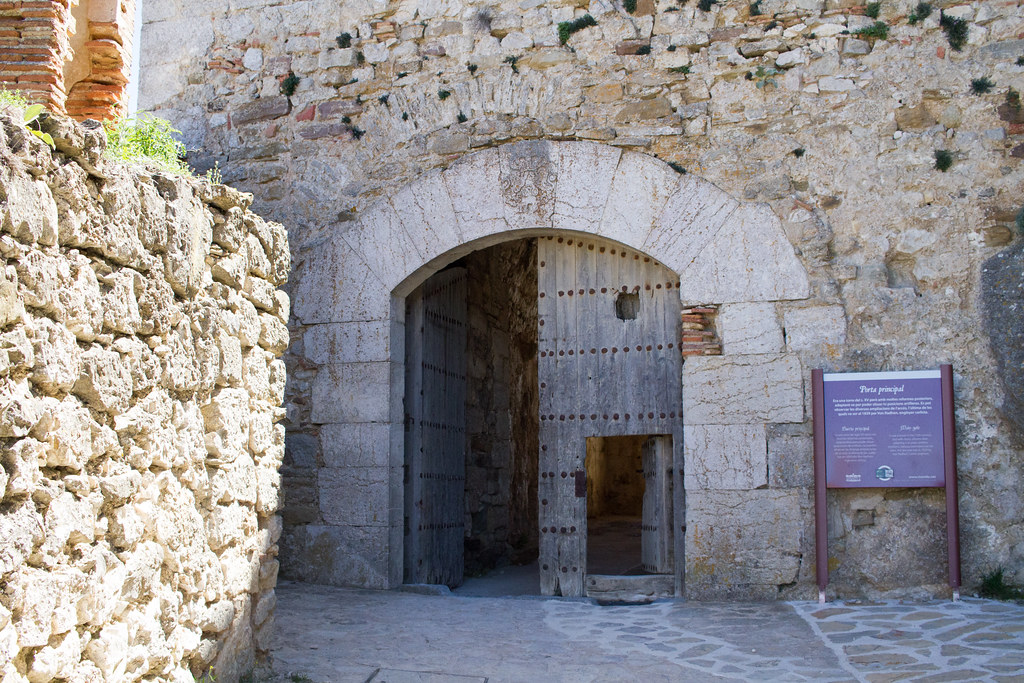 There was still a long way to go after passing through the main gate. 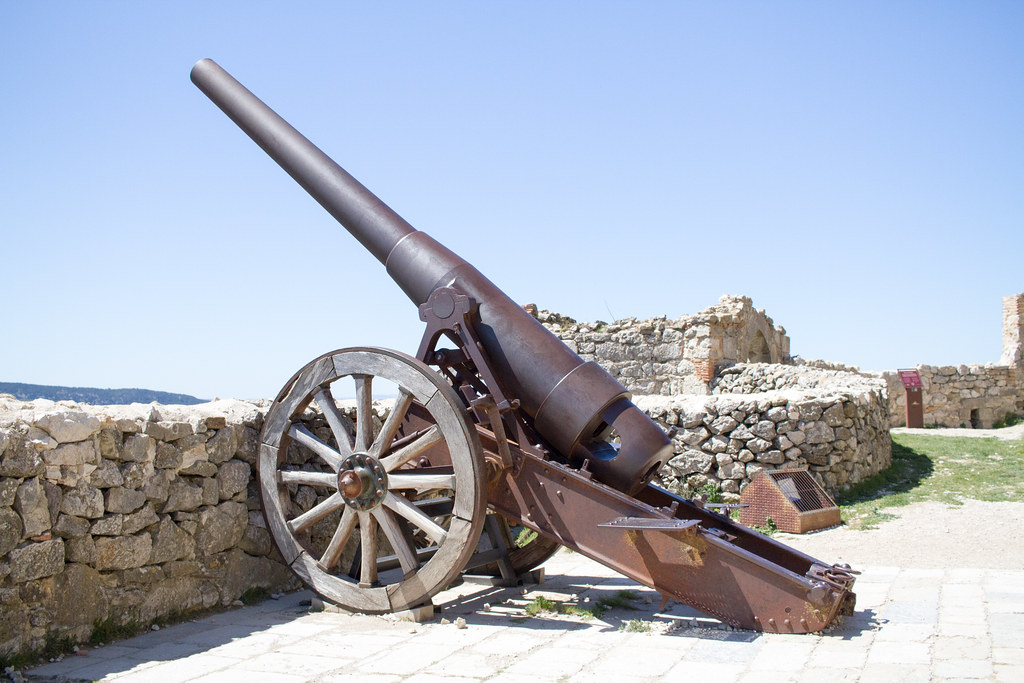 If you go further into the castle and finally climb these stairs, you will reach the top of the castle. 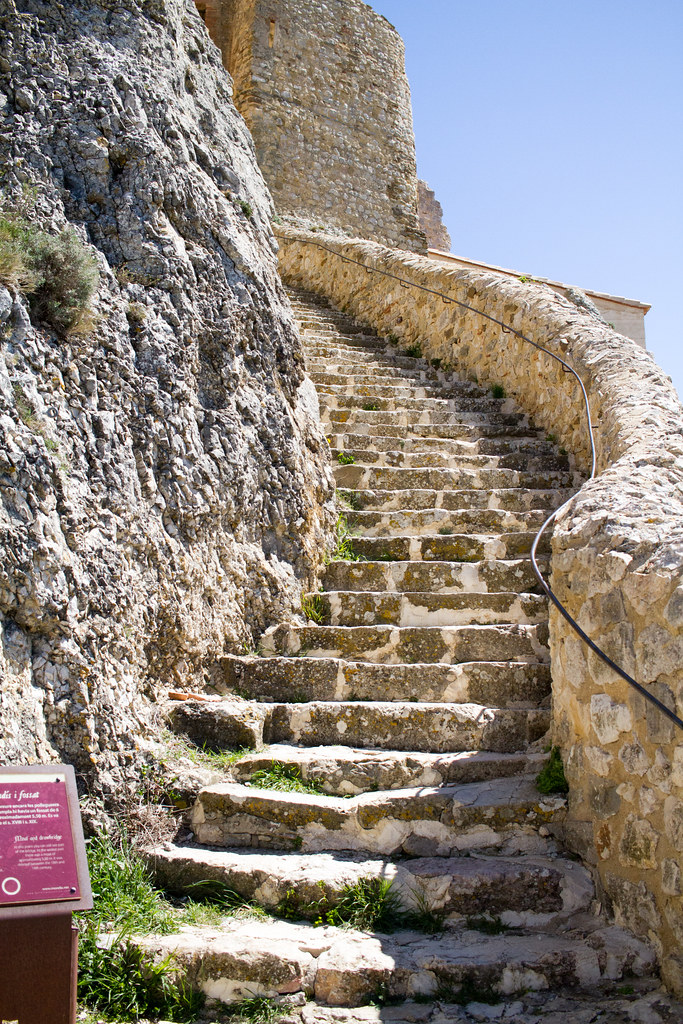 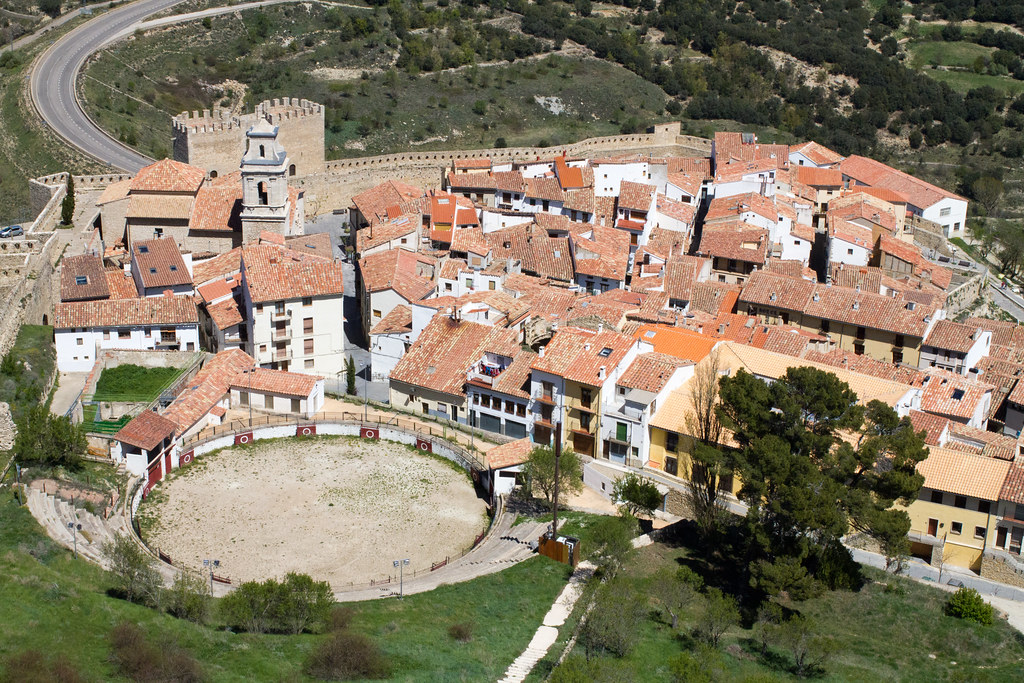 When I left, I took a picture. 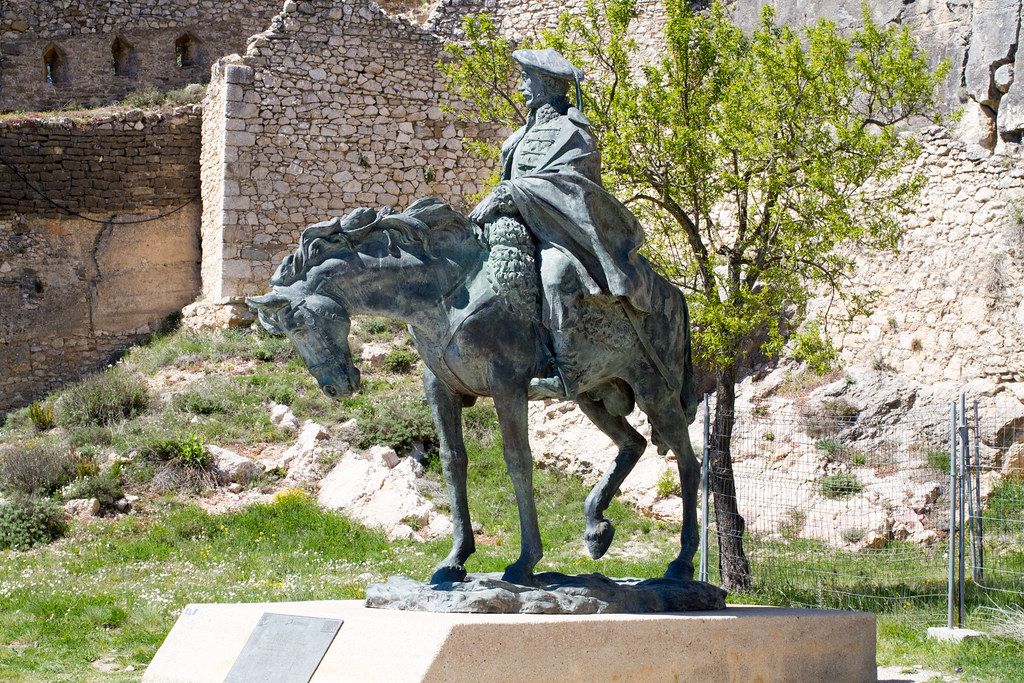 The castle was bigger than I expected and it took me a long time to see it (more than 30 minutes even for one person), but I finished it. Sightseeing in this village is also the end of this. After leaving the castle, I went back to the parking lot without any particular stopover. Almost all shops were closed for siesta because it was still before 16:00.

A distant view of the village

Back to the parking lot and to the car. It was hokey. The laundry was drying well. And finally, to get a distant view of the village, we drove around a bit and parked at a great spot for some photo time. I grasped this location from the top of the castle earlier. 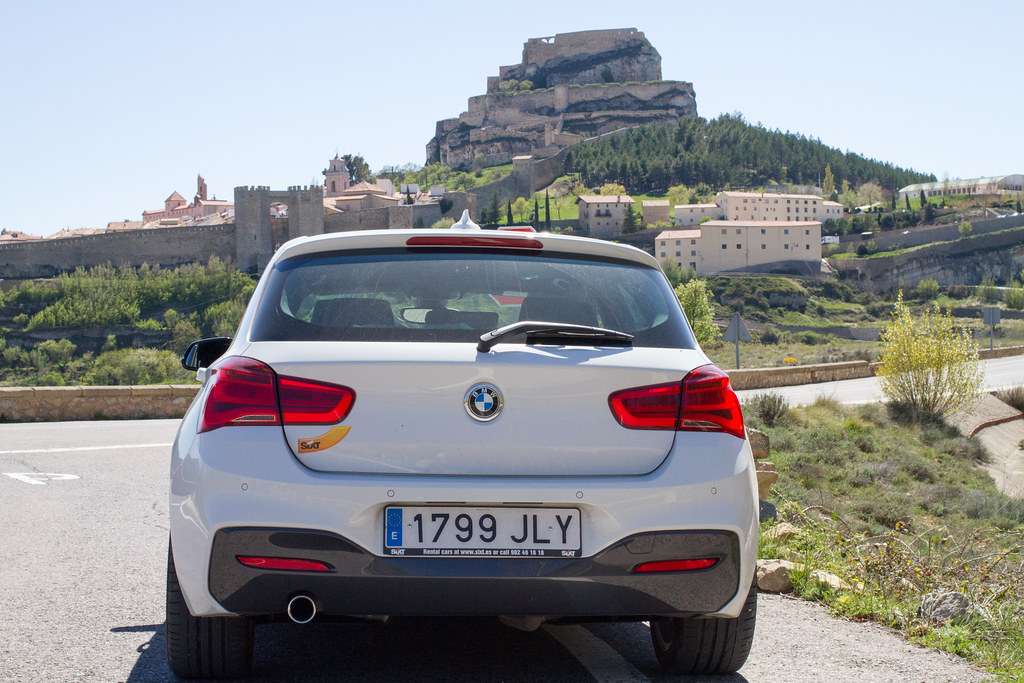 The new houses in the foreground were a bit of a hindrance, but I was able to get this powerful shot with my 100mm lens.

Rougemont (Rougemont) Tour of the most beautiful villages in Switzerland No.15 ★★☆☆☆☆

Nobressart – Tour of the most beautiful Walloon villages No.22 -★★★★☆