There are many world heritage sites in Italy, but this one is quite maniacal and not many people go there. The place is in the suburbs of the city called Spoleto in Umbria.

The Longobards were a Germanic people who ruled the Italian peninsula from the 6th to the 8th century.

When they took control of Italy, they converted it to Christianity and built many religious buildings throughout Italy. This style of architecture was recognized as a UNESCO World Heritage Site in 2011, because it combines the characteristics of Roman, Byzantine, and Germanic styles of northern Europe, as well as the spirituality of Christianity, and is considered to be extremely rare because it well conveys the architectural style that changed from ancient times to the Middle Ages. It was declared a UNESCO World Heritage Site in 2011.

This World Heritage Site is made up of several monuments. In this trip, we visited two of them, the Basilica of San Salvatore and the Small Temple of Critunno, both located around Spoleto in Umbria. However, to be precise, we were only able to see the small temple of Critunno. I will describe them below.

The Basilica of San Salvatore, wandering the cemetery, but not getting close enough…

The cathedral is located on the outskirts of Spoleto and was included in the constituent properties as a good example of an urban basilica for the Longobard elite. This was our next stop after leaving the beautiful village of Norcia. We were able to locate it on Google Maps and get close to it, but the last road to the cathedral was blocked by a landslide or under construction or something, so we couldn’t get close to it.

Somehow I found a good space behind a guardrail nearby and parked there, but I couldn’t find a way to get to the cathedral on foot… 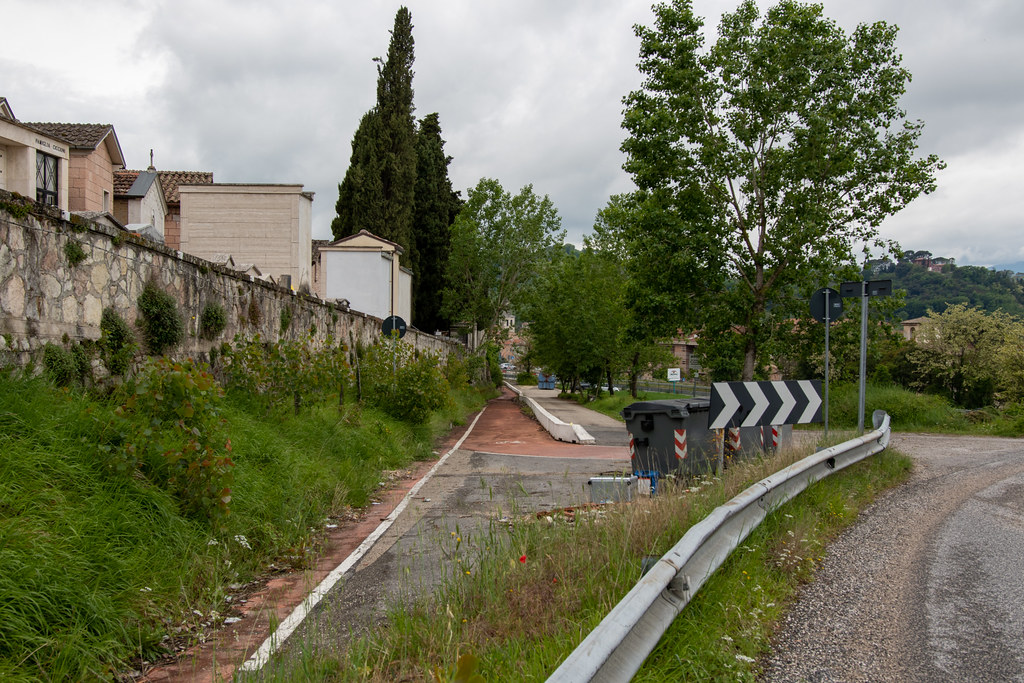 However, the cemetery, which was supposed to be on the site of the cathedral, was empty, so we tried to approach from there, but the cemetery was so big and wide that we couldn’t reach the cathedral. 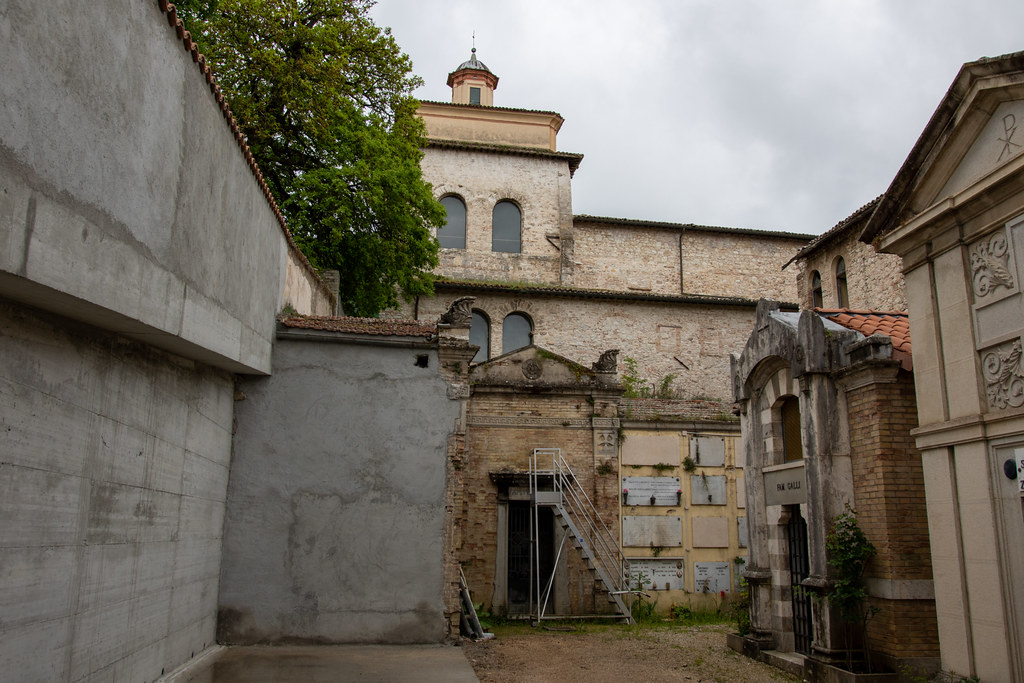 However, this cemetery was interesting because there were many large tombs, tombs that looked like houses, and it was like a city. 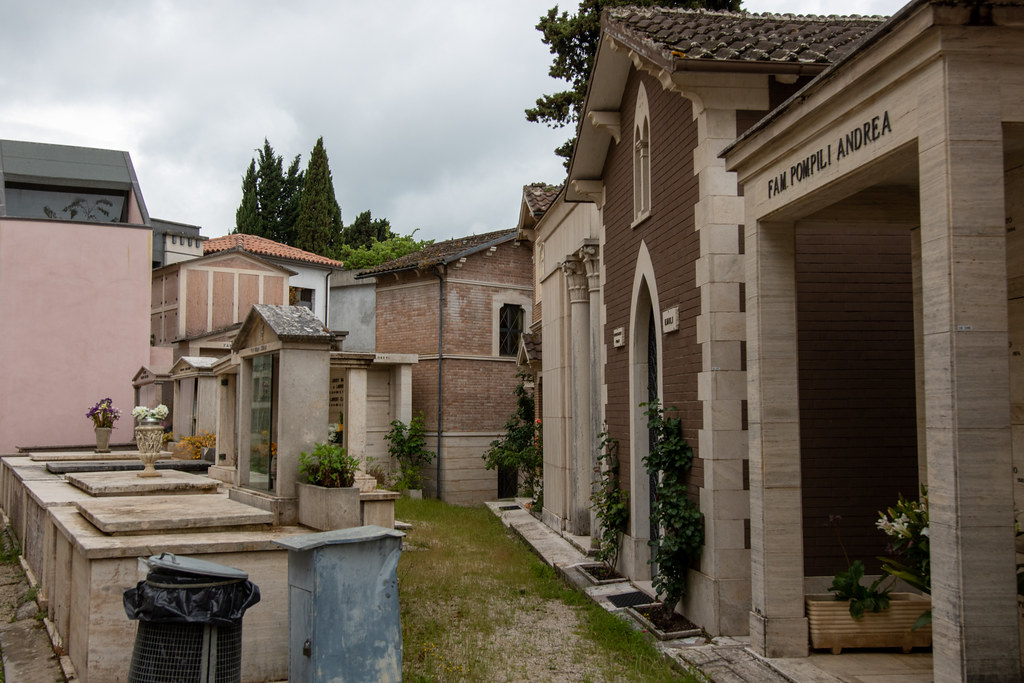 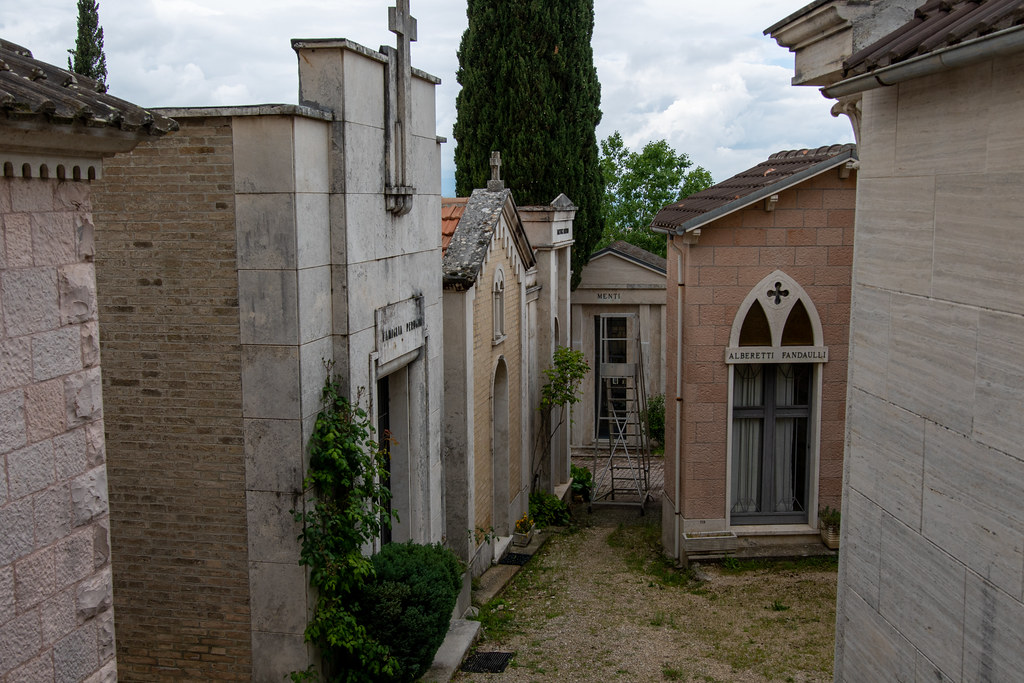 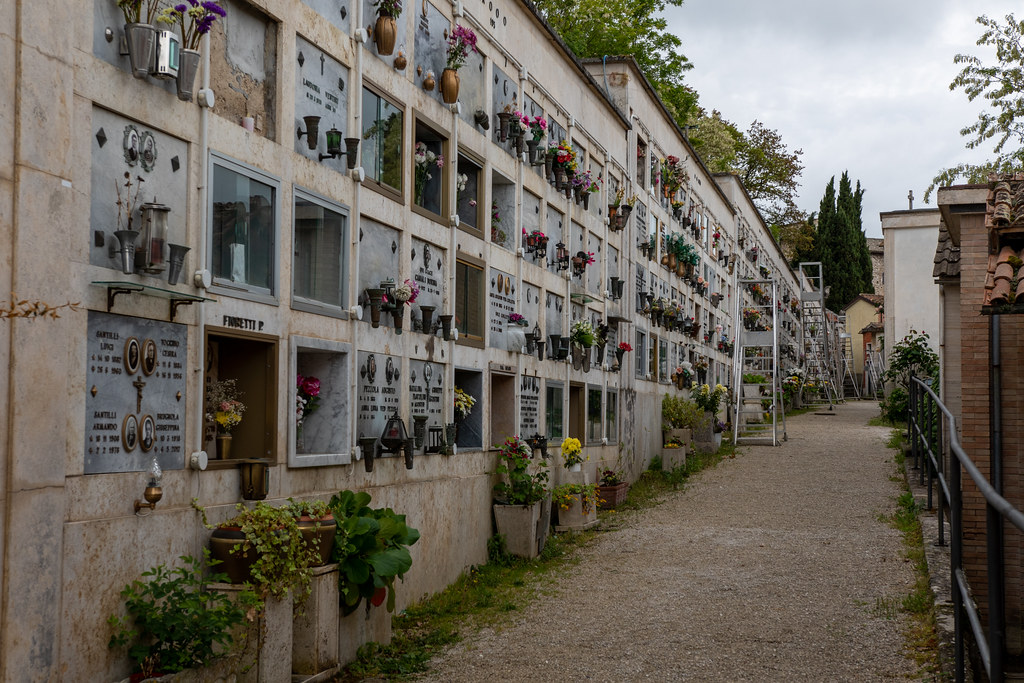 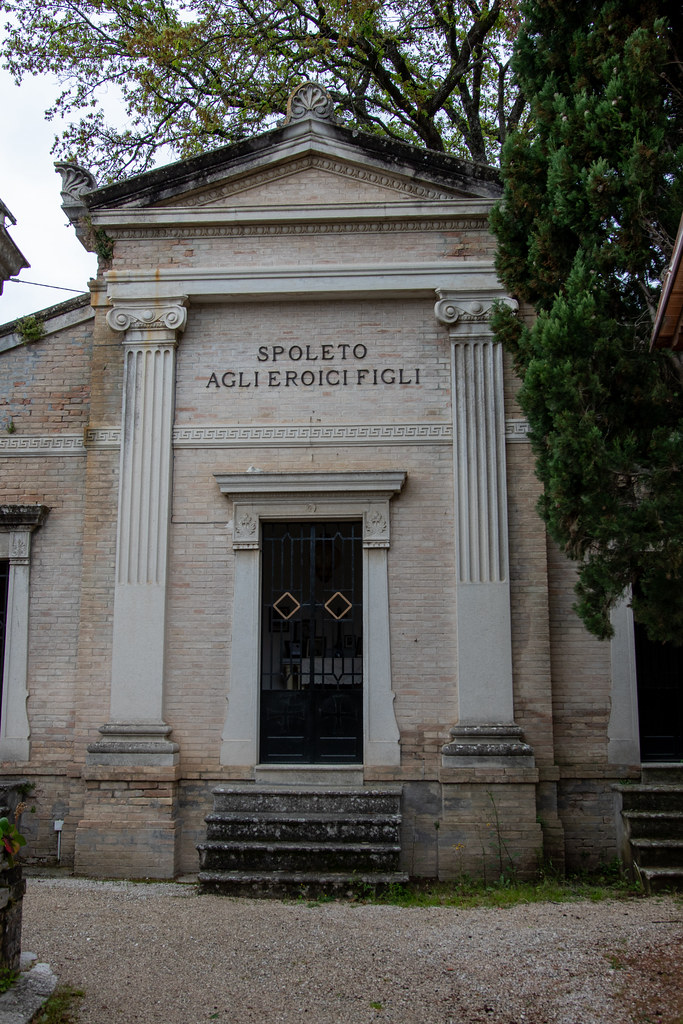 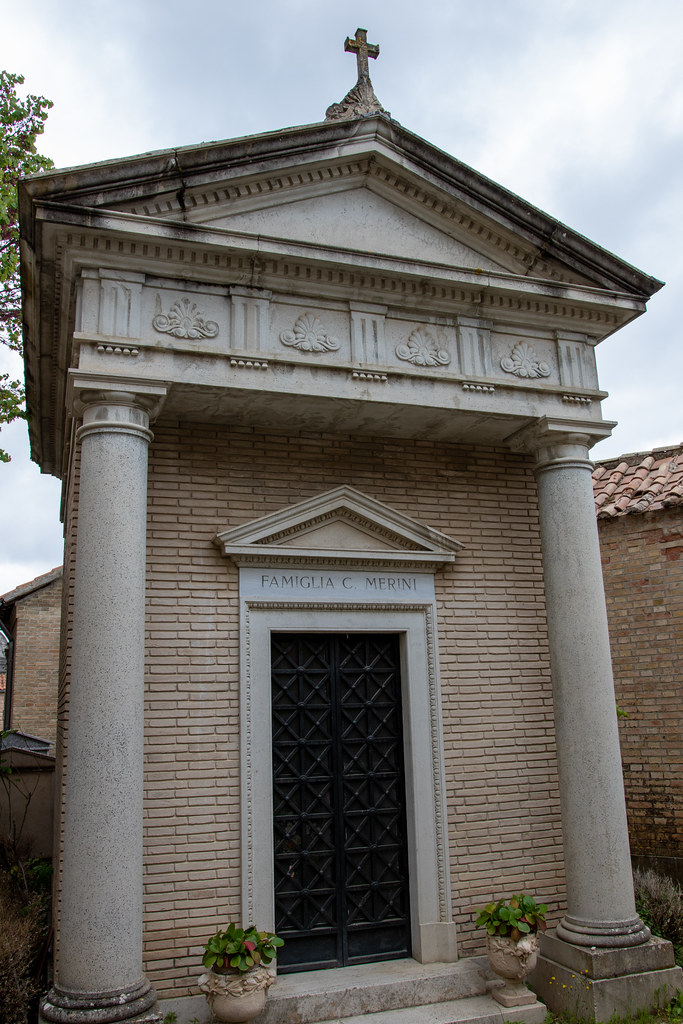 On the other hand, I was able to visit the small temple of Clitunno, north of Spoleto. This temple is on the road from Spoleto to Assisi, but it is very difficult to find, and if you go north from Spoleto, you can’t park in a space nearby because it is on the other side of the road.

To get to this parking space, you’ll have to go south from the north towards Spoleto, as the road is big and traffic seems to be there, so you won’t be able to get in first. It’s really hard to find so be careful if you do go.

I parked my car in the parking space somehow, and followed the signs to the temple. There was a small hut at the entrance where we paid the entrance fee and went inside, but there was no sign of anyone, which made me wonder if there was really an attendant. However, when we approached, we found it was open and we could see the small temple after paying the entrance fee of 3 euros. 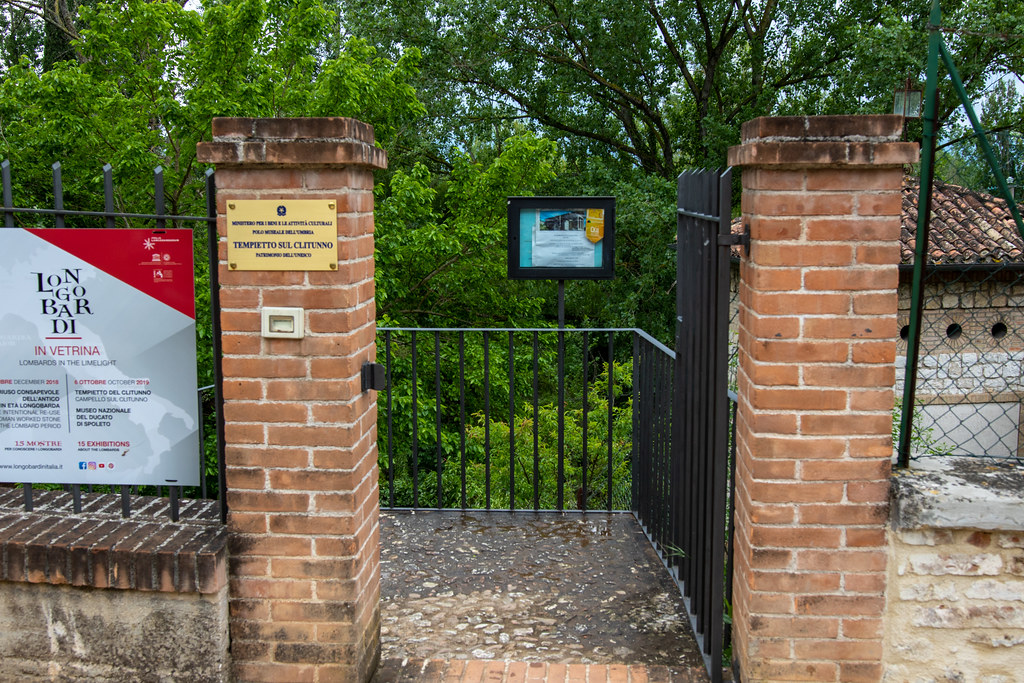 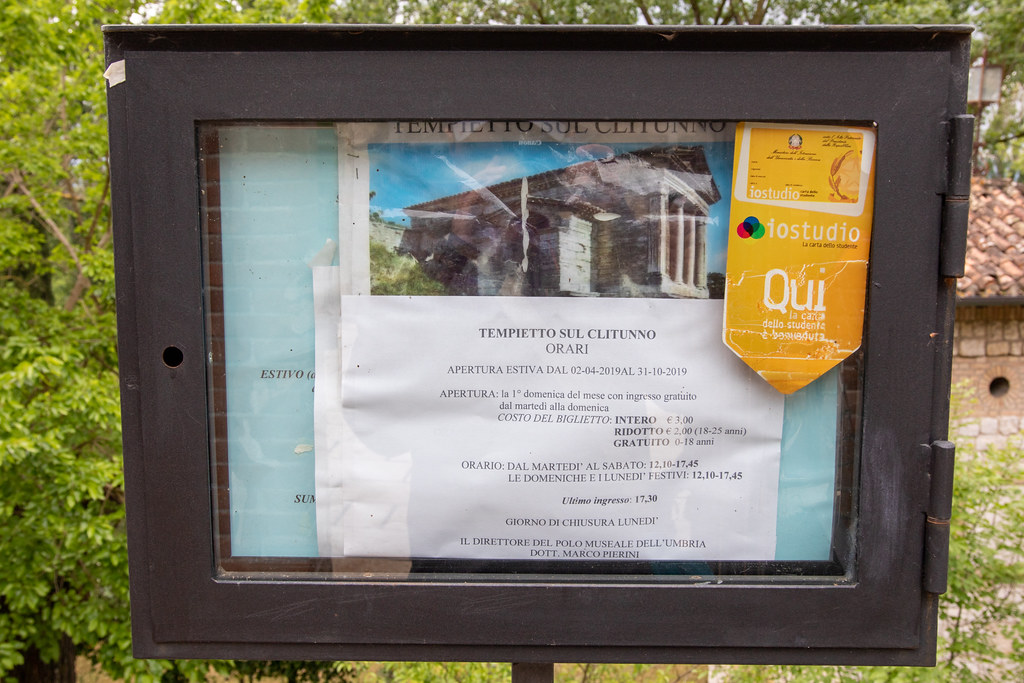 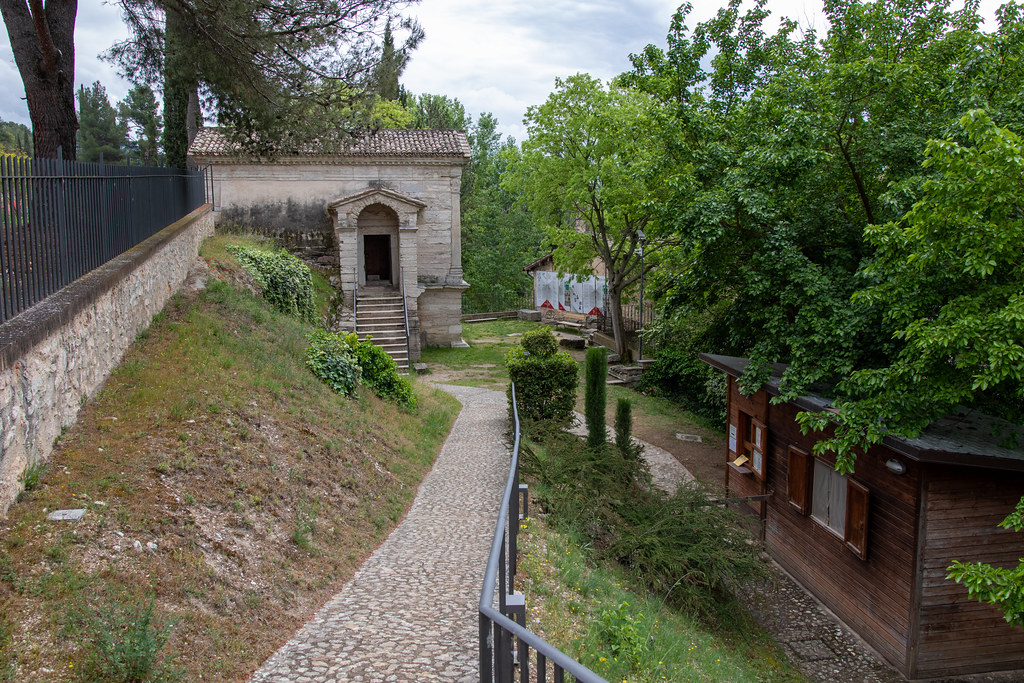 This small temple is small in size, but it certainly gives me a strange feeling of being both Greek and Roman, but neither of them. 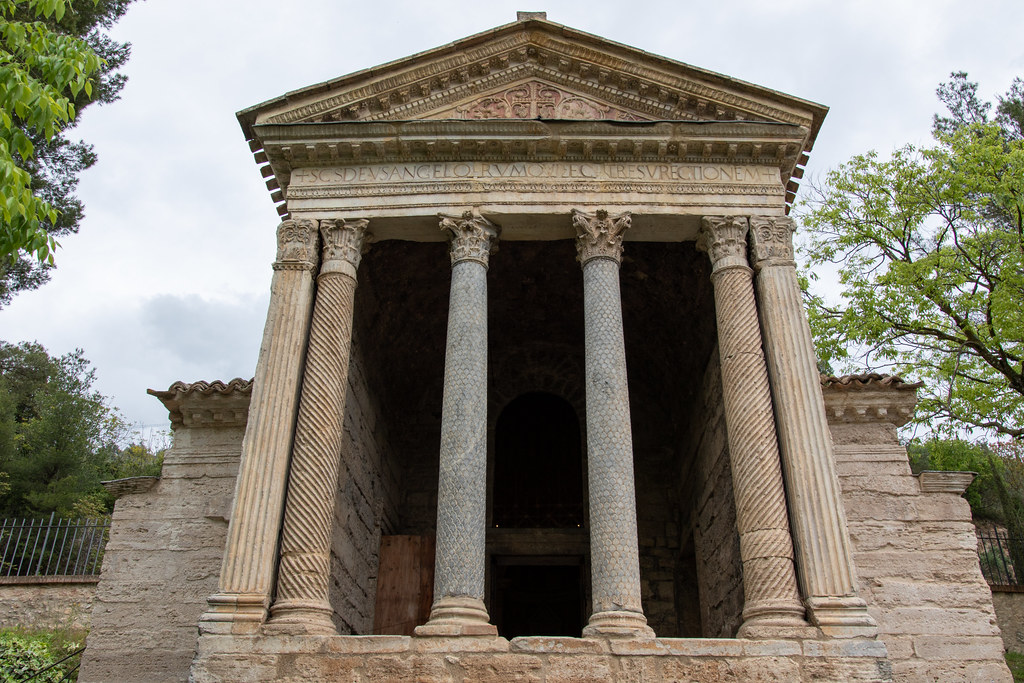 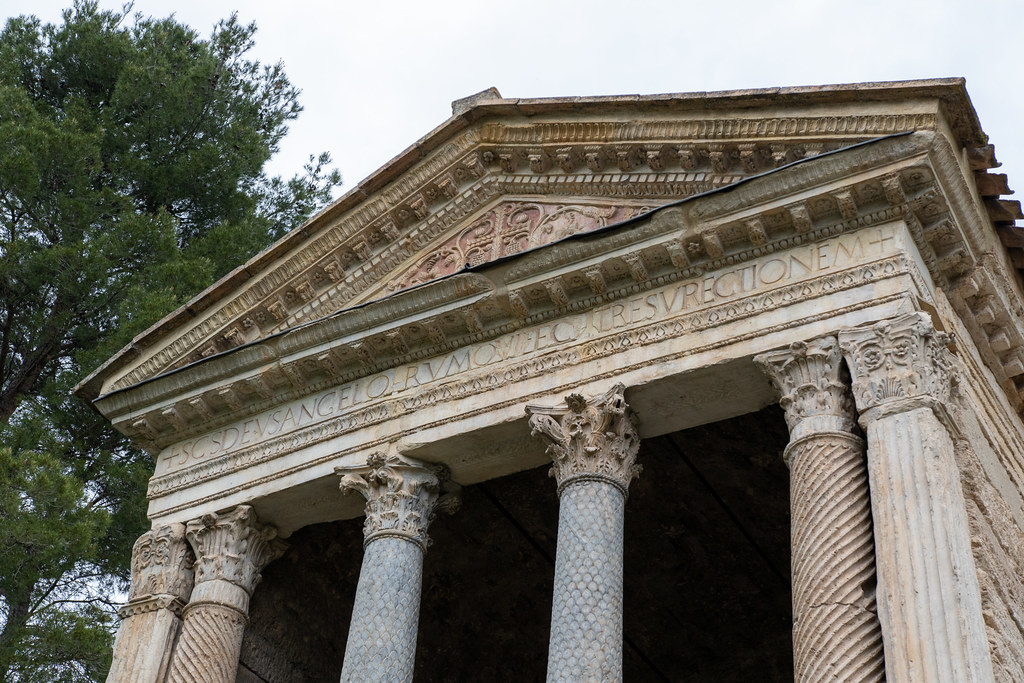 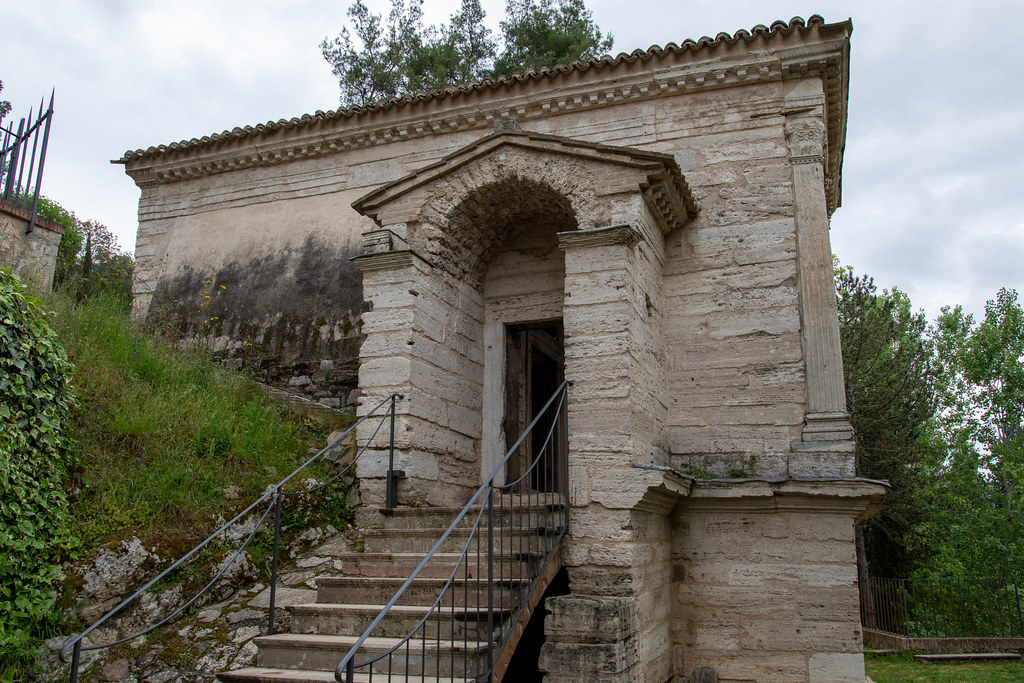 It looks like a temple, but it is a Christian building. The icon of Christ is clearly depicted in the center of the interior. 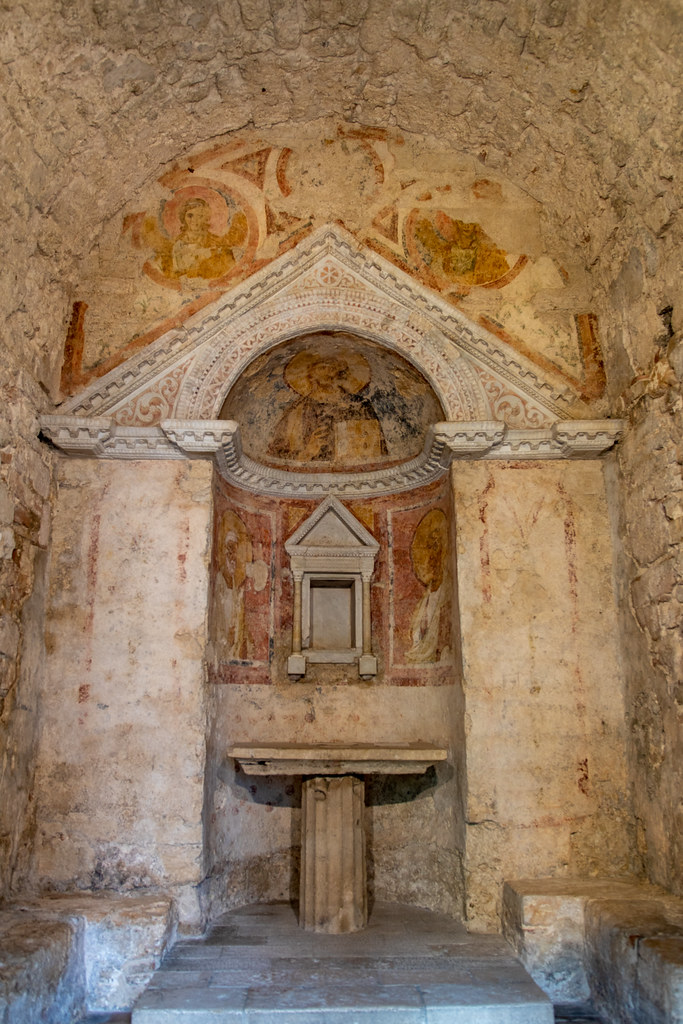 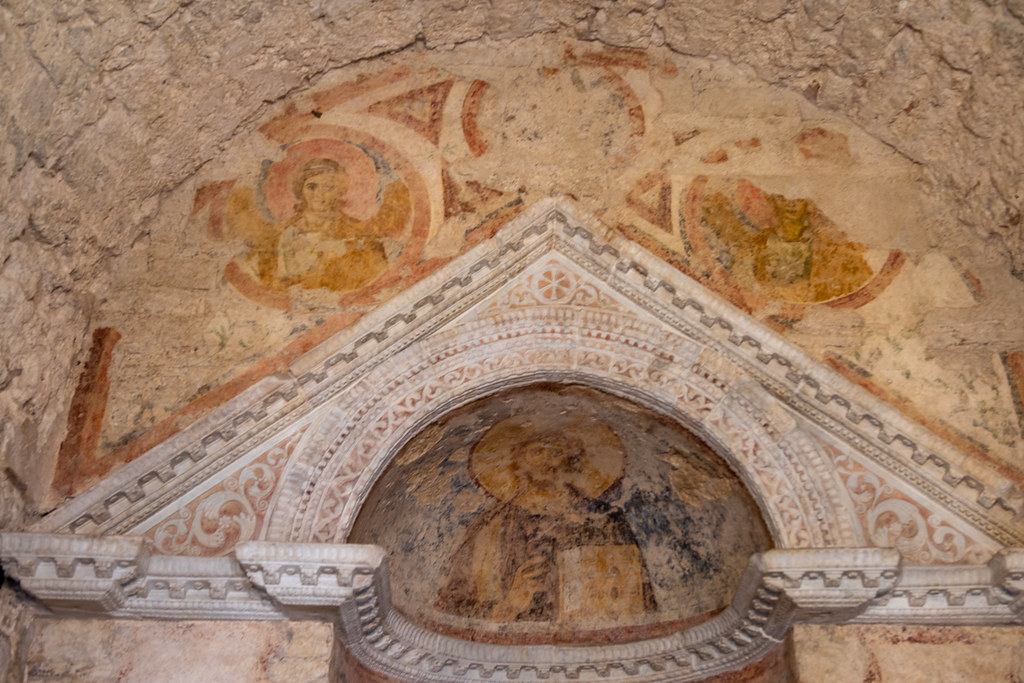 When I think about it, I don’t recall ever seeing a temple-like building with an icon of Christ on it.

Facing the temple, there was a panel explaining all the registered properties of the World Heritage Site « The Longobards of Italy: Footprints of Power ». 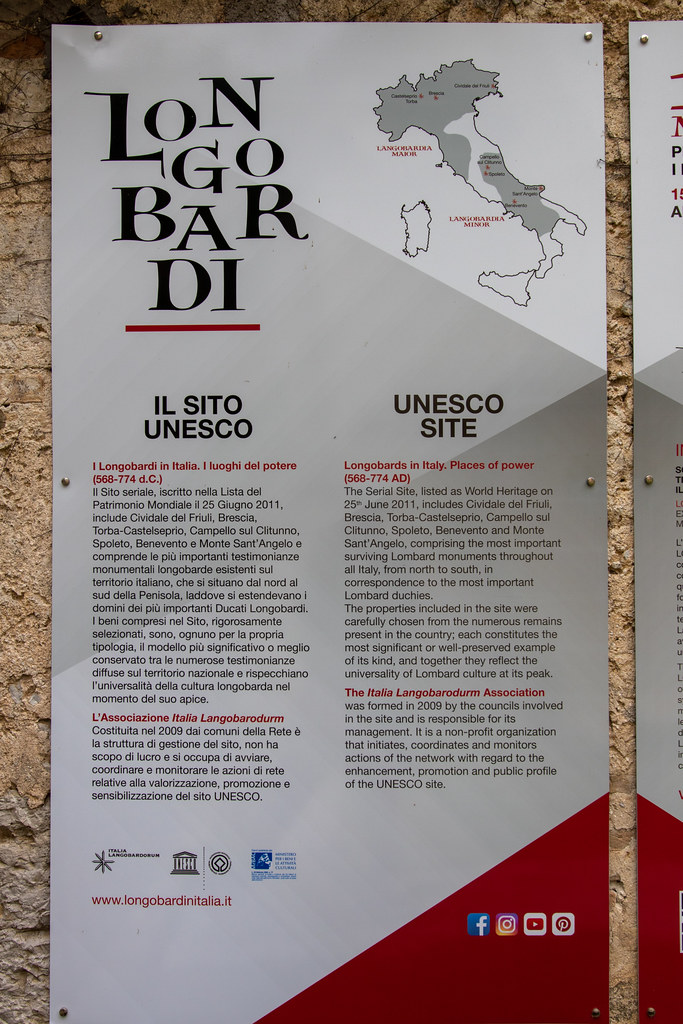 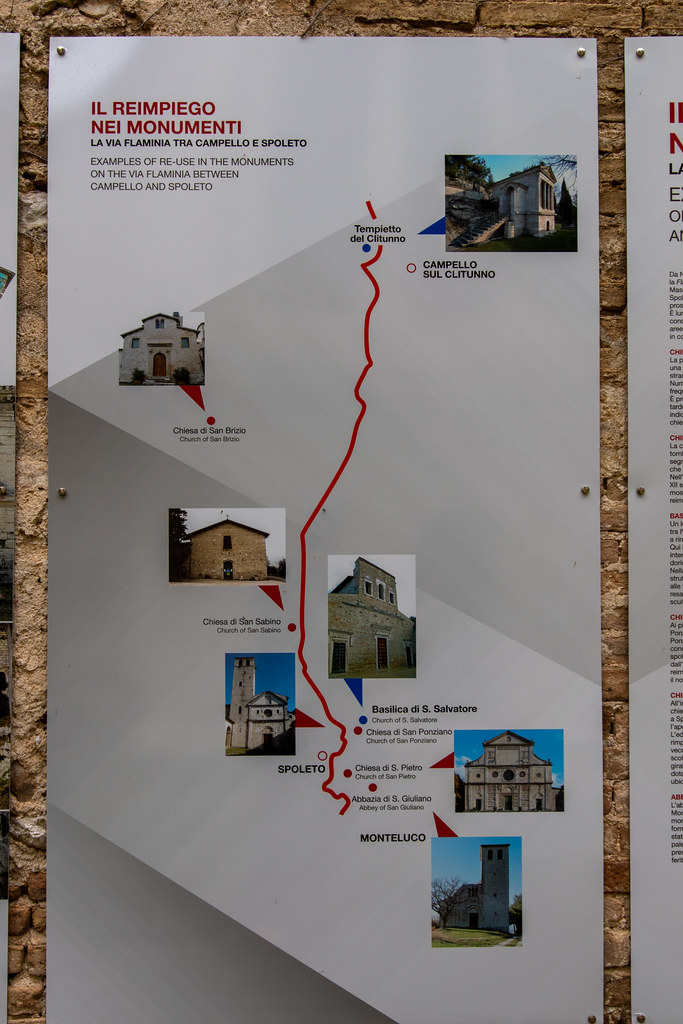 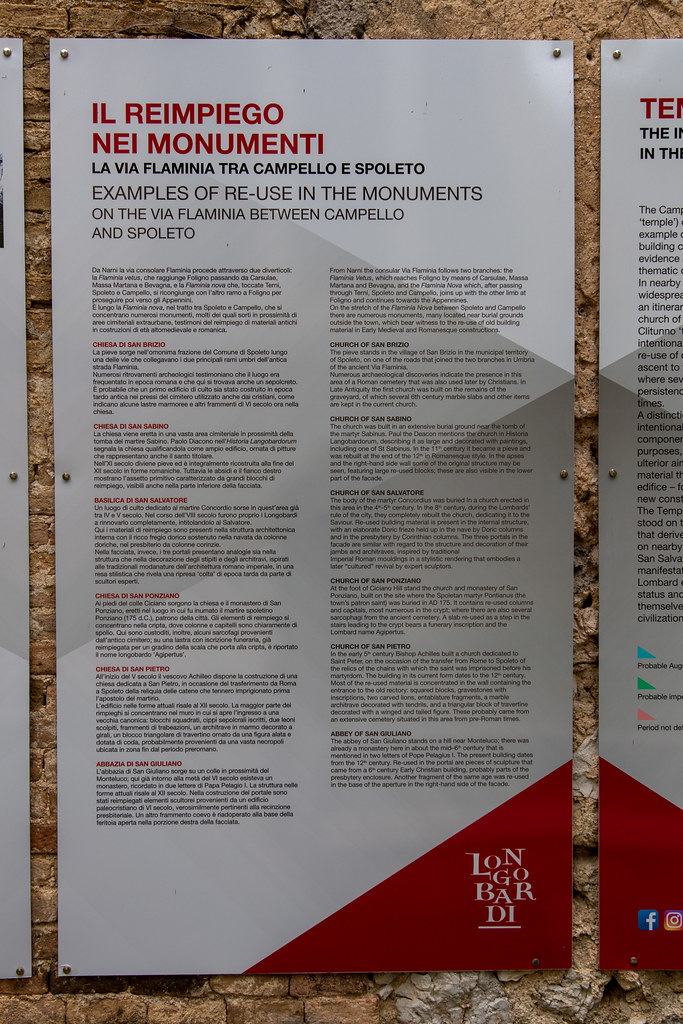 From this panel, we found that there are quite a few constituent assets that are not listed in the Japanese Wikipedia. Among them, there are some that I couldn’t find on the web, and there are also some around Spoleto. However, except for the Basilica di San Salvatore and the small temple of Critunno, I gave up to visit them because they were located in the suburbs and the road seemed to be steep.

In addition to Umbria, there are other regions that are included in the World Heritage List. It is spread widely from Udine in the north to Puglia in the south. If you have a chance to go near there, I would like to stop by. The registered properties in Lombardy are large in scale and seem to be worth seeing. The one around Spoleto, which I visited this time, seems to be the smallest one among the constituent heritage.