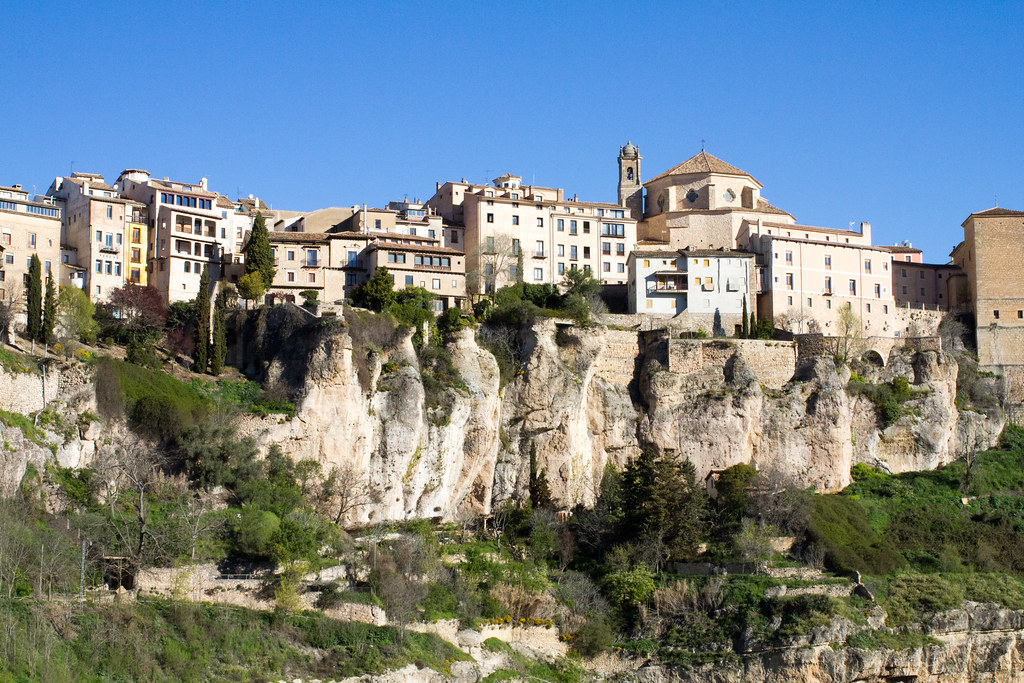 One of the objectives is to visit the World Heritage Sites

From this issue, I would like to introduce « World Heritage Sites » in Spain that I visited in GW 2016. Of course, visiting World Heritage sites is one of the purposes of my trip. Especially this time, I visited more than 200 sites in total, which was a memorable trip.

The following are the new World Heritage Sites we visited on this trip. Spen is the 28th place in total.

In addition, I visited the World Heritage Sites that I have visited in the past, such as Segovia and Barcelona, which I will write about later.

Cuenca’s location, how to get there

Cuenca is the first destination of this trip. We planned to stay here for one night. First of all, I rented a car at Madrid Barajas Airport, and then I drove for less than 3 hours to get there. It was easy to drive because we drove mostly on the highway. It was a good rehabilitation for me to drive on the left and right side of the road after 6 months. 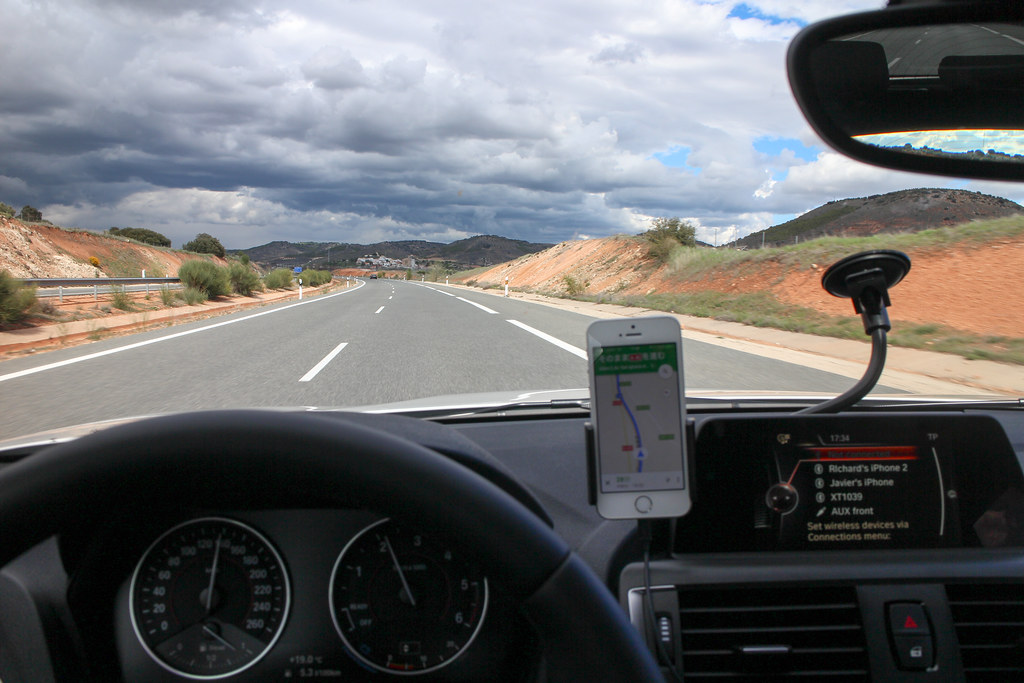 In addition, this time the car is a BMW. 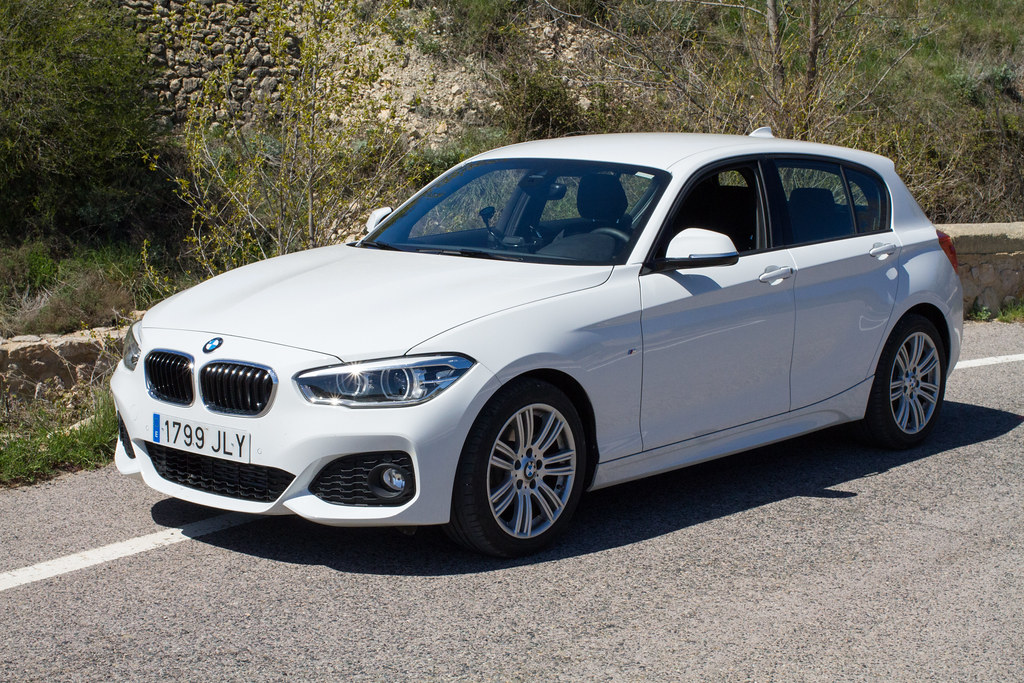 This is my second time to drive BMW in Europe, and I chose this car without hesitation because it is a BMW, but it is small and has a turbo engine, so it is suitable for me. It’s a BMW, but it’s small and has a turbo engine, so it’s perfect for me. This is the car that changed my mind about BMW. I have never been disappointed with the rental car in Spain.

The origins of the town of Cuenca lie in a cliff-top fortress built by the Muslims in the 9th century [3]. It developed from a fortress into a city during the post-Humayas period, but Alfonso VIII of Castile took it in 1177 and Christianized it as one of the main cities of the Kingdom of Castile.

Basically, it can be said that the area of Spain except Andalusia came under the control of the Christian state again by Aragon or Castile around the 12th century.

Satellite view of the city of Cuenca (from Google Maps)

First place to stay on this trip

We arrived at the hotel after 18:00 and stayed here for one night, the first place to stay on this trip. The location of the hotel is almost in the middle of the old town. As for parking, I already confirmed on street view that there is a public indoor parking lot nearby.

Following the Google navigation system, we passed the central square of the city and easily reached the parking lot.

It was late, so we relaxed a little at the hotel and went to eat. However, there were not many restaurants in the provincial city, and we could only have a light meal at a bar after all. I was still not used to bars.

Still, we enjoyed the meat-related tapas along with cheap and delicious wine.

The hotel was normal and nothing to write home about.

The atmosphere of the city

It was the next day. Sightseeing in this city is basically a city walk. If you just walk around by yourself, because it is a small city is enough to have two hours. The back alleys are also very nice. It would not be an exaggeration to say that the alley appreciation is the best part of walking around in Europe. First, we started from the alley in front of the hotel. 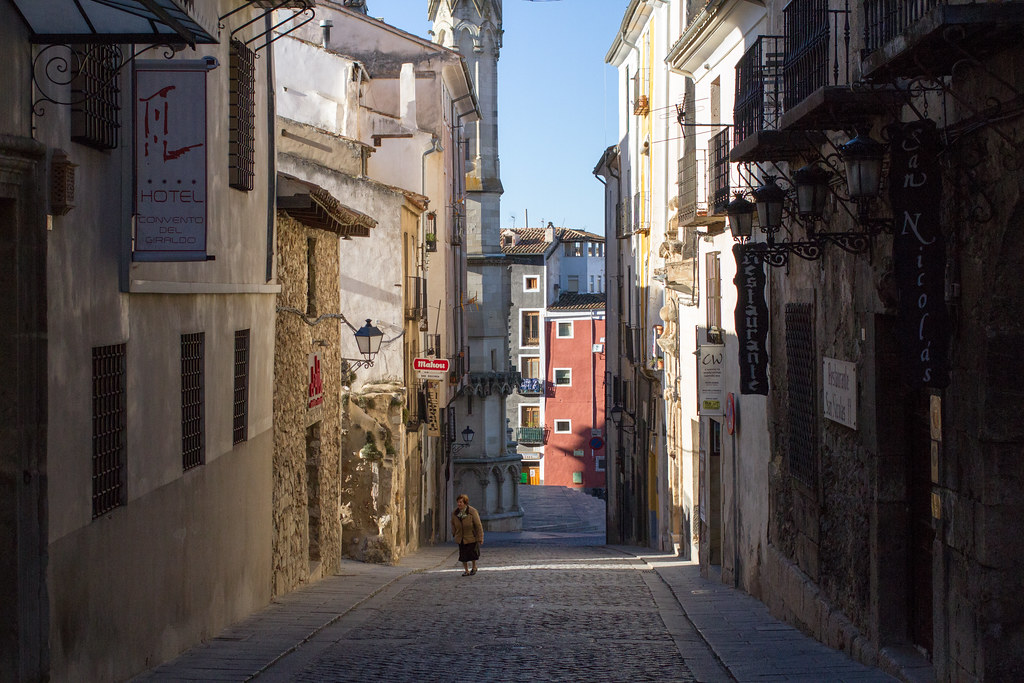 I took a walk around the area. 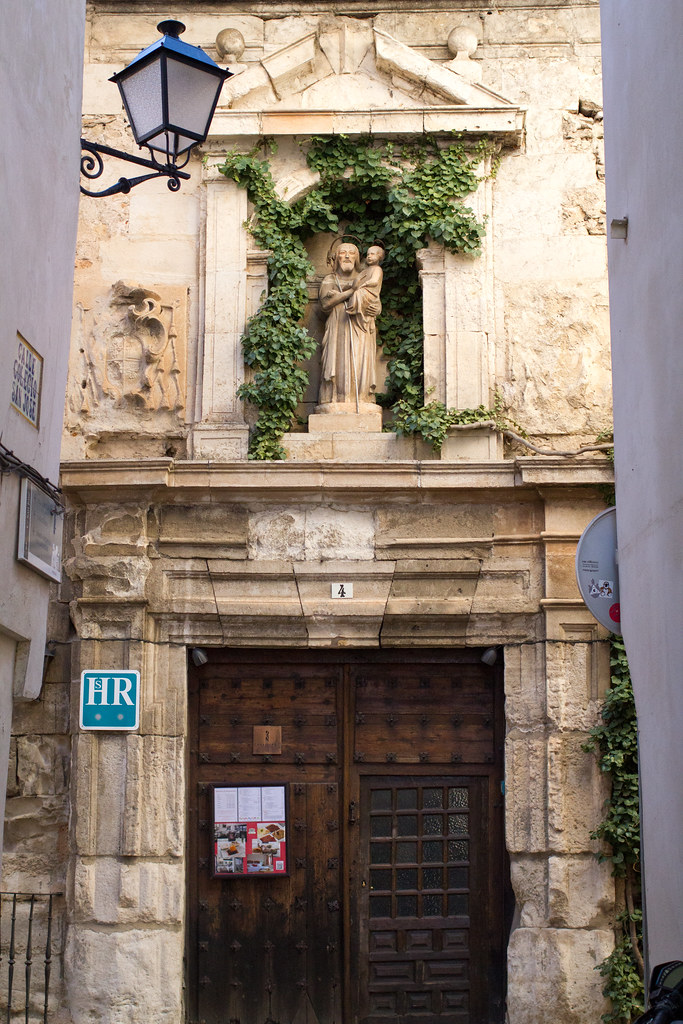 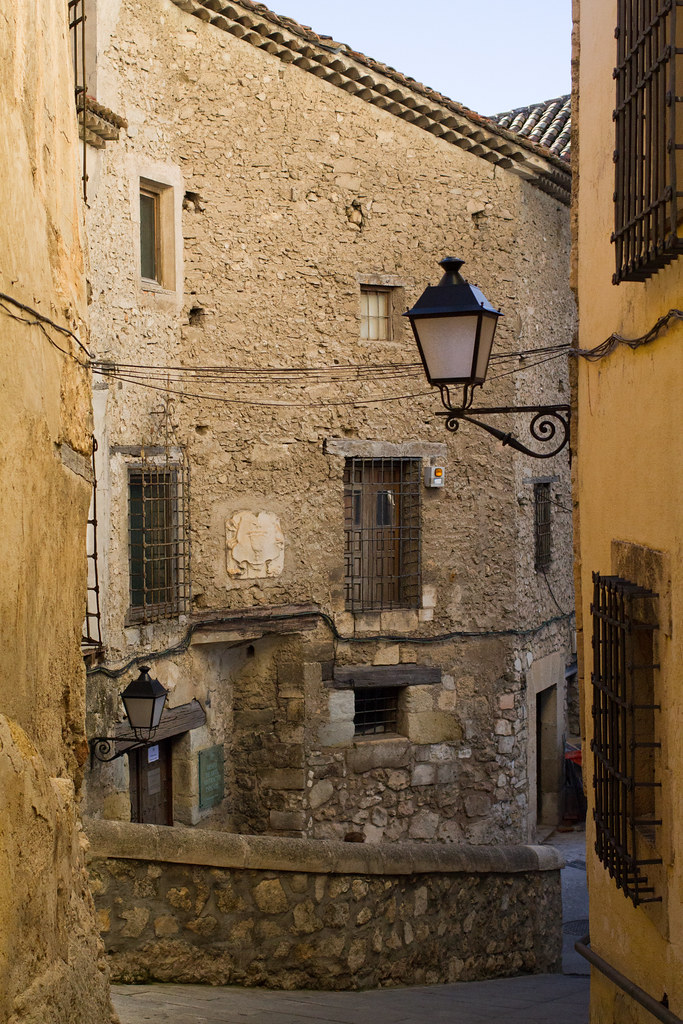 This is the center of the city, « Plaza Mayor ». It looks like the city hall is in front. 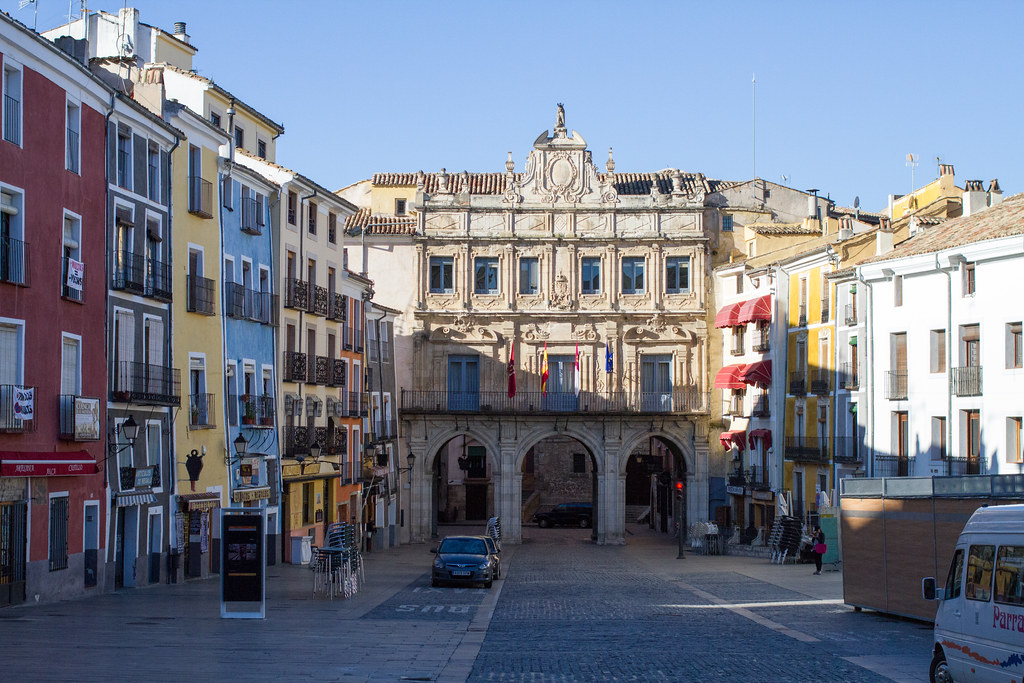 The area in front of the plaza is a normal road, and there was some bus traffic. This might be a disappointing point. I thought it would be better to close it because it’s the old town… Why don’t they make it into a cobblestone square and make it a place for relaxation, as they do in many European cities?

And the Cathedral in the Plaza Mayor. 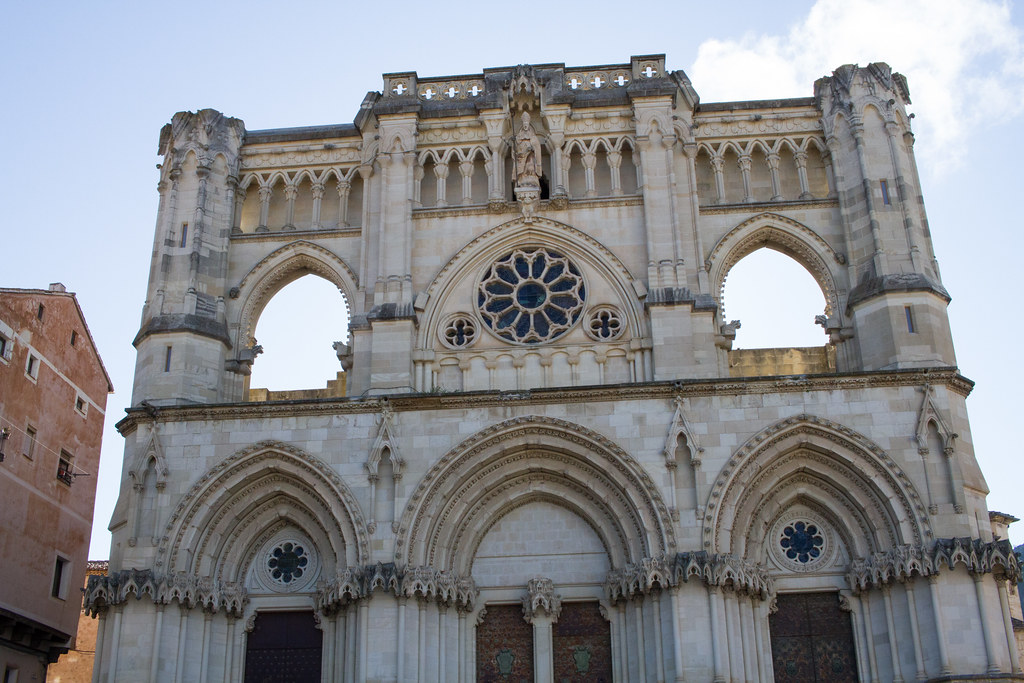 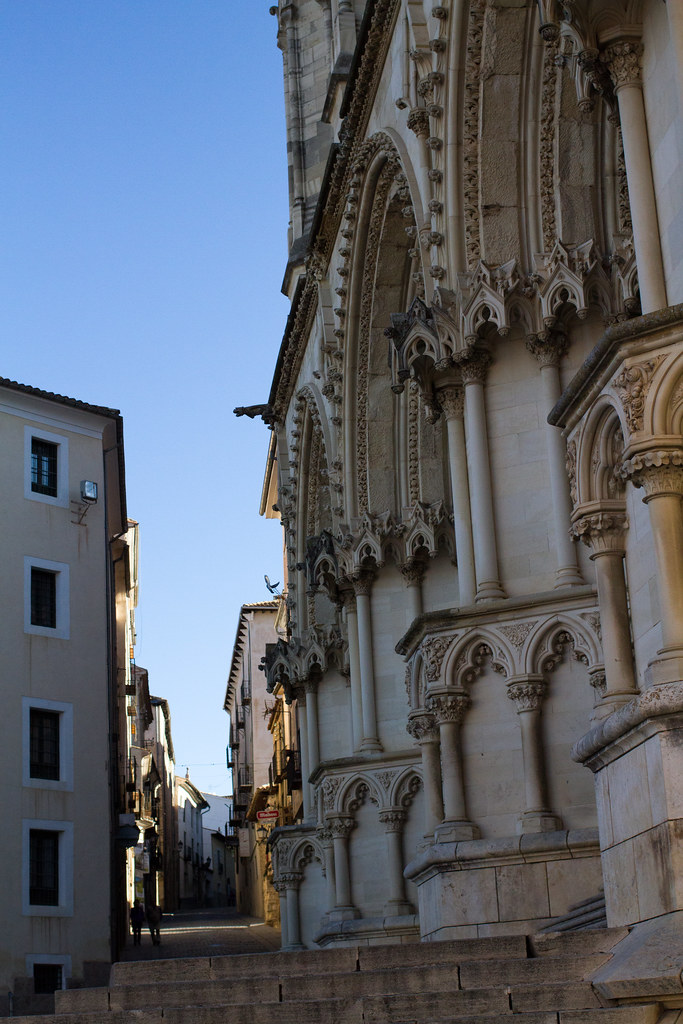 I couldn’t visit the museum because of time constraint. They close at 7pm. And there is probably a siesta. Many churches in Spain have limited opening hours, so it’s hard to make a schedule.

It’s a beautiful day, though. We moved on to the famous « hanging house » of this city. It’s just a minute away from the square. It’s not so beautiful building, but it’s famous. 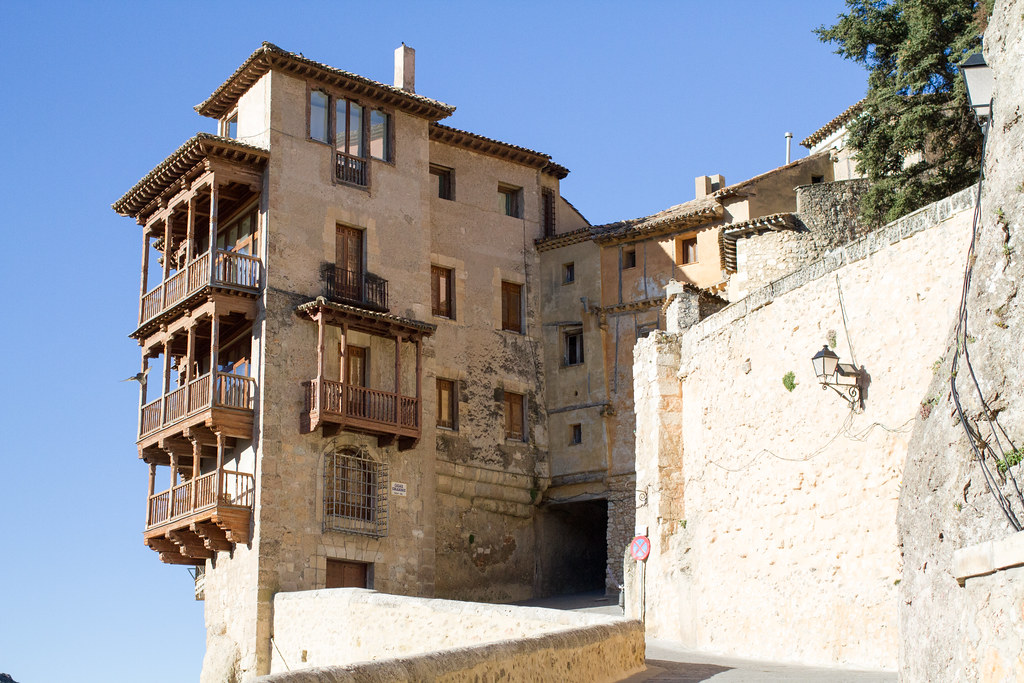 There is a bridge over the canyon in front of this hanging house. If you are afraid of heights, you can’t cross this bridge. I’m very excited about heights, so it was very fun. But it was still a bit scary. 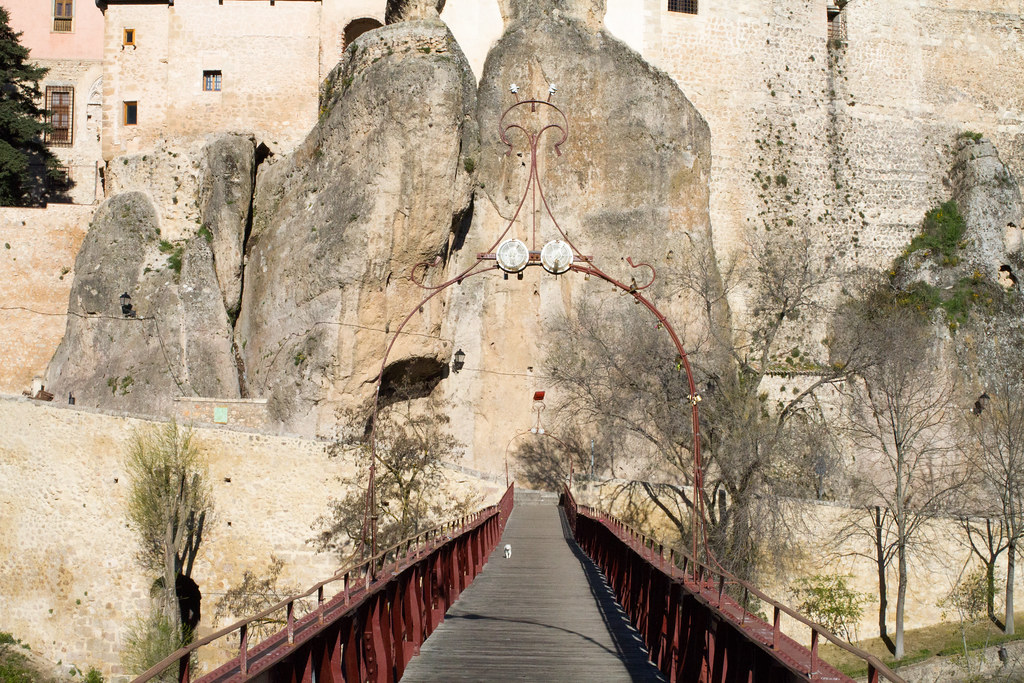 When you cross the bridge, you will find the « Old San Pablo Monastery », which is now a parador. I didn’t stay at the parador because I was a solo traveler on the first day of Cuenca sightseeing. It was too expensive. 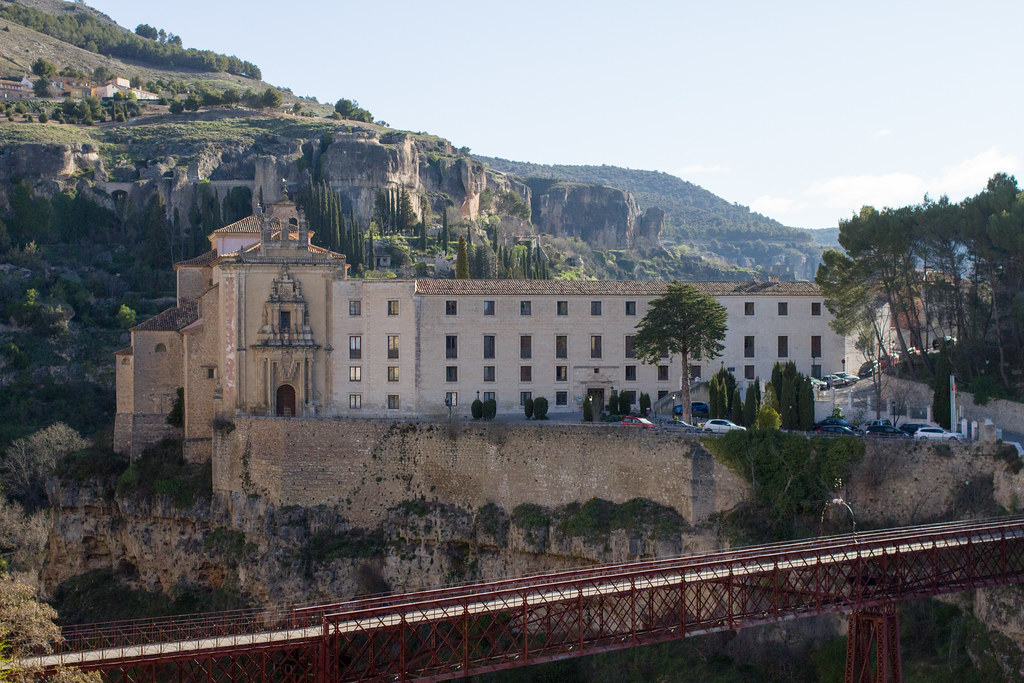 The view of Cuenca from this bridge and the parador on the other side of the river was very impressive. The bridge or this parador is a great view point.

Finally, we head upwards to the upper part of the city. You’ll pass through the gates and out of the old town, admiring the impressive Cathedral of San Miguel. 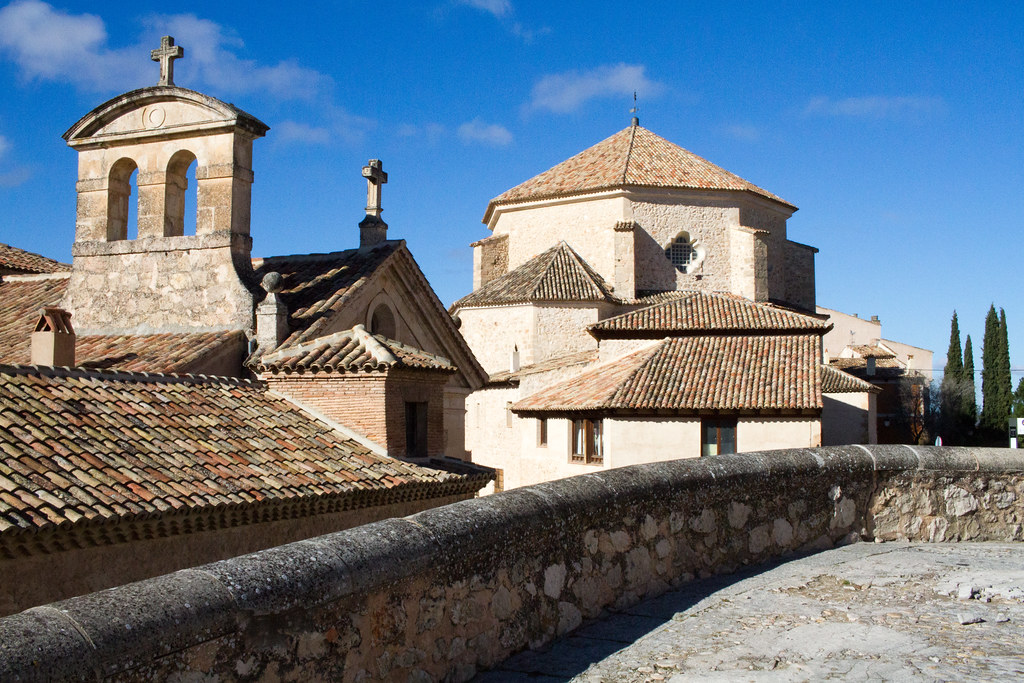 There were many restaurants and hotels in this area. There’s also a walkable sidewalk. 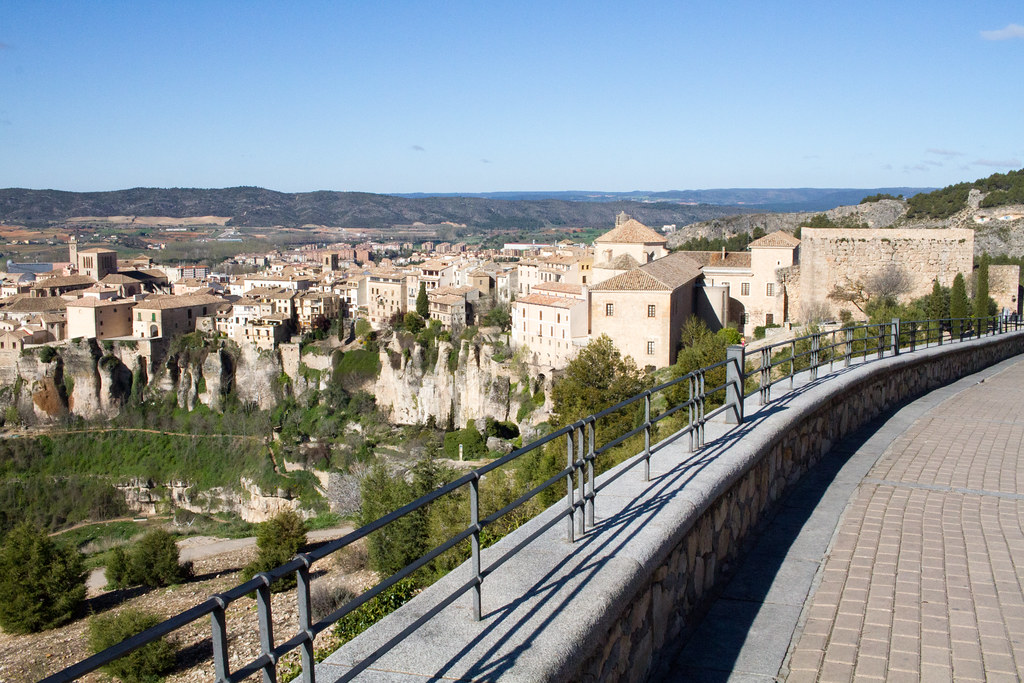 It is less than 5 minutes walk to the Plaza Mayor in the center of the old town, so I might not have been forced to stay in the old town. And we had a hard time to find a restaurant the day before.

This is the end of the sightseeing tour. 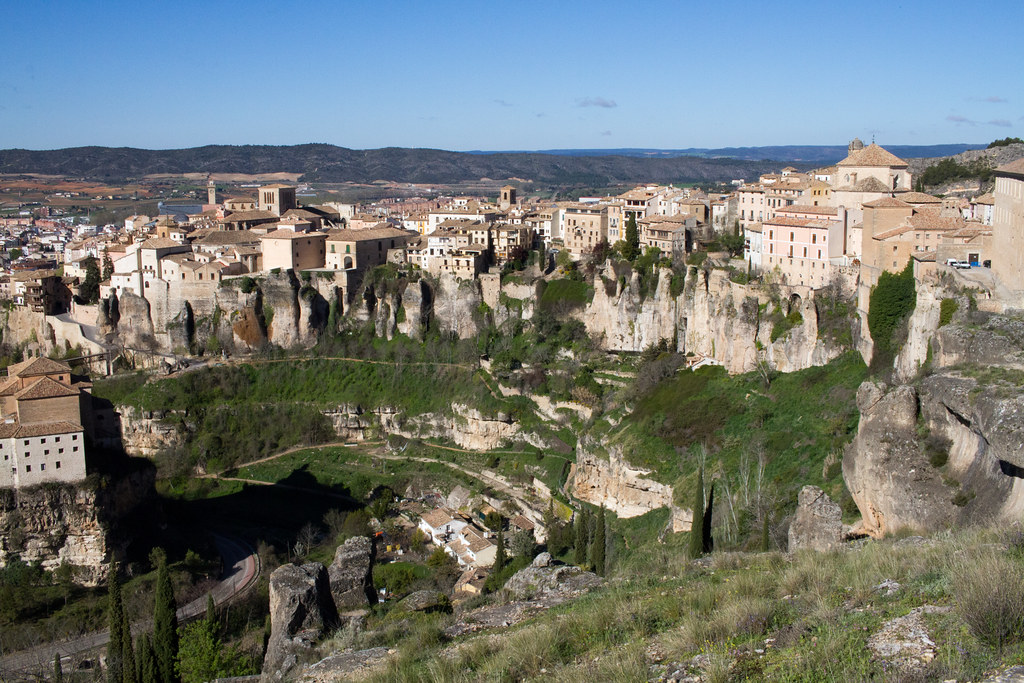 Parking in the Old Town area 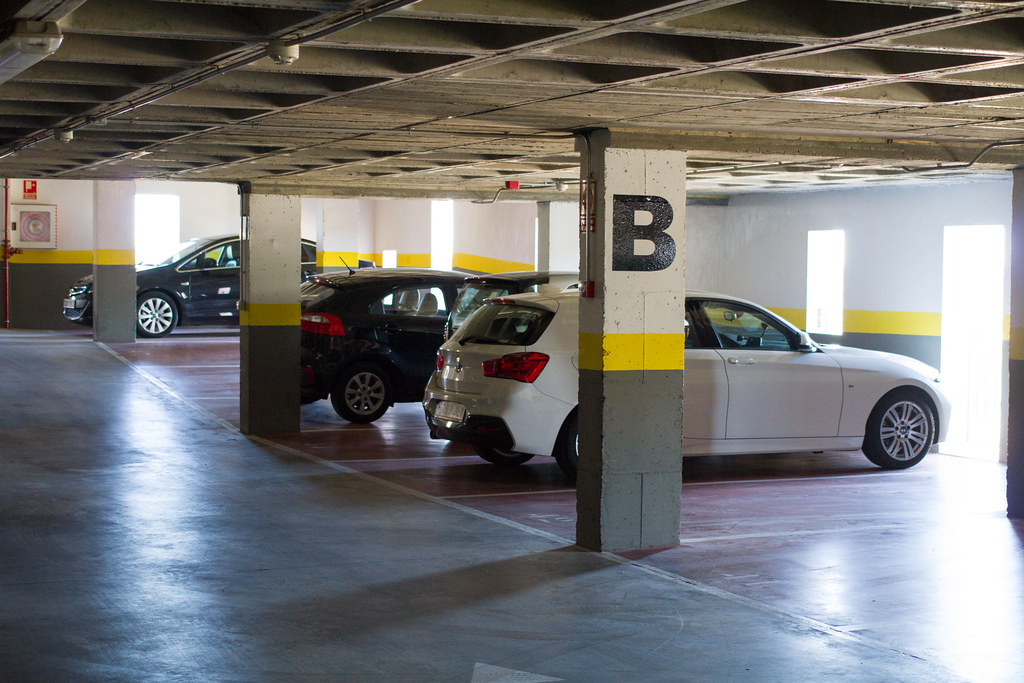 This was the area on the map.

World Heritage Site: 3 castles, defences and ramparts in the old town of Bellinzona: Switzerland and France Travelogue No. 6, September 2017

We had a terrific trip from the Basque Country to the Limousin region. Yesterday was a very productive day. Ainhoa（アイノア）...