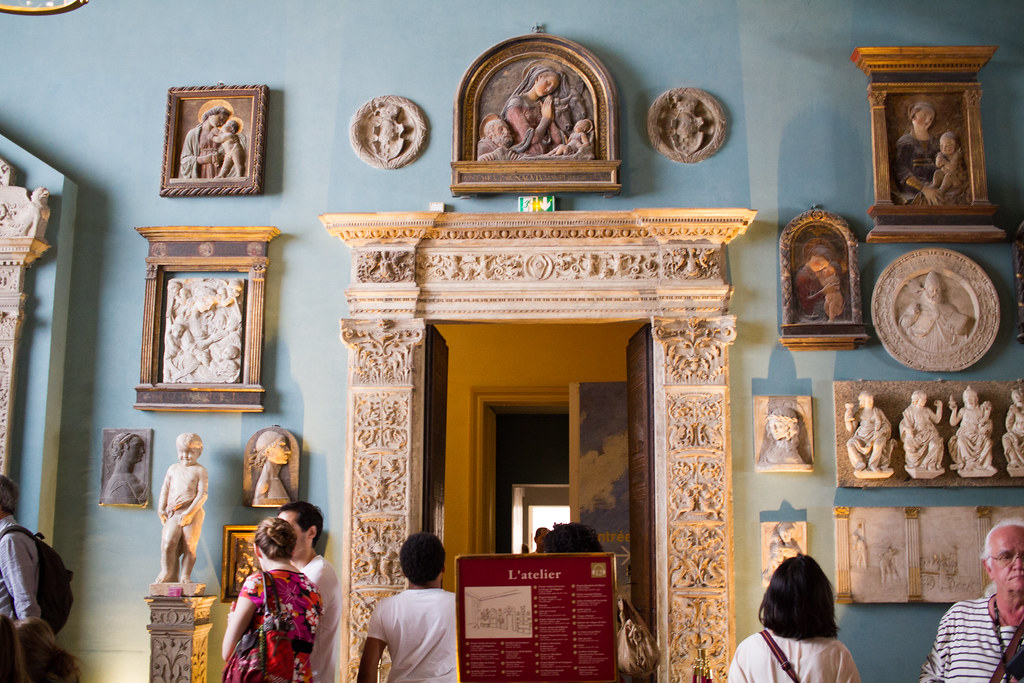 It’s already been almost half a year since I finished this trip, and this is finally the last story of this travelogue. It has become long as ever.

And I’ll close with an impressionist.

The last topic is still art. After returning the rental car, I stayed in Paris for two days. The main purpose was to watch the final stage of Tour de France, which I already mentioned, but art appreciation was also the first purpose of this trip. I wanted to do some food-related shopping, but since the season was summer, I decided not to buy things and to take my time sightseeing.

This site in Japanese is also very helpful.

By the way, this museum is a little far from the nearest subway station, so it is a little difficult to get there.

The permanent exhibition opens with a look at the collection of Edouard André and Nelly Jacquemart, who once lived here, and the interior of one of the most magnificent mansions in Paris. 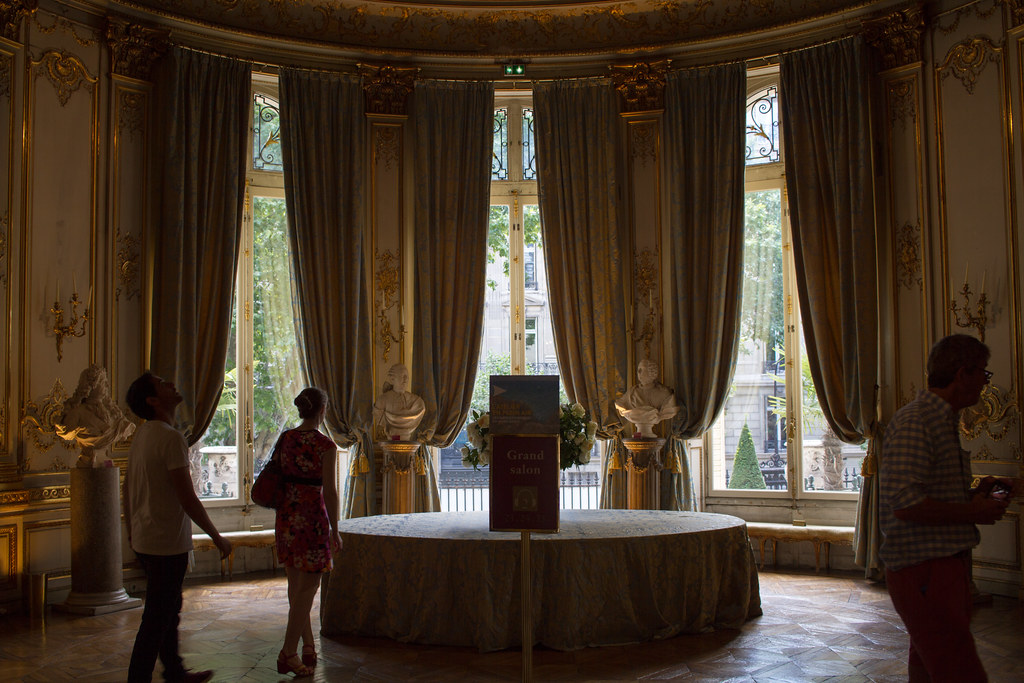 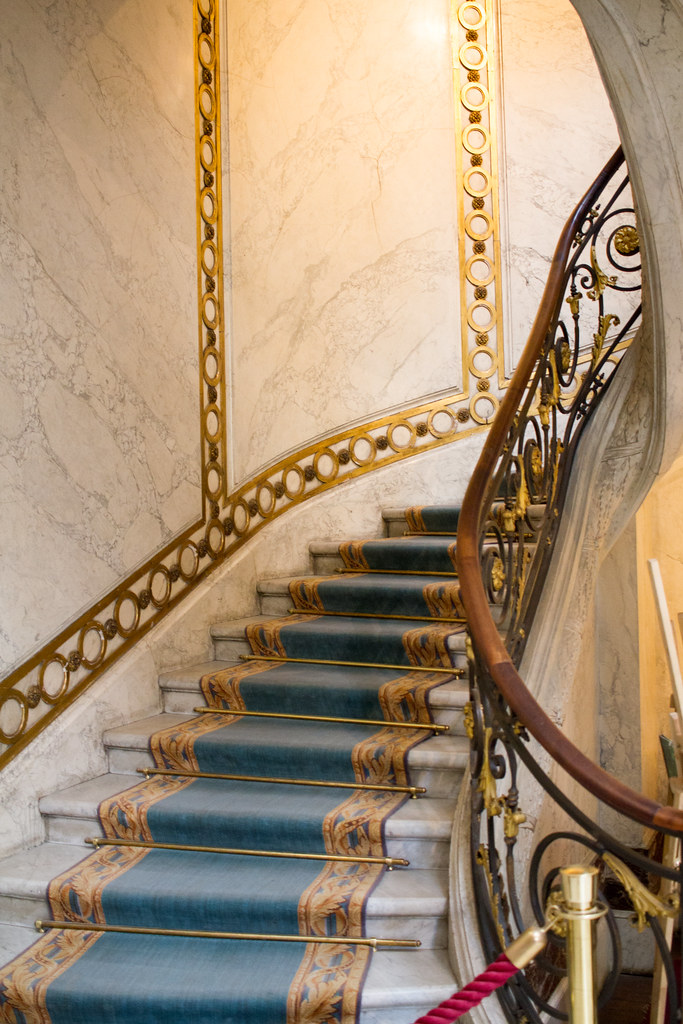 Although photography was not allowed in the special exhibition, I felt like I was reviewing the Impressionist Festival special exhibitions I had visited so far, for example, all the Etruscan paintings written by Monet and others were displayed. Fortunately, I bought a simple commentary called « Le journal de l’expo », which was sold at the site, so I will introduce the contents of the exhibition briefly from there.

I remembered that I could see many Morisot painted in Normandy at the Boudin Museum in Honfleur, although I couldn’t introduce them in detail. There were also a few in this Jacquemart-André museum. It is the one in the upper right of the following picture. (But to be honest, I couldn’t remember it very clearly.

This is the apartment and studio where Delacroix lived from 1857. He chose this place because it was close to Saint-Sulpice church.

It’s a very small museum, and there are not so many works on display, but the atmosphere is quiet, so I was able to enjoy it calmly from beginning to end. A Japanese journalist was there to cover the exhibition. It might be a common sight in Paris.

In addition, I bought a common admission ticket to the Louvre because it was sold. It seems that the Louvre belongs to the museum since 2004. So let’s stop by the Louvre just before leaving.

Lunch at the Odeon

Then we headed to the Delacroix Museum, and next we went to Catacomb, but it was closed on Monday the 25th. So we decided to have an early lunch since we had some extra time left. We decided to have lunch at this restaurant which was on my friend’s recommendation list. The place is about a minute walk from Odeon station.

We ordered Carre d’agneau, lamb on the bone.

It was good to start with. But it wasn’t that amazing. It’s in a good location and if I had the chance to visit at night, I’d probably mention it. I guess reservations are a must then.

Well, I also ordered a glass of wine. There is no driving any more, so you can drink without hesitation. However, the weather was cloudy, but it was hot, so we also ordered water. I wanted to drink soda.

Montmartre Museum in the afternoon

After lunch, we took a short trip by subway for 30 minutes. We went to Montmartre. The purpose of this trip is also to visit museums. I was a little nervous because Montmartre was still downtown, but I felt it was much better than before.

Now, our goal is « Montmartre Museum », a very small museum. This used to be Renoir’s studio. For example, his masterpiece « Le bal du Moulin de la Galette » was painted in this place.

I think this « La Balançoire » is one of his famous paintings. It seems to have been written in this studio. I think that the present swing is a replica.

There was also a special exhibition here. The exhibition was called « Artistes à Montmartre ». 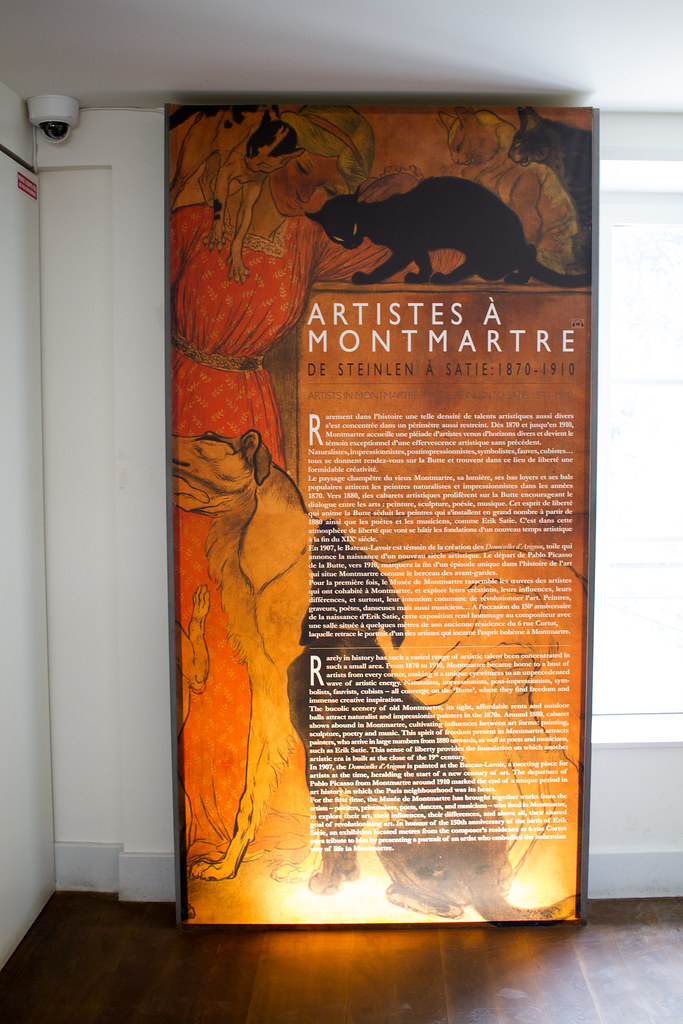 The man in this painting seems to be Erik Satie. It seems that he was giving a lesson to a certain lady in Montmartre. 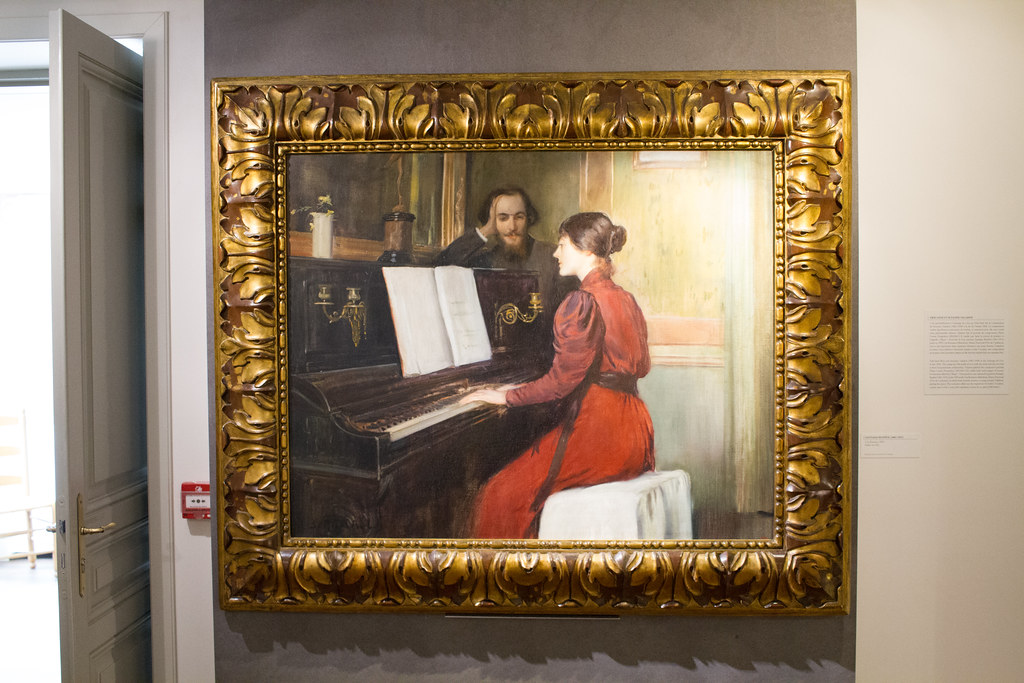 Other than that, though, there were a couple of paintings in the exhibit. 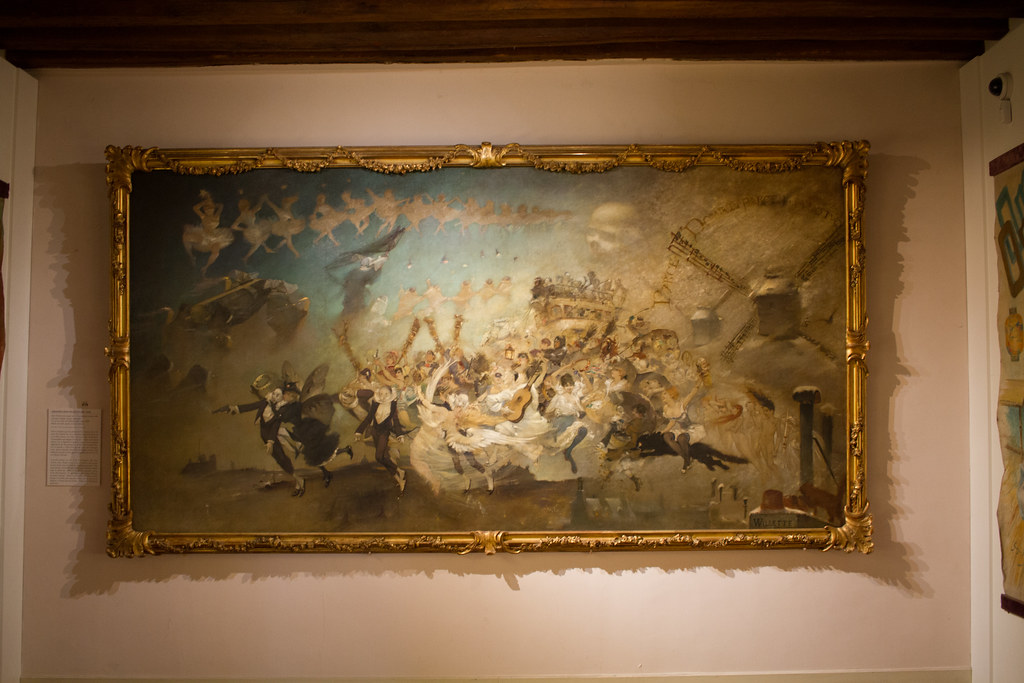 Posters related to the salons and bars that existed in Montmartre were on display, especially posters and menu lists related to Chat Noir, which was also a hangout for artists. 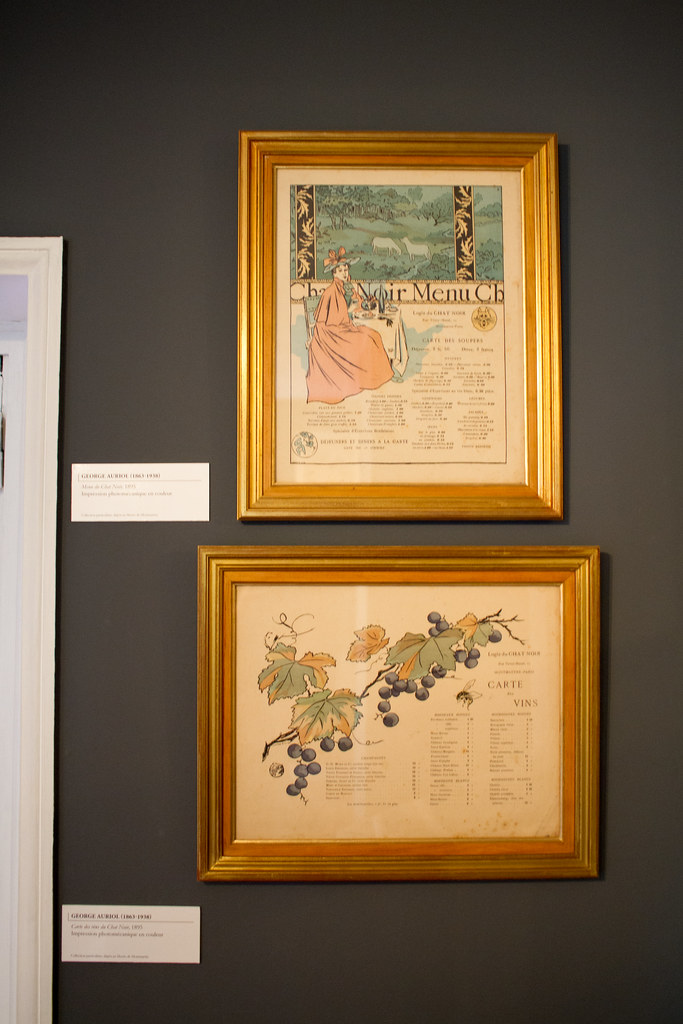 To be honest, I didn’t find it very impressive. I would have been grateful if the museum would have covered more of the period that Picasso and others spent in the early 20th century. I thought that this museum should work a little harder. I think all the good paintings are concentrated in Orsay.

We went back to the center of Paris and finally went to the Louvre. It was about 16:00 at this point. Because I bought a common admission ticket at the Delacroix Museum, I came here just to say hello at the end. In contrast to the museums I visited today, which were all small and calm, it was crowded with many people and noisy. I felt that it was just too noisy. I don’t think I’ve ever felt so noisy in the past…

I went to the Italian painting area which I like most. The Mona Lisa was crowded as usual, so I just flashed it lightly.

It was about 4pm when we left the Louvre. I had to go back to the hotel to pick up my luggage. On the way back, I bought some cookbooks at a bookstore in the Sorbonne and went back to the hotel. It was raining on the way, but I had an umbrella with me because the forecast said it would rain.

Then I picked up my luggage and took a taxi to Montparnasse station, and then took a bus to Charles de Gaulle airport. After check-in at the airport, I went shopping at the duty free shop. Then I boarded a plane and went back home safely.

This concludes the July 2016 France « Impressionist and Gourmet Trip » series. It’s already been more than half a year since this trip.

In particular, over the past year, I’ve changed my style of blogging from simply pasting photos and commenting on them, as I used to do in the past, to writing well, referring to local pamphlets, guidebooks I bought in the area, and websites in the local language (French this time). As a result, the speed of updating the blog has slowed down, but I think my posts have more substance than before, if I do say so myself.

Next week is already March and we are already preparing for our next Golden Week trip. We’ll be back with more information in this blog.

It's around lunchtime, but this is the Pola Museum of Art, which was actually the meeting place for this trip.I've been ...