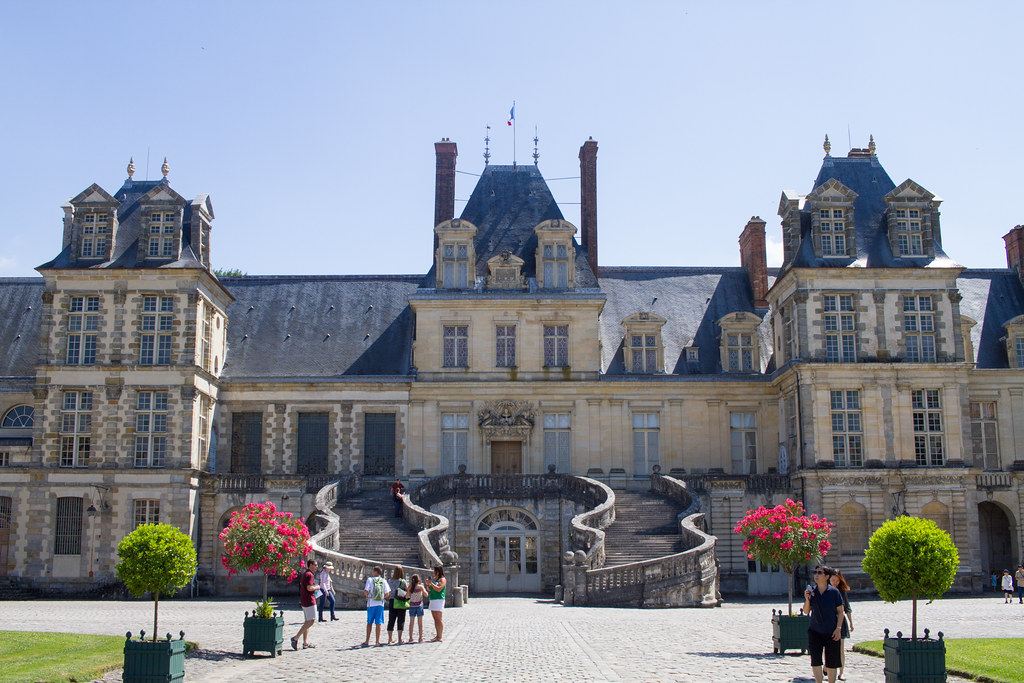 Last day of car rental, back to the Ile de France

I started this trip on July 14, so this day, the 23rd, is exactly the 10th day of my trip. On the 22nd, I stayed in Auxerre in the Yonne department of Burgundy region. On the 22nd, I stayed in Auxerre, which is located in the Yonne department in the Burgundy region. I left the city at 9:00 a.m. and took the A6 highway in a northwesterly direction to Paris.

Both visits were the first time in 10 years. Just 10 years ago was my debut year of driving in Europe. I was deeply moved.

This time I would like to introduce Fontainebleau Castle. When we left Auxerre, it was cloudy, but when we arrived at Fontainebleau, it was fine. We were really blessed with fine weather this time.

Ten years ago, I had a hard time finding a parking space, but I remembered that I could park there because the street parking space at the main entrance of the castle was open. However, the front of the castle is now closed to parking, and instead there is a large public parking lot on the left side of the palace, so we had to park there.

First of all, you have to go through the fence in front of the castle to enter the grounds, and on the right side of the main entrance is the entrance to Fontainebleau Castle. You can buy a ticket here. This is the exit. It is better to go to the right side after entering the castle. 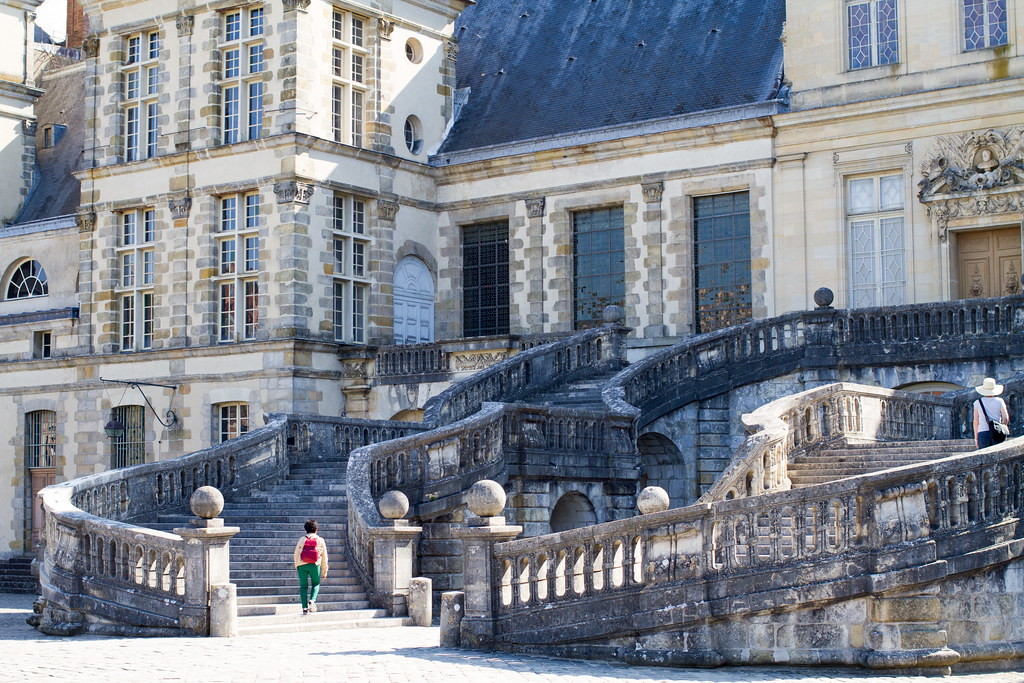 A brief description of Fontainebleau Castle

I will explain about Fontainebleau Castle according to the brochure. When you buy a ticket, you get a pamphlet like this one. This is the French pamphlet that I got for my study, but there was also a Japanese pamphlet. As expected of a city, it is a world heritage site.

According to the brochure, the interior of Fontainebleau Castle is divided into three main sections. From the following, I will show you the pictures in both French and Japanese. The pictures are subtly different.

You can think that the colored area is the place to visit. I think it’s not as big as Versailles, but it’s quite a big palace.

On the left page of the tri-fold brochure, there was a description of how the Fontainebleau Castle developed.

Fontainebleau Castle was first built in 1137 as a fortress on the site. Some 400 years later, under the reign of François I, it was extensively renovated in the Renaissance style.

Incidentally, François I is an indispensable figure in the art and culture of France. Many of the castles in the Loire region that we visited in the first half of this trip were built during his reign.

From the Valois to the Bourbon dynasties, the building was enlarged again during the reign of Henri IV. It was during this period that the original buildings we can see today were completed.

It seems to have been continuously enlarged before the French Revolution, during the reign of Louis XV century. This is the building at the entrance to the Napoleon I Museum. What you can see today is a building that was renovated by this time.

After the Revolution, the walls were torn down, but Napoleon I was able to reclaim the castle. The interior of the castle was extensively renovated by Napoleon III.

Now, let’s take a tour of the city. I’ll show you around the places where I have photos and where I could find.

The museum of Napoleon I is located in the building where we bought our tickets, so we started our tour from there. 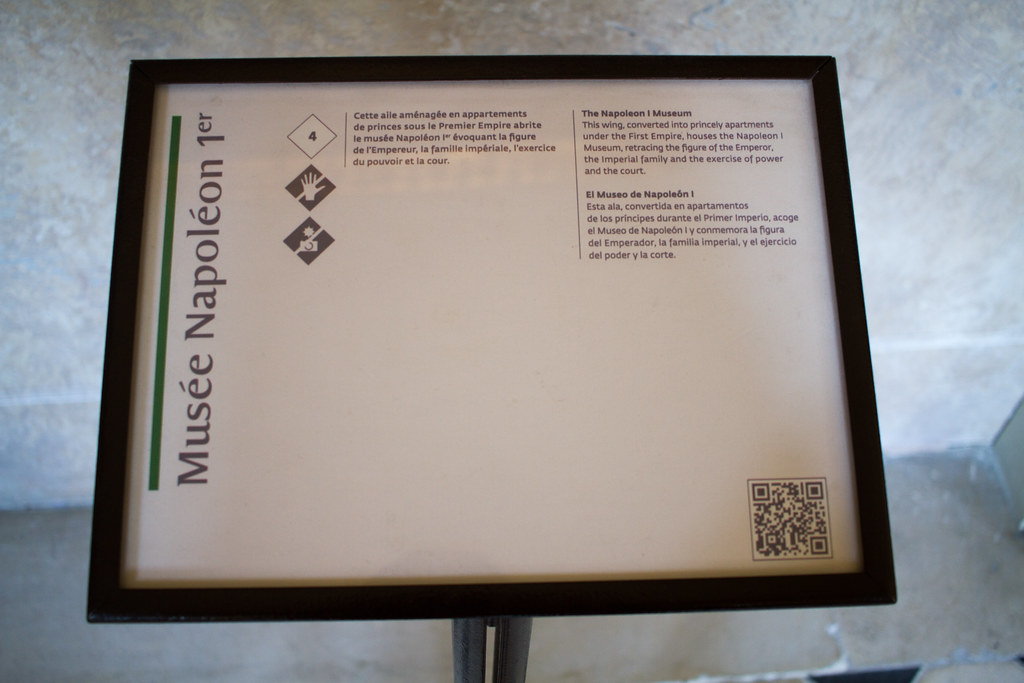 It is said that Napoleon collected in this palace the treasures and furniture that are said to have belonged to the kings of each country that he occupied in Europe. Some of them were displayed. 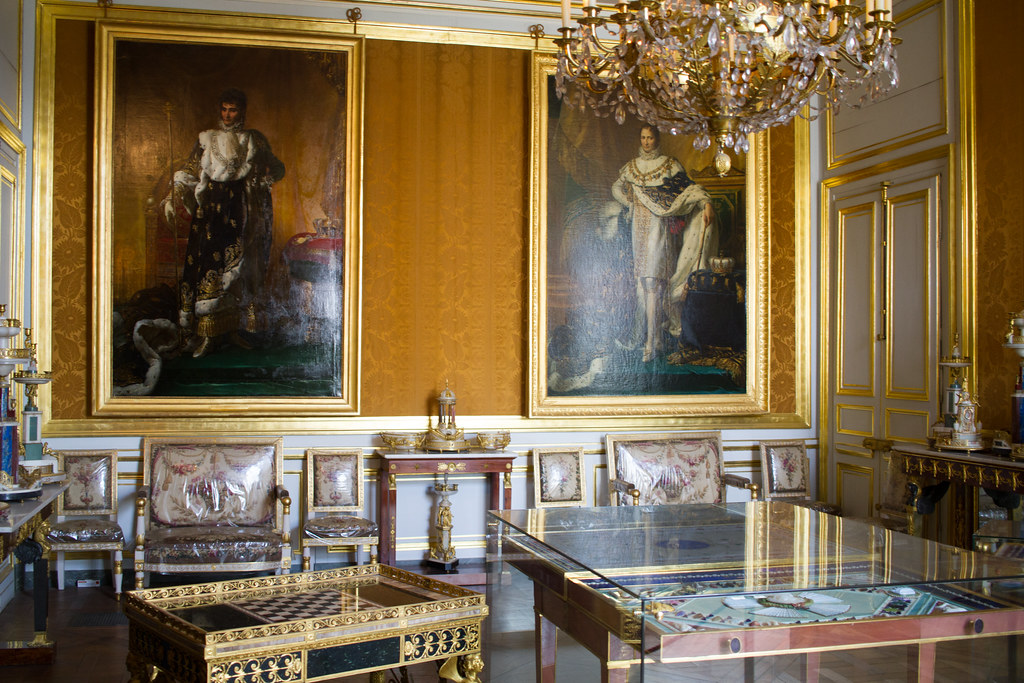 After seeing the whole right wing of the castle, we went to the area on the right side of the front. In this area, the building number 12 is around the Pope’s residence (L’appartement du Pape). 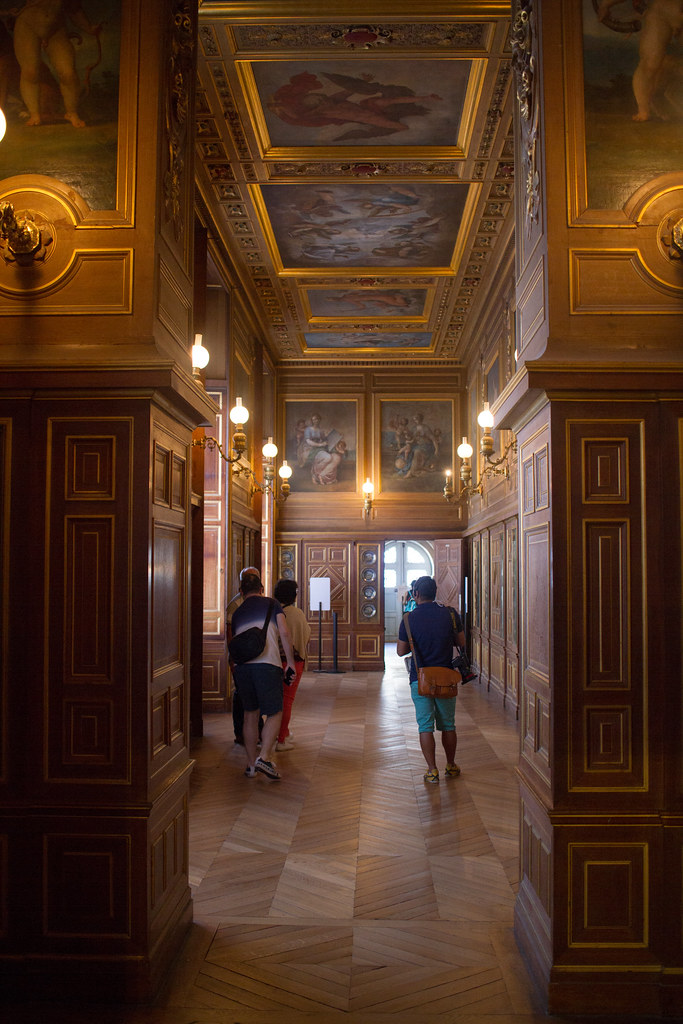 If you go further, you will see the golden cloister, the cloister of François I. The beauty of the cloister attracted my attention, but I felt it was not so overly gorgeous as Versailles. 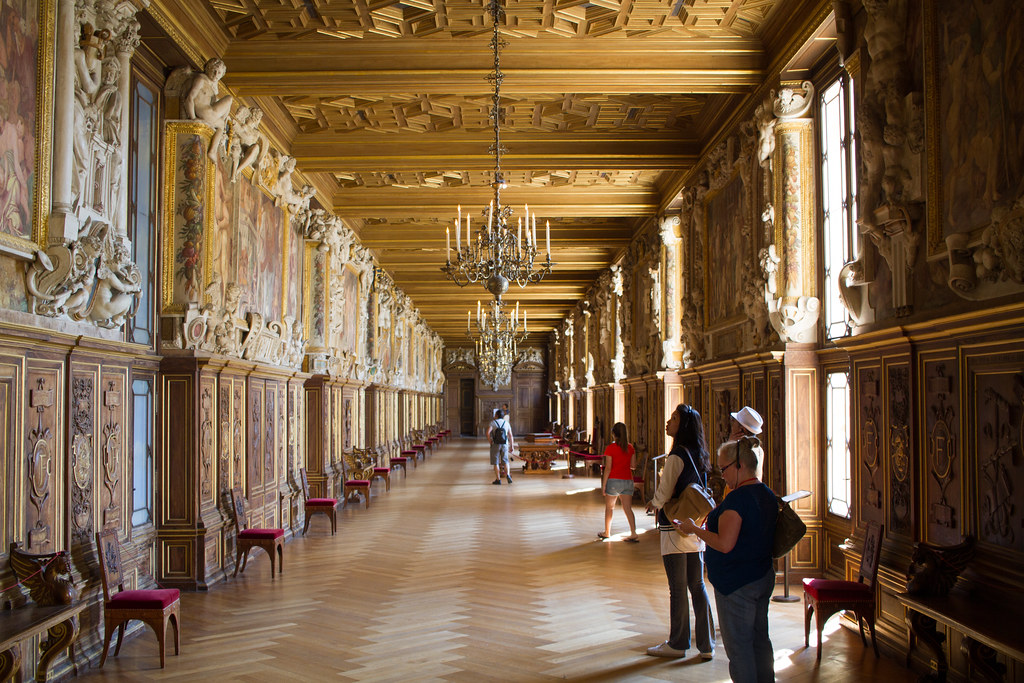 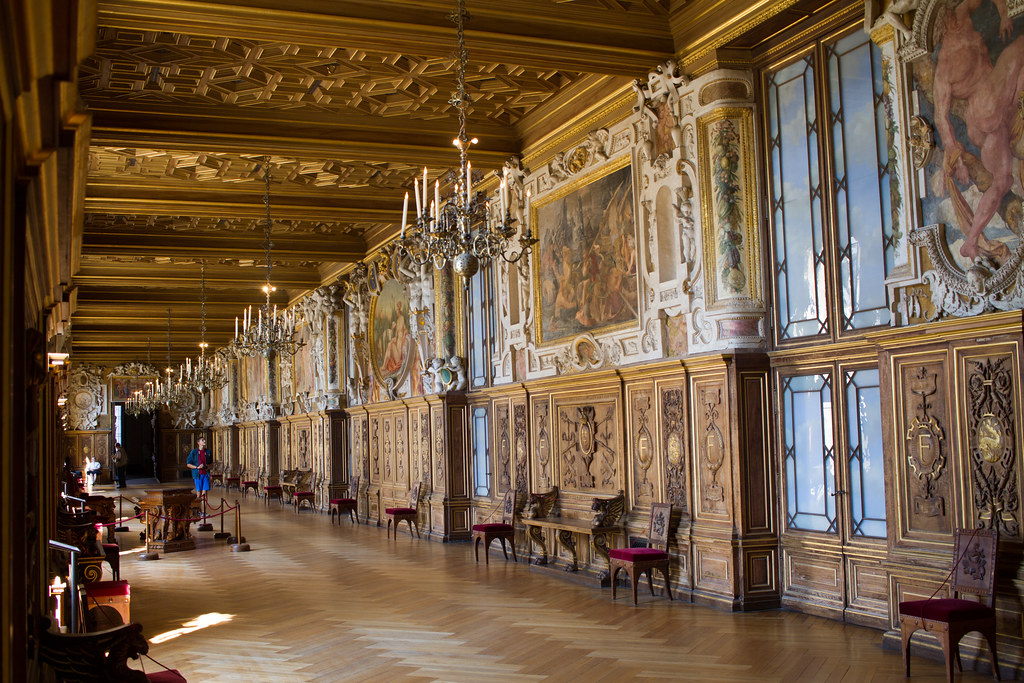 Behind it is the ballroom. It is also very beautiful. It was also built during the reign of François I. 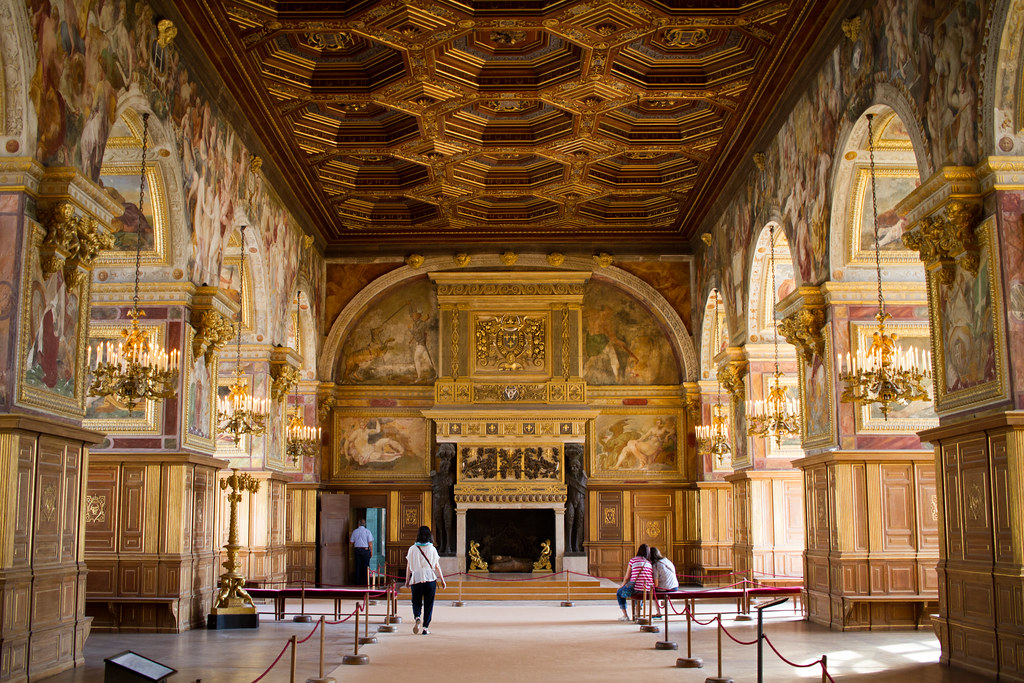 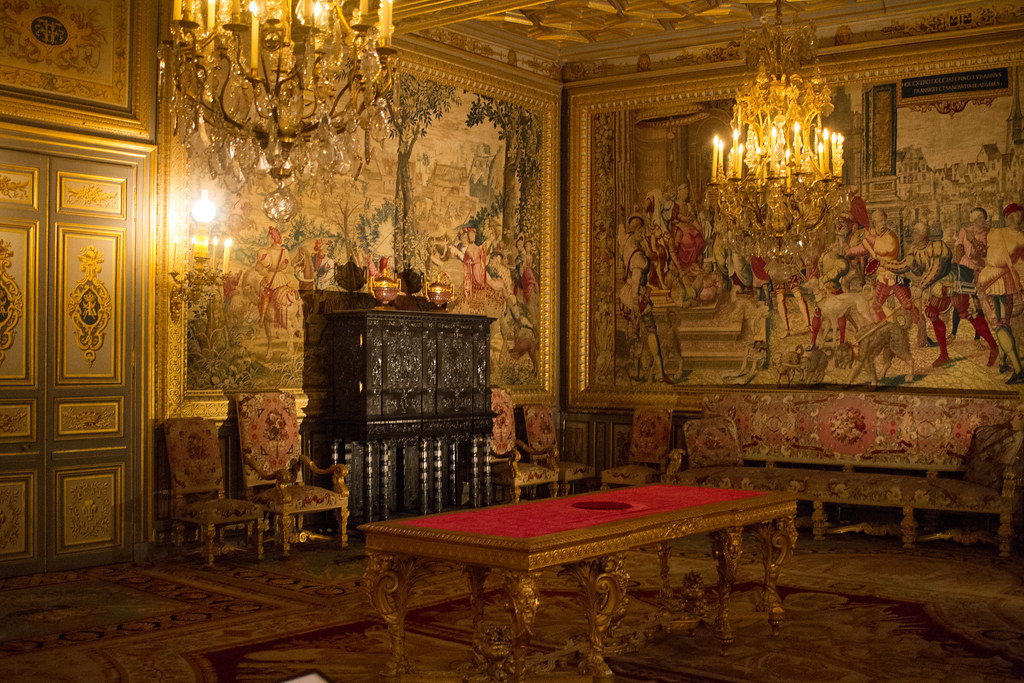 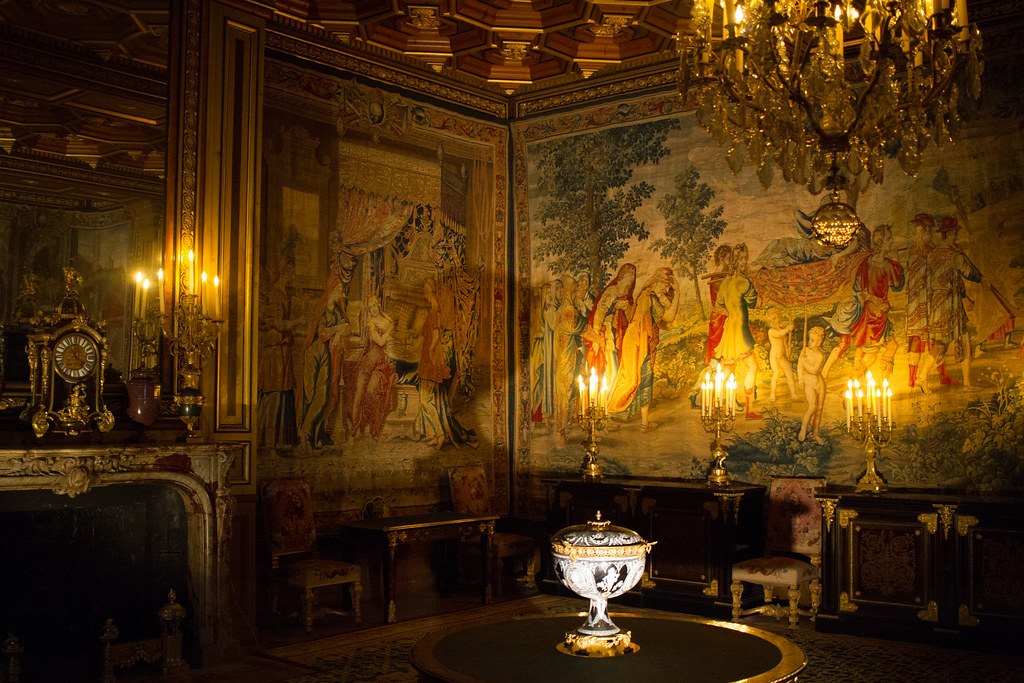 Is this a library? I thought it was a library, but it seems to be « Les galeries de Diane et des Cerfs » (The Diane and Stag Cloisters). We couldn’t go into the back of it. 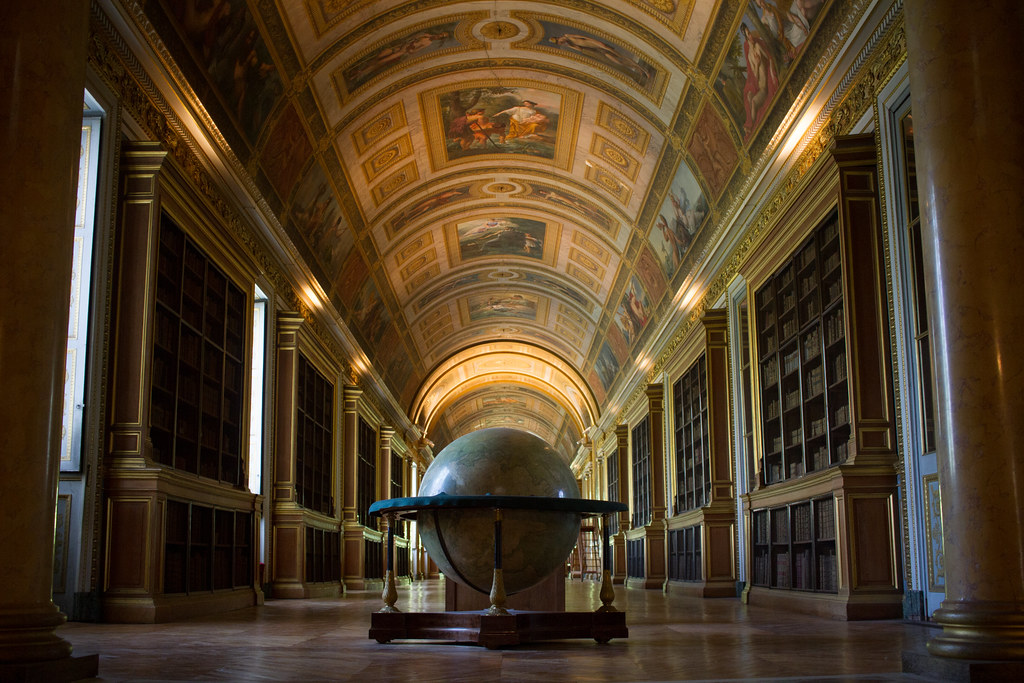 The final viewing was the route to the Gros Pavillon.

First is the Empress’s bedroom. It was very gorgeous and worth seeing. The decoration after the Bourbon dynasty is really gorgeous. I wonder if it was the period when the most gorgeous decoration was done in the world. 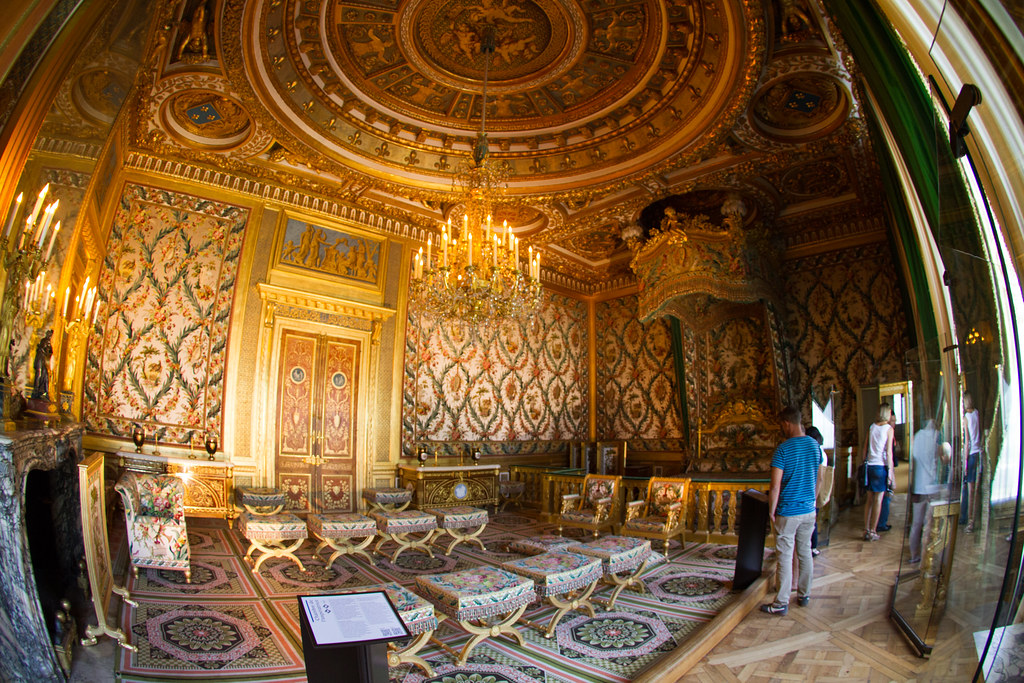 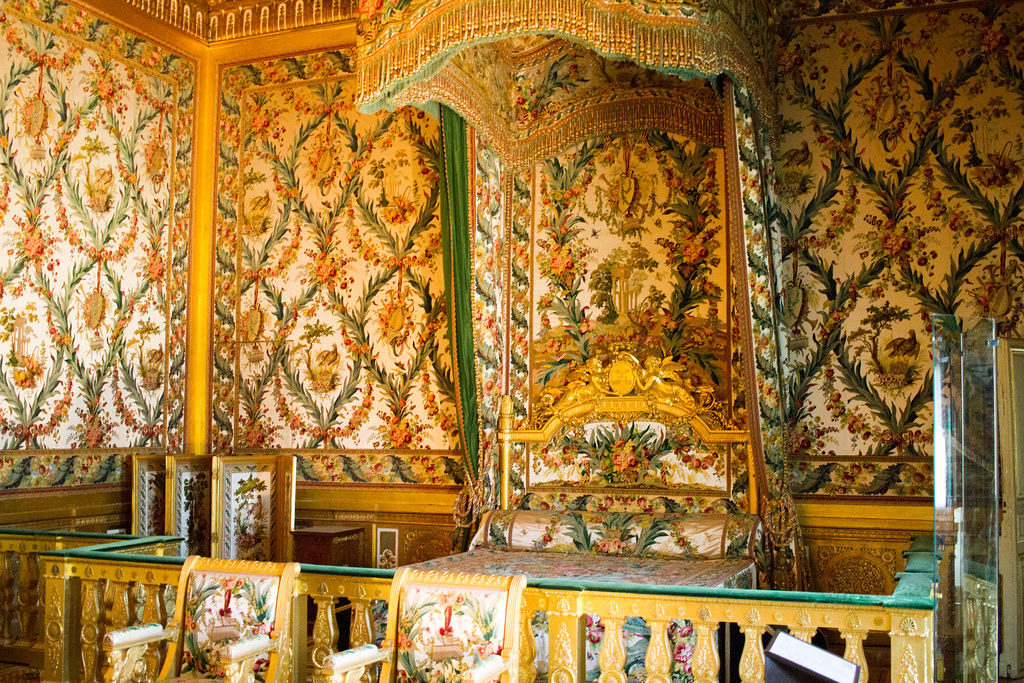 This is the King’s Chamber. 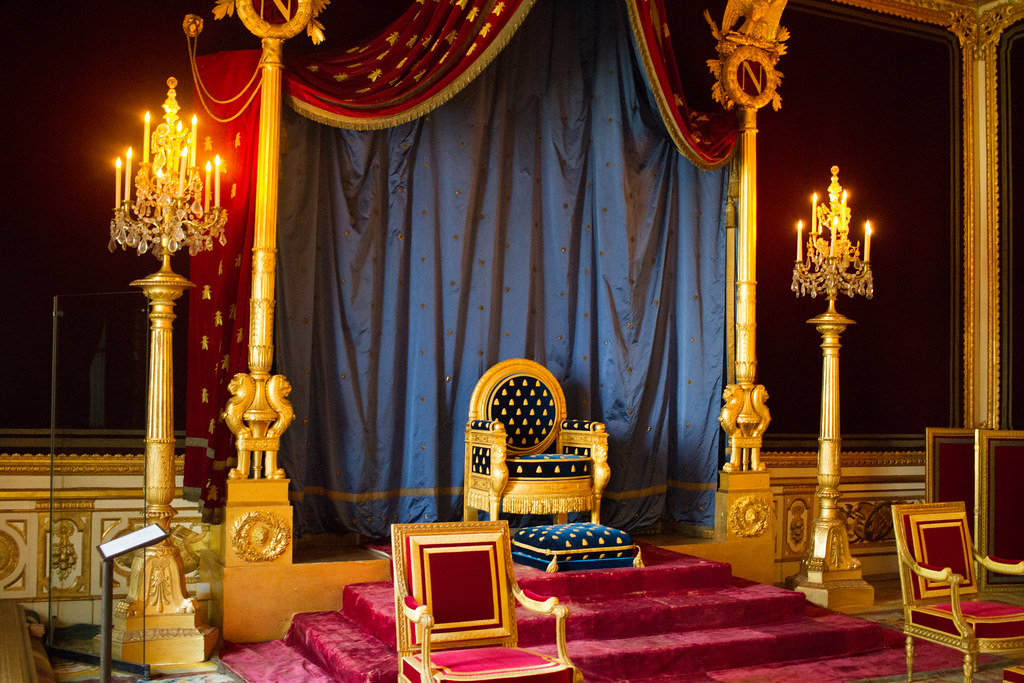 The emperor’s bedroom is here, next to the empress’s, I think. It is smaller than the Empress’s, probably because of the tradition that the kings of France basically slept in a sitting position. 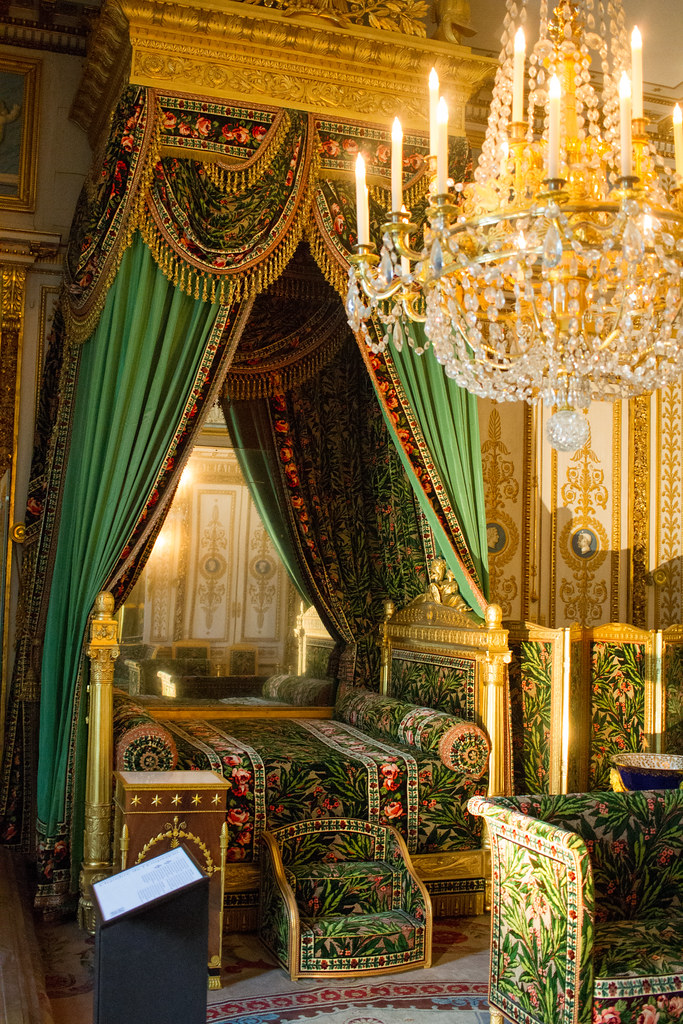 There are so many things to see and do in this area that there were many more rooms and salons than the ones I mentioned above.

The last chapel we were shown was this one, called the Chapel of the Holy Trinity. It was used for the wedding of Louis XV here. 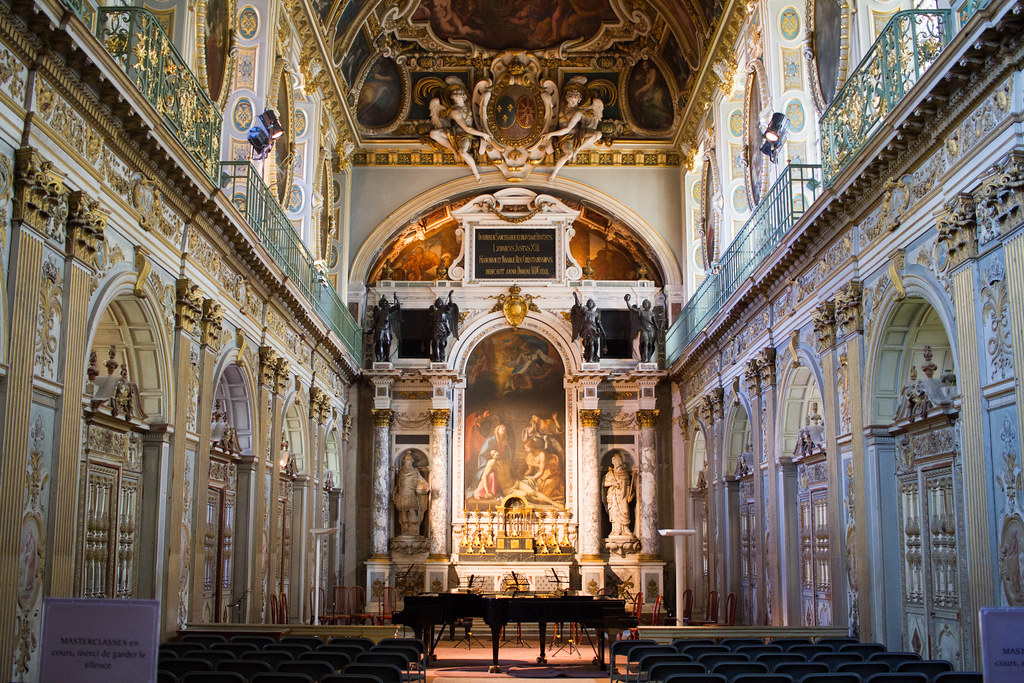 This was the end of my sightseeing tour in the castle. 10 years ago, I must have been there, but I didn’t remember much except for a few places, probably because I didn’t keep a record of it. This time, however, since it was my second visit and I recorded it on my blog, I feel that I can remember it clearly even if I visit there again.

Fast food in France, Part 2: Automation of ordering seems to be progressing

One of the best examples of fast food is the burger shop, and we've been there several times.But only twice, I think. Qu...

We visited 43 of France's most beautiful villages on this trip, the second largest number we've ever visited in one trip...

After leaving the St. Isaac's Cathedral, the example "theft" occurred. Immediately after that, we came here "Petropavlov...