On the second day of arrival, the 27th, the first day as a sightseeing day, the last sightseeing was a town called Caprarola in Lazio. This place has been chosen as the most beautiful village in Italy. It is not so far from Rome, 50km, but I am not sure how much public transportation is available. Of course I visited by car.

The city is home to the Palazzo Farnese, a characteristic pentagonal palace built by Pope Paulus III (real name: Alessandro Farnese), known for convening the Council of the Trient in the late Renaissance, when he was a cardinal.

It was a very nice day for sightseeing. Just before we came here, we were in Civita, which was also chosen as one of the most beautiful villages in Italy. I think it was less than an hour away from Civita.

The town is on a hill, and at the top of the hill is Palazzo Farnese. From the entrance of the village to the Palazzo, there is a long uphill single road with many cars parked on the street. This road was set by the investment plan at the time when the Palazzo was built.

We climbed up the hill to the inside of the palazzo. The pentagon was a popular architectural style for fortresses in this period, but this building was not a fortress but a palace or a residence. In those days, the pentagon shape was also a way to show off power.

After the death of Paulus III, the palace was rebuilt in 1559 by the architect Vignola at the request of his grandson, Alessandro Farnese of the same name. The Farnese family died out in 1731, and the palace was taken over by the Bourbon family, but it is now managed by the Italian government. Today it is open to the public as a museum. 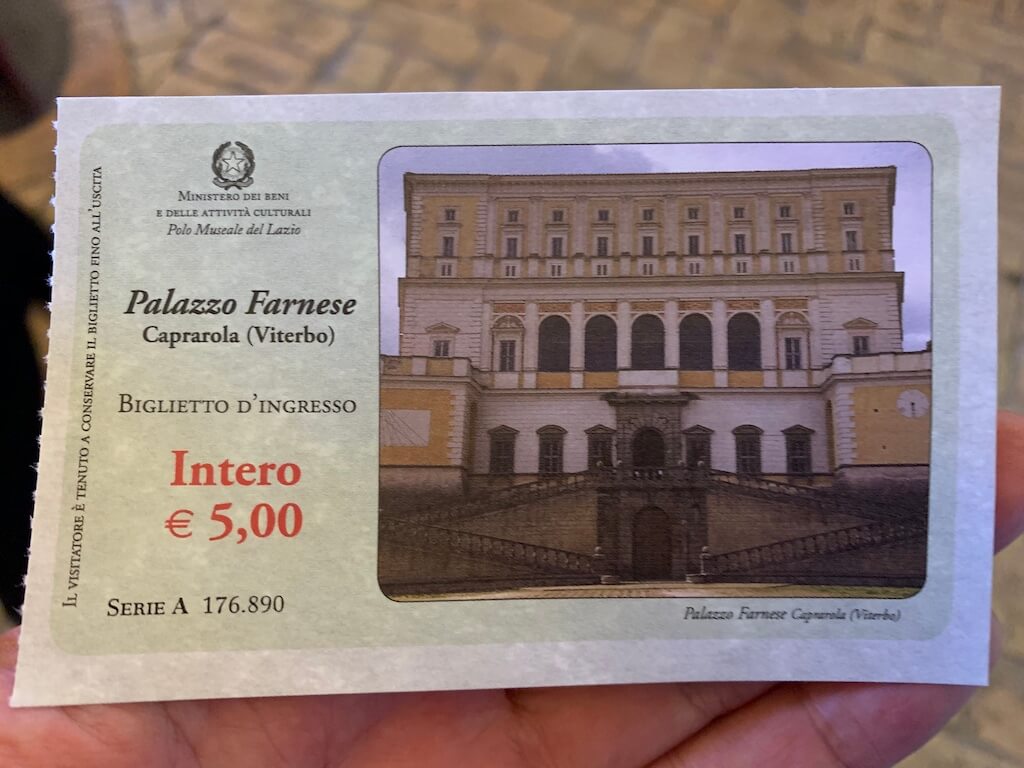 The interior decoration was done manually by Alessandro Farnese, grandson of the aforementioned Pope, and by the leading architects and artists of the time. In terms of period, it is the late Renaissance. As expected of a house that has discharged a pope, it was extremely gorgeous and opulent.

There were so many rooms.

The building has three floors, and the most impressive part is the decoration of the spiral staircase leading up to the upper floors.

It is probably because it was the home of the Pope that it somewhat resembles the Vatican, such as the map room. It was as if we were visiting the Vatican.

The view of the village from the terrace and the hill where the palazzo is located was also very beautiful.

By the way, there was a parking space there at the back of the palace. However, I wasn’t sure if there was parking up there, so I decided to park at the bottom of the single track hill leading up to the palace and then try my best to climb the hill to the palazzo. It might have been a good idea to climb up here once. Just a reference for future visits.

The most beautiful village, with the palaces of the famous families of the papal emissions, was a wonderful place to see and well worth a visit.

Date of visit: May 15, 2012, around midnightWe entered Castilla y León from La Rioja under the clearest skies of the tri...

It's a humble and painstaking task, but this year I created a list of the most beautiful villages in France that I plan ...

The parking situation in Italy = ease of parking is not very good compared to the rest of Europe. I thought it was espec...

Car rental, this time in Paris and Barcelona Sants station -2012 France and Spain