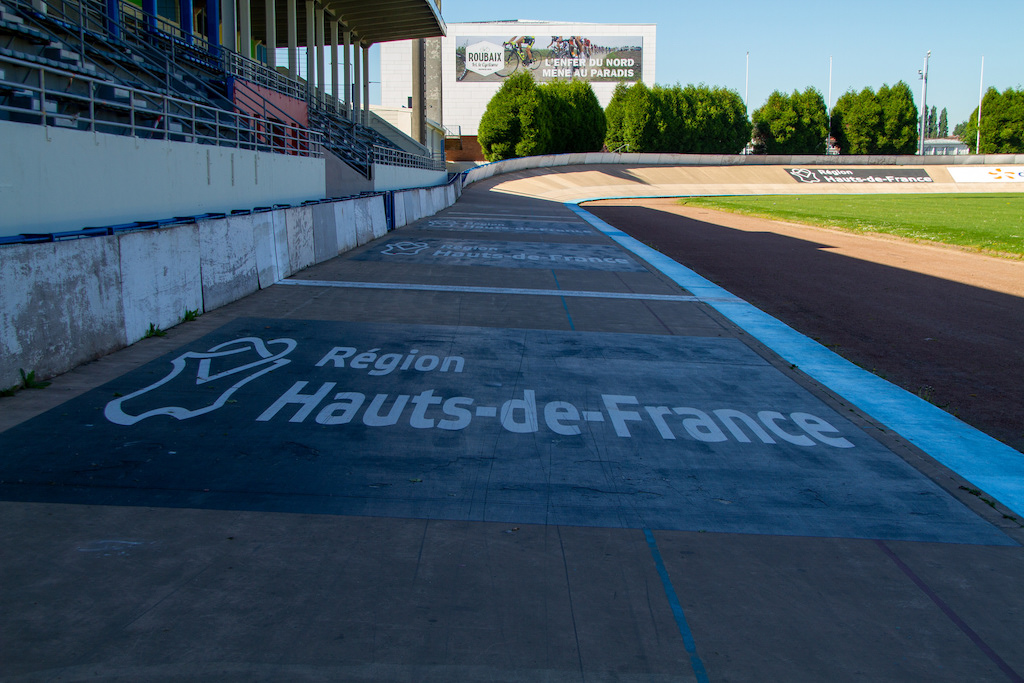 I thought I had finished writing the May 2018 France Excursion Record series, but I forgot to record my visit here.

I haven’t ridden a bicycle road for a long time recently, but even now I often watch the three major road races and some of the bicycle races called classics. This time (in May 2018), our trip was in Northern France. When you think of Northern France and cycling, many cycling fans will think of the Paris-Roubaix every April. This year, Peter Sagan won the race for the first time, and it was a particularly hot topic.

The Paris-Roubaix bicycle race is a one-day race that runs from Paris (technically not in Paris, but in Compiègne in 2018) to Roubaix, a distance of about 260km. What makes it unique is that there are a total of 27 cobblestone roads called « pavé » set up. The cobblestone roads used in this race are not as neat and clean as those in cities, and each stone is large and not well maintained. In such a situation, professional racers run through. By the way, this kind of road race is known to be held often in Belgium. Last year in 2017, I went on a tour of the most beautiful villages in Wallonia and saw pavé that sometimes looks like it is used in classic bicycle races.

Velodrome at the finish line, Roubaix

The main purpose of my visit to the Nord region that year was to visit the Louvre annex in Reims, which I have mentioned in this series. The center of this region is the city of Lille. I almost always pass through the suburbs of Lille on my travel route. Reims and Roubaix are near Lille. Especially Roubaix is a neighboring town. That’s why I decided to visit there this time.

I knew I had to go to the impressive finish line, the Velodrome, which was easy to find on Google Maps. The day before my visit, I stayed in Ostend, Belgium, and it took about 1 hour and 30 minutes to get to Roubaix. We arrived at 10:00 in the morning. It was a normal day with no particular competitions, so we were able to park on the street without difficulty around the Velodrome. Free.

Because I did not do anything other than examine the place at all, there is no information at all, and I do not understand whether it is possible to go inside at all. However, the site is open to the public and there is no security guard at the entrance. I was able to enter easily. The gymnasium is on the right immediately after entering the site, and it seems to be a place like the general facility of sports.

A little further on, I saw a stadium that I had seen before. It looked like it was open and you could go in and out as usual, but should I go in or…? When I was watching for a while, a man who was running ran into the stadium without hesitation. Was it someone related? Just as I was thinking, another running man also went inside. It seemed okay, so I went in too. There was no room at all. 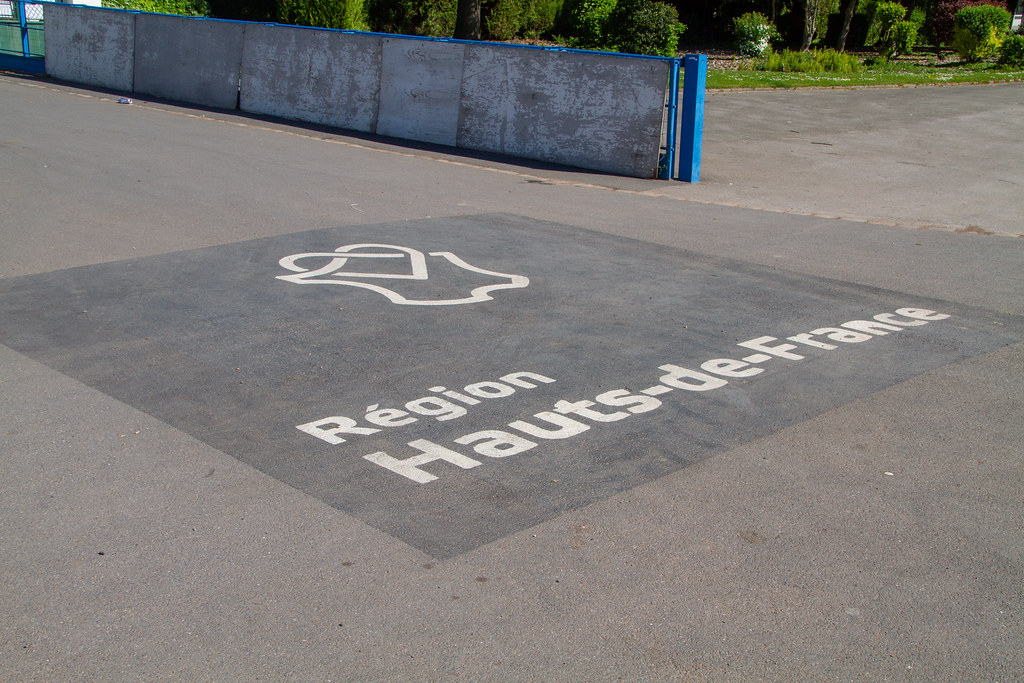 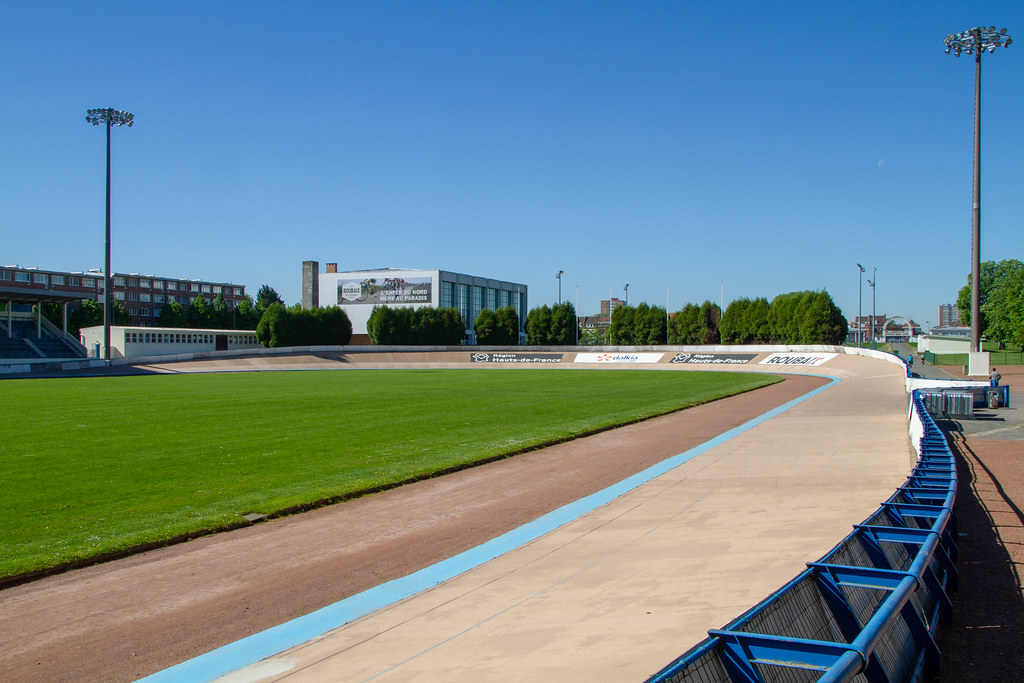 The scene inside was exactly what I’ve seen on TV. However, it seemed to be more beautiful and solid in reality. Yes, it was old and not glamorous, but I had the impression that it was quite shabby from the image I saw on the video. The main stand, however, was not as clean as it should be. 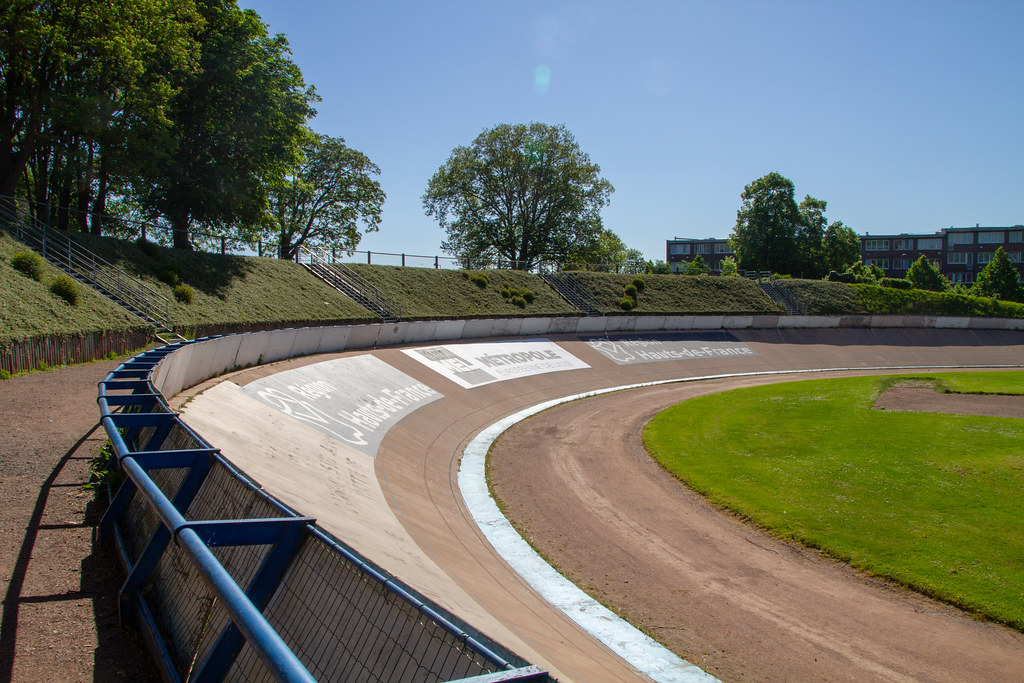 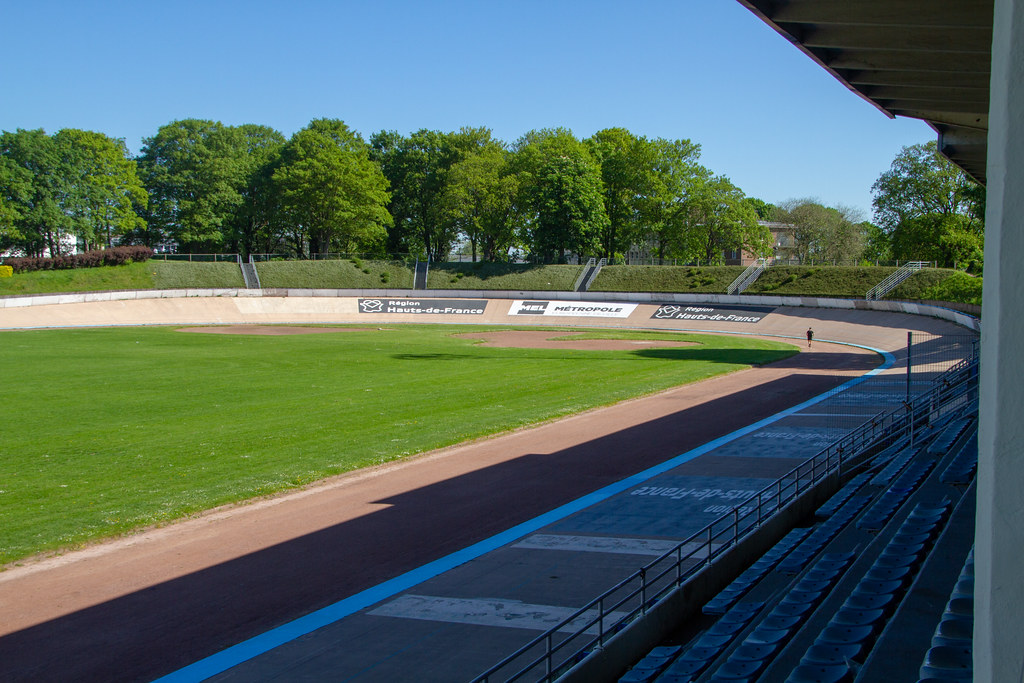 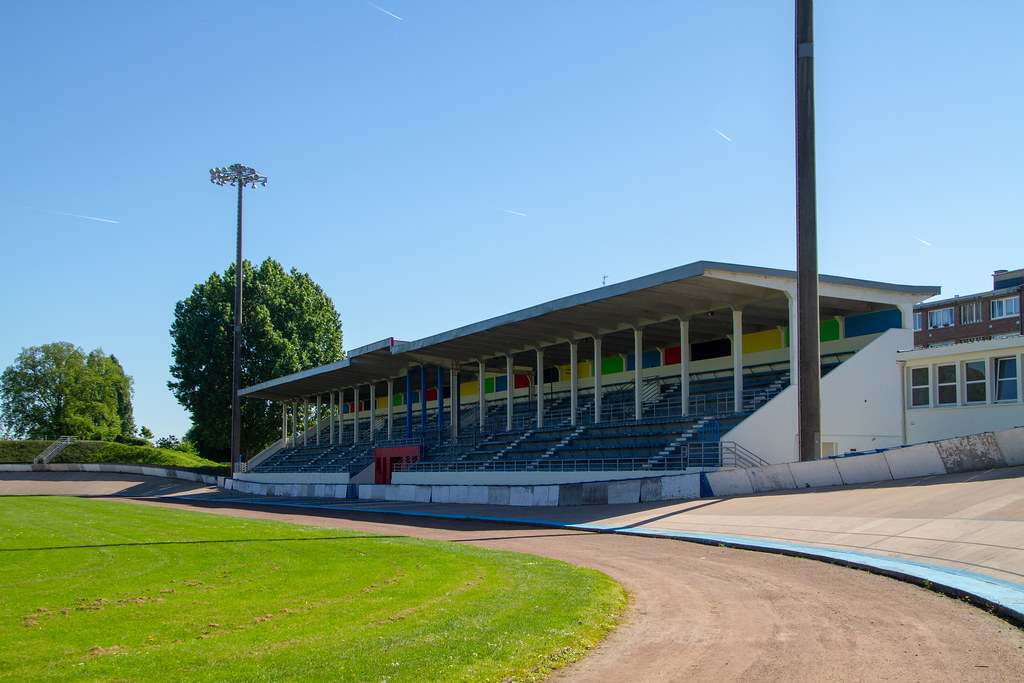 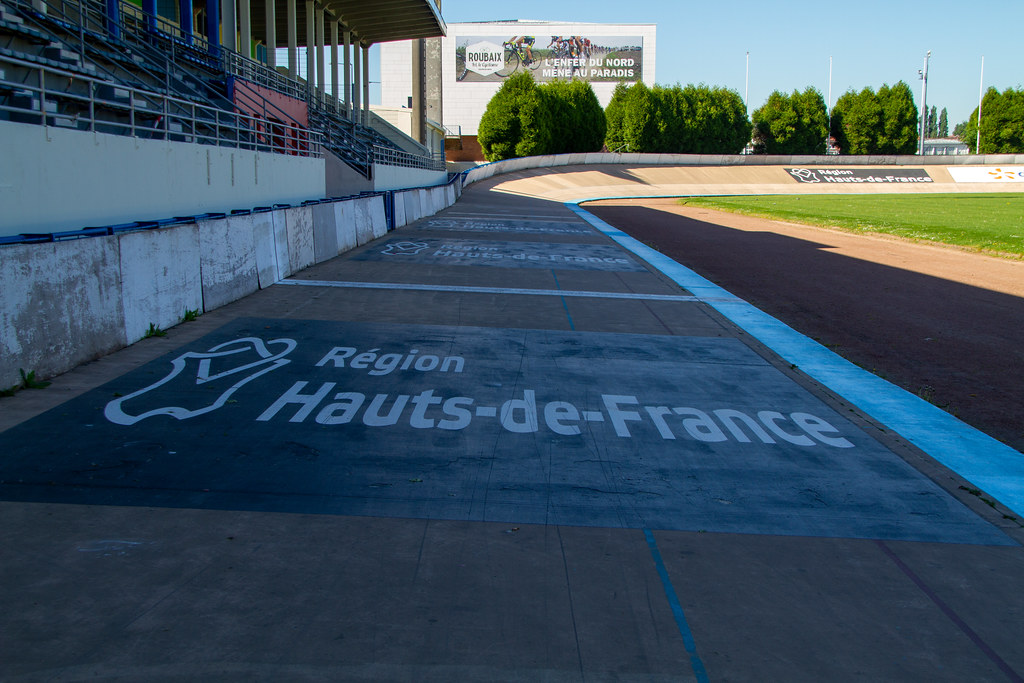 I thought I would go around the course like this, but as you can see from the picture, it was a fine day with no clouds. The sunshine was strong and it was getting hot, so we cut off the tour halfway.

On my way home, I found what looked like a shop at the entrance of the stadium. They were selling Paris-Roubaix related goods and uniforms of the local cycling team. I bought some cycling goods as a memorial. 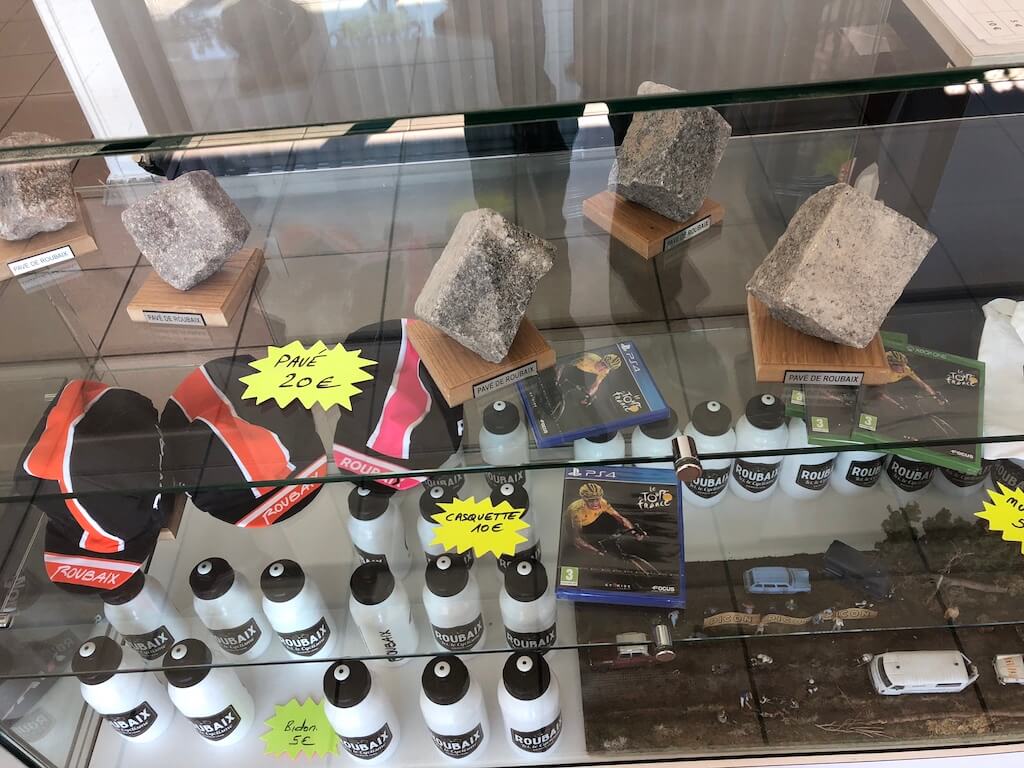 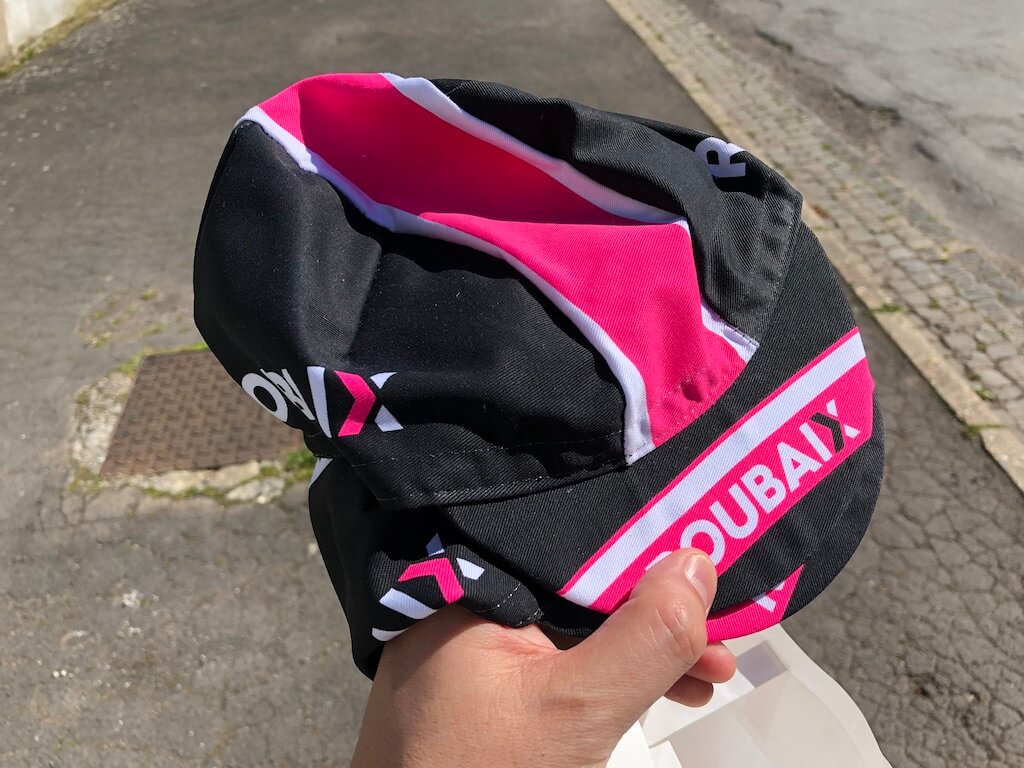 Then we went to Alambert, the most famous of the Pavé sector, which is said to be the specialty of Paris-Roubaix, about 30 km away from Roubaix. We first arrived at the exit side, so we went around the area and moved to the entrance side. 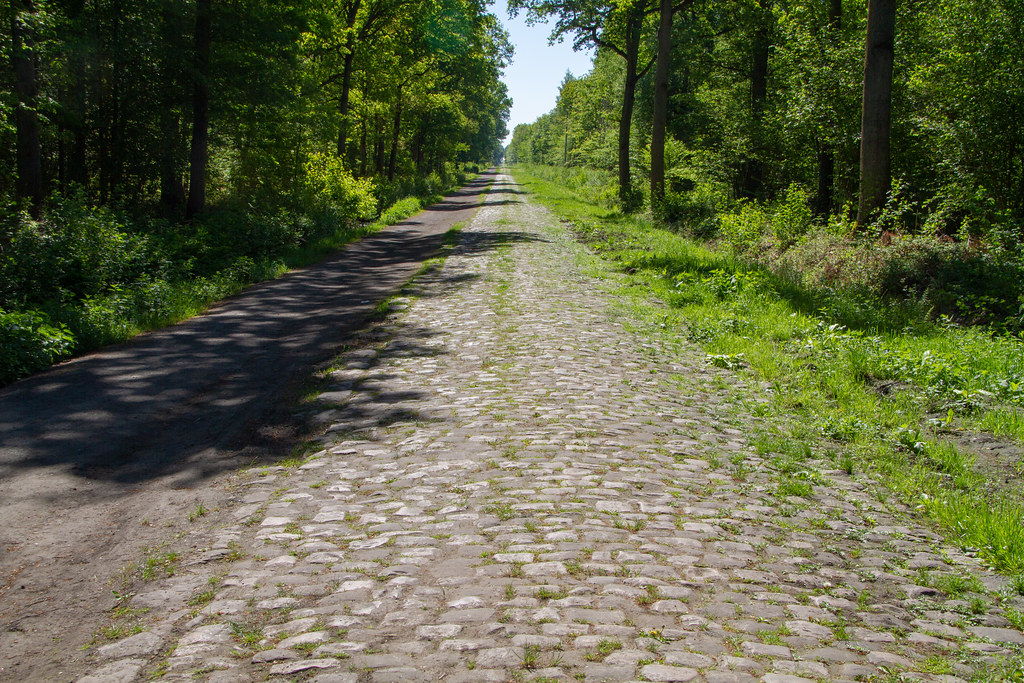 The pavé was located by the local railway crossing. As it is famous for the race, there was a space to park a car at the entrance and an information board explaining the race. It seems to be often visited by tourists. 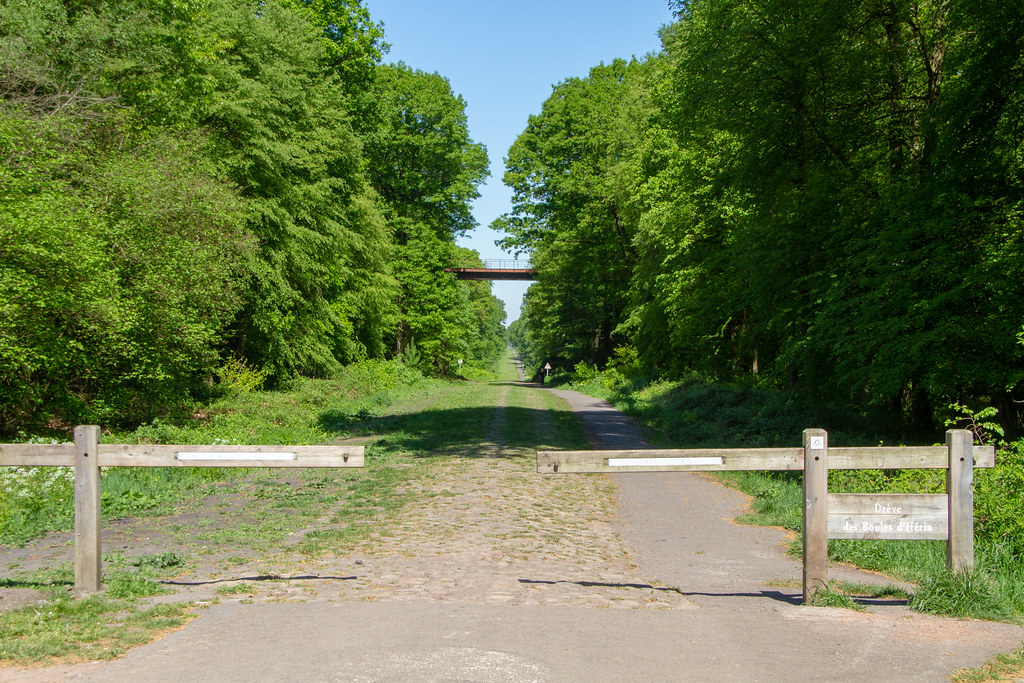 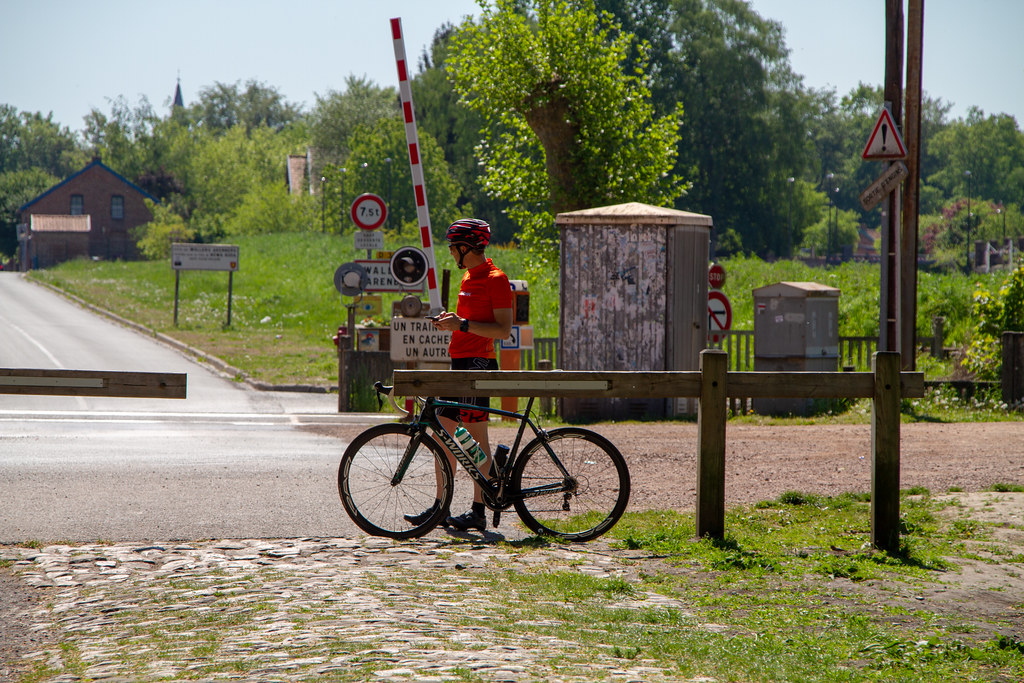 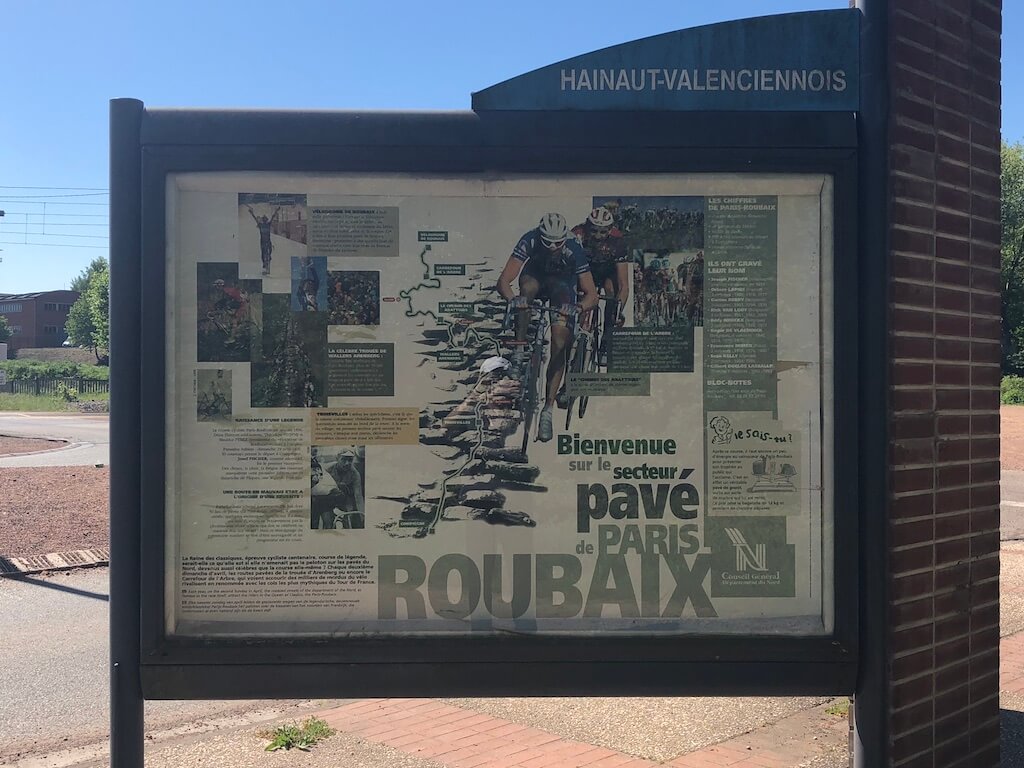 The actual pavé I saw had large stone blocks and gaps, and I was amazed at how you could drive a road racer through such a place. However, the width of the road was much wider than I expected. However, I heard that the riders try to go to the edge of the road to avoid the rough road as much as possible… I can also understand why this pavé is called the Alambert of hell. 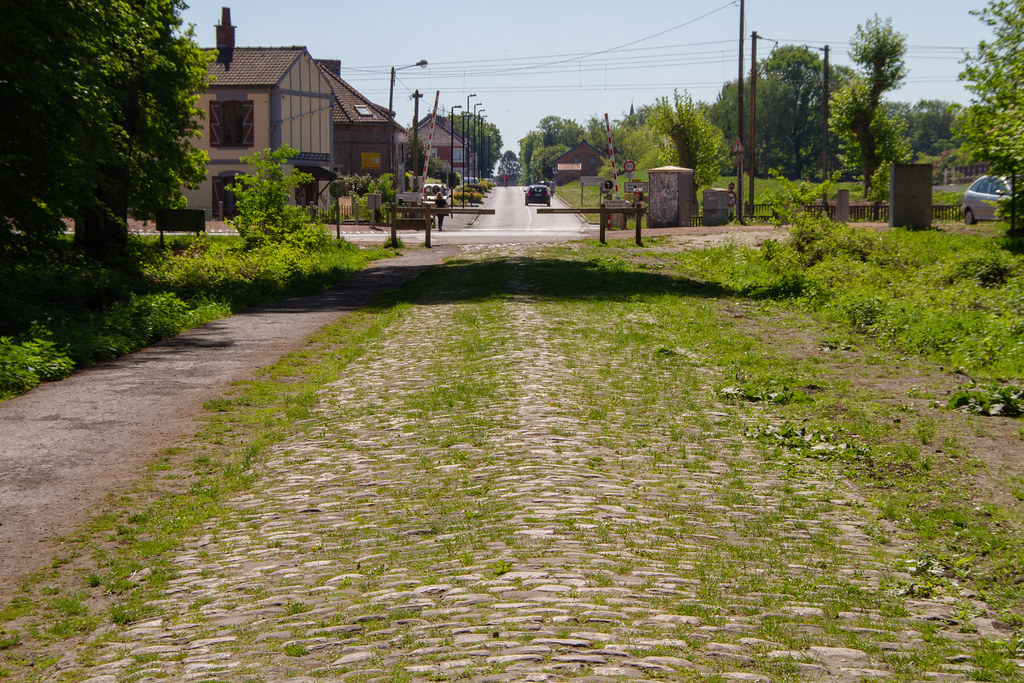 By the way, there is a monument like this at the entrance of the road. It was made in 2007 to show the awe of a man named Jean Stablinski. He was a Frenchman of Polish origin who was a racer in the 1950s and 1960s. He was also the overall winner of the Vuelta a España. 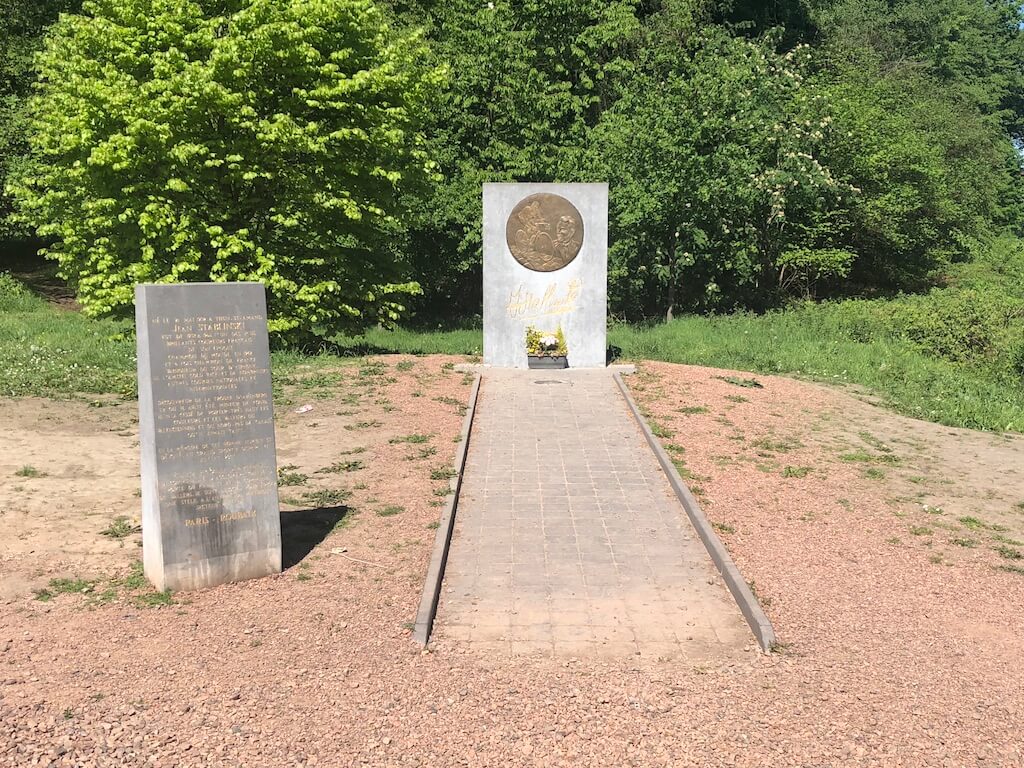 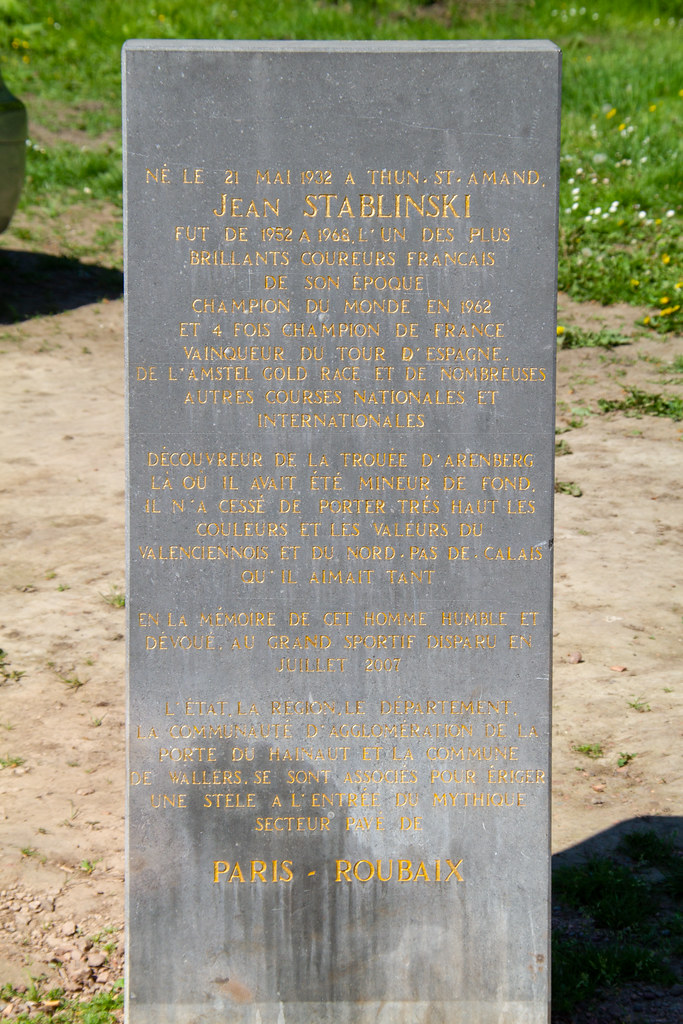 He is said to have been the one who discovered the Alambert pavé and requested that it be included in the course. In fact, he had been working as a coal miner in Alambert since he was 14 years old in order to earn a living for his family after losing his father. In fact, this area was one of the most prosperous coal mines in Europe at that time. I have already mentioned in the following post that the coal mining facilities in this area are a World Heritage Site.

The reason for the establishment of this monument is that he has contributed to the world of cycling even after his retirement, and has also contributed greatly to the province of Nord by making his hometown, Allambert, famous worldwide.

If you look closely at the photo, you can see a facility that looks like a former coal mine on the other side of the railroad crossing near Allanvale. 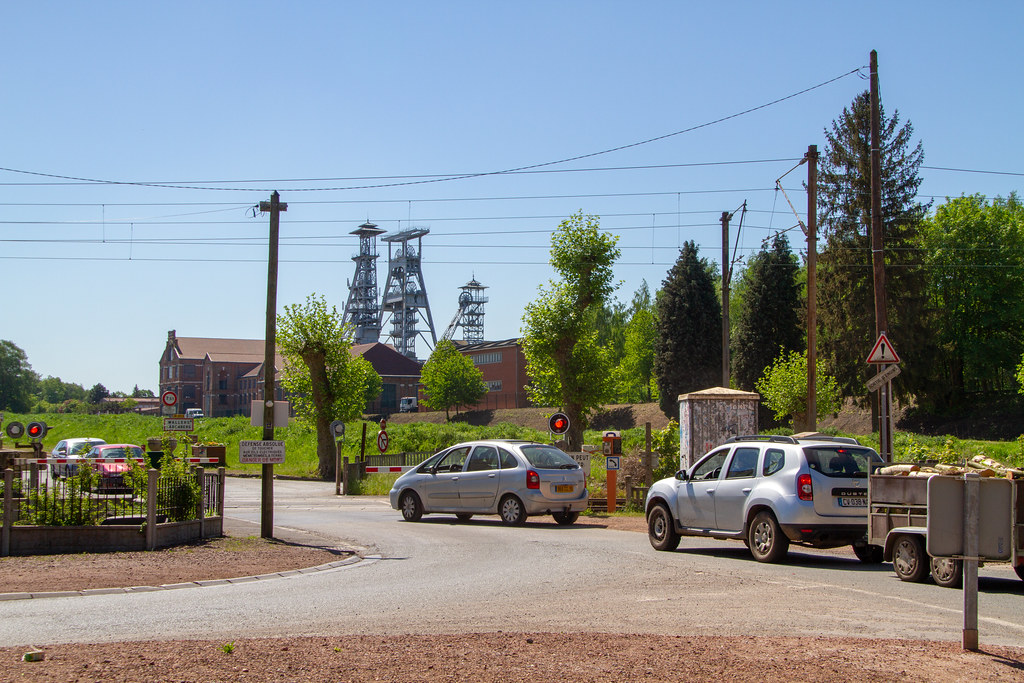 TwitterのフォロワーさんのオススメでこちらのSNSにはいってみました。Lang-8: first thing you need to do is to write your native language and the langu...