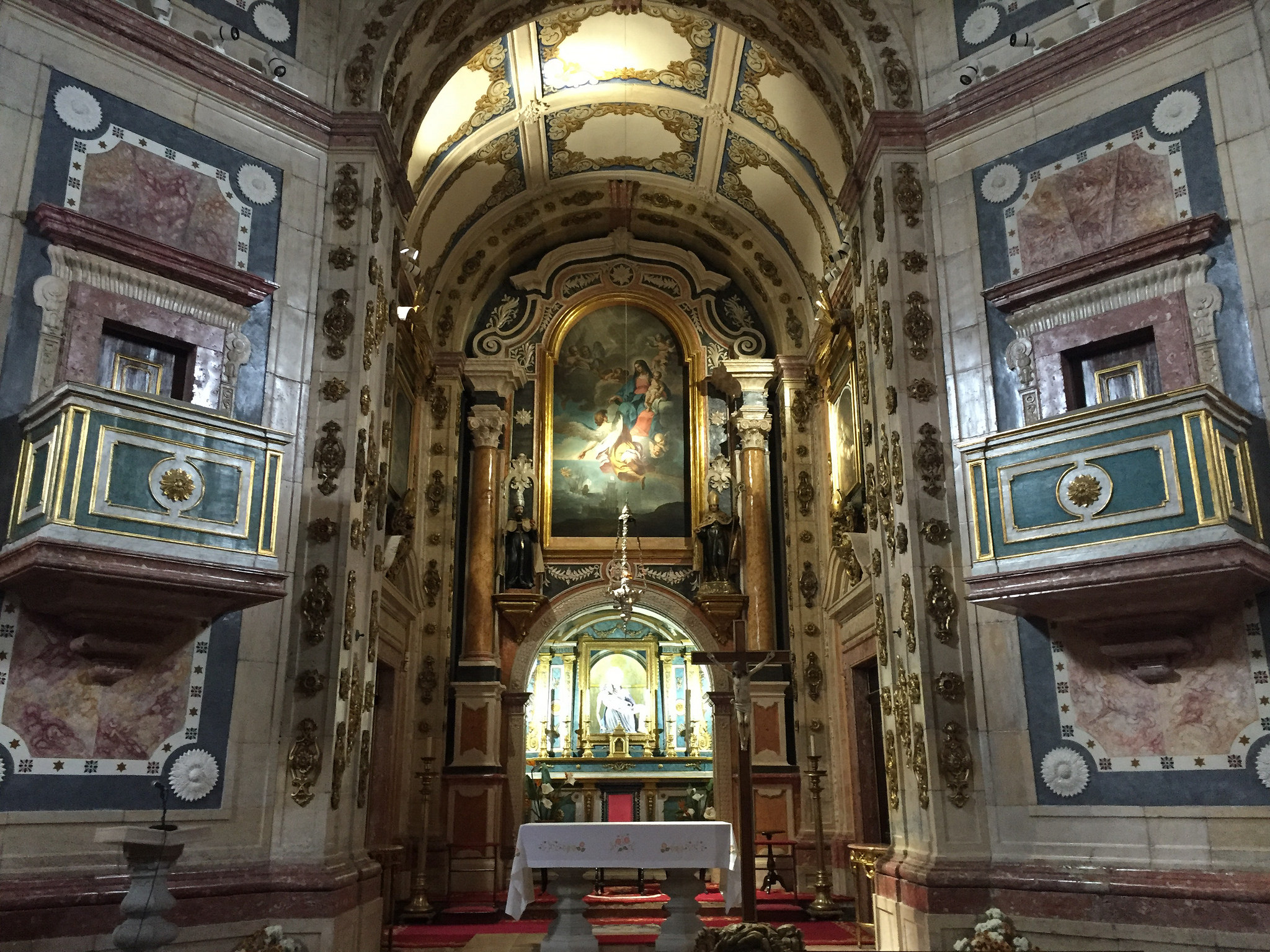 A hidden gem? This is an ancient city in the northeast of Lisbon that has actually been nominated to the list of World Heritage candidates.

I started my trip from the northern part of Portugal, and now I’m getting closer to the capital city, Lisbon. 28 days I’m going to stay in Lisbon. On the 28th, I was going to stay in Lisbon, because I was going to meet my wife there, so I booked a nice hotel in Lisbon in advance. But I still had some time to kill, so I took one more detour before going to Lisbon, and the last sightseeing spot on the 28th was a town called Santarém, about an hour east of Obidos.

At first glance, it is an ordinary town, and tourists are hardly seen.

The route to the city isn’t too difficult. There are many other big towns around here because it is close to the capital Lisbon, but Santarém is a town of a certain size, so it was easy to understand the signs.

And arrived in the city, it is a parking lot, but I was able to park on the street in the space near the gate, apparently just outside the old town. According to the map I got later at the tourist information center in the city, there seems to be several parking areas just outside the city walls surrounding the old town. I was able to discover a parking space immediately after arriving by chance, but even if it is not so, if I roam around the old town, I will be able to park without a problem. Because it is not a major sightseeing spot so much yet.

In addition, there was a marché near the parking lot I chose, which was decorated with Portuguese azulejos. 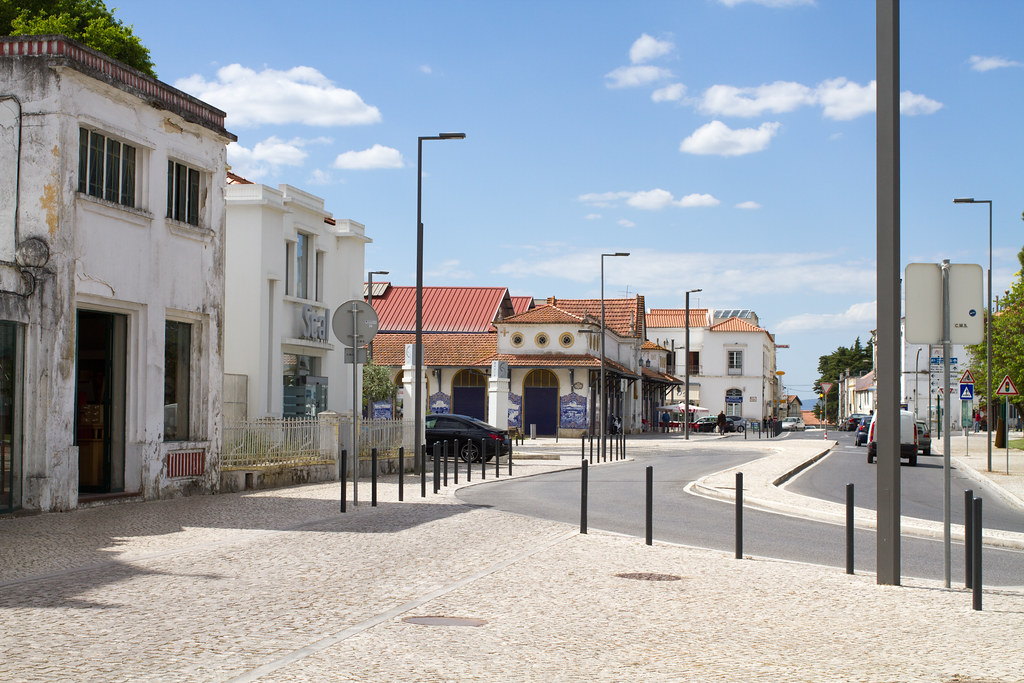 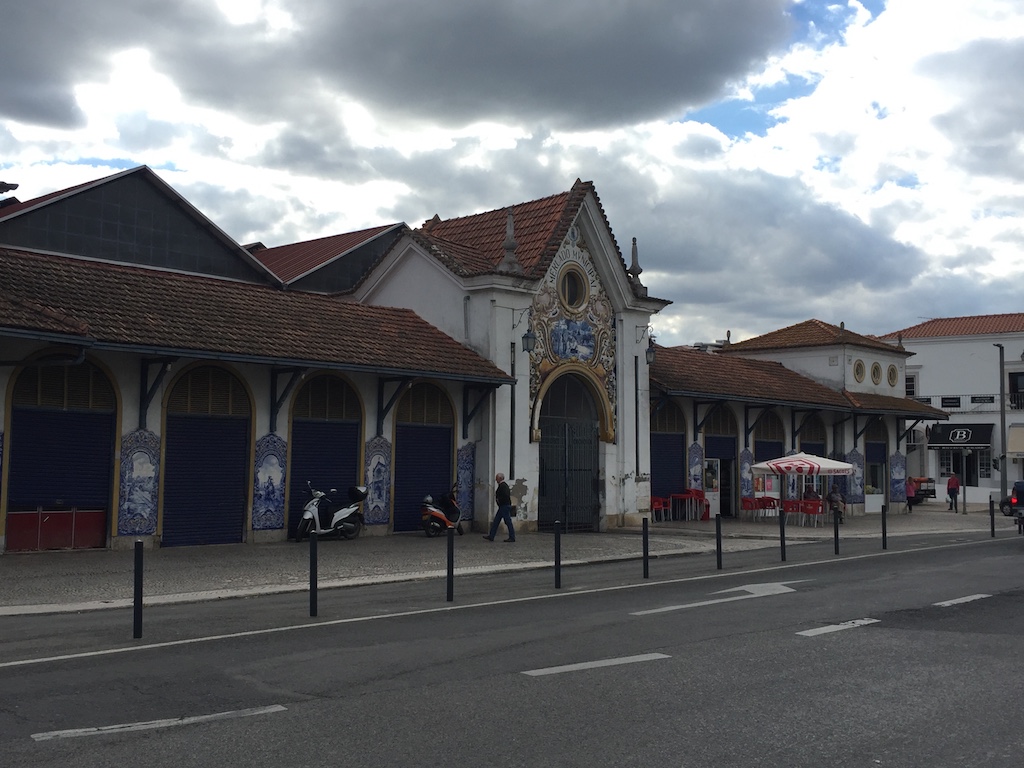 We finished parking safely and went to the old town. 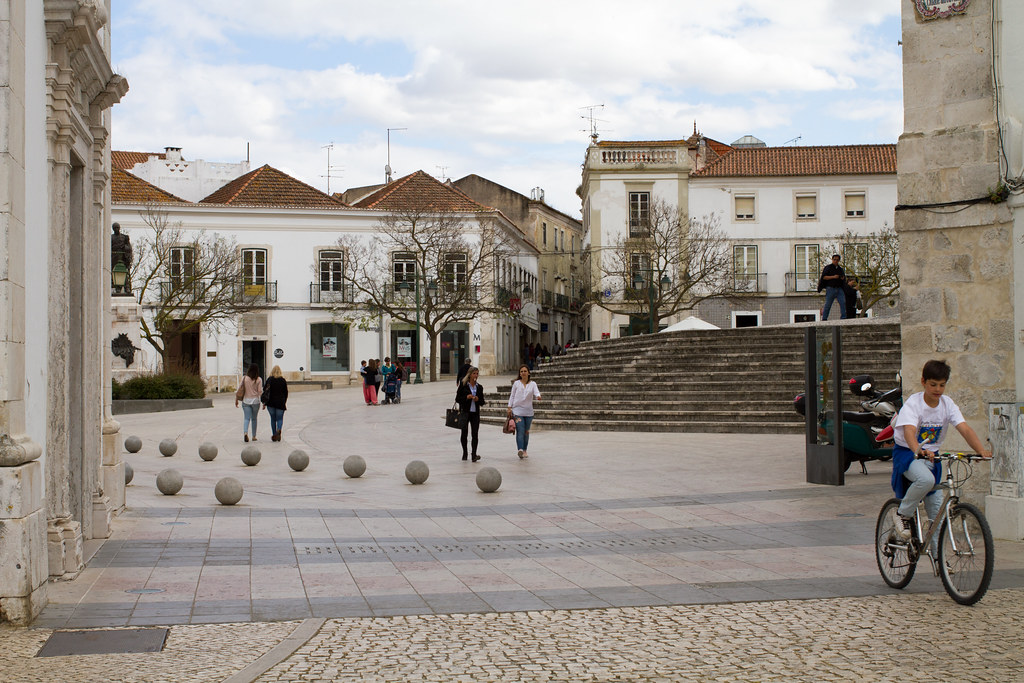 On the side where I parked my car, there are the Notre Dame da Piedade Church and the Cathedral, which I’ll introduce soon, but first I took a short walk to get a feel for the city as a whole.

Although the weather was cloudy, I didn’t feel that the town was so beautiful as a usual European town, although there were some Portuguese cobblestone streets. In addition, I didn’t see many people who seemed to be tourists, and I guessed that the people on the street were probably locals. 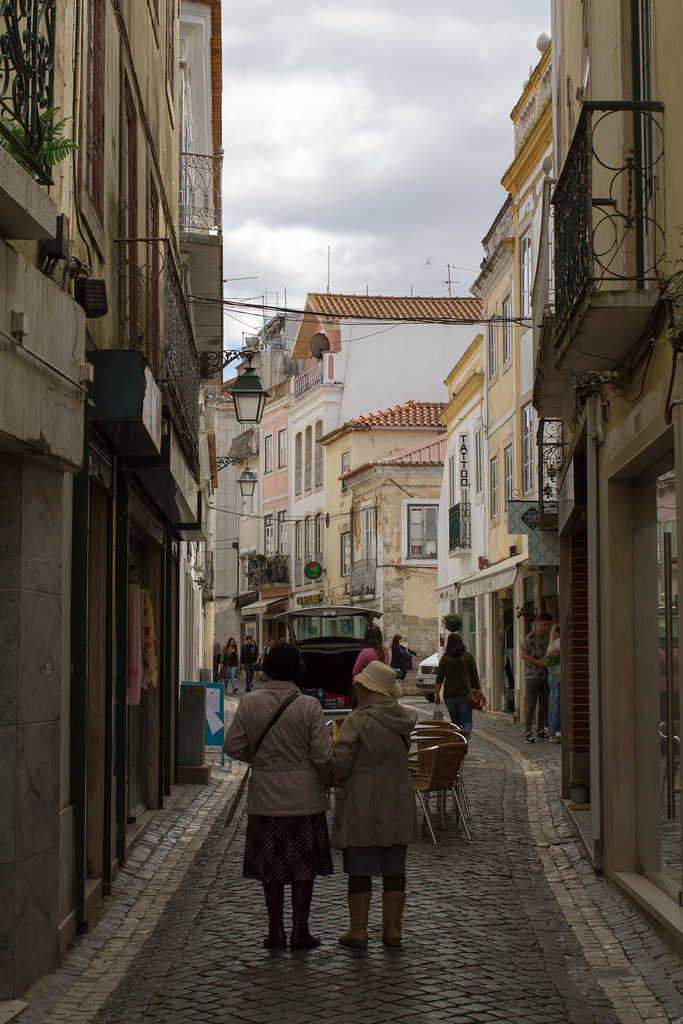 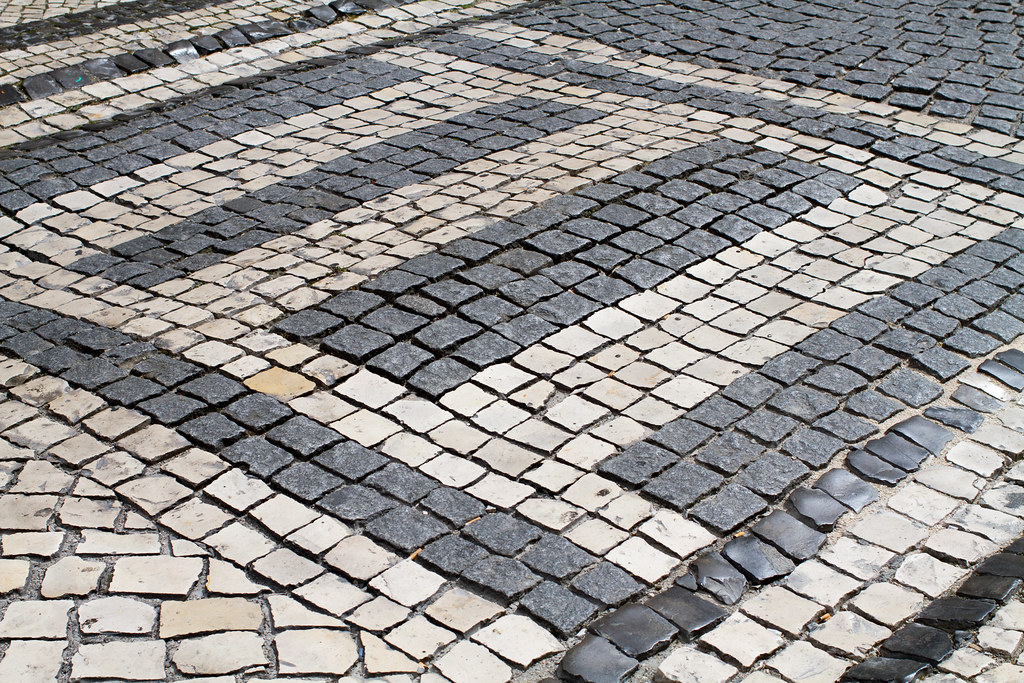 The churches, the cathedrals, were many and more beautiful than I expected.

Indeed, as I walked around the city little by little, I started to see various religious and historical buildings. The first church we saw was the Marbilla Church, built in the 16th century and one of the most important churches in the city built in the Manueline style. 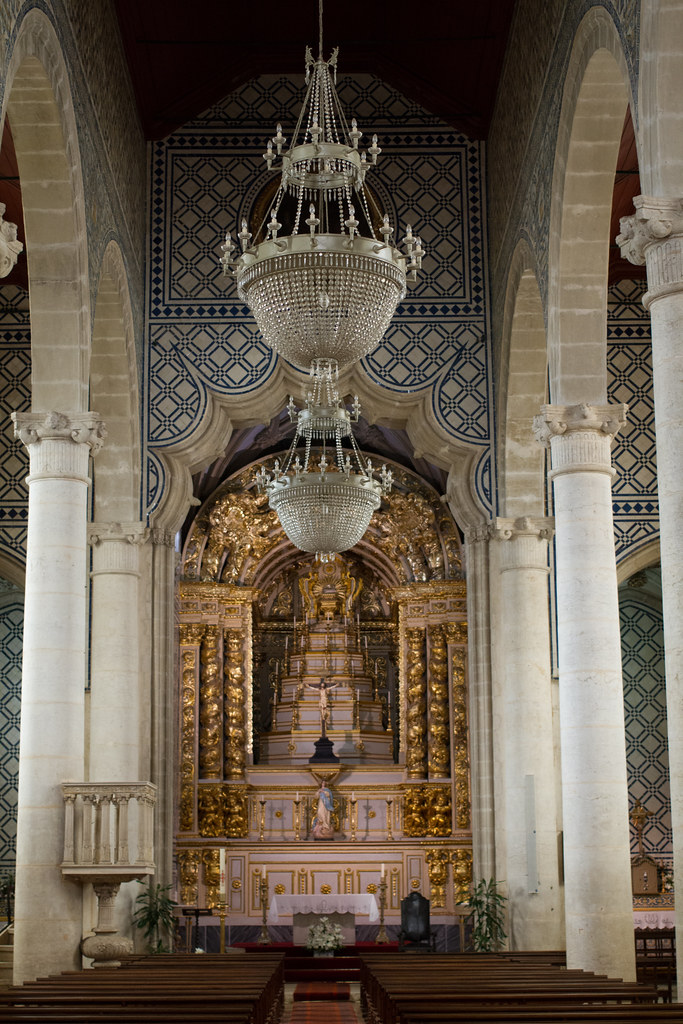 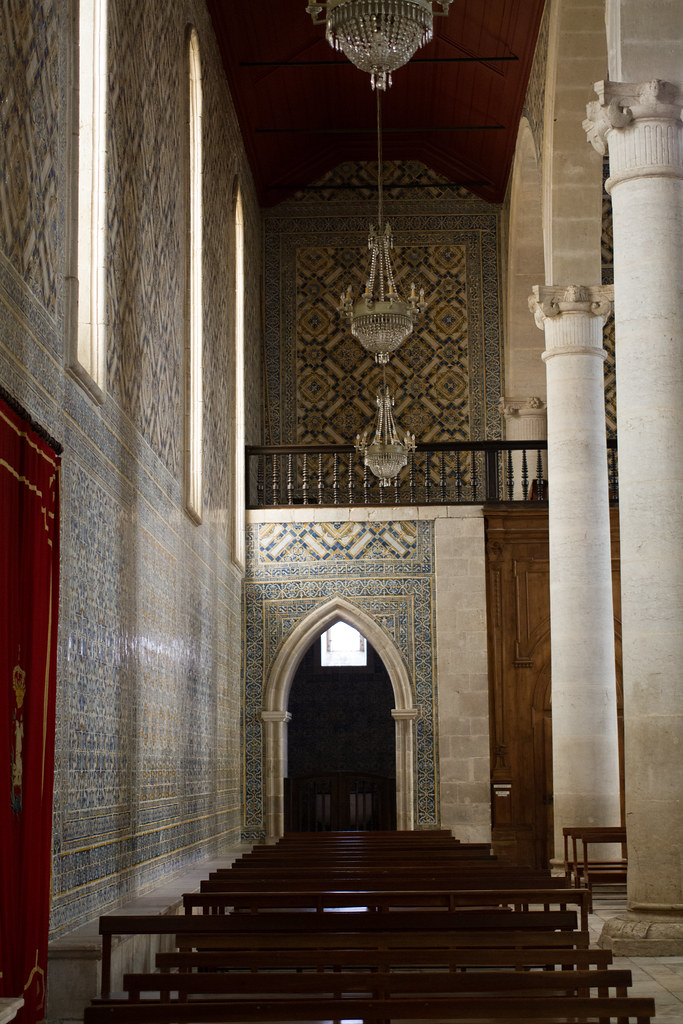 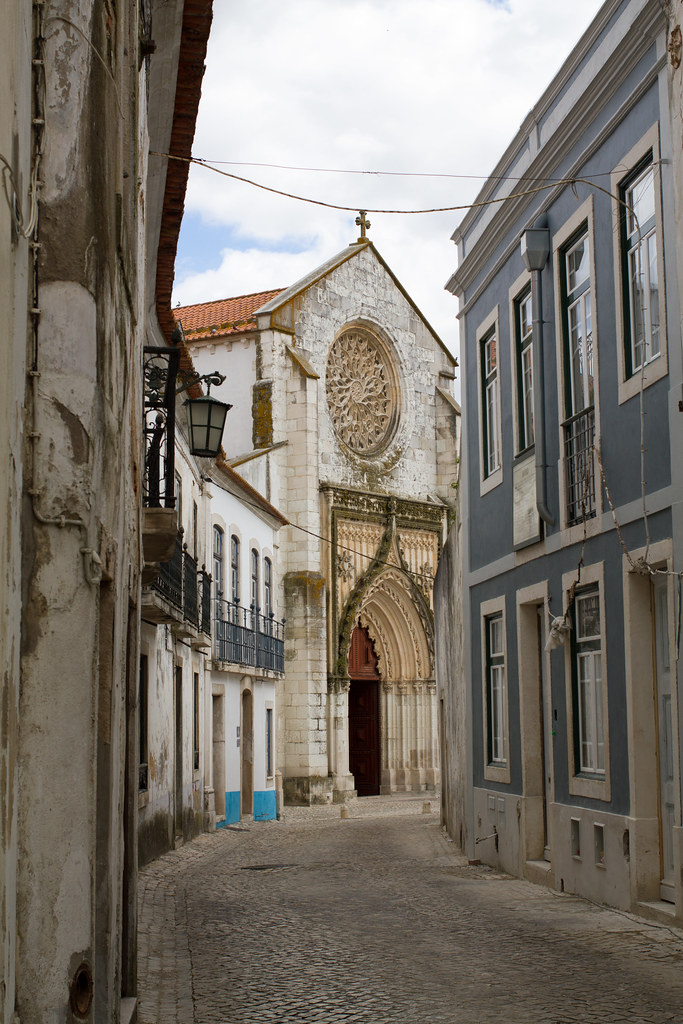 And to my surprise, this church has the tomb of « Pedro Alvarez Cabral » who discovered (or should I say reached?) Brazil. Indeed, Brazil was once a colony of Portugal, and the official language is still Portuguese, isn’t it? There also seems to be a tomb of Pedro de Meneses, the first admiral of Ceuta (a city adjacent to Morocco). It seems that this city might be related to Brazil.

We continue walking further. There was a church at the further end, so we went there. « This church was built in the 14th century, but we couldn’t go inside. So there is no photo.

I felt like I saw the architecture of the main church-like roughly walked around the city. Finally to the Cathedral near the entrance to the side where I parked. This is probably the best place to see in this city. The only admission fee is taken. 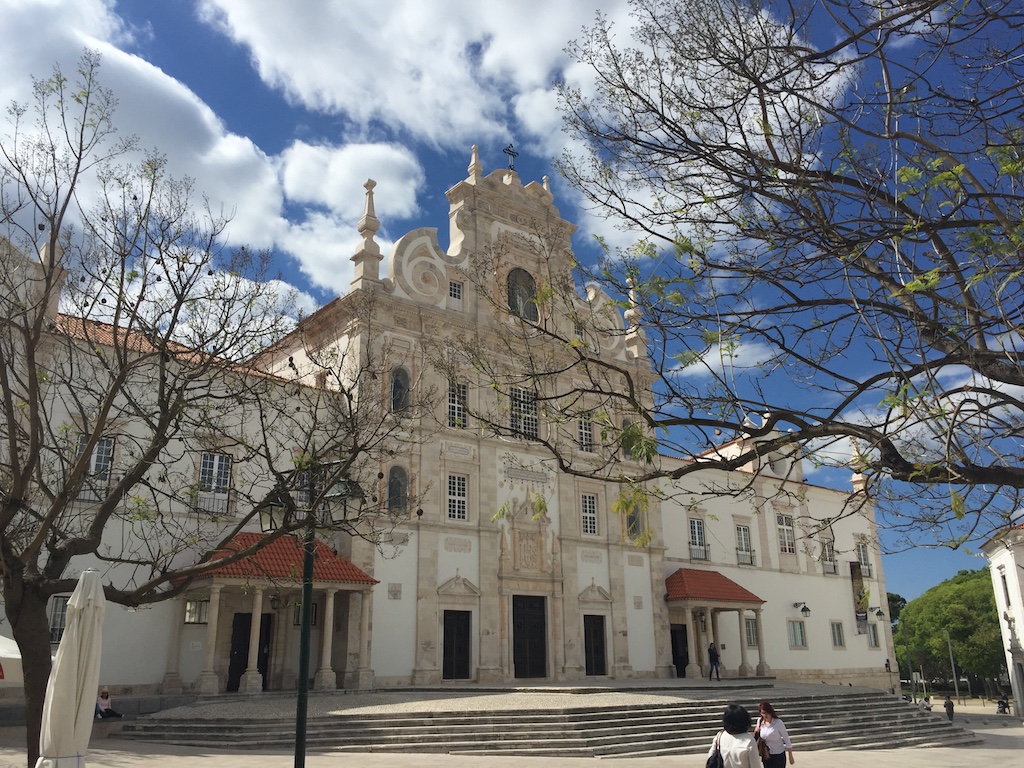 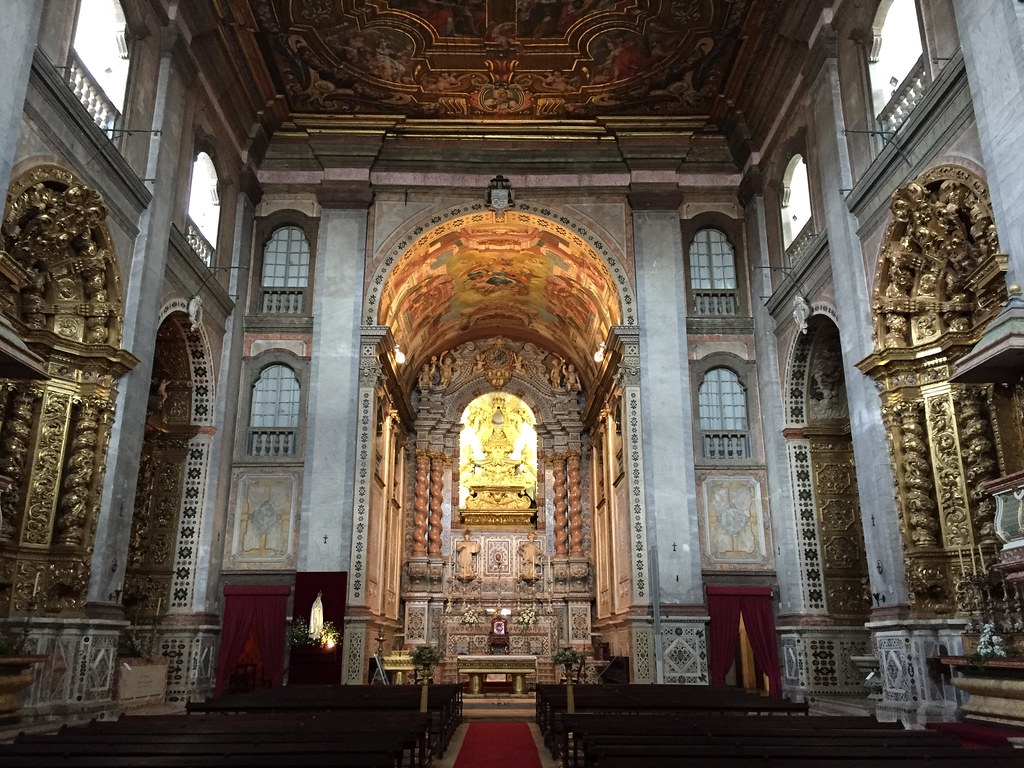 There was a chapel on the right side of the cathedral. 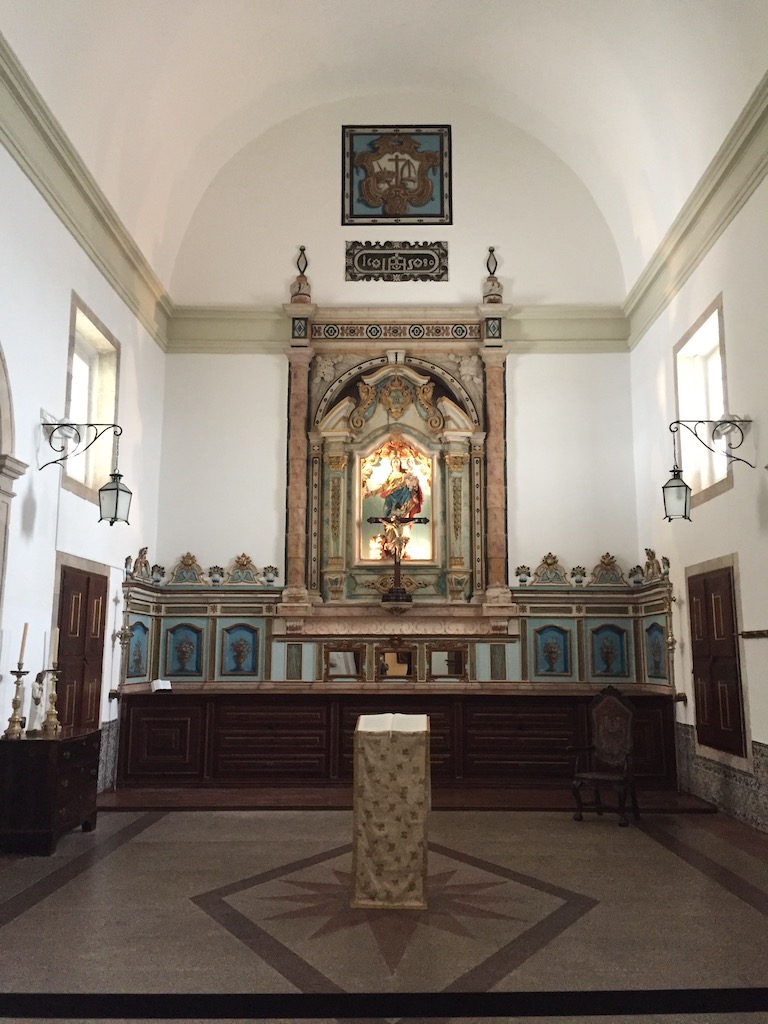 There is also a museum of religious paintings just outside the chapel. We were able to visit it together with the chapel. 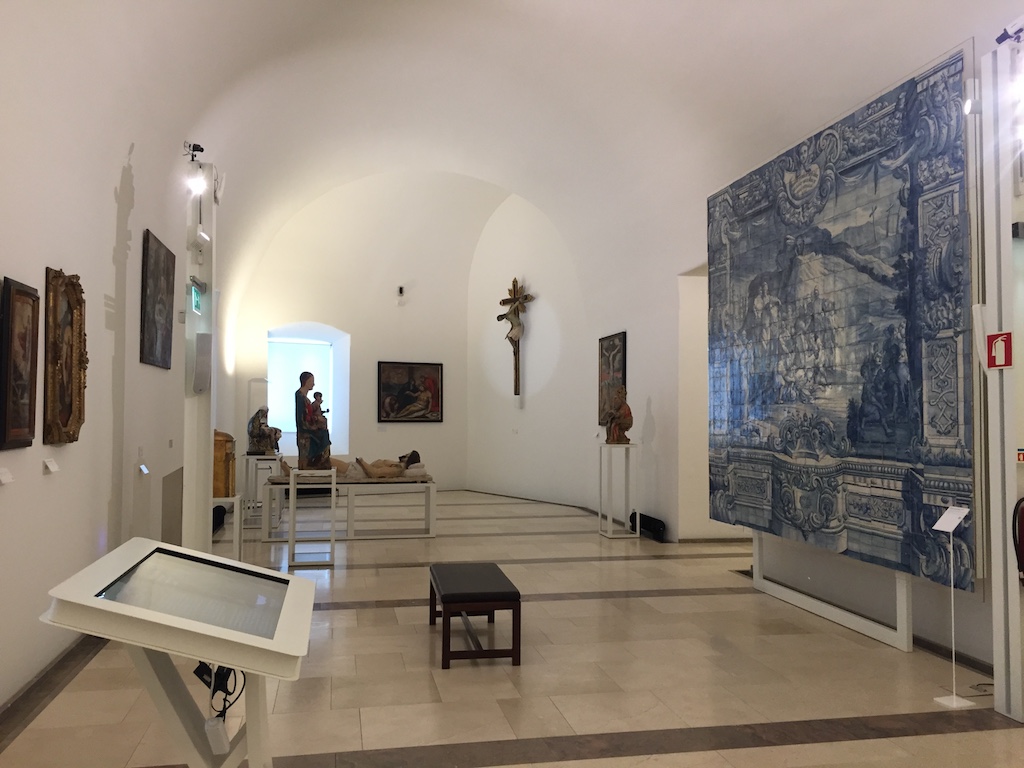 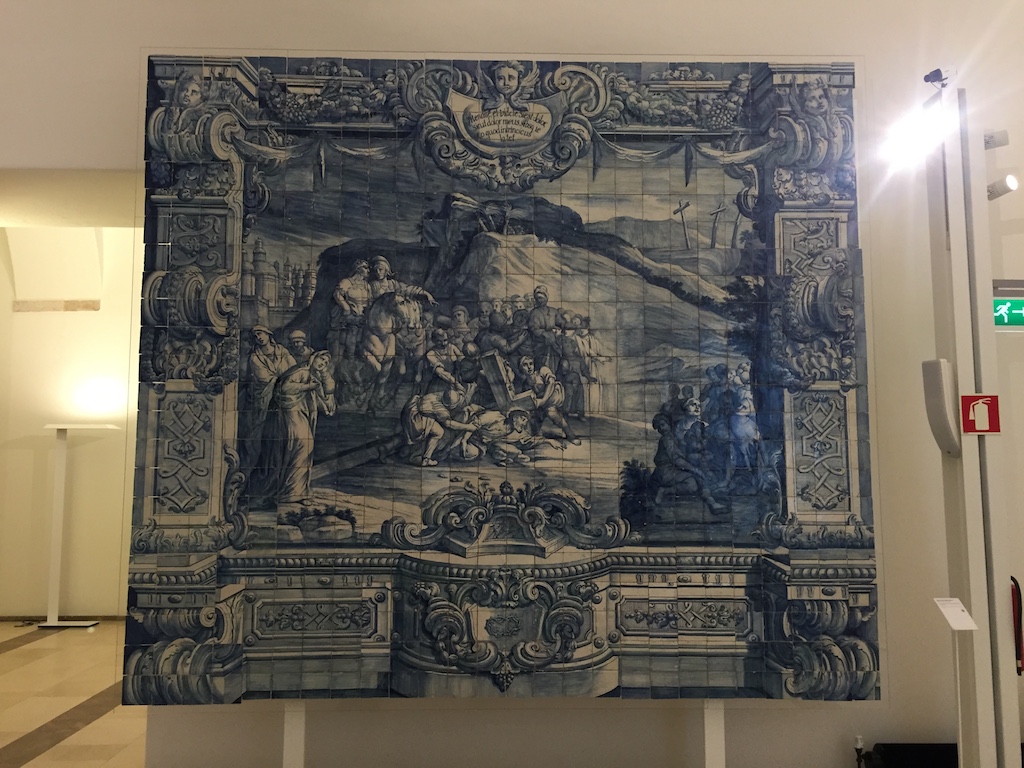 It was already about 5 p.m., so I was the only tourist. It seemed to close already when I finished watching it. It was just in time, I guess.

Finally, we went to Notre Dame da Piedade Church, which is located in front of the Cathedral and was built in the 17th century. This was a small but most beautiful church. 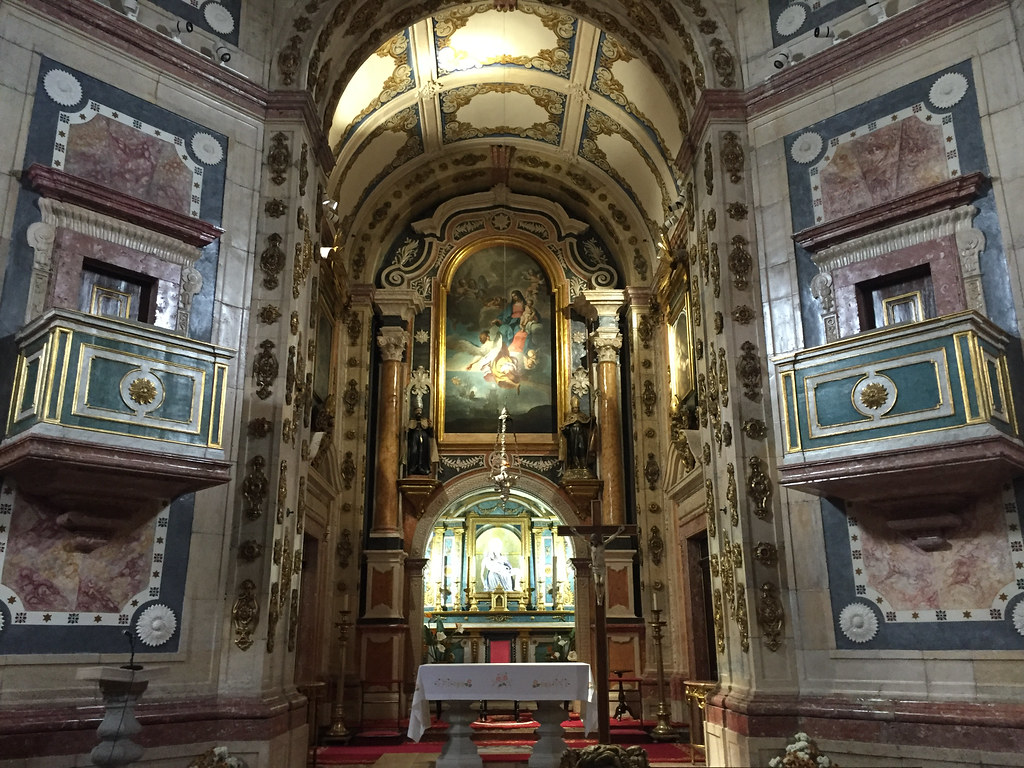 On closer inspection, there were even more sights to see, including an ancient castle!

By the way, I checked the map which I got at the tourist information center in the city. It turns out that there are many famous places in the city. It looks like there was a castle or something. 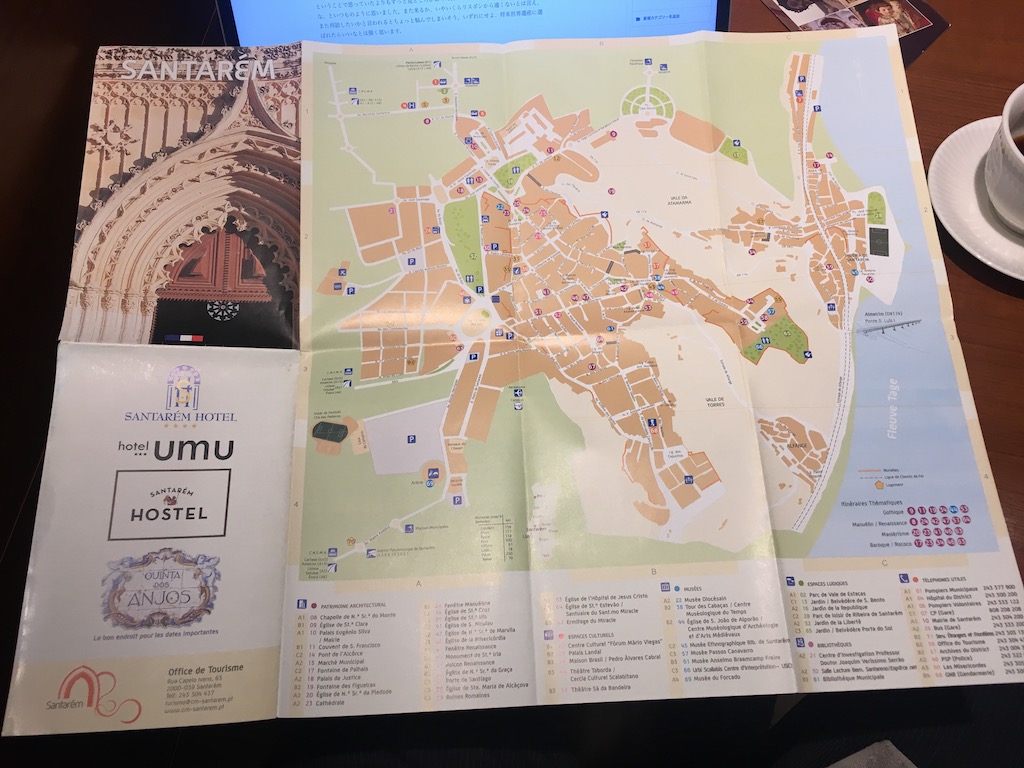 In fact, when we started exploring the city, we couldn’t find the tourist information center right away. It looked like it was going to rain, so it backfired on us that we strolled around before getting any information first.

So, as always, I wish I could spend a little more time in a city that had much more to offer than I expected. I’m not sure if I’d come back again, or if I’d want to revisit, even though it’s not far from Lisbon. In any case, I strongly hope it will be chosen as a World Heritage Site in the future.

The road to Turin, driving in Turin is quite terrible! -2012 France and Spain

April 2017 Travel to Western Spain and Portugal Part 4: Other Places to Visit No. 3 – Braga

Civita de Bagnoregio – ★★★★★: Tour of Italy’s most beautiful villages No. 1