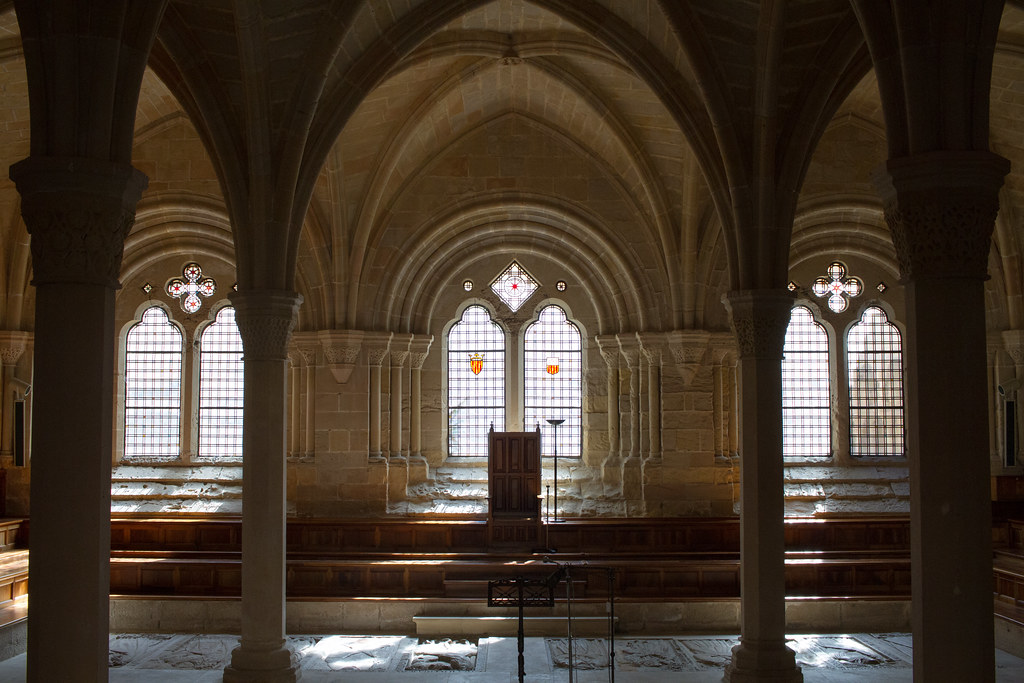 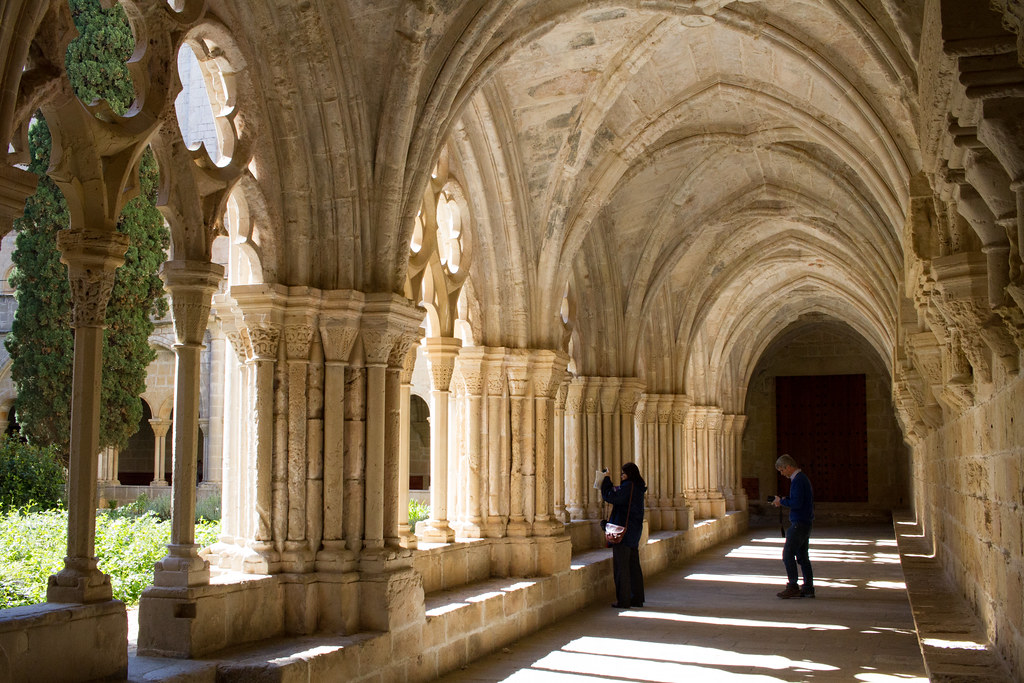 Cistercian monastery in the Catalan countryside

The location is about 1 hour and 30 minutes from Barcelona by car, and the availability of public transport is unknown. It is likely that you will have to take a car or bus first. All foreign tourists did so.

Speaking of Catalonia, Catalan language is very similar to French. Is that an influence? Perhaps, the road signs are also very French. I’m more familiar with French driving, so I feel relieved. 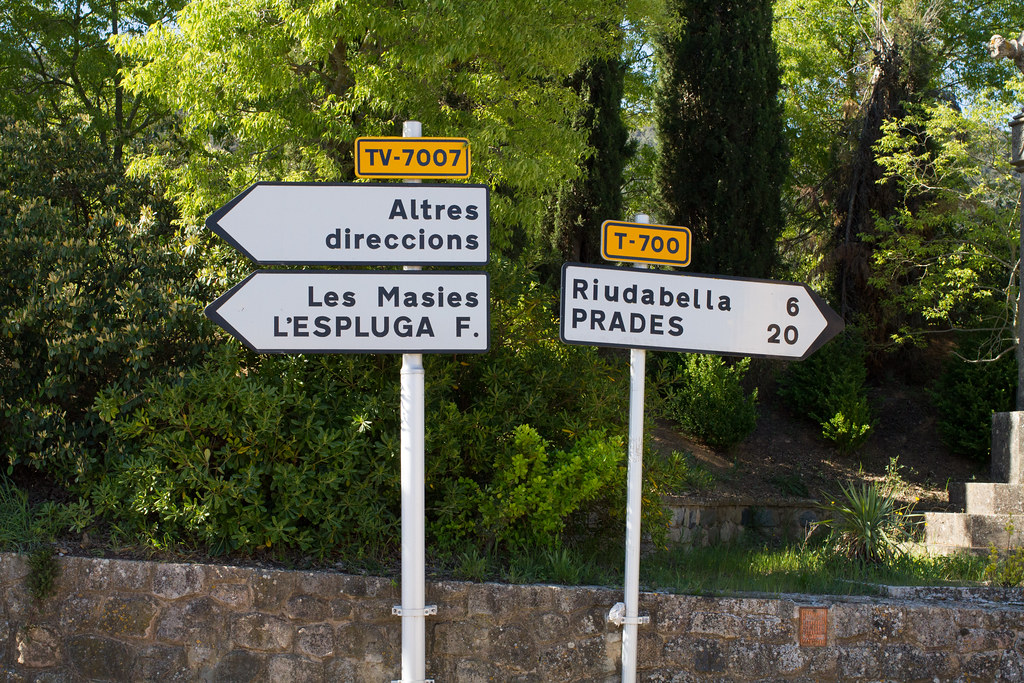 The parking lot was plentiful. It was so big that you could park anywhere you wanted. I wonder if that many people will come though…

If you look carefully, you can see a big beehive on the tree in front of us (top left of the photo)… I knew there would be a lot of bees…. (I didn’t notice it when I was there…)

Guided tours are the only way to see the interior.

The inside of the monastery is open to visitors on a guided tour. You have to buy a ticket at the entrance and wait at the entrance of the monastery until the appointed time, then the tour starts. The explanation is all in Spanish. There may be some in English, but I was able to join the Spanish group because of the time. However, there were Japanese pamphlet and French pamphlet, so we got them at the time of ticket purchase, and we listened to the guide’s talk while looking at them. 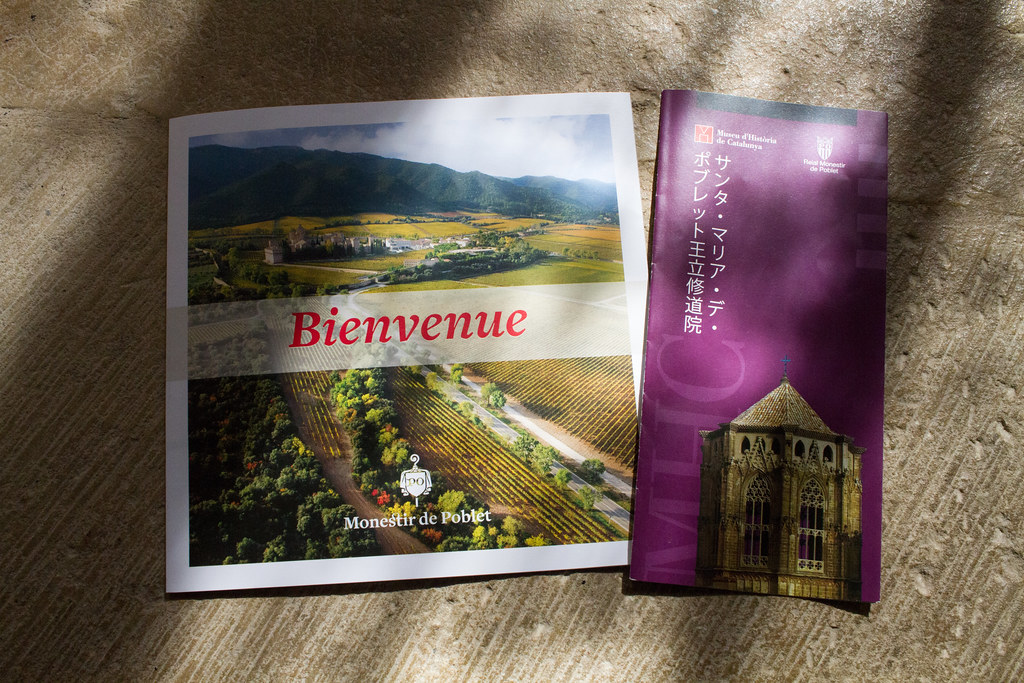 There is not much time before the start time, so we hurriedly moved to the facility. It was a beautiful day. 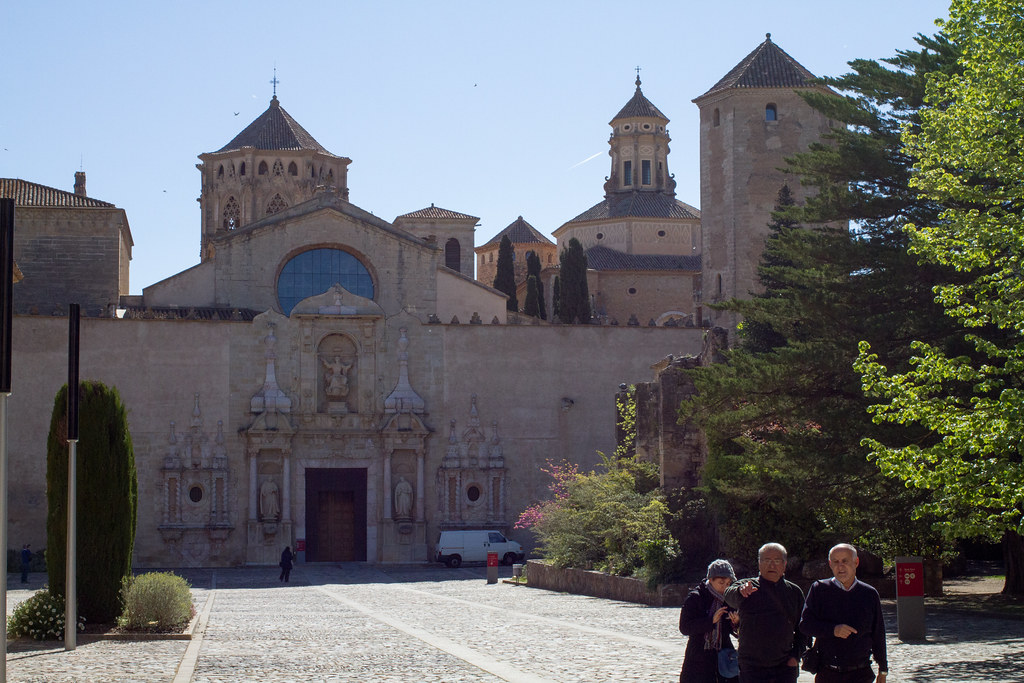 The following is a description of the inside of this monastery with photos according to the French pamphlet we received there.

The monastery of Pobleix belongs to the category of « Catalan Gothic architecture », and the main reason why it was chosen as a World Heritage Site is that it is one of the best preserved. I don’t know the details, but I’ll introduce some excerpts in order. 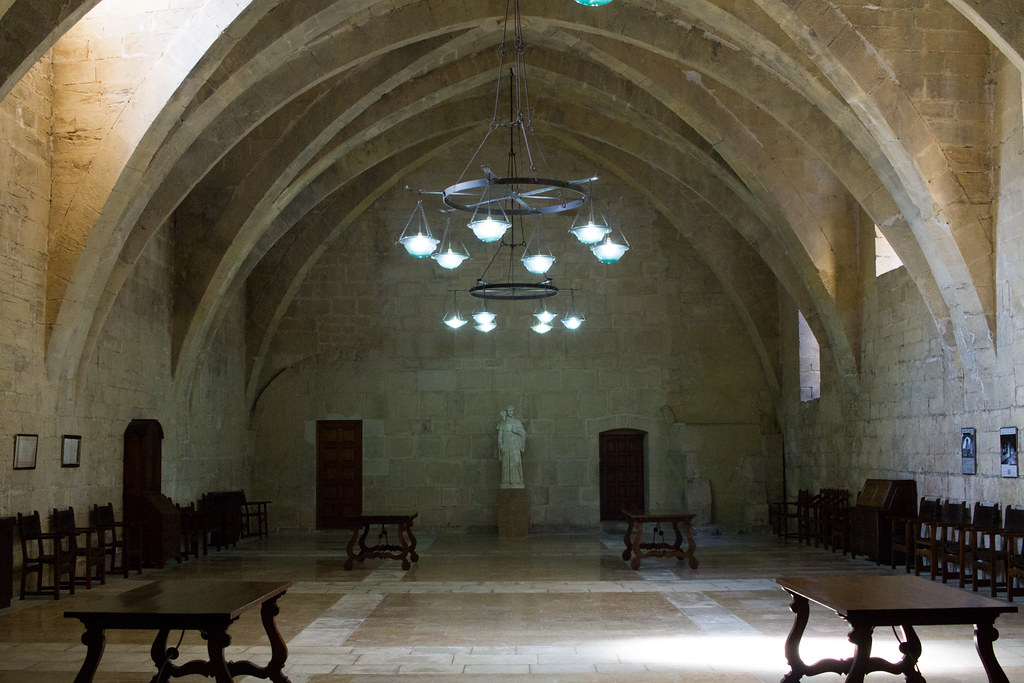 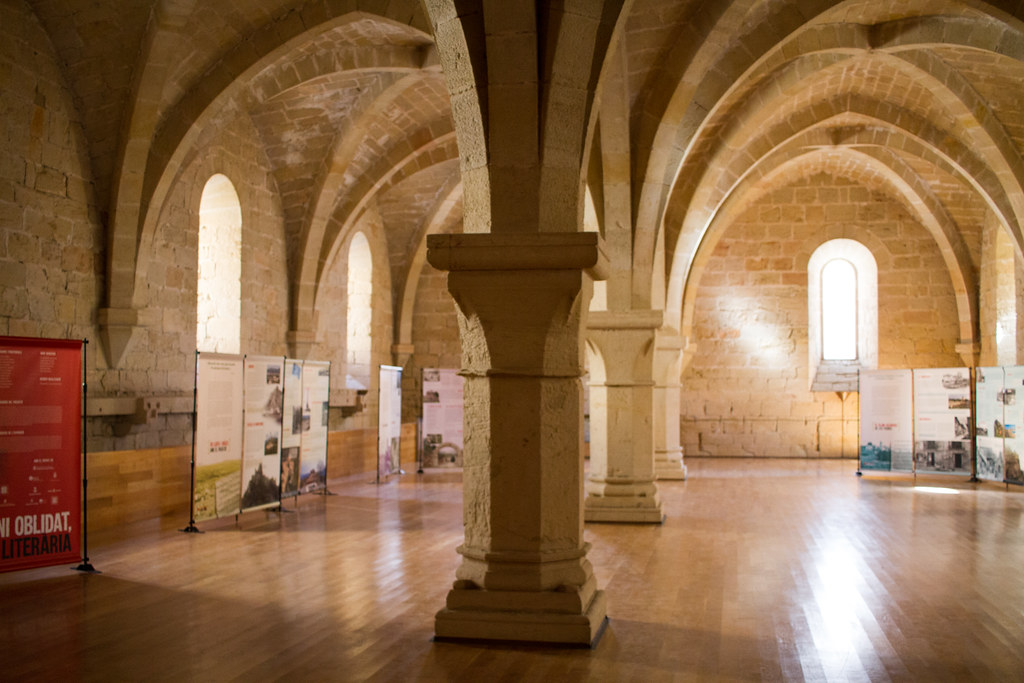 Next, you will be guided to the Cloître majeur et pavillon du lavabo (Cloister Room). It was built in the 12th century and has been renovated several times since then. 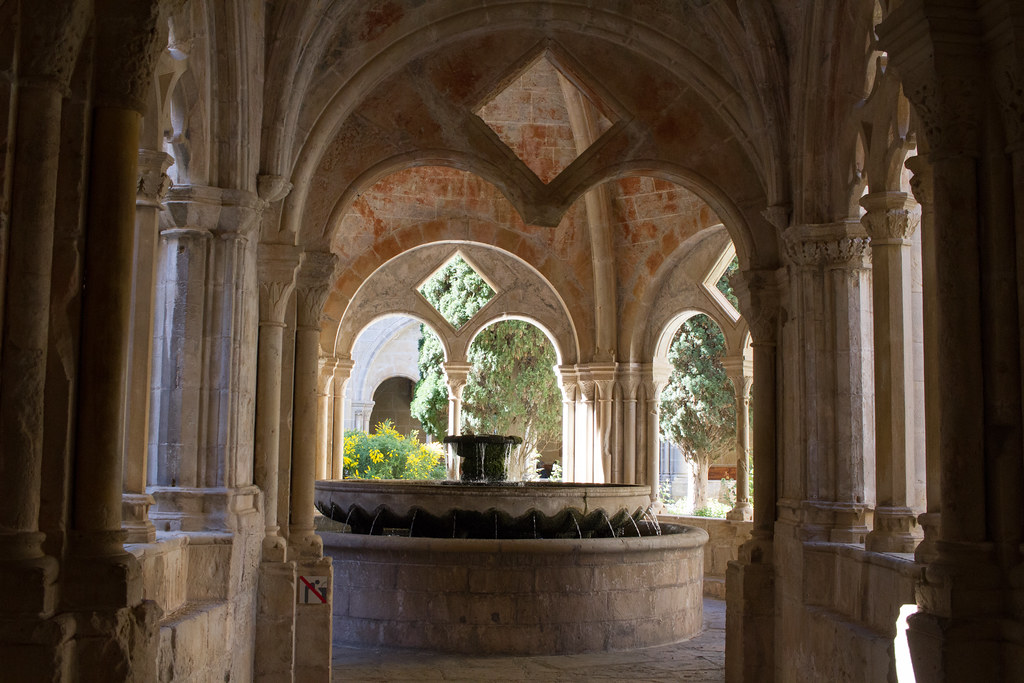 This is the « Réfectoire des moines » (monks’ refectory). It is one of the facilities facing the cloister. It was also built around the 12th century. 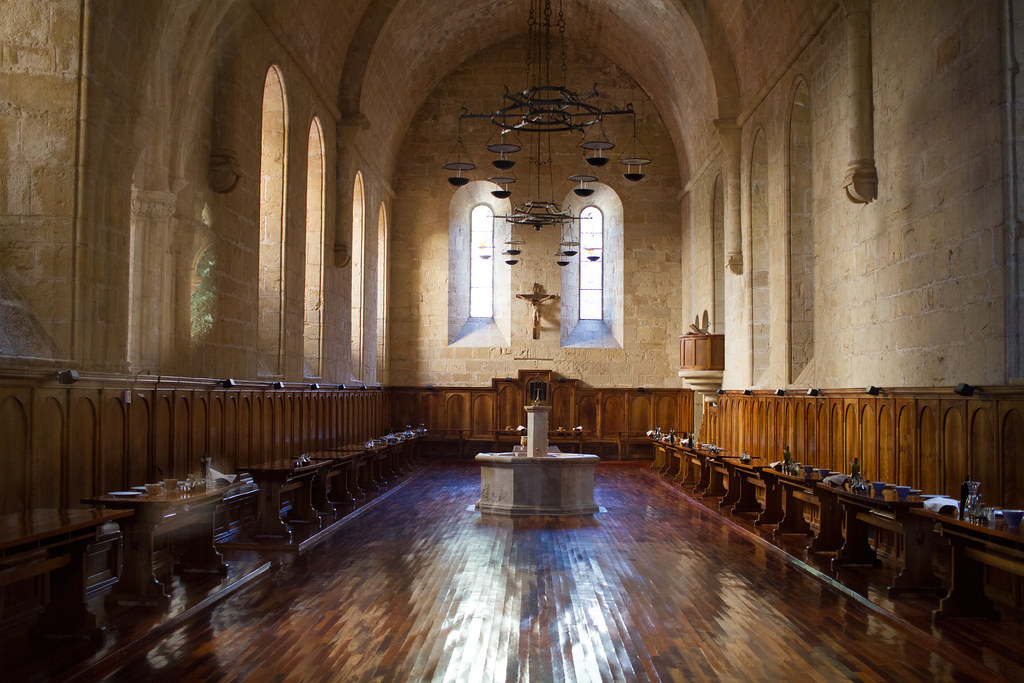 The most impressive of the rooms facing the cloisters is the Salle du chapitre, dating from the 13th century.

The next stop, the Abbatiale, is restricted to a limited number of visitors, so we waited in the cloister for a while until the group in front of us had finished visiting this cathedral. 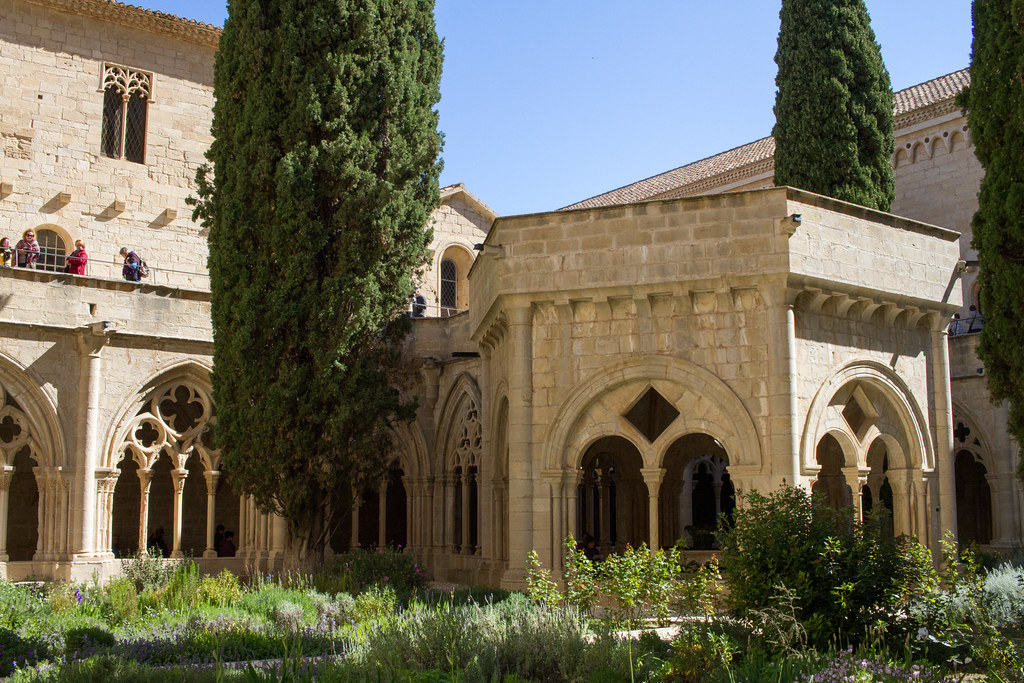 However, we were escorted inside in about 5 minutes. Basically, the guide was in Spanish, but he also spoke French very well. Apparently, there were also French tourists. He spoke English to me, the only Japanese, but mostly only one word of content. However, when they found out that I had a pamphlet in French, they suddenly started to talk a lot in French. Well, I can’t understand most of them (laughs).

Now, the cathedral attached to the abbey, this is the best place to see. First of all, there is the familiar pipe organ on the right as you enter. But actually, it was built relatively recently, in 2012. It says on the brochure that it was built by a Swiss company called Merzier Orgelcau AG. 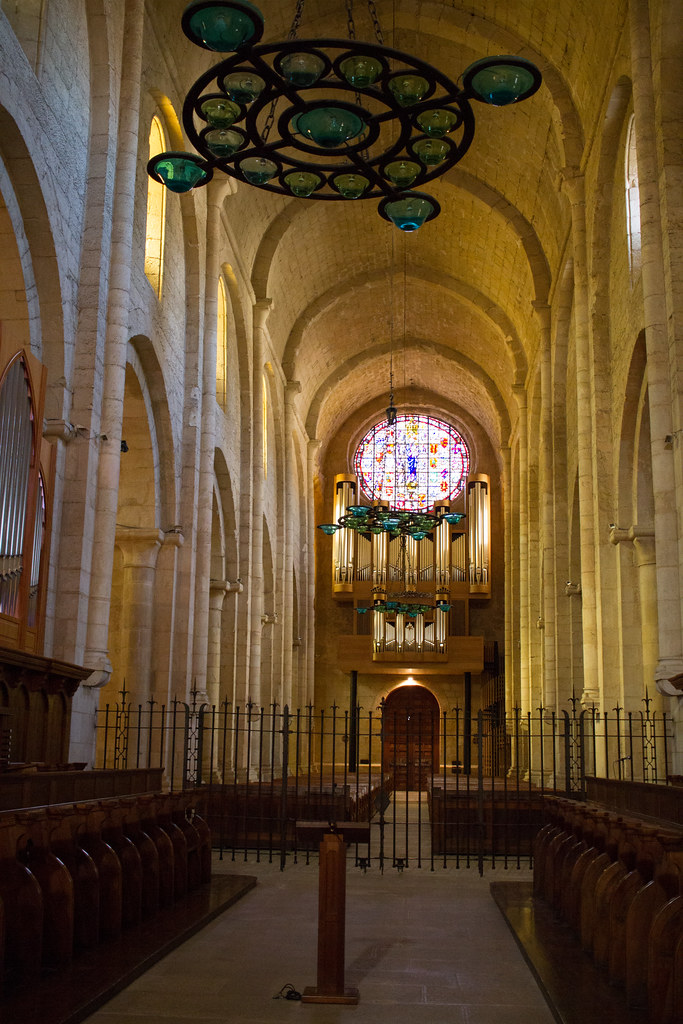 Next is the altar. I saw the same thing in a Mudejar church in Teruel. It seems to be called « retable ». I don’t remember seeing it in other countries, but I guess it is popular in Aragon and Catalonia. 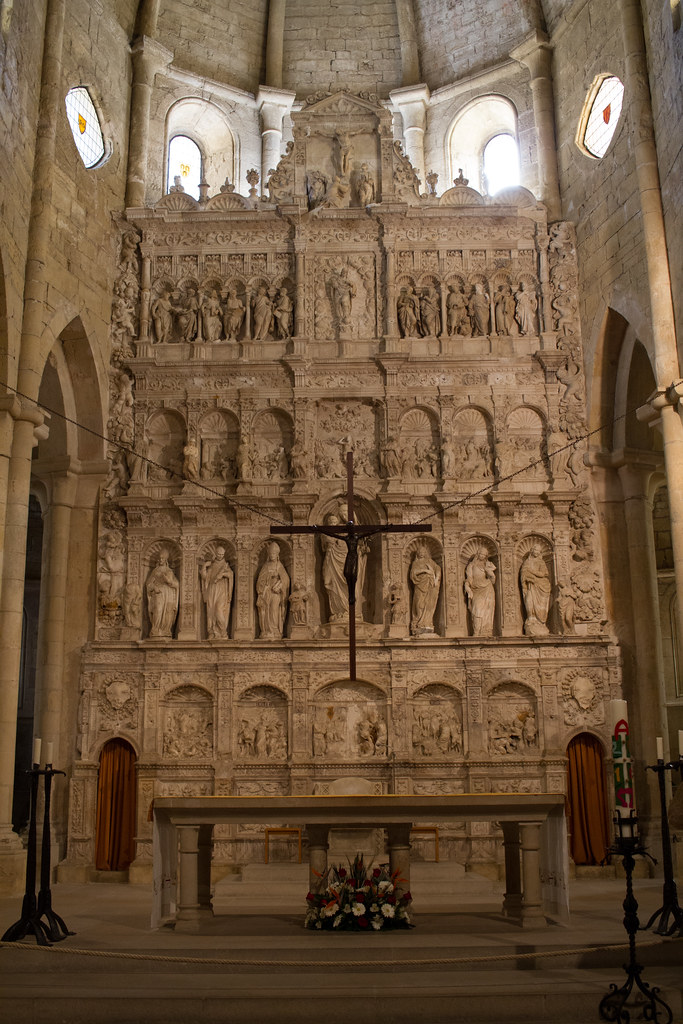 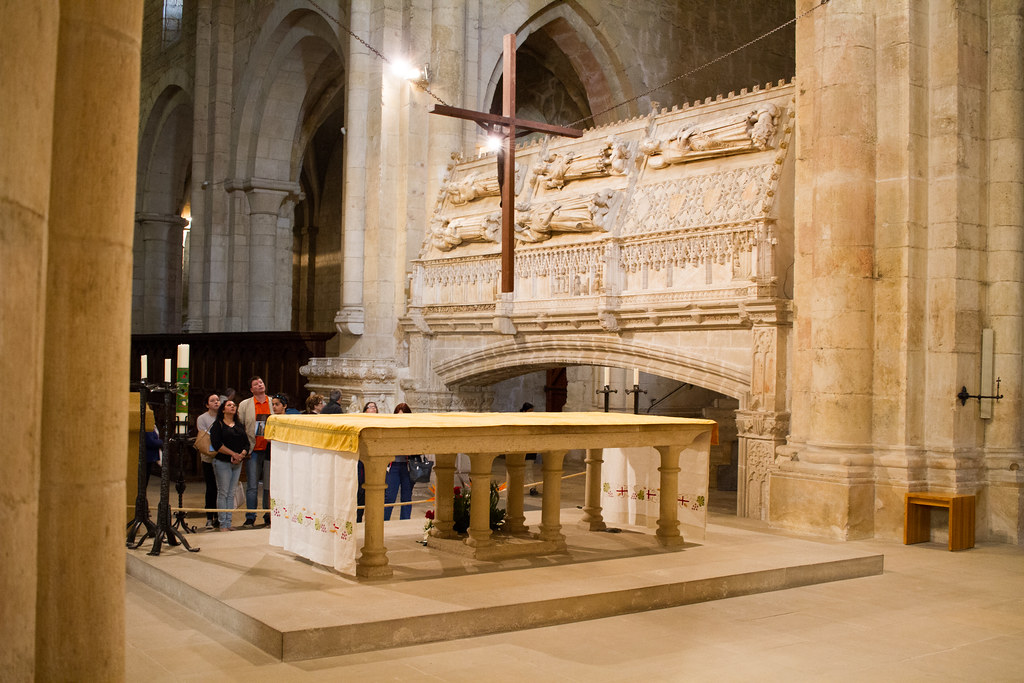 In front of the altar, on the left and right sides, there are splendid side pillars with reliefs inscribed with important people, as shown in the next photo, which are actually the tombs of royalty who were active in this area between the 11th and 15th centuries. 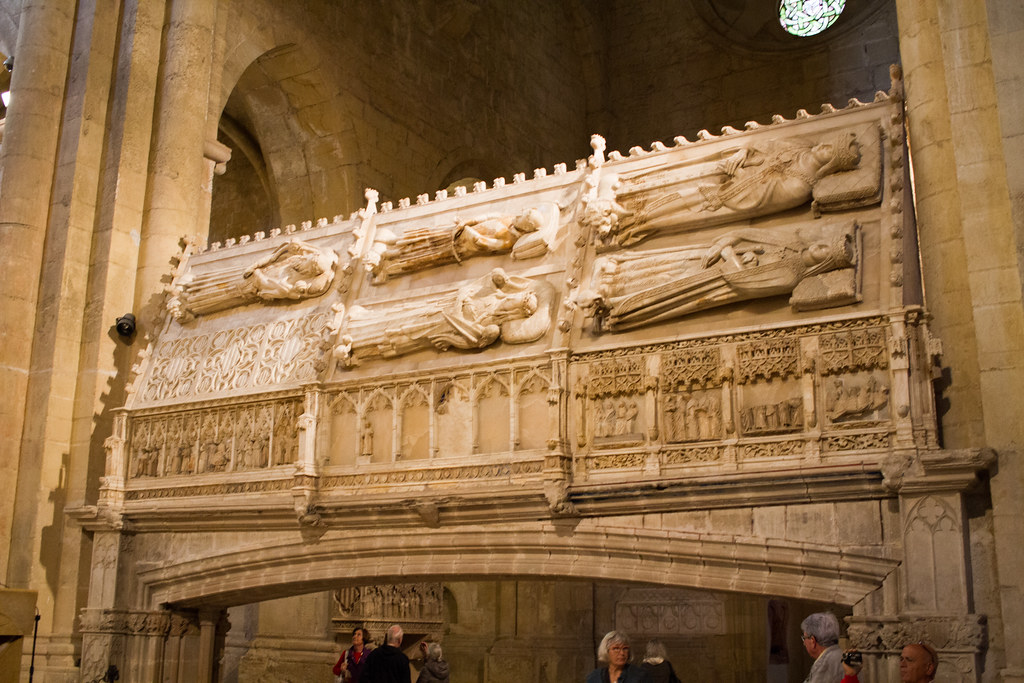 After the chancel we were led upstairs to the balcony. 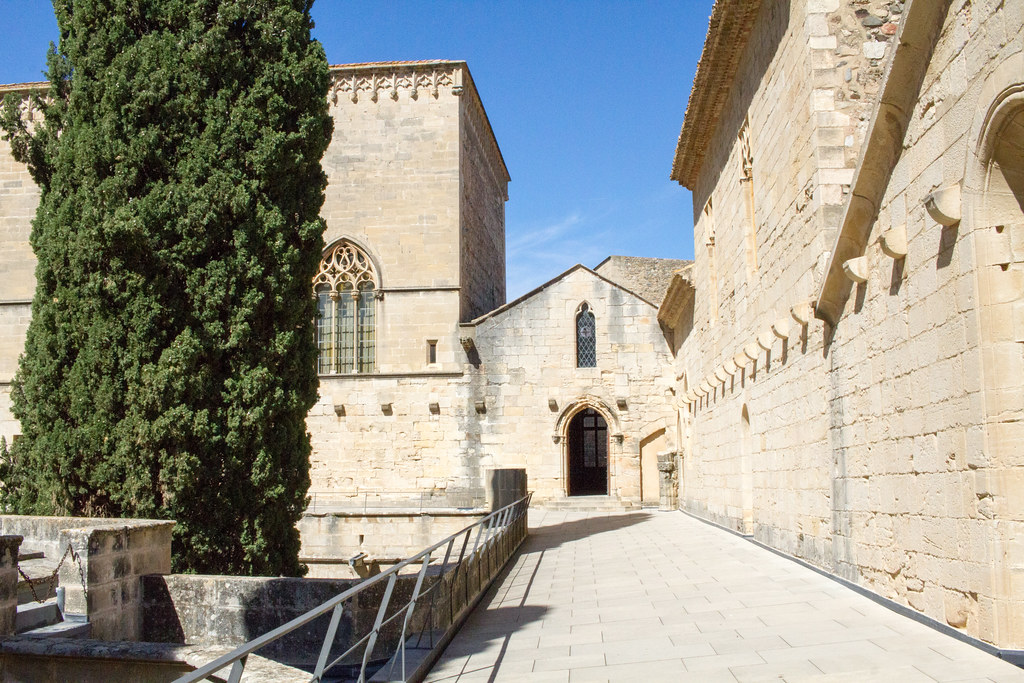 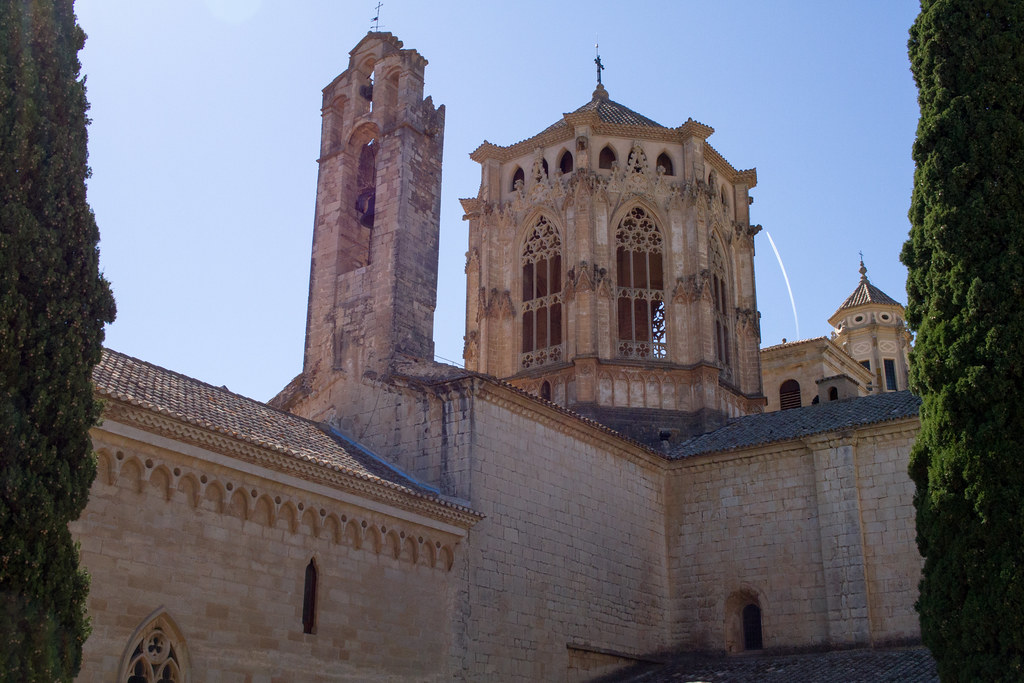 After the guided tour, we went to the Palais du roi Martin, which is just beside the first entrance. This palace was built around the 14th century, but it has been unfinished since the death of King Martin in 1410. Now this place is a museum of the abbey’s collection, but there is a fee to see inside, but it was only 2 euros. However, all the tourists except me went back without seeing the inside at all when I understood that I had to pay. 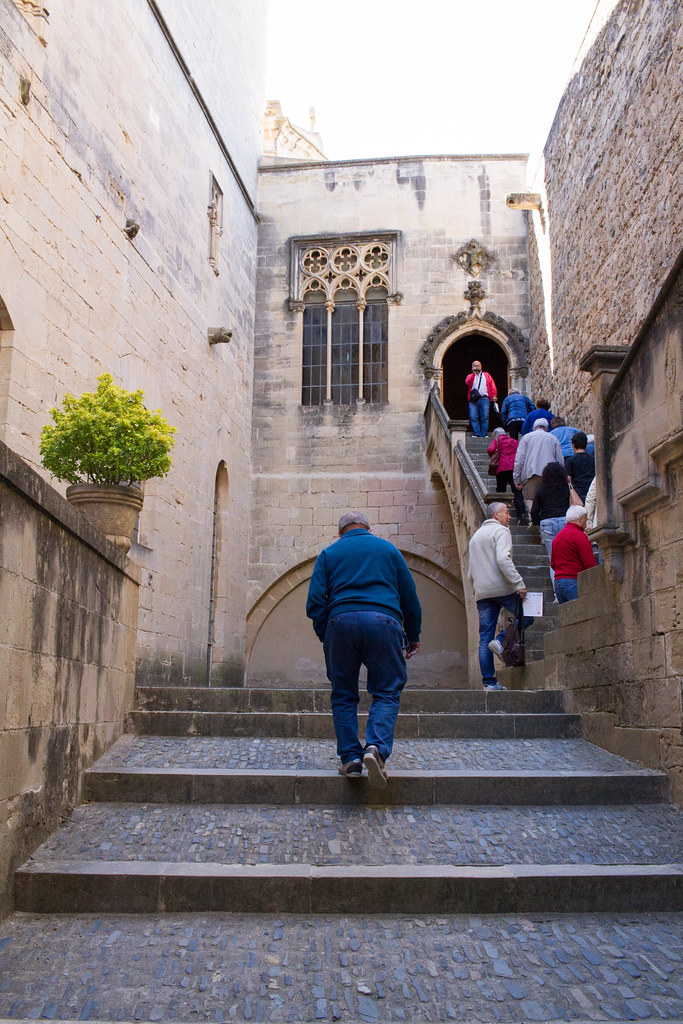 I was left alone at the end of the day and quietly admired the valuable items in this museum. However, there were not many exhibits, and they were displayed sparsely in two rooms. 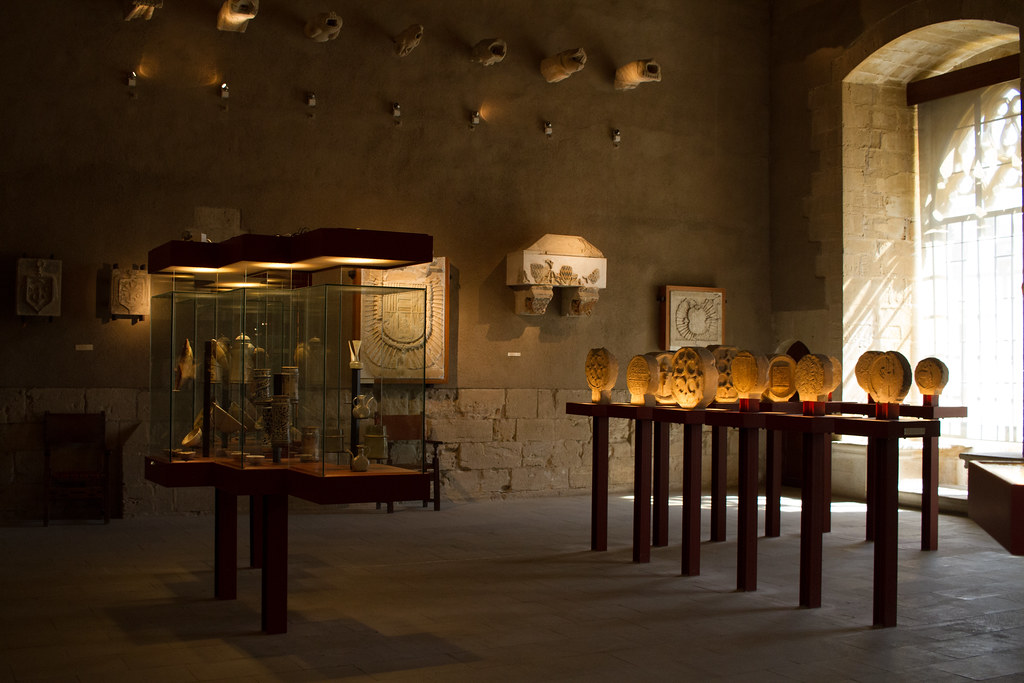 This was the end of the tour of Poblei Abbey. The size of the monastery was moderate and the tempo of the guided tour was moderate, so it was very easy to appreciate. Above all, it was beautiful. I think it is a place of interest that is definitely on the top of the list of recommended world heritage sites that I visited.

In addition, this monastery makes wine, so they were selling a lot of wine at the souvenir shop at the entrance, but I gave up crying to buy it because it was still early in the trip and difficult to preserve.

Local Time: September 15, 2014We rented a "rather expensive" car at Charles de Gaulle Airport and headed north. The firs...

Date of visit: May 15, 2012, around midnightAfter seeing San Migian, we went on a pilgrimage tour again. Our goal is to ...

After all, Spain is all about wine! I had an image that it was cheap and good quality.Cheap and tasty drinks everywhere!...