Now it is the third day of our stay in Barcelona. On this day, we will do some sightseeing in Barcelona in the morning and then move around this city. If the weather was good, I was planning to see the ruins along the sea in the city called Tarragona early in the morning, and then go back to Castile again, but unfortunately it seemed to rain, so I decided to leave it for next time.

Now, on the last day of sightseeing in Barcelona, we went to « Villa Güell » which was designed by Gaudi in his younger days first thing in the morning. It is located in this area relatively close to the port of Barcelona.

In 1945, Merce Güell López, the youngest daughter of Eusebi Güell, who had commissioned Gaudí to design the Güell House, gave it to the Barcelona Provincial Council for cultural use.

The location is in a back alley.

I don’t know what it was like at that time, but this Güell House is actually located in a narrow alley in the city, and although it is indeed a mansion, it looks very different from the typical mansion with a big garden that people usually imagine. 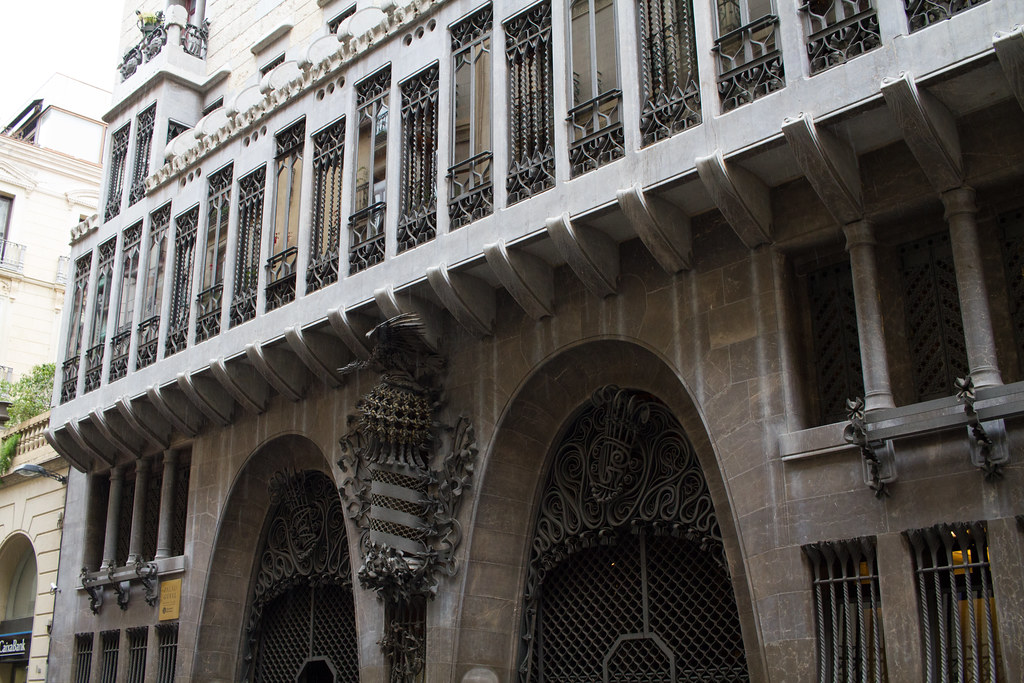 So, you can easily reach this place from Liceu metro station (L3) in a few minutes on foot, but it might be hard to find if you take the wrong direction.

You can also book the Güell residence online.

These tickets can also be booked online in advance, just like the ones for Park Güell and Sagrada Familia.

It is possible to buy directly at the site, but during the busy season, even if it is not, I think it is better to book in advance. Especially in Barcelona, the number of tourists is increasing year by year, or maybe they are restricting the entrance, in any case, it might be difficult to visit Barcelona with the « old » sense we had before.

In addition, I made a reservation for 10:00 in the morning.

One of the young Gaudi’s works

The next morning, I had a quick breakfast at a cafe near the hotel and then took the subway to the site. I arrived there about 20 minutes ago, but there were already a lot of people, but most of them were Chinese group tourists. But I couldn’t change it now, so I waited for the opening in front of the building.

Then it was 10 o’clock and the museum finally opened. There were a lot of Chinese tourists before the opening, but they didn’t seem to go inside. I witnessed the same scene in Carcassonne before. So, when the museum opened, we were able to enter the museum without waiting in line, and it was unexpectedly empty.

At the entrance, you get an audio guide and a pamphlet. Because I chose Japanese version of the audio guide, I was given a pamphlet in Japanese. If I had chosen French audio guide, it would have been French pamphlet, but I haven’t become able to speak French that well yet, so I gave up. (*This is a trip to Spain, but most of the places support French, so I tried to get a French pamphlet as much as possible for my study.

Viewing is by number. We start with the underground stable. I think it was explained in the audio guide that the structure had to be well supported because it was the lowest part of the building, and that it had to have ventilation because it was a stable. 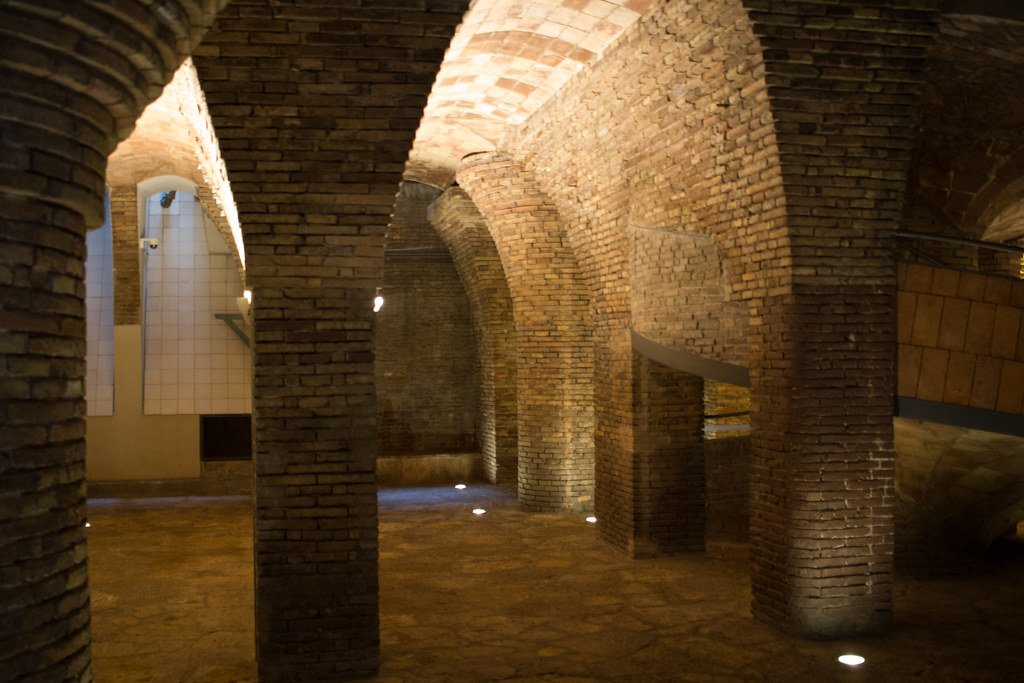 We then took the stairs up to the upper floor. We passed through beautiful staircases and gates to a hall in the center of the building. 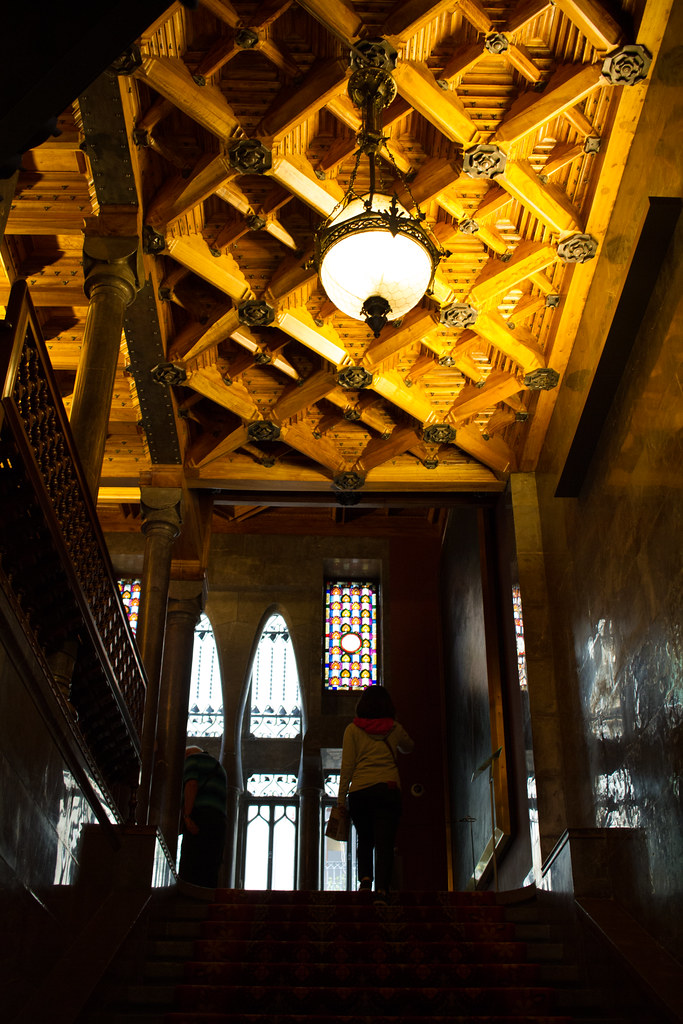 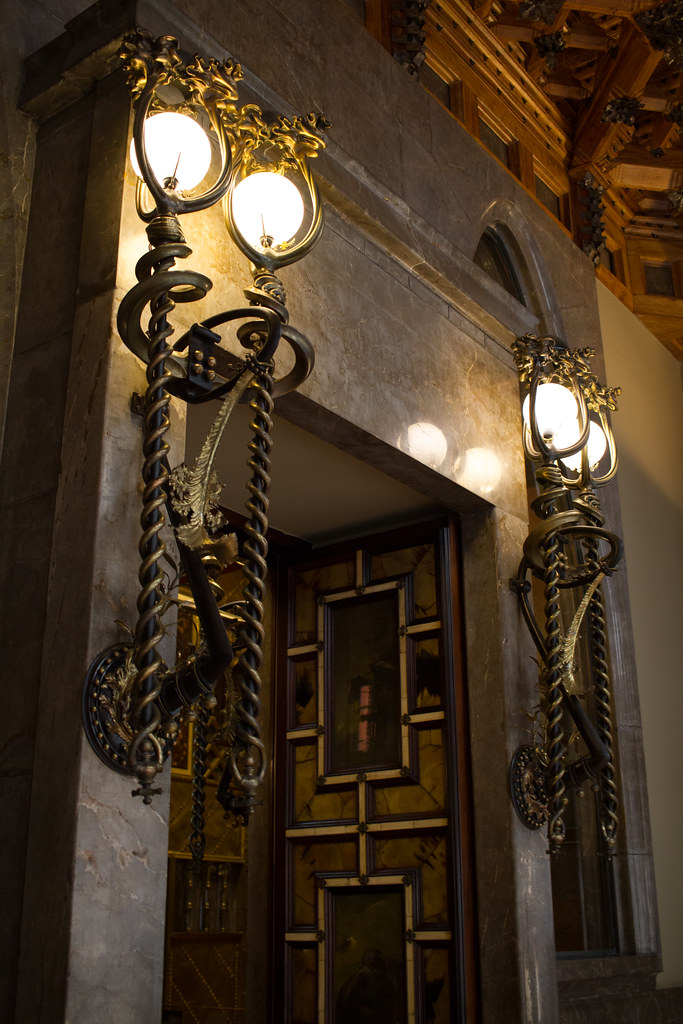 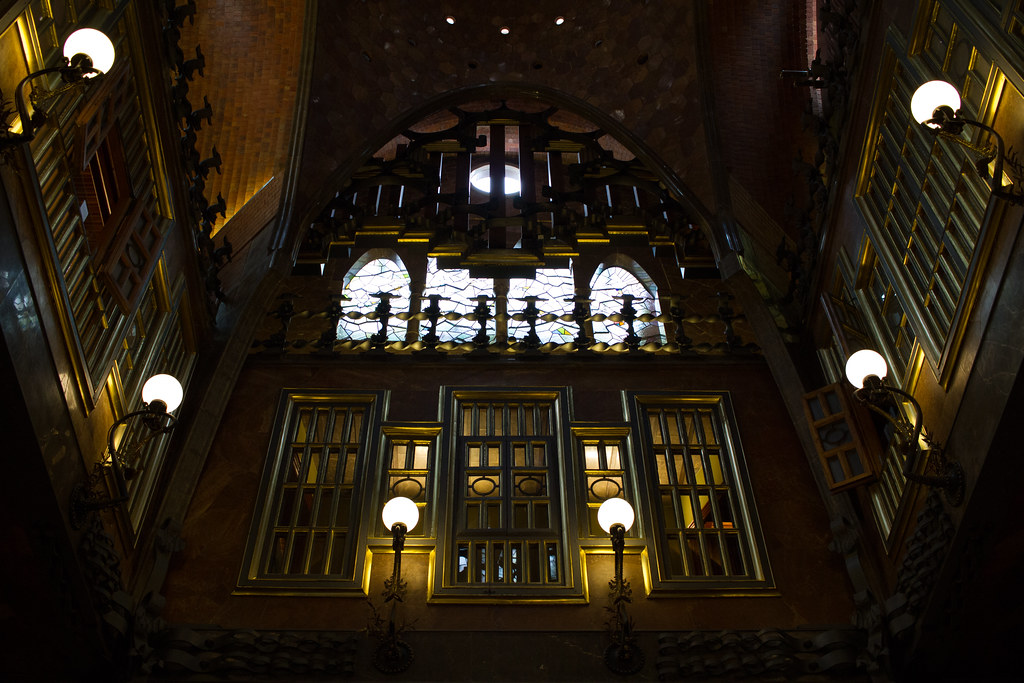 In this central hall, there is a pipe organ. And this organ is played periodically, though it is automatic. The sound of the organ was echoing in the central hall. As expected of a mansion. 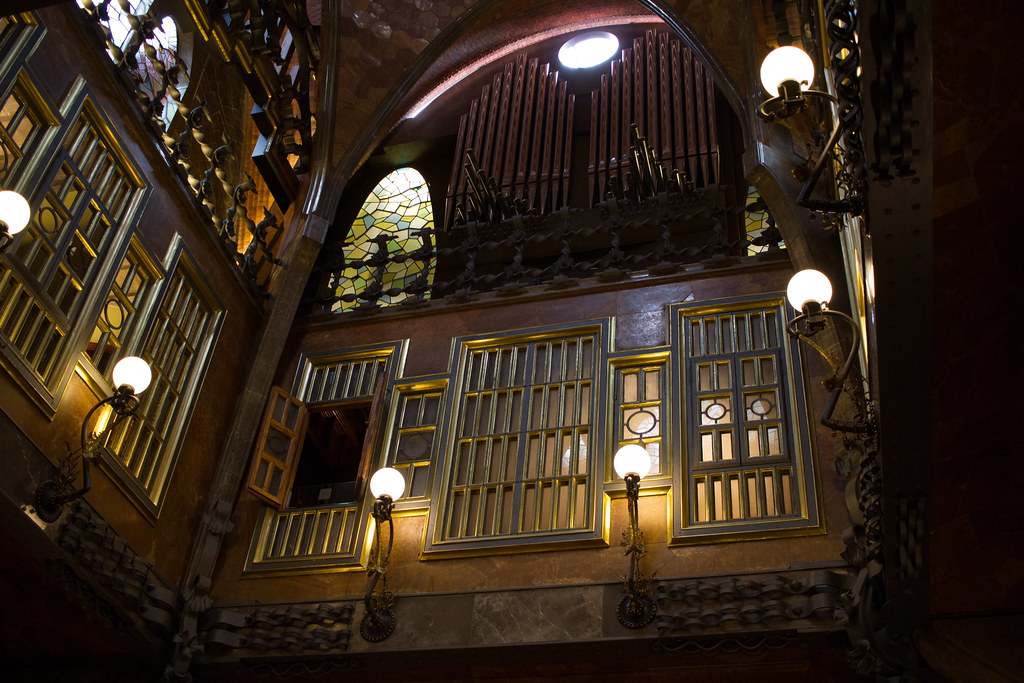 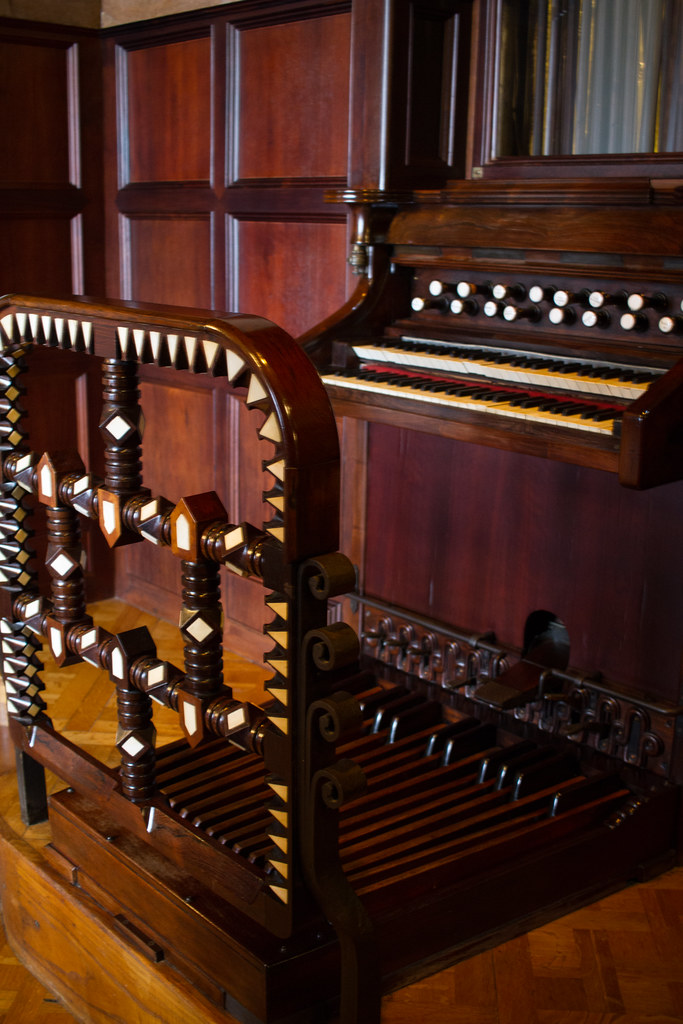 The Villa Güell was built between 1886 and 1890 and was the work of the young Gaudí. It is said to be the only building that Gaudí completed that was not reconstructed after its completion. 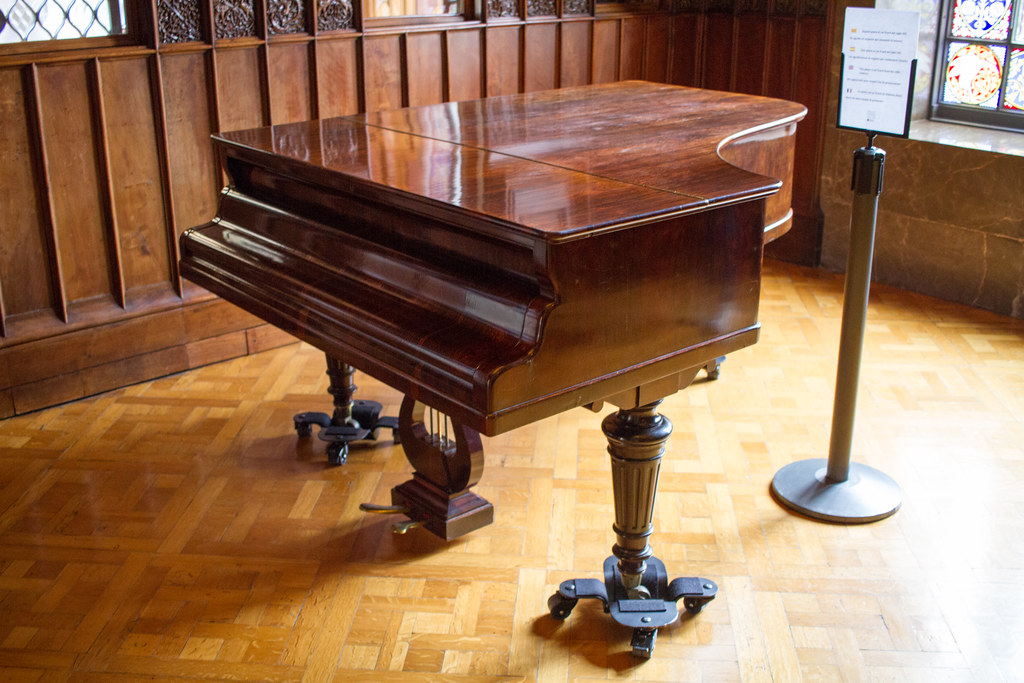 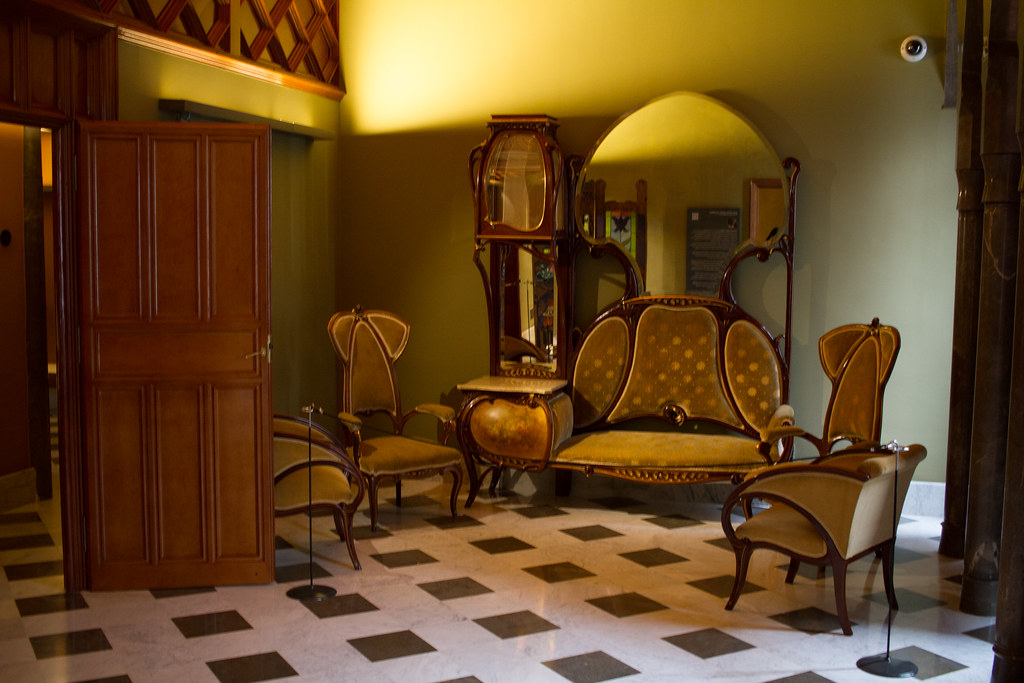 In contrast to Montaner, who designed the Hospital de Sant Pau and the Auditorio de Catalunya, Gaudi’s works are not so flamboyant in terms of colors, but they are characterized by more curvilinear expressions. Curvilinear, or rather, geometrically calculated curvilinear beauty, I felt.

Also, this is only an amateur impression, but compared with Park Güell and Sagrada Familia, it has a relatively calm atmosphere, perhaps because it is an early work. I think I prefer this atmosphere. 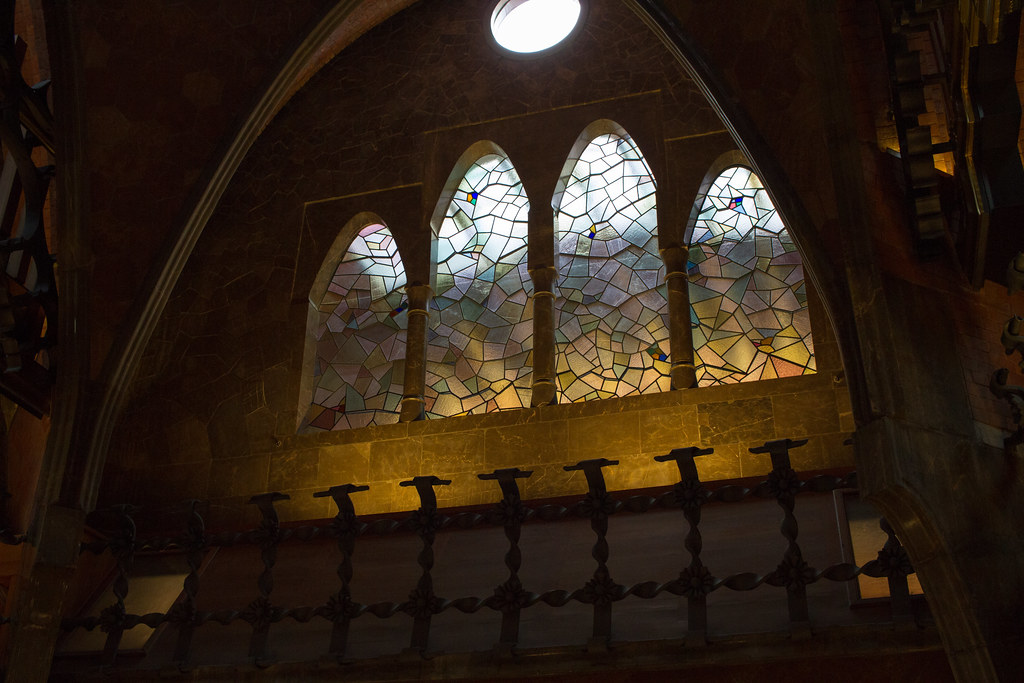 We couldn’t see the rooftop because of the rain.

Unfortunately, it was raining. But I thought it didn’t matter because it’s a mansion, but the terrace on the roof is also a highlight, but they don’t open it on rainy days, so I couldn’t visit it.

Who is Mr. Guell?

Mr. Eusebi Güell was a politician and businessman who was born in Barcelona in 1846 and died in Barcelona in 1918. In addition to his ability and talent as a businessman, he was a very educated man who studied various fields such as law, sociology, physics, chemistry, economics and mathematics in France and England when he was young.

He was also a man with a great understanding of the arts. He was interested in art, music and literature, not only in Catalonia but also in the world, and he was a sponsor and promoter of them.

In the midst of all this, he became acquainted with Antony Gaudí, his closest ally in life, and in order to develop his talents, he became his own sponsor and commissioned Gaudí to design the Colonia Güell and Parc Güell, starting with the Güell House. The relationship between Gaudi and Gaudí was not limited to that of a sponsor and an architect, but they also deepened their relationship in private and public life.

It is because of this great understanding and artists at the same time that we can see the Sagrada Familia and other great artistic buildings today.

Visit Date: May 2, 2015Enjoy the synonyms of Morocco.View of 'Ait Ben Haddou' from the hotel terraceこの日はアイト・ベン・ハッドゥ付近にある...

Local time: May 9, 2014The last day was sunny and today was the last and first short drive of the trip.Because we had al...

I'm going to Europe again this year without fail. As I've already told you, I'm going to Spain.Not that I forgot, but I ...