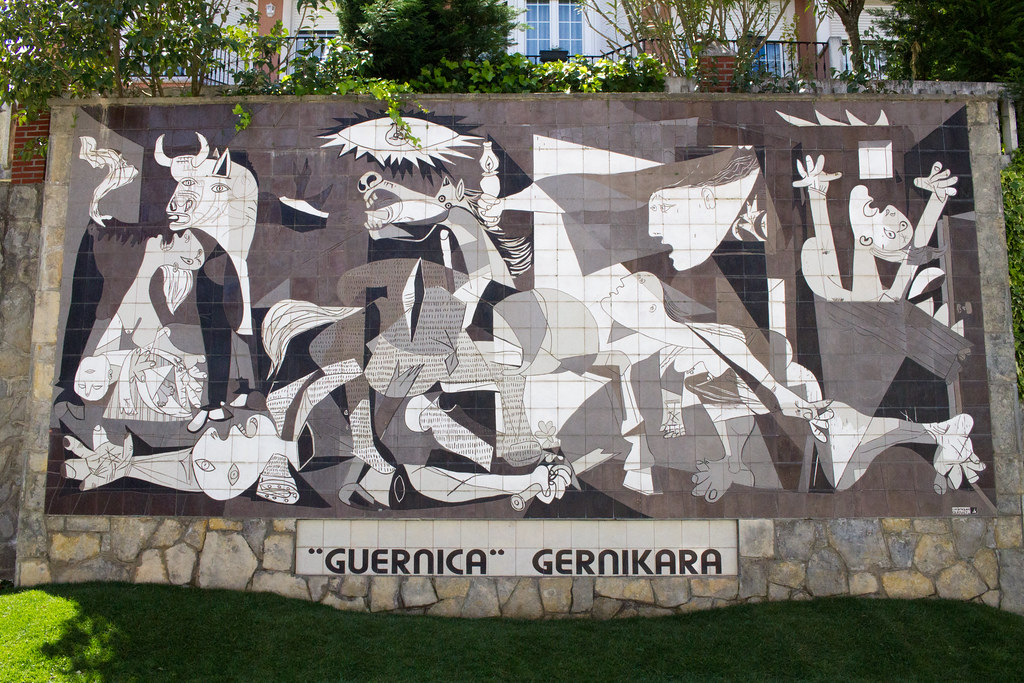 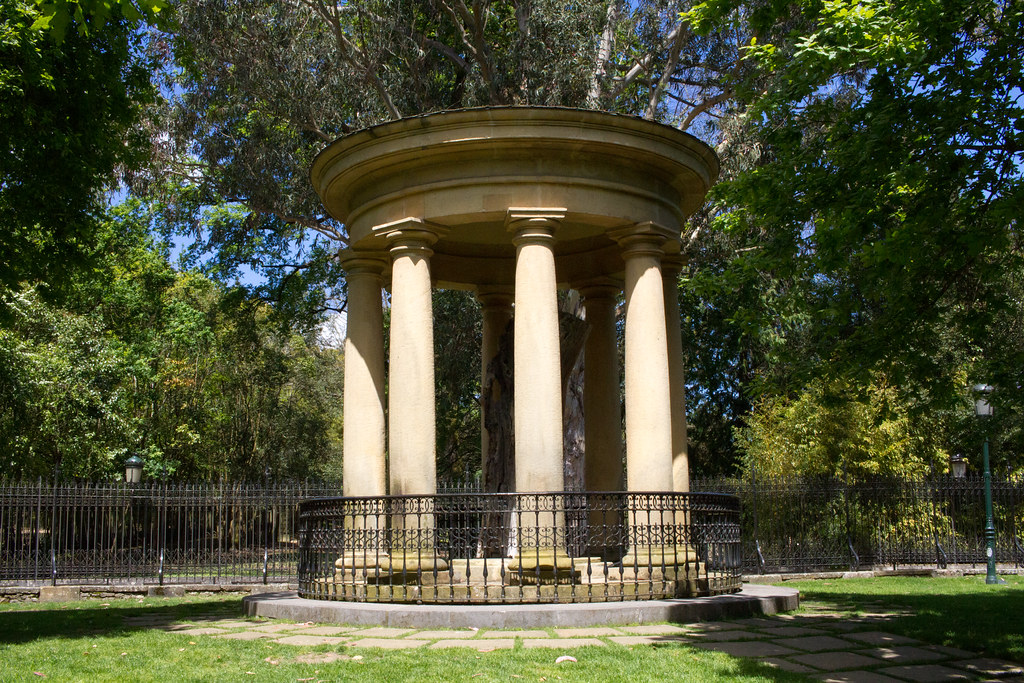 A long-awaited visit. To a small town in the Basque Country.

To the site of the Guernica.

« Guernica », I think there are few people who don’t know this word and the name of the place. Guernica » is a small town in Basque Country, Spain. On April 26, 1937, during the Spanish Civil War, this small village was attacked by Franco’s aerial bombing for the purpose of suppressing the rebels.

This was widely reported in Europe at the time, and was condemned by the international community in numerous ways. The famous Picasso work « Guernica » was painted as part of such condemnation and protest.

Guernica is located less than an hour’s drive east of Bilbao, the main city in the Basque Country. To get to the city, you need to get off the highway and then drive for about half an hour along the somewhat quirky and up and down roads, which you can see on Google Maps are very convoluted and have a lot of green areas.

In addition, there is a railway station in Guernica, so it may be easy to access from Bilbao. (I’m not sure because I’m traveling by car, so I didn’t check the information of this area.

And we arrived at the city in sunny weather. This trip to Spain, it was often unexpectedly cold, but this Basque region had high humidity and high temperature, so we could do sightseeing in short sleeves here. 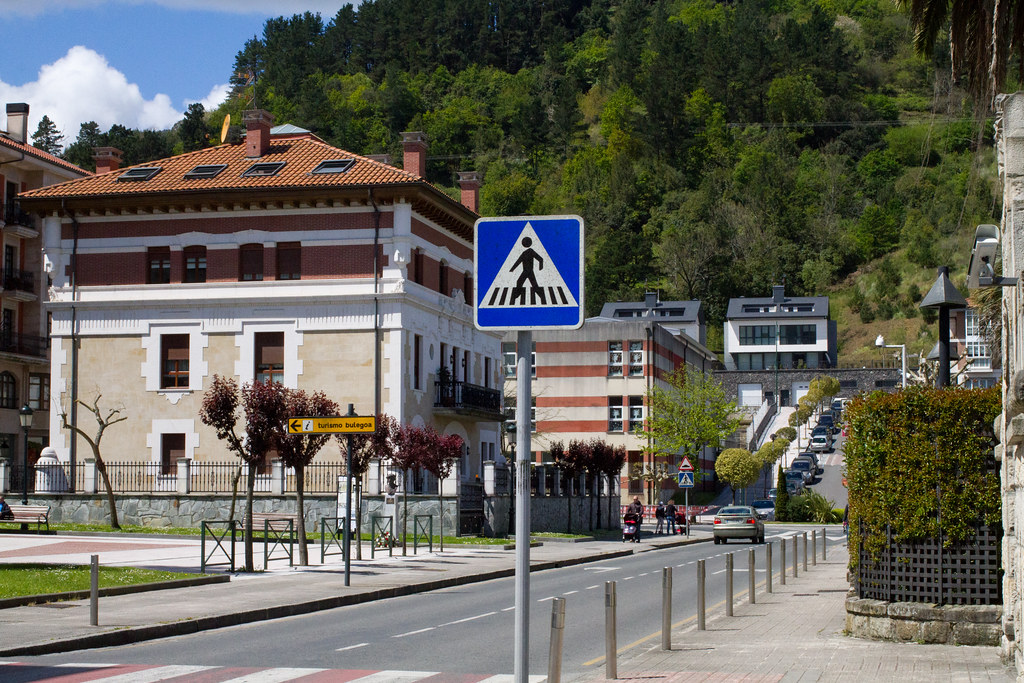 Parking was not particularly difficult as there was a large one not far from the town centre.

Guernica is a small town in the Basque Country, and because it was a holiday, there were few shops open, at most only restaurants. Even so, I had the impression that there were not many restaurants. It was a sunny afternoon, but the breeze was refreshing and it was very quiet.

Continue along the street where there is a lot of street parking to Huelos Square where the City Hall is located. 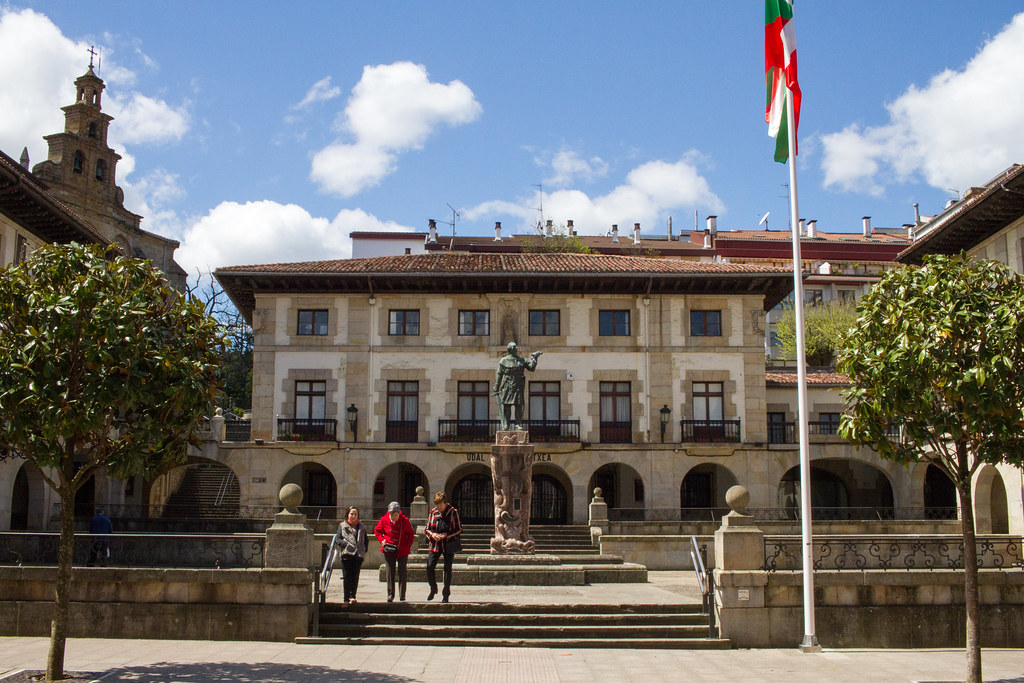 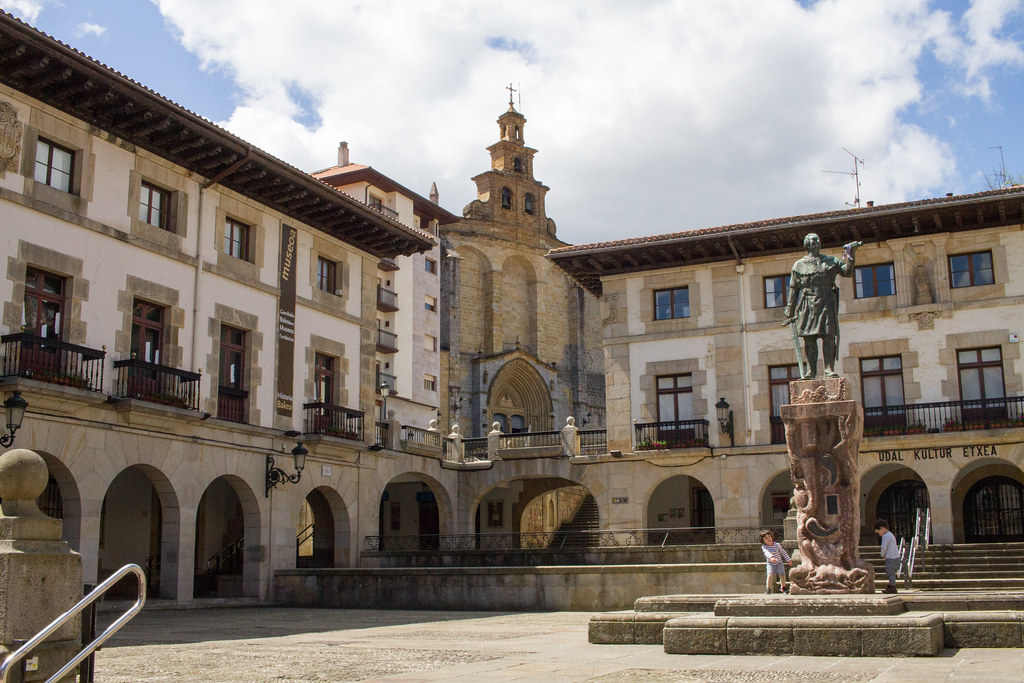 This is the city hall. Of course, it’s closed today because it’s a national holiday. However, it is a very natural scene in Europe or even in the world that the national flag is displayed as a matter of course. 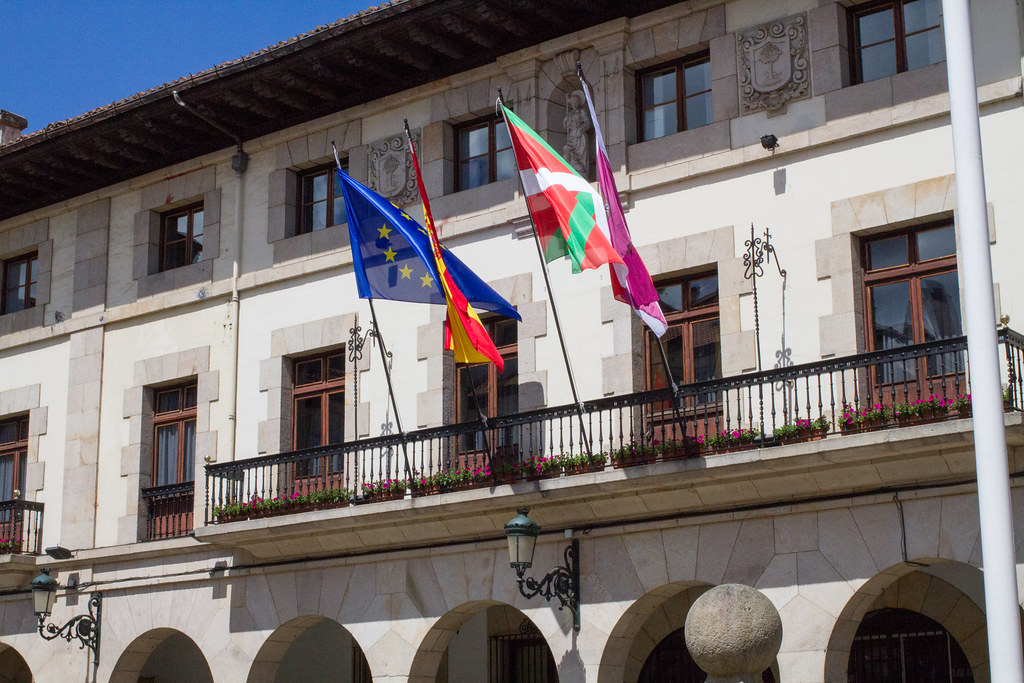 By the way, when we were leaving (after finishing sightseeing), we were hungry, so we had pintxos, which originated in this Basque region, at a bar (cafe). 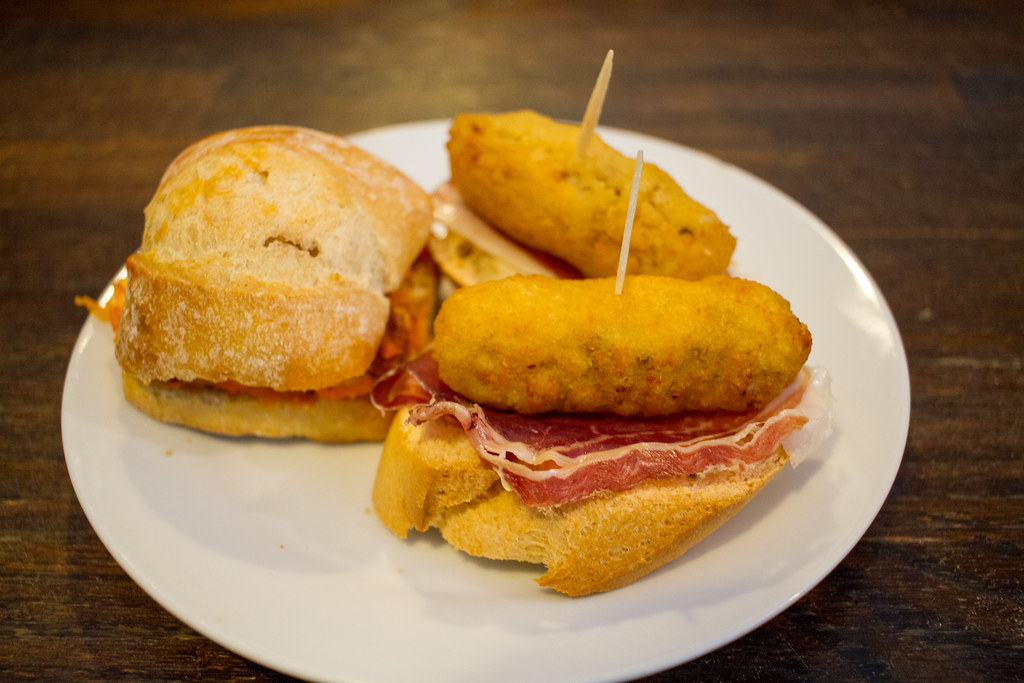 These are even better than they look! We’ve had pintxos at the Guggenheim Museum in Bilbao and they were great here too, and we’re really looking forward to San Sebastian, which we’ll be visiting in two days.

They seem to put a lot of effort into tourism.

Although it’s a small town, it’s famous all over the world and many tourists visit from all over the world. I could feel the atmosphere that they are putting a lot of effort into tourism. I don’t know how much importance they put on tourism.

I think there were many tourists. This is the map I got at the tourist information center in front of Huelos Square where the city hall is.

Despite its small size, Guernica has many museums, none of which are very large, but there are a few that are well worth a visit. We visited two of them, « Bizkaiko Batzar Nagusiak Juntas Generales de Bizkaia » (Bizkaiko Provincial Council) and « Euskal Herria museoa » (Euskal Herria Museum). However, it was before closing for siesta, so we had to rush sightseeing.

The first stop was the Vizcaya Provincial Council, which was free to enter, and after receiving a brochure at the entrance, we were free to explore. It was very crowded with tourists.

First of all, the most famous one here is this tree, which is a symbol of Basque, very famous. The one in the photo is the second generation « Guernica Tree », planted in 1700 and already dead, but it is carefully preserved in this way.

On the other hand, I inadvertently missed the current tree. No, actually, I should have seen it, but I didn’t recognize it when I saw it… I noticed its existence when I saw the pamphlet I was given at the site I was looking at to write this.

So I didn’t have any photos left of the current Guernica tree. It was crowded on a holiday (it was May Day), and it was packed with (from the word go, from Germany) group visitors. I was a bit disappointed. 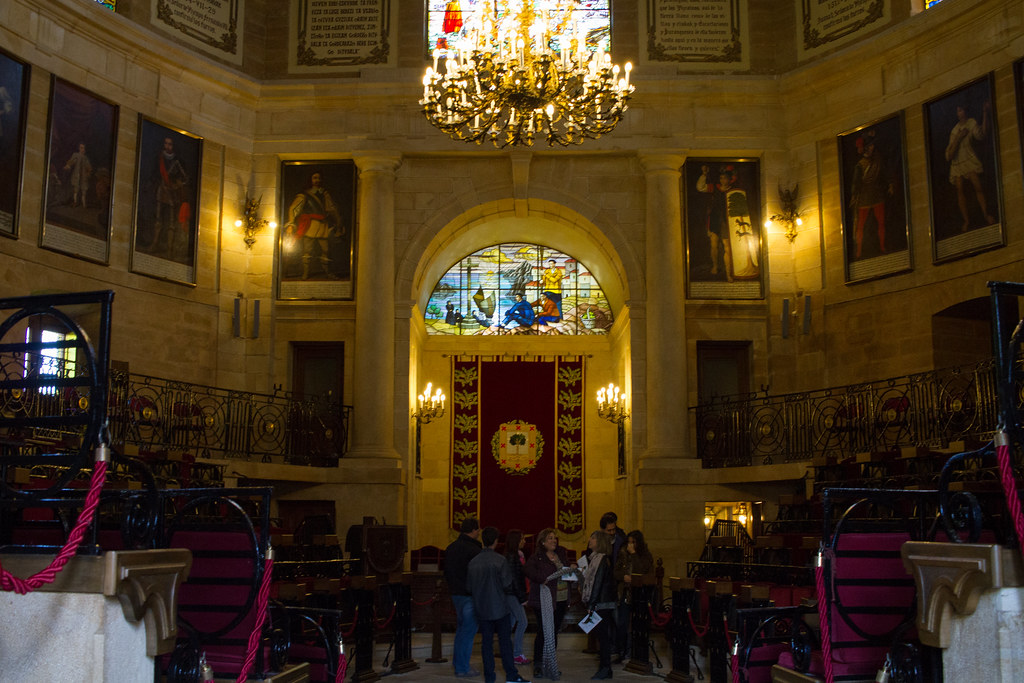 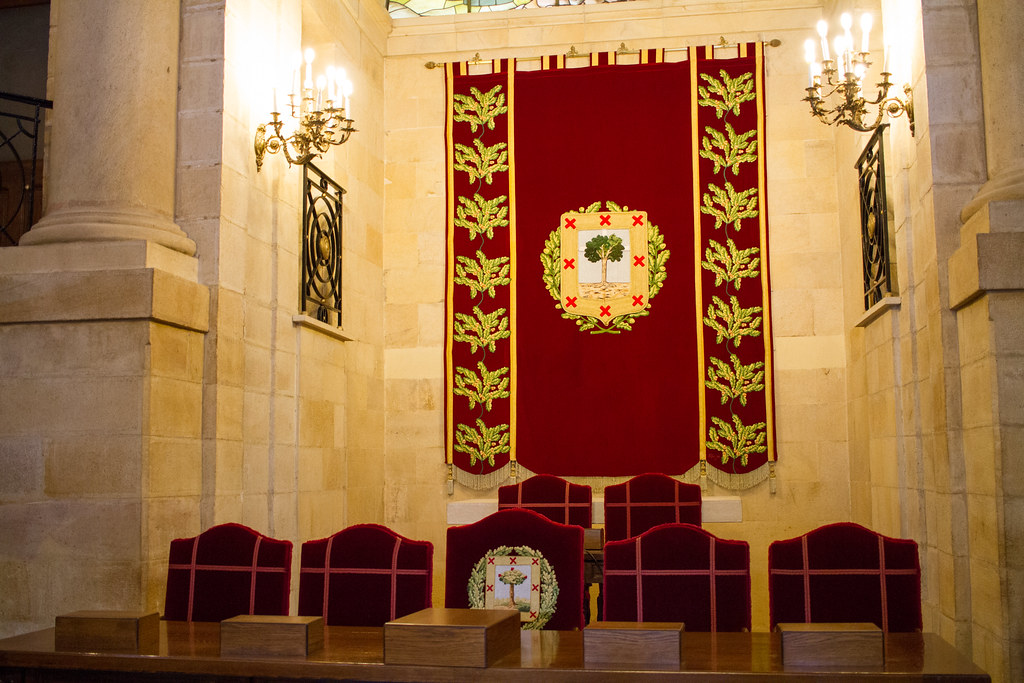 It is interesting to note that the provincial council is not located in Bilbao, the largest city in the province of Vizcaya. There is a very good reason for this. The reason is that Guernica is a very important city, a symbol of the Basque Country and its traditions. The origin of this prefectural council dates back to the Middle Ages. 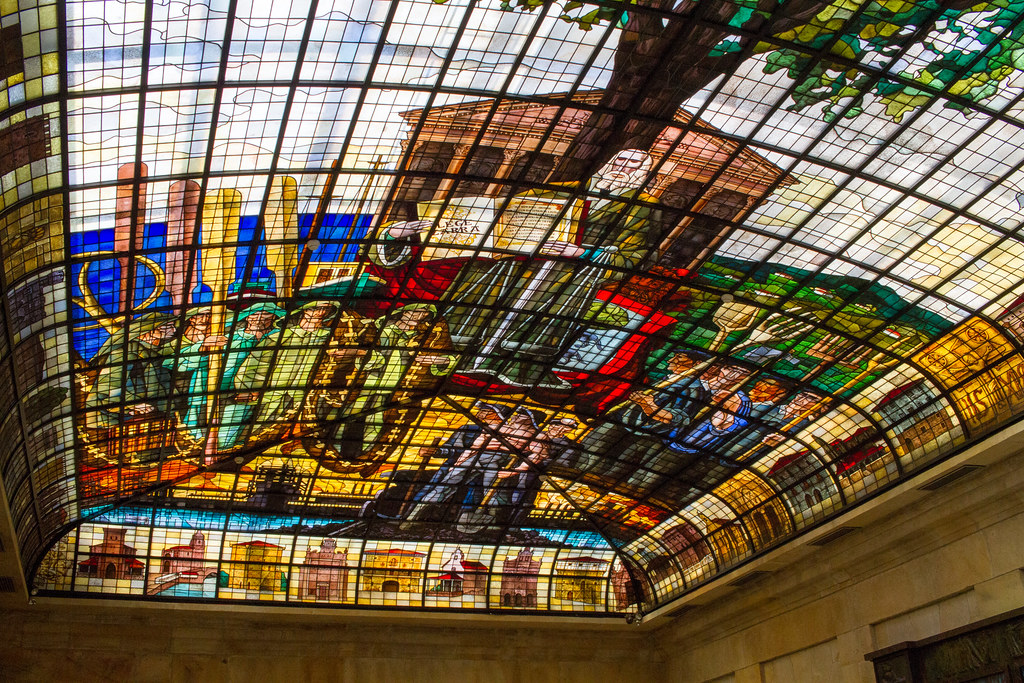 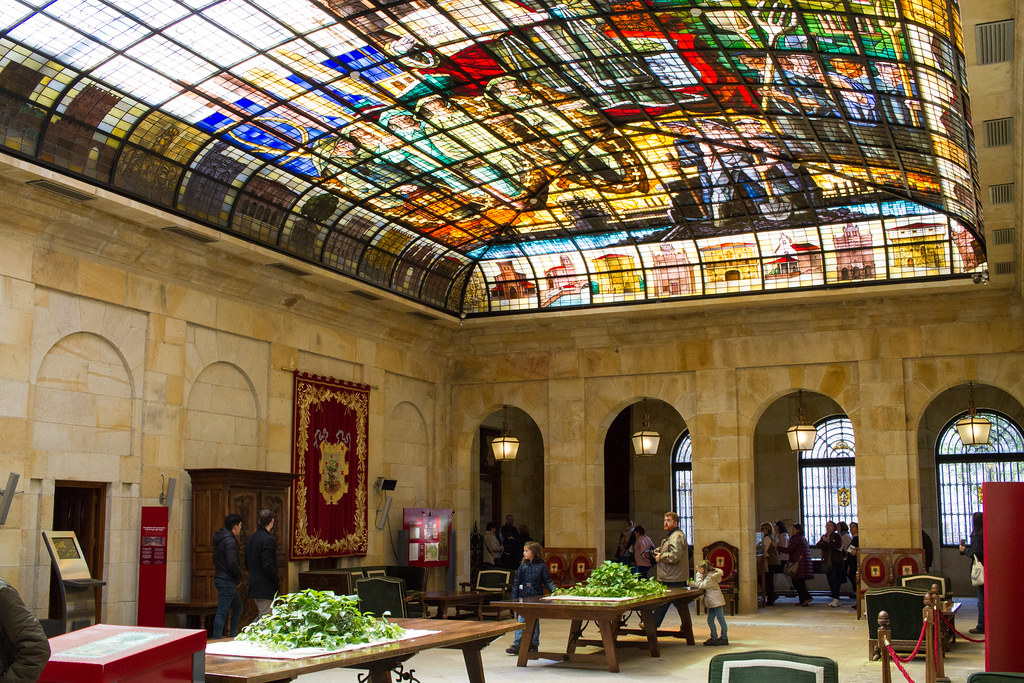 This stenglass was donated by a company in Bilbao in 1985.

Then we came to the Euskalt Elia Museum, right next to the Vizcaya Provincial Council, the ethnic museum of the Basque Country. Photography is not allowed here, so I can only introduce it with a pamphlet and a brief text. The siesta starts at 14:00 in the prefectural conference hall, but fortunately here the siesta starts at 14:30. So I was able to see the sights for a short time.

In the section of composers, there was an exhibition of Maurice Ravel. Of course, there were some composers other than Ravel, but I’m sorry, I don’t know them and I don’t remember them. In addition, we could listen to the samples of the music made by each composer with headphones. As for Ravel, I could listen to the orchestral version of « The Clown’s Morning Song ».

Not far from the street where the Euskal Elia Museum is located, there is a replica relief of Picasso’s Guernica. It would not be an exaggeration to say that it is one of the most famous landmarks in this city.

The size is actual size? No, I have an image that it was smaller than that.

By the way, the real one in the Queen Sofia Art Center in Madrid must have been forbidden to take photos. This might be the only place where you can take photos (laughs).

Considering what we had planned for the rest of the day, that was about it for our walk around Guernica. I returned to the central square and headed for the parking lot.

I think we need to revisit.

Anyway, this time, or always, I made a greedy schedule and arrived at Guernica at 13:00 (I couldn’t do any sightseeing during 2 hours because of siesta from 14:00 to 16:00). Siesta is really annoying in the countryside.

However, when we looked again at the brochures and maps we had acquired in the area, we realized that there were many places in Guernica, and nearby Bilbao, that we should have seen much more of.

For example, the Guernica Peace Museum, which was located in the first place we passed, Huelos Square. We couldn’t get in here either because of the siesta from 2pm to 4pm.

I think it is absolutely necessary to revisit. I’d like to re-arrange the sightseeing of San Sebastian which I’ll introduce later, and Cantabria which I introduced before. By the way, the main cause of the forced schedule was the small number of hotels in San Sebastián and the high price.

A little side trip to the Great Wall of Spain

After this, we were going to go to Vitoria, also in the Basque Country, but we took a little detour and went to the Church of San Juan de Gastelgache, which is about 20 minutes away from Guernica, for a spectacular view. I heard that it is also called the Great Wall of Spain floating on the sea because of its view.

However, this was a very popular spot and very crowded, and the parking lot was quite far from the island (bridge), so we had no choice but to only see the sights from the top of the cliff. 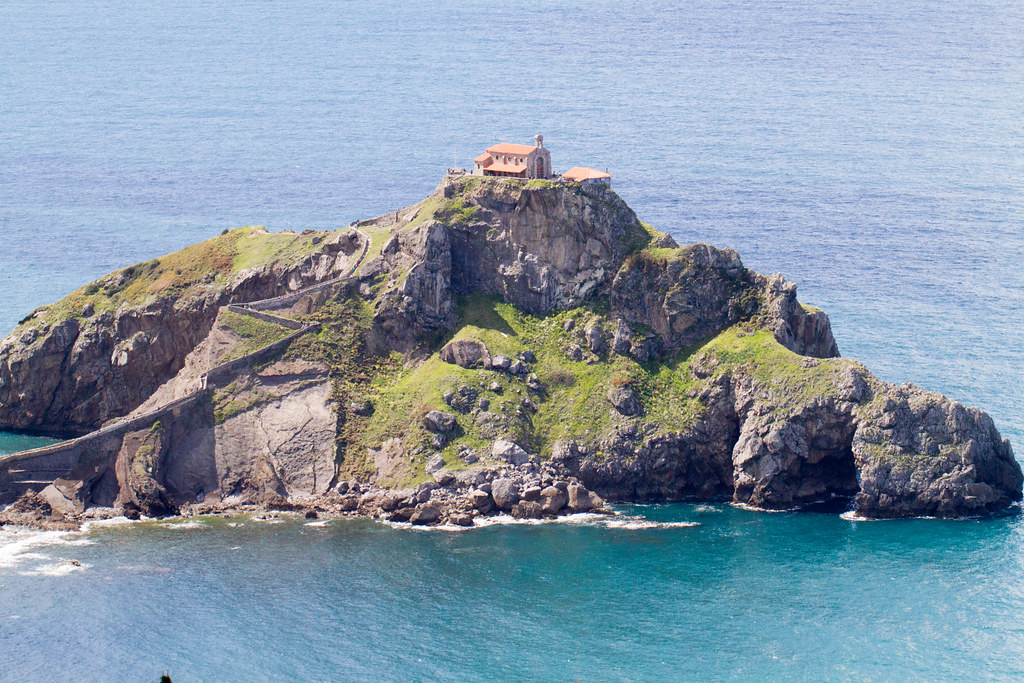 We parked the car in a remote place and walked to the church on this small island, because it would be late in the day. It’s not easy to make a schedule with enough time. I guess it’s because I’m greedy…

Date and Time of Visit: April 25, 2016 at approximately 7:00 p.m.この日最後の美しい村、そしてこの日の宿泊地となります。実は同日3つ目の村「モレッラ」を出発する前に、この日の宿...

No.8 Granada, Baeza, Ubeda and Cordoba: 2008 Spain and Portugal