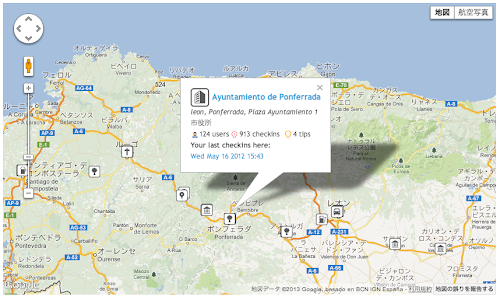 Well, on the 15th, which was the best weather, the last place we visited and where we stayed for the day was Ponferrada. It’s about 30 minutes away from Astorga.

It is the base of the pilgrimage route to Santiago de Compostela, but the scale of the city is that of a European provincial city.

We chose a hotel facing the central square of the old town. As the timing was right, the parking lot was also located under this square, so the check-in was very smooth.

Now it was the next day after recovering from the fatigue. We started the day with a walk around the city, which of course we hadn’t seen yet. On the square is the magnificent City Hall. The pilgrims were moving in about the same direction, so I decided to follow them. Apparently, there is a magnificent castle in this city. The back here is the exit of the city in the order of the pilgrimage route. A splendid castle. Incidentally, there is a theory that the name « Ponferrada » is derived from « Pons Ferrata » which means « strong bridge » or « iron bridge ».

View of the city from the exit side.

Back to the square again and to the parking lot. The travelogue of Russia is still continuing. I'm sorry for the length of stay is only 3 days.The last day is rainy. We ...

I'm going to start writing my GW travelogue little by little this time. This time, instead of writing in chronological o...

47 places to visit – The most beautiful villages in France 2011

With yesterday's "Rodemack", this year's GW 2011 series on the most beautiful villages in France is finally complete and...
I went to a chocolate exhibition.
CrashPlan Then I realized I was 100% backed up.
Page d’accueil
2012 Spain and France
タイトルとURLをコピーしました