This was our second visit to San Ginegio, just 30 minutes away from Sarnano, our first stop of the day. The weather was cloudy when we arrived. The parking lot is located outside the village walls. It was large and very easy to park. We were the only car in the lot.

The location is in the south of the Marche region, in the mountains.

The village itself was a very beautiful place with a strong medieval atmosphere. There are many churches, from a big one in the center of the village to an old one from around the 12th century and a Baroque one, which is typical of the most beautiful villages in Italy, but I still felt that this one was quite large. 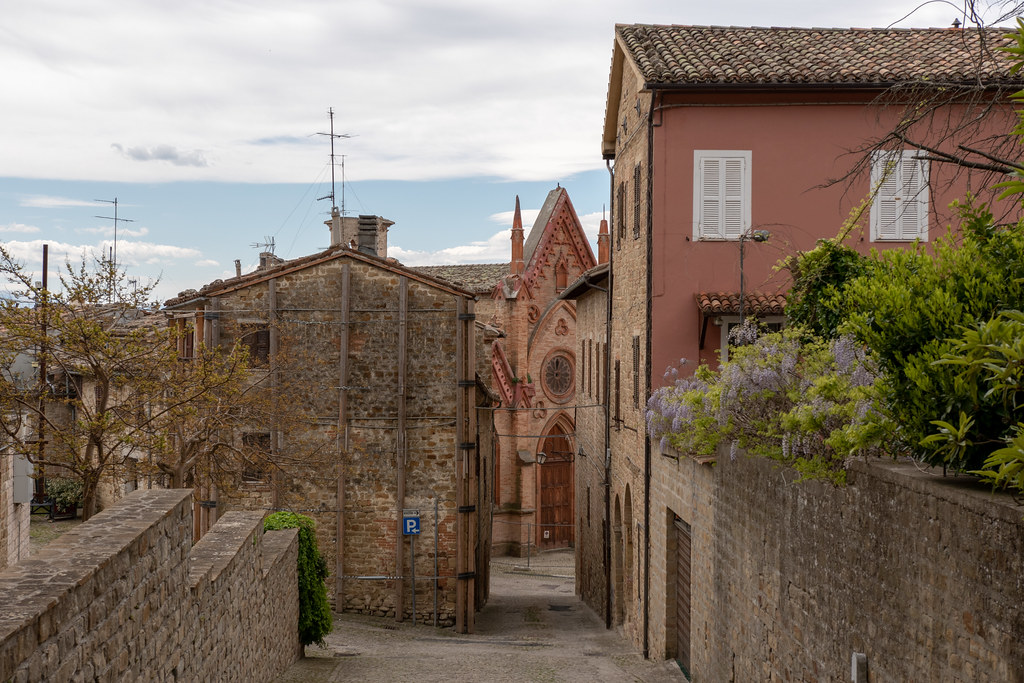 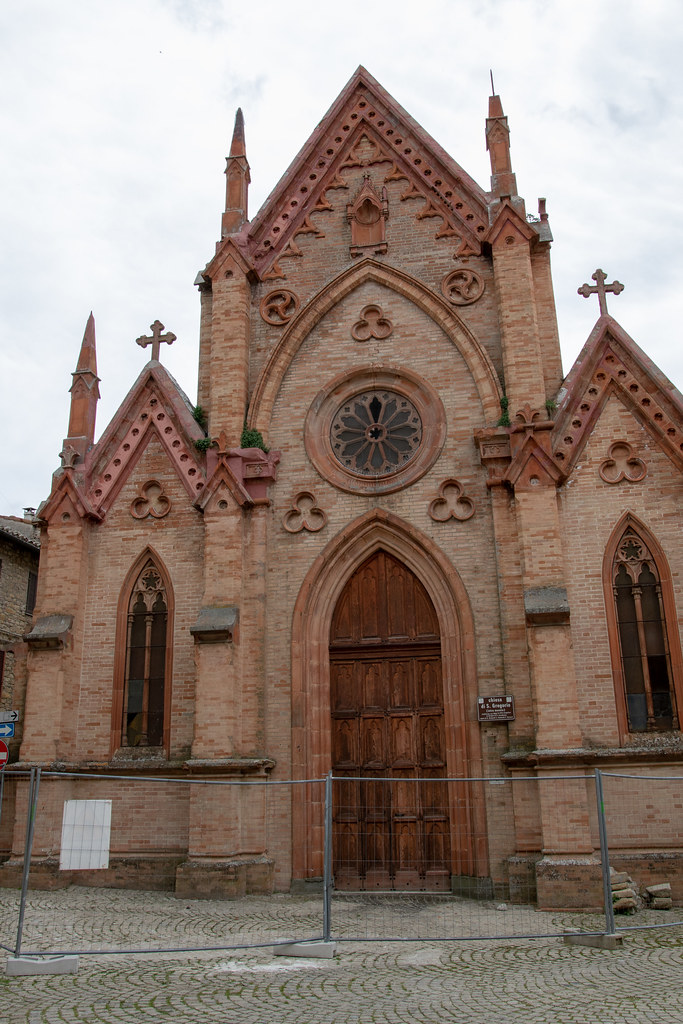 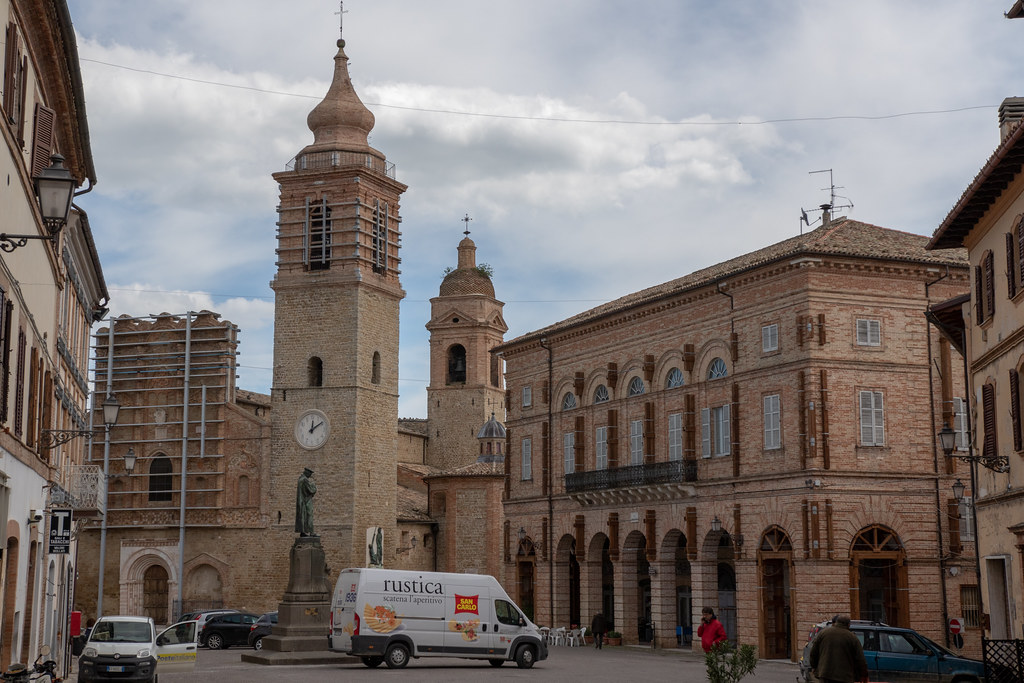 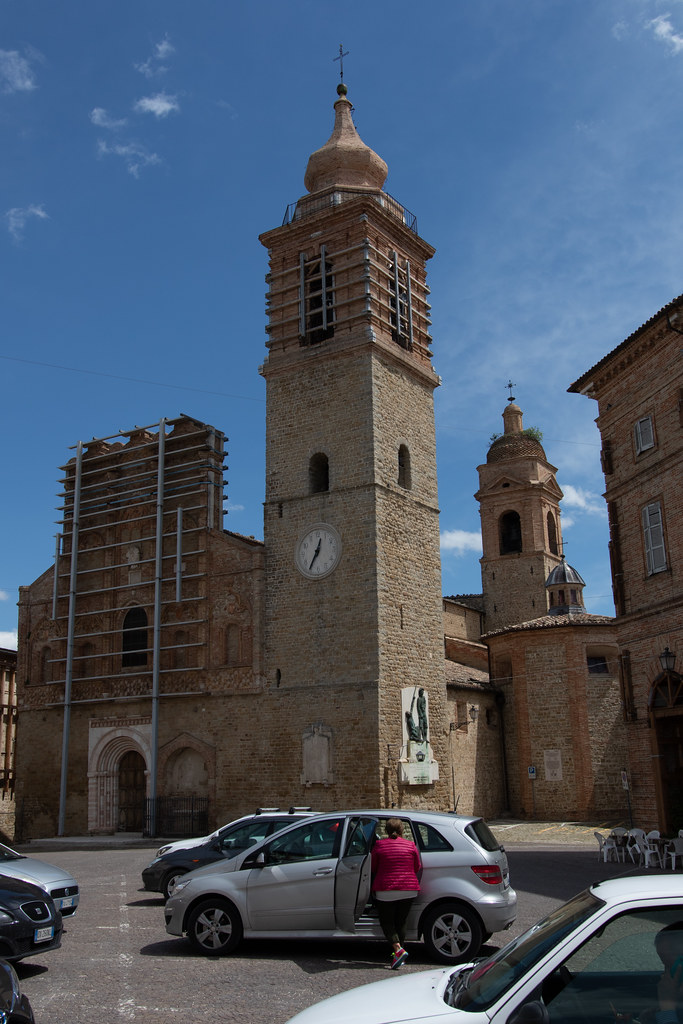 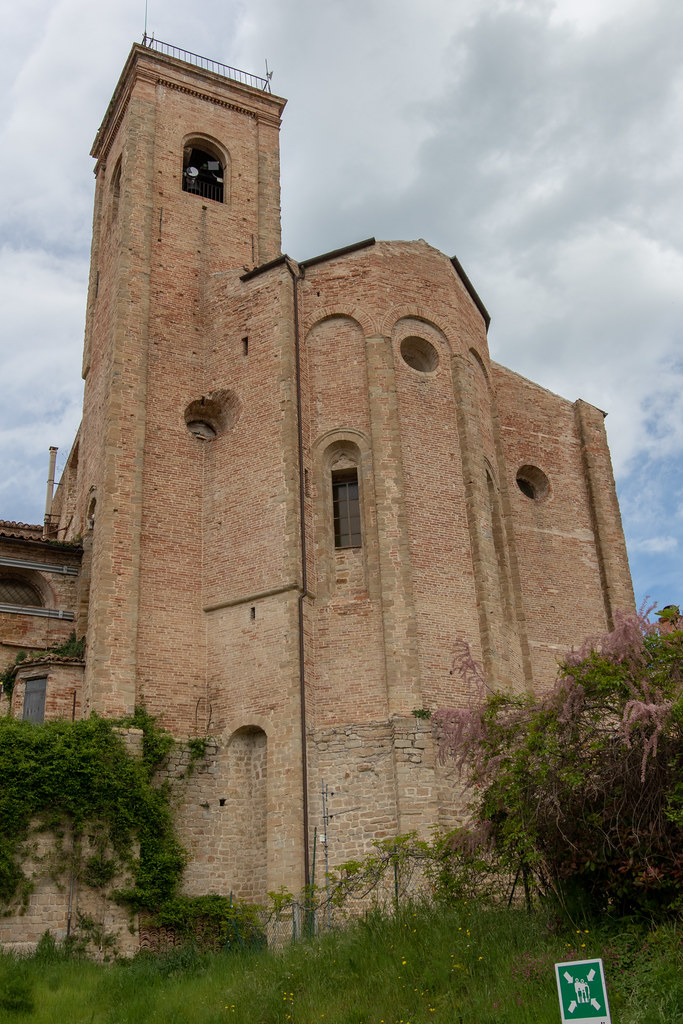 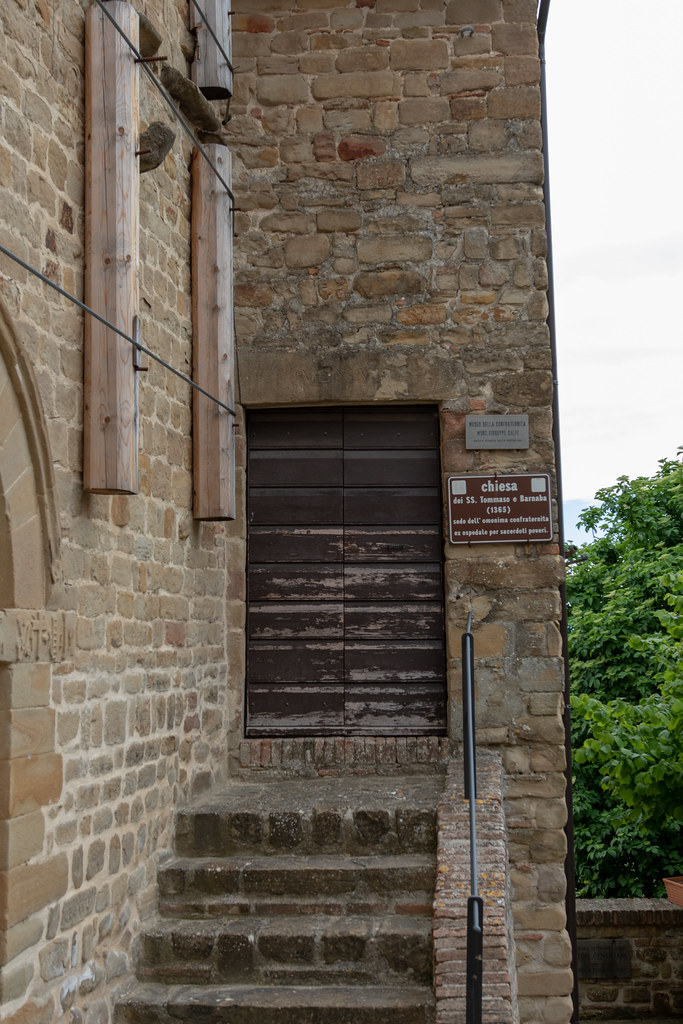 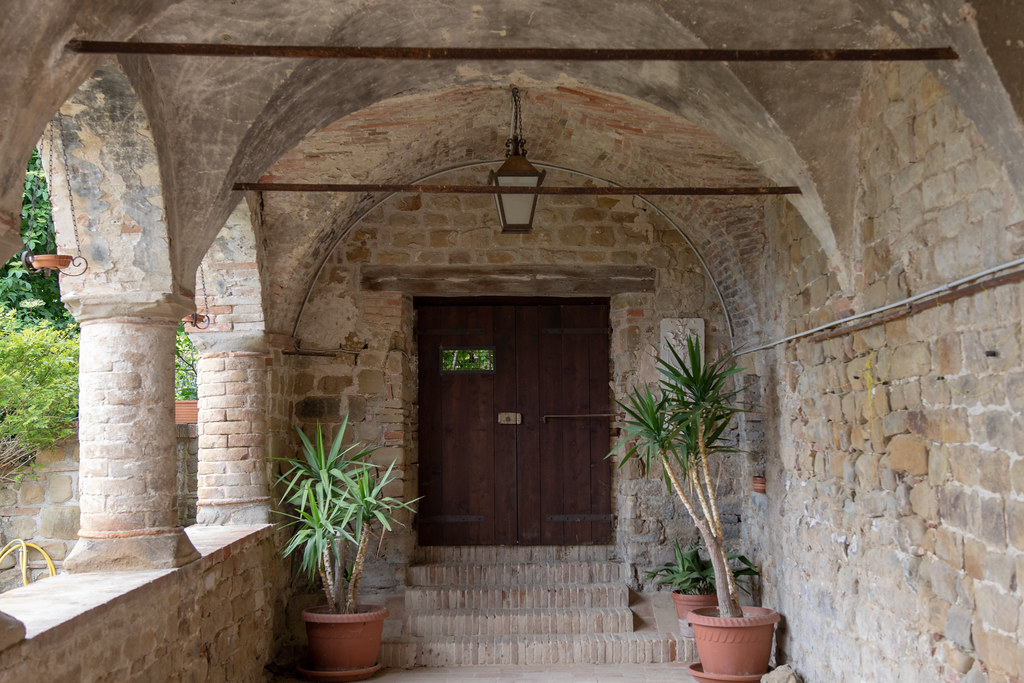 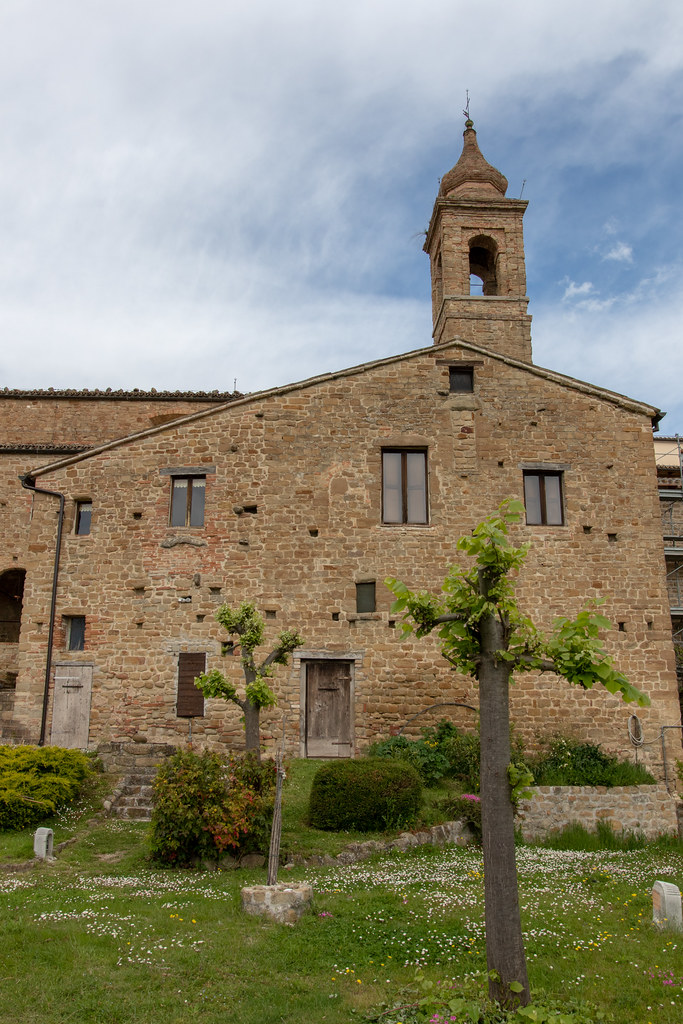 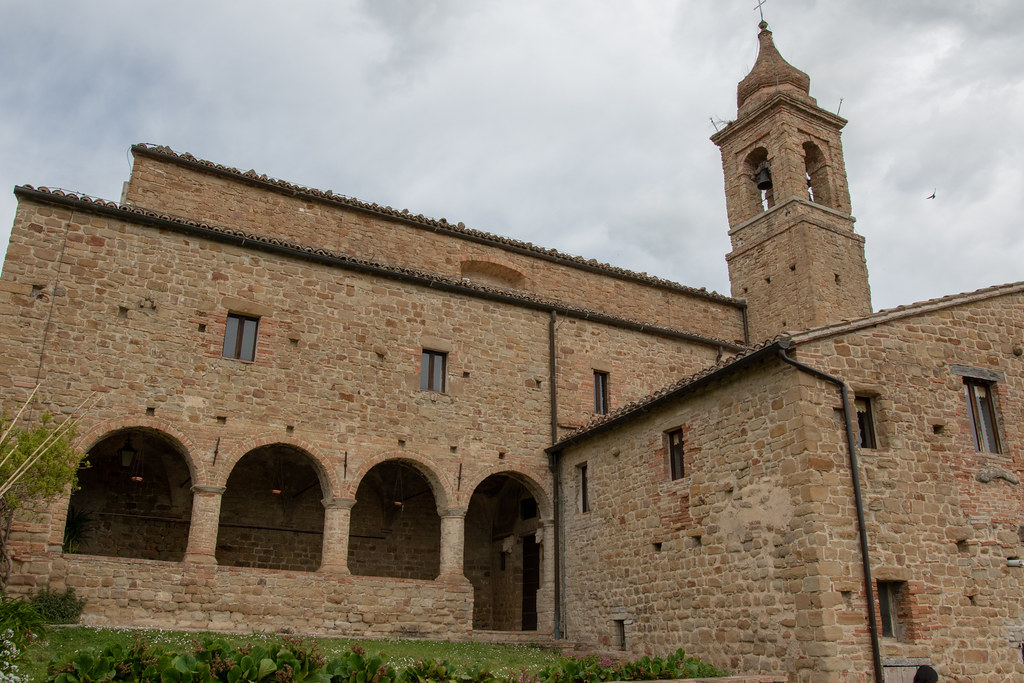 But to our great regret, we were not able to visit the inside of these churches. But there is a big reason for that. The earthquake.

Many of you may remember that on August 24, 2016, a massive earthquake struck the central region of Italy. This 2016 earthquake in central Italy, the epicenter was in Umbria, next to the Marche region, but parts of the central and southern inland areas of this Marche region were also severely damaged.

Indeed, in Materica, where we stayed the day before, there were many buildings that were being restored. The church in the square in Sarnano, which we visited first, was also under restoration and we couldn’t go inside.

But here in San Ginegeo, the damage was especially noticeable. As you can see, this kind of reinforcement was scattered all over the village. 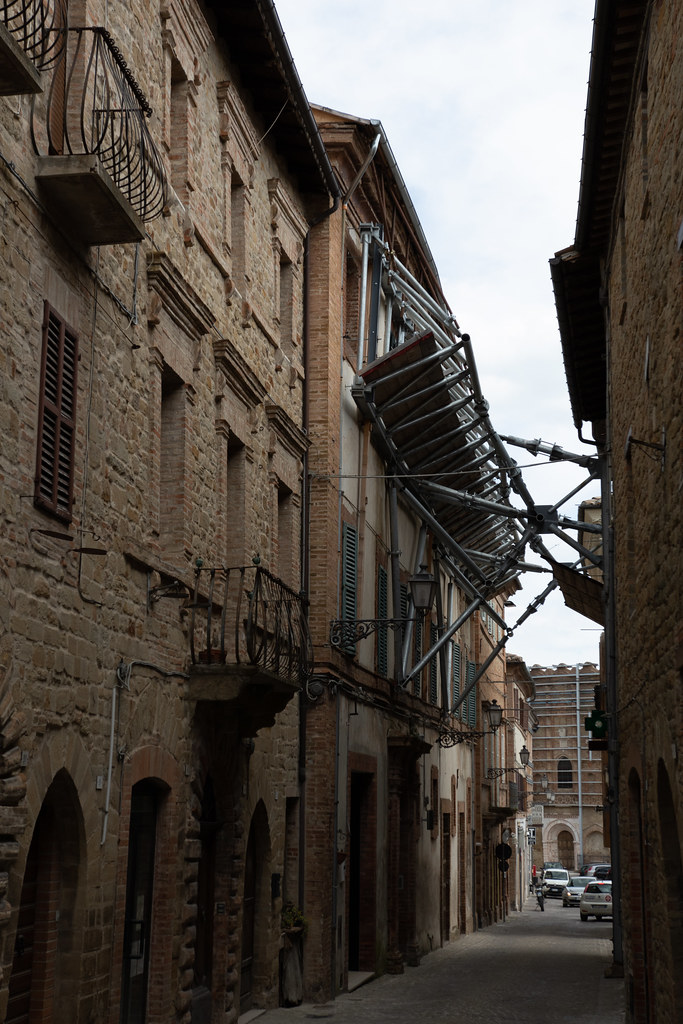 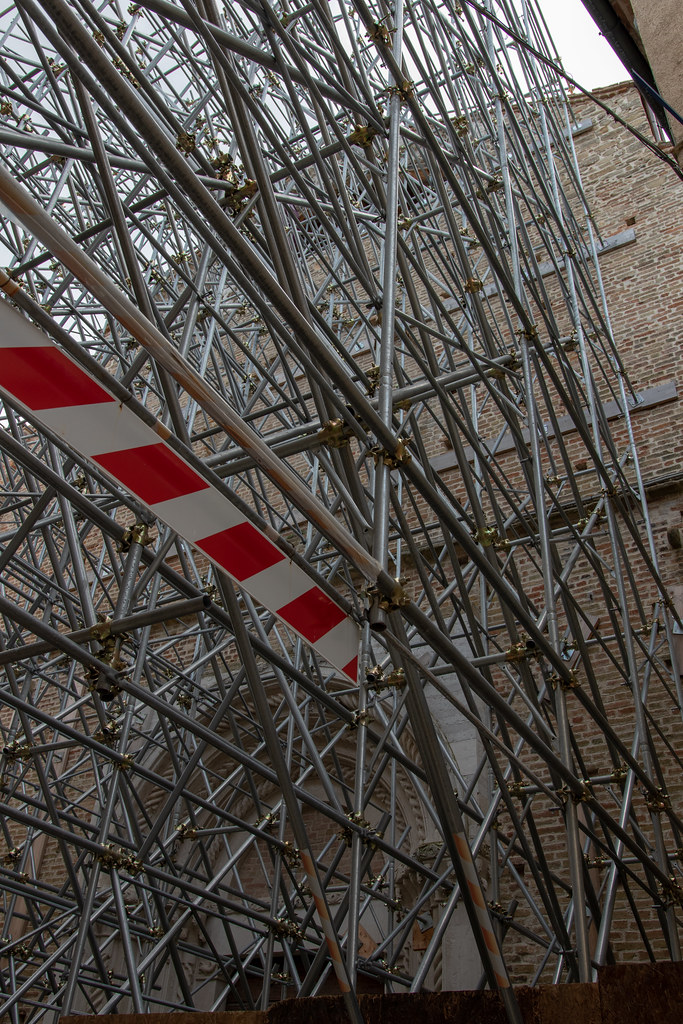 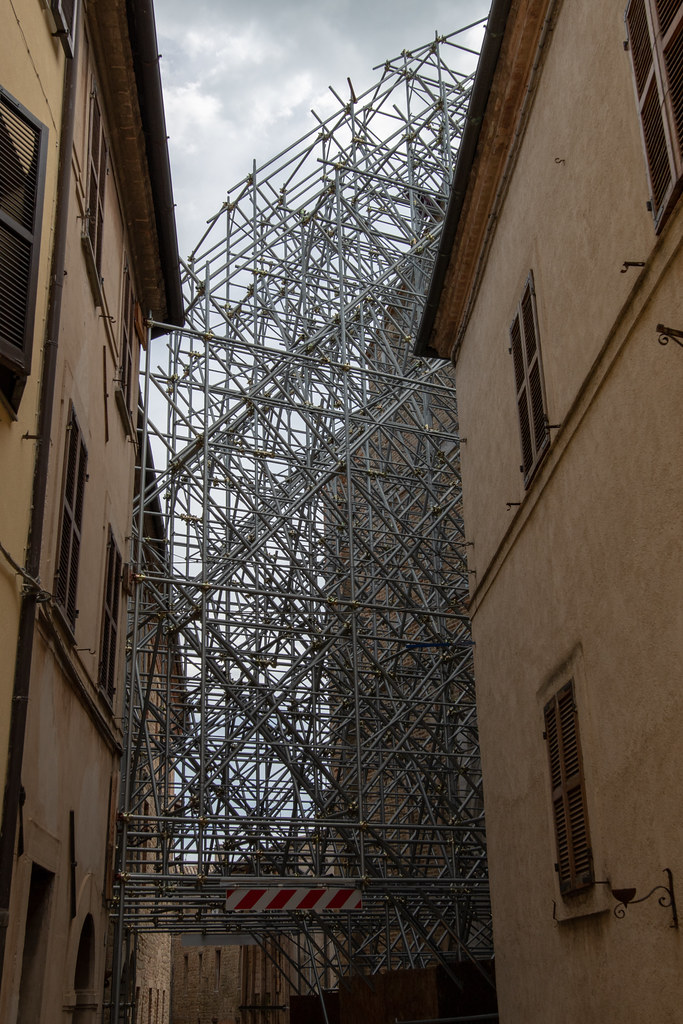 The restoration was so conspicuous that I spoke to the owner of a cafe in the village while taking a break. « I asked him, « Are these repairs caused by the earthquake three years ago? I asked. But he didn’t speak English. And I don’t speak Italian. So, I said « Ce reconstruction est influencé par le trimbalement de tarre il y a trois ans? » while pointing to the church under restoration in front of me. The owner said he could understand a little French. The words are similar, aren’t they?

Even though it’s been three years. I can’t imagine how to fix such an old building.

In addition, the boundary of the central square, the interior seems to have been so beautiful. It is a pity.

Nevertheless, the city of San Ginegeo was very pleasant and a wonderful place with beautiful streets still existing. 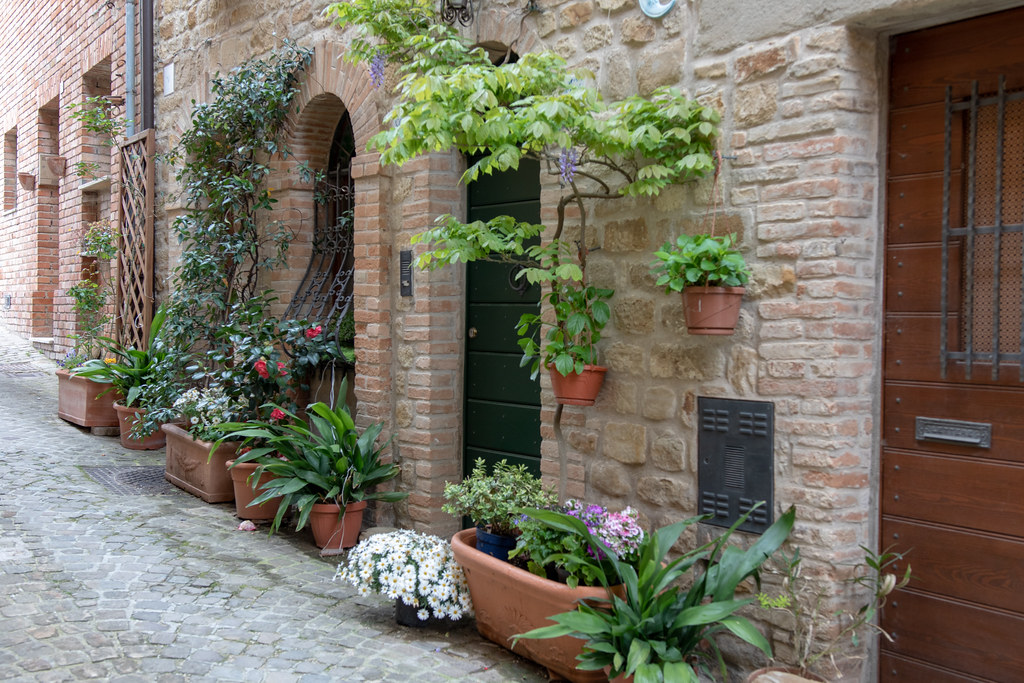 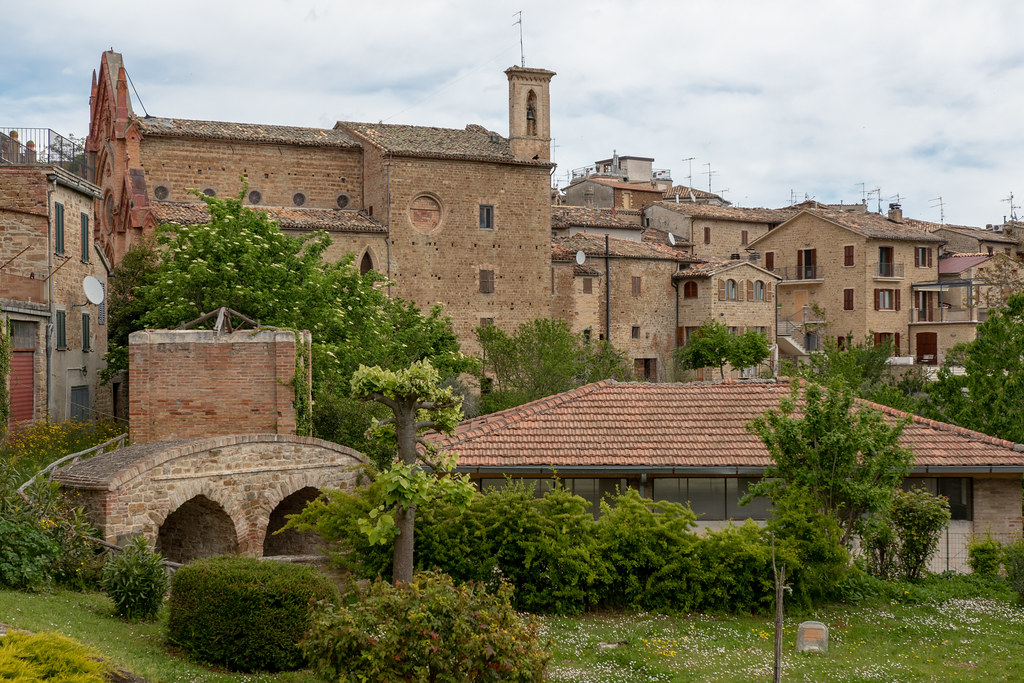 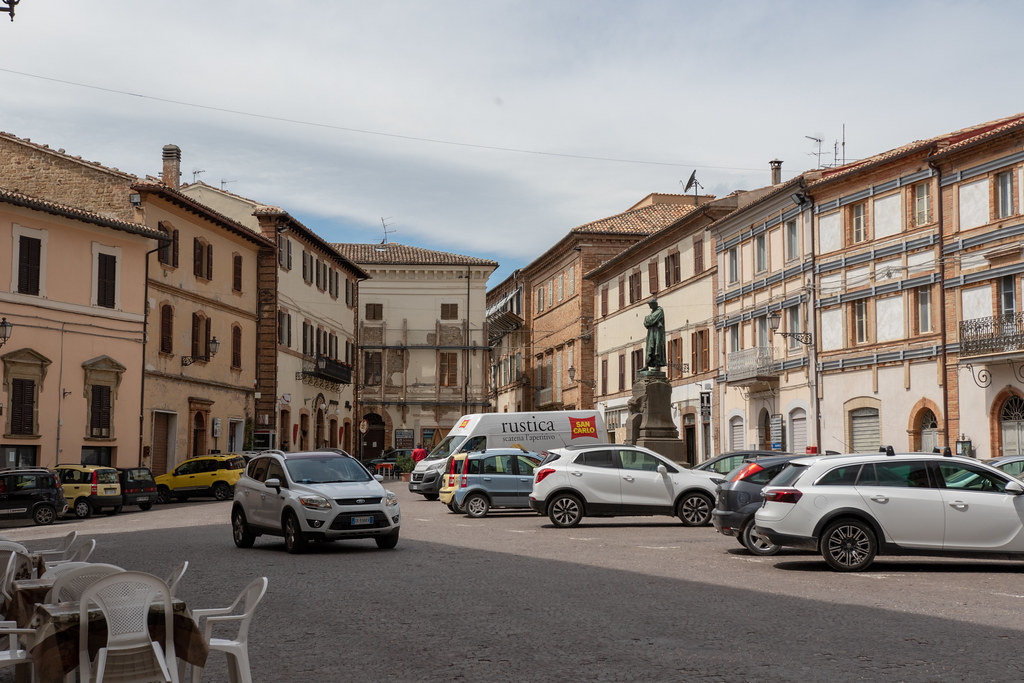 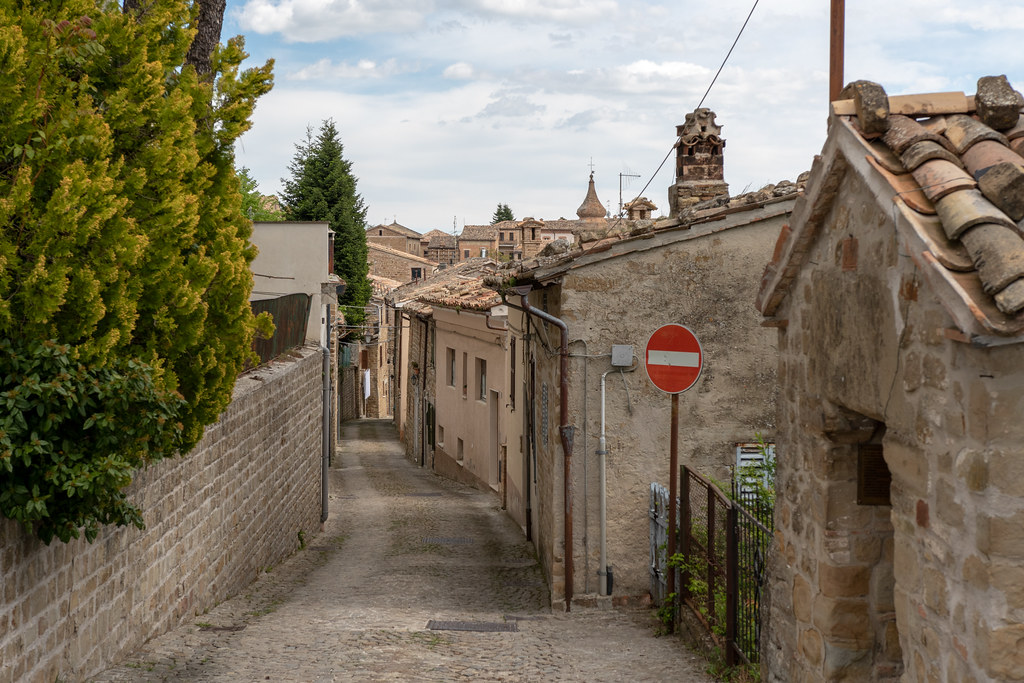 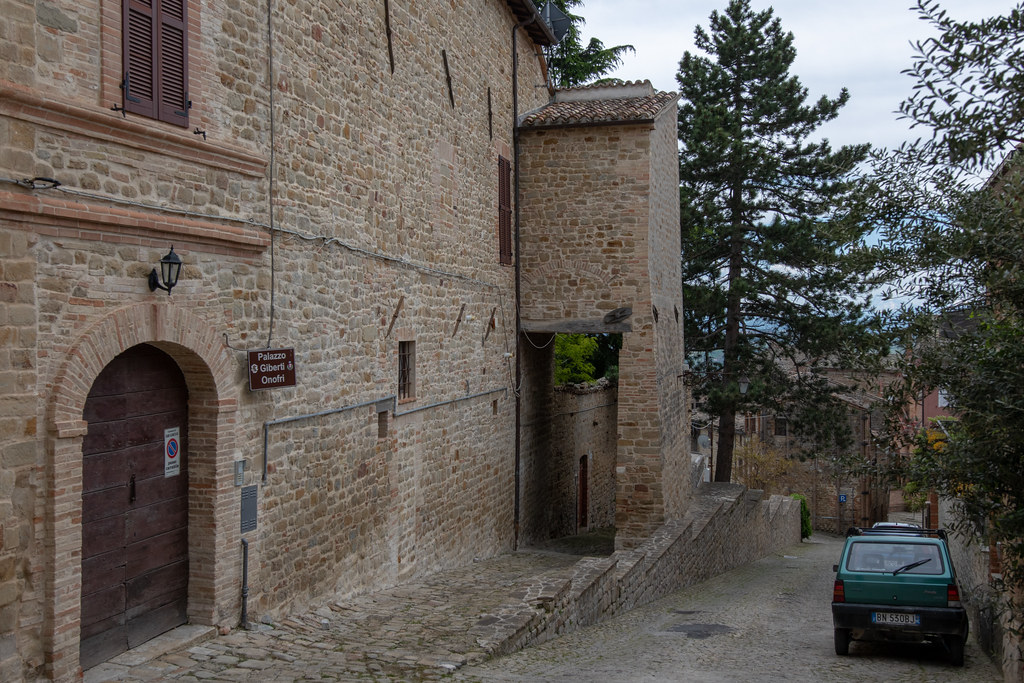 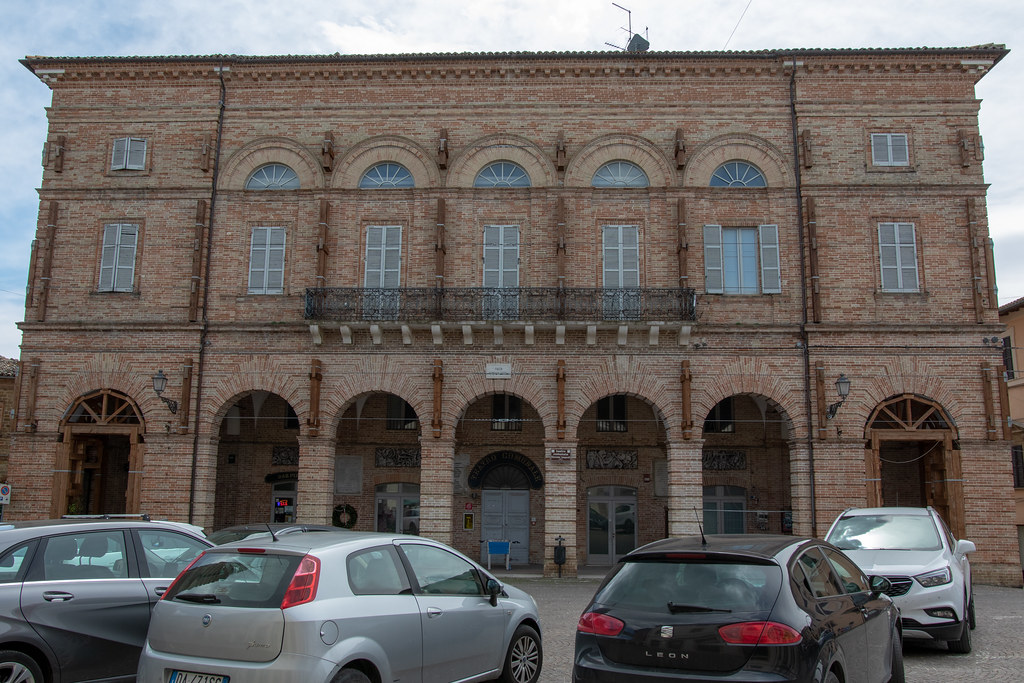 Saint-Ursanne, the most beautiful village in Switzerland No.18 ★★☆☆☆

Lompret – Tour of the most beautiful Walloon villages No.5 -★★★★☆

Lichtensteig (Lichtensteig) Tour of the most beautiful villages in Switzerland No.25 ★★☆☆☆☆