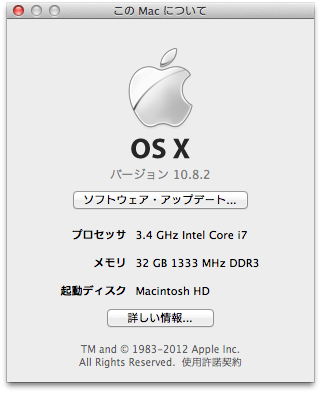 So I bought two of these to make it 32GB!

I bought two of these. I spent a lot of money again.

The way to do it is exactly the same as when I changed to 16GB before.

But still, memory is getting cheaper and cheaper. Even though it is not yet two years, I was surprised that the memory of 8GB x 2 is the price which is close to the memory of 4GB x 2 (although it says, the difference of almost 2,000 Yen).

Fortunately, I’ve been playing with Hadoop and Mahout for a while now, so I increased the heap size as much as I could and tried to run it. 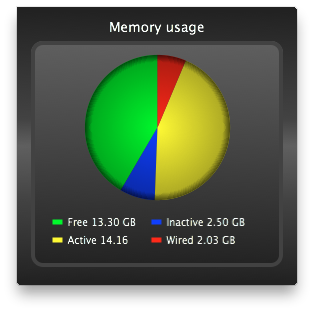 I’m using all this memory and I still have room to spare!

(There is no point in using hadoop on a single PC with such high specs, though…)

Now I’m back with Amazon Kindle for Mac. After using it, I realized that it’s different.

What's with this useless motivation from last week (laughs)?Now I've installed Amazon Kindle for Mac. It's an app that's...

I tried to make a calendar with iPhoto and it was better than I expected.

I made a little trial calendar in iPhoto the other day, and it turned out better than I expected!It's in a container lik...

It's a Mac story every day, but this time I installed a flickr client. By the way, I forgot about it, but it seems to ex...

What I felt in the news related to Mountain Lion – The speed of direct information gathering by RSS, which is different from twitter

iMac has come to our house ♪( ´▽▽)

I found myself becoming an apple believer, and my desktop PC finally became a Mac!It is the iMac which changed the model...
Kyoto Marathon 2013 I decided the pace allocation #Kyoto Marathon
Frippan, it’s finally here… but it seems like a hype (lie) that it’ll be delivered the next month or 7.
Page d’accueil
Apple
タイトルとURLをコピーしました