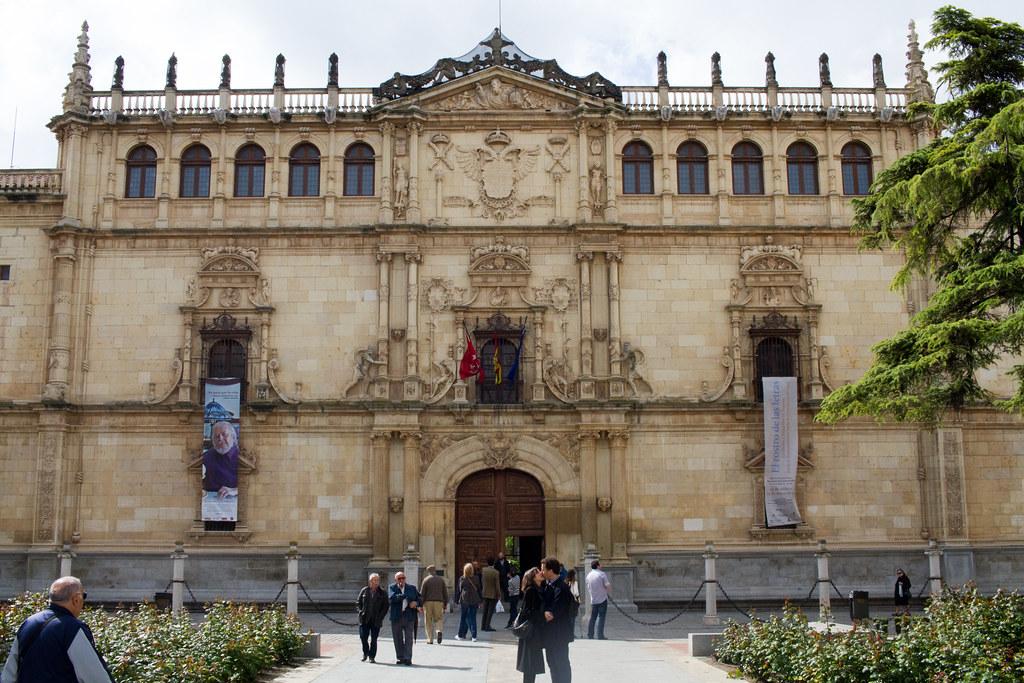 This is the last issue. It was a quick tour of the world heritage sites.

Last stop on this trip.

It is finally the last day. We will fly back to Japan via Dubai at 3:00 p.m. on this day. The last stop on this trip is a city called « Alcalá de Henares ». It’s about 50 minutes away from Sigüenza, where we stayed the night before, and about 30 minutes away from Madrid Barajas Airport. The location of the city is as follows.

We had originally hoped to arrive before 10:00, but we were taking it easier in Siguença than we thought, so we left late and arrived late.

Cervantes’ hometown with its old university

This city is the hometown of Cervantes, the famous author of Don Quixote, and the central square of the city is named Cervantes Square. It was hard to find a public parking lot, but we were lucky to find a street parking along this square. 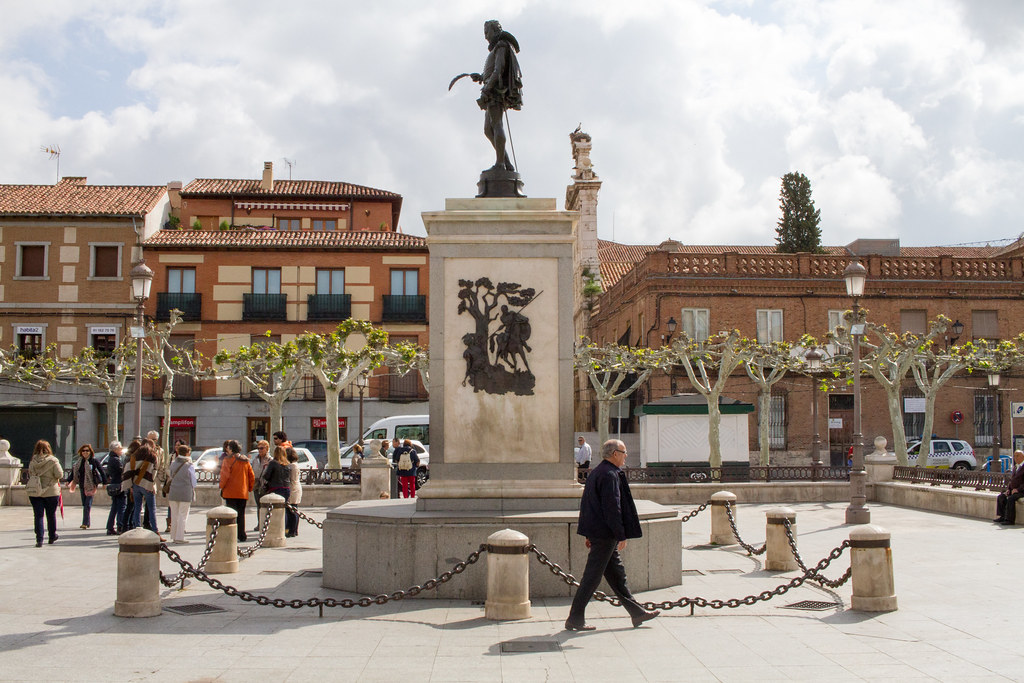 Of course it was parallel parking, but it was good that there was enough space. I don’t have impression that parallel parking in Spain is so tightly packed compared with Italy and France. I wonder if it’s because the city is wide and the country is wide. (Italy is big, but France is big…) 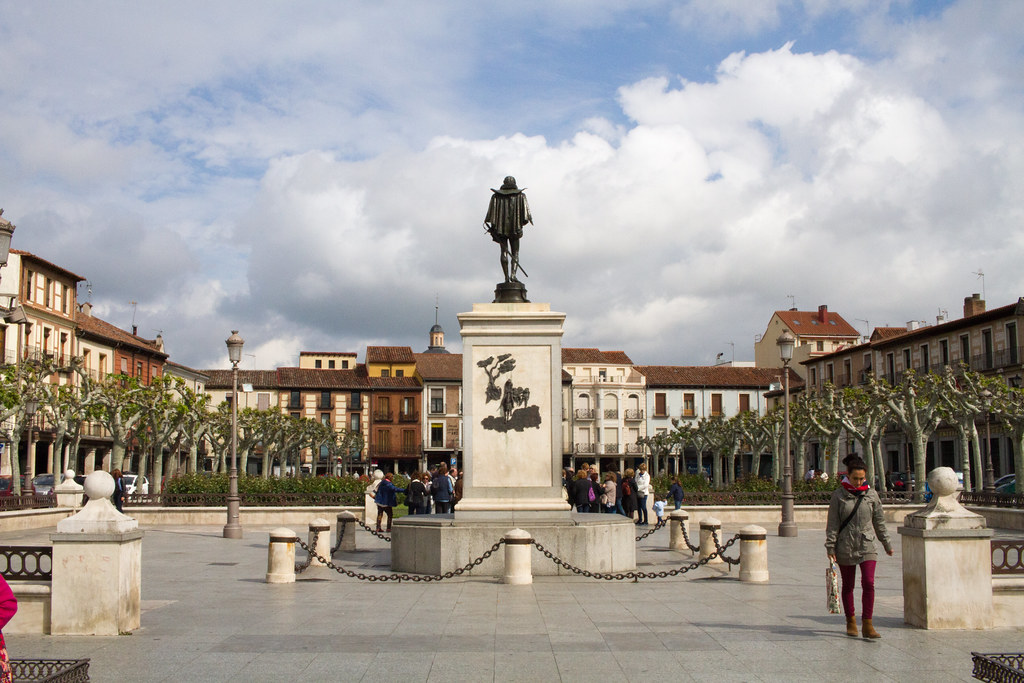 Application for the Alcalá University Tour

You can visit the University of Alcalá with a guided tour. However, we arrived late, it was unexpectedly far from the highway, and even after we arrived, we had to join the tour at 12:00 instead of 11:00.

The left side is the ticket and the right side is the sticker, and the participants of the guided tour should put this sticker on their chest or other visible place.

The quaint streets of the ancient city

So, we had no choice but to walk around the city a bit and then kill some time until the tour started at 12:00. 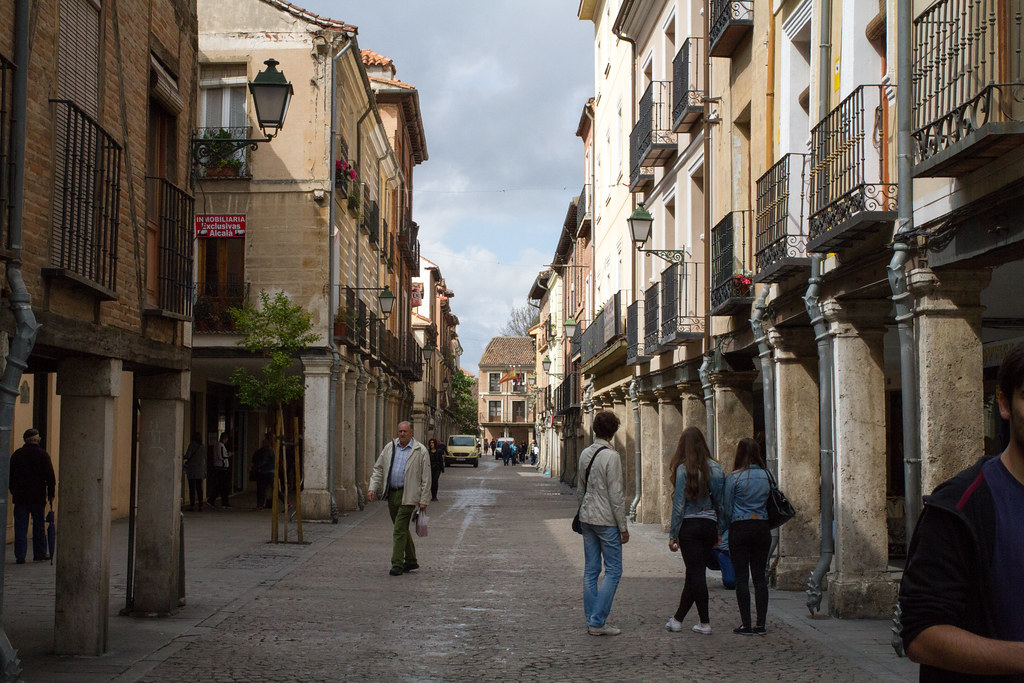 The city of Alcalá de Henares is also an ancient city, and the streets were very quaint. Just walking around is fun enough. There must be a lot of tourists from Madrid, I felt that there were relatively many shops for the size of the city, mainly souvenir shops and restaurants. 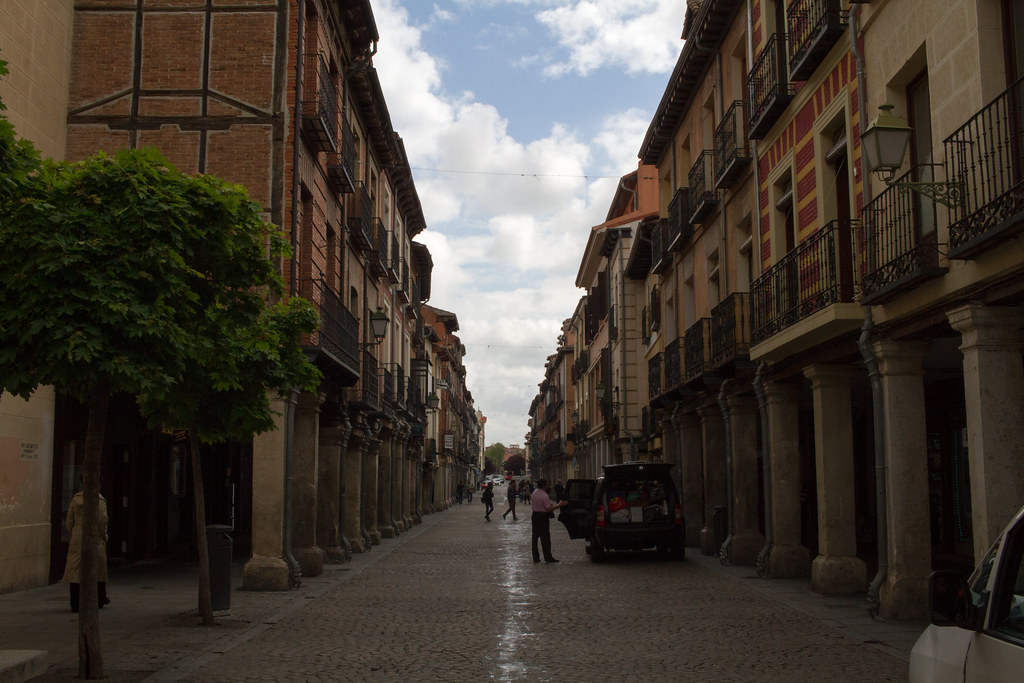 Now, this Cervantes was also a naval soldier. He participated in the Battle of Lepanto, which was fought between Turkey and Spain over the supremacy of the Mediterranean Sea, as a naval officer. Coincidentally, it was written in a book of Spanish history that I read on the airplane on the way back.

In addition, the house of Cervantes is located along the main street of the city. It was crowded with tourists. In addition, we only saw from the outside. 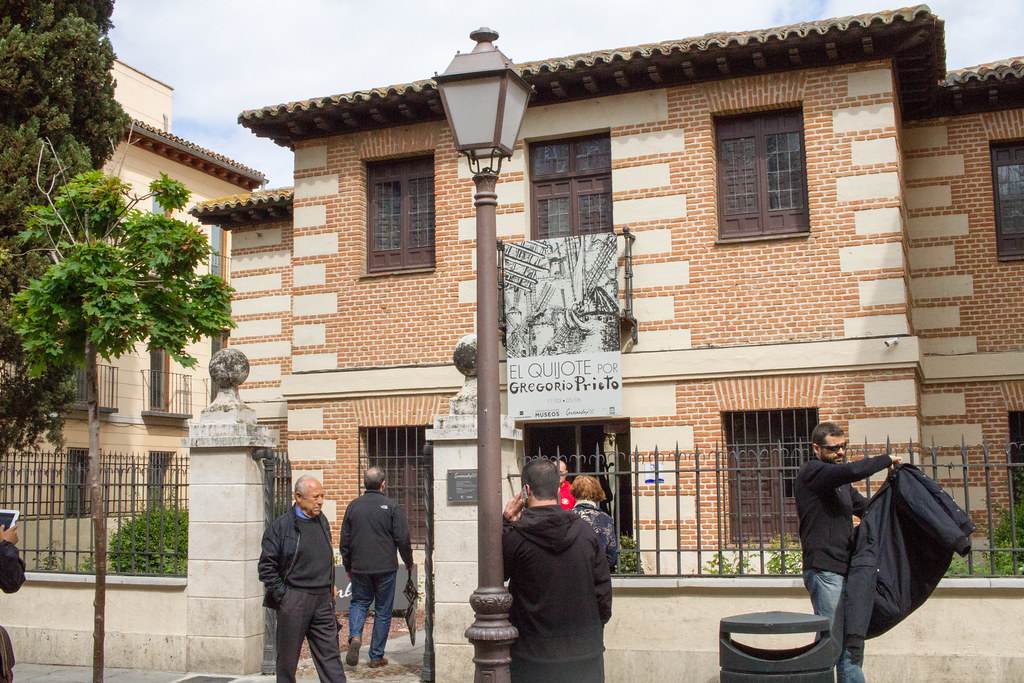 University of Alcalá, Guided Tour at a Glance

Then we met at the entrance of the university 5 minutes before 12:00 and at the time the guide came. Unfortunately, the tour was only in Spanish. I don’t understand at all lol. 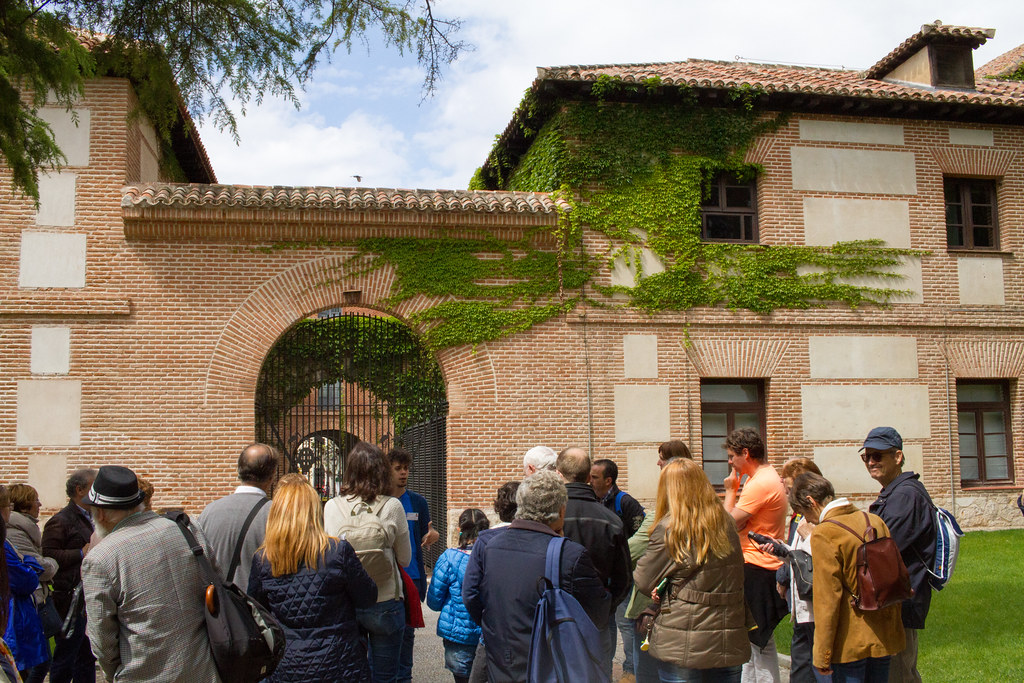 However, we still had no choice but to leave the tour at 12:30 p.m. at the latest, because it was tough to leave at 1:00 p.m. even though we were close to the airport. 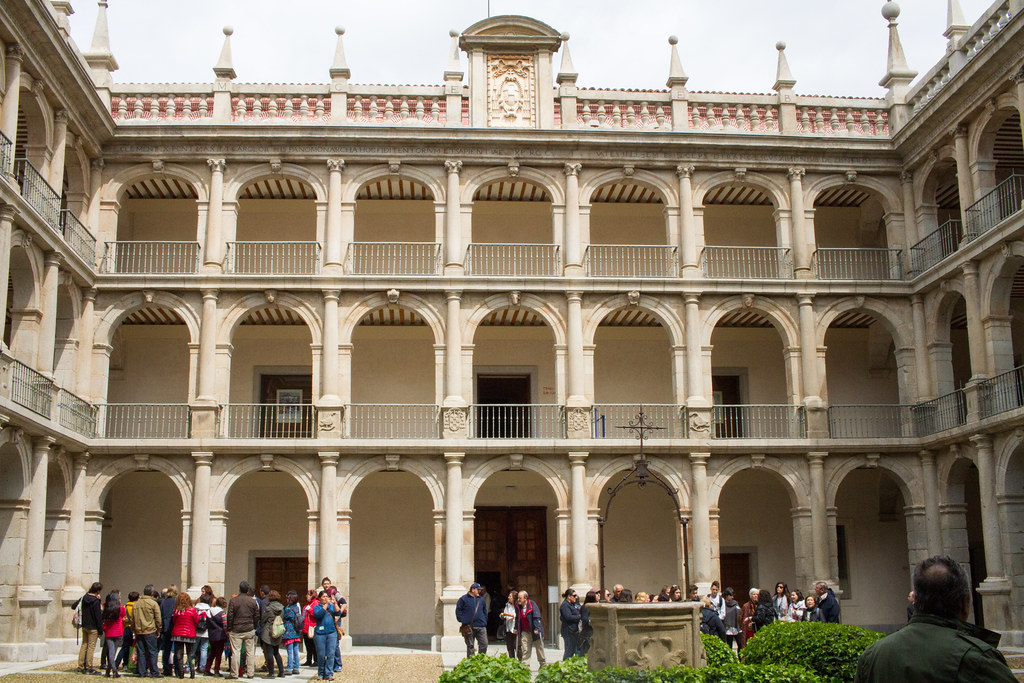 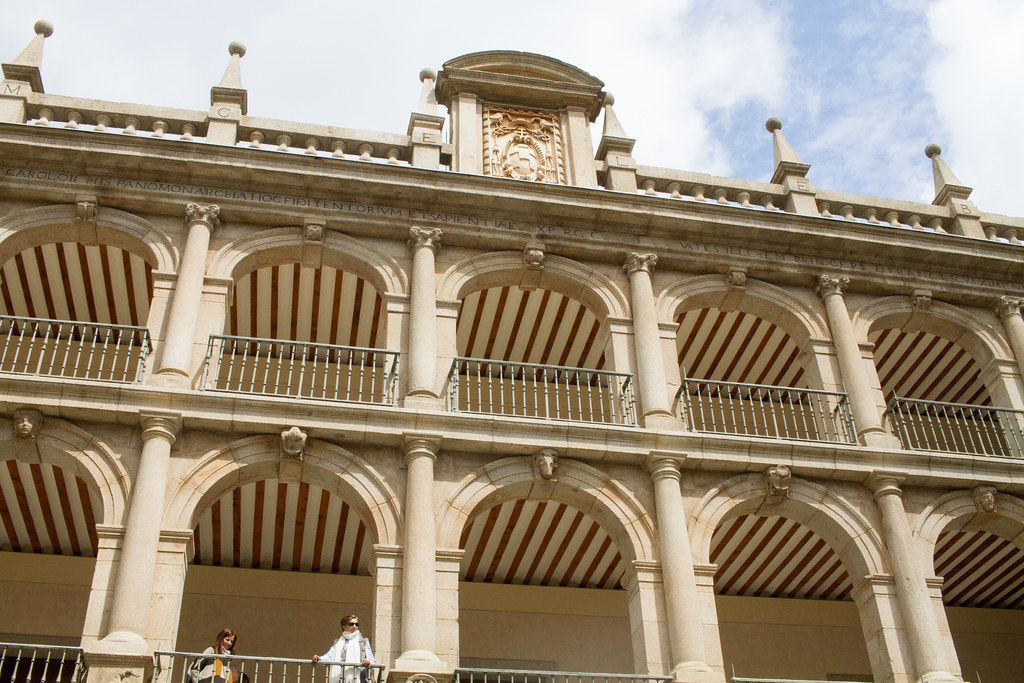 So we could not visit all the facilities. But it’s not far from Madrid, so we’ll come back another time.

In addition, we had an option to stay in this city. However, I chose Siguenza because the parador in Siguenza was too nice, and on the other hand, the parador in Alcalá de Henares was not so nice and modern.

Arrived at the airport safely

We left the guided tour on the way and went back to the car parked at Plaza Cervantes. We arrived at the rental car return area in Terminal 4 in about 30 minutes as planned. However, there was no gas station at all between Alcalá de Henares and the airport, so I couldn’t return the full tank after all. We probably lost about 10,000 Japanese yen. It was so frustrating…

The return flight was via Dubai, so it took a long time, but the flight to Dubai and the flight to Japan after the connection went smoothly, and I returned home safely after more than 20 hours.

Date of visit: just after noon on May 5One of the masterpieces of Montaner, the master of Modelismo, who is praised alon...

The title is long, but the next part of my 2017 Golden Week travelogue record and "Spain's Most Beautiful Villages" seri...

World Heritage Sites visited in May 2014

そろそろ旅ブログの集計をしなくては。First of all, I'd like to update this page as usual. This time, I visited 9 new sites and 3 revisited ...