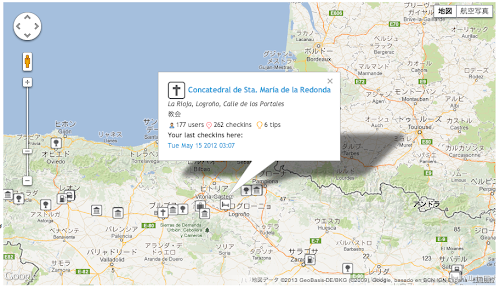 Less than an hour from Estella, we chose Logroño as our first overnight stop on our pilgrimage drive.

As always, reservations are made through the Booking.com iPhone app.

Although we found the hotel relatively quickly, we had a hard time finding a parking lot…but somehow we found a public parking lot not too far from the hotel. It was a good time, just before 8 o’clock in the evening, and we headed towards the old town, which was somewhat far from the hotel.

Apparently, the cafes are about to close, but most of the dinners start at 9 p.m., so I took a short walk along the street facing this church. I think Logroño is the biggest city along the pilgrimage route we visited today. It is a city with rather modern areas as well as a historic old town.

The Cathedral of Santa Maria de la Redonda, a landmark of the city, reflects the setting sun. The square in front of the church has a good atmosphere.

The etymology of the name Logroño is not known, but it appears as Lucronio in a document that states that García Sánchez I, King of Pamplona, donated the area to the monastery of San Migán in 965.

It’s interesting to know that this is the first time I’ve been to this place. Because I was actually planning to visit the Monastery of San Migian in the suburb of Logroño the next day.

The name of the city was recorded in a document found in the monastery of San Miguel, where the oldest surviving Castilian document was written.

By the way, Logroño is also famous for wine. The logo on the signboard of the tourist information center also has grapes. By the way, there was a vast vineyard from the highway on the way to the city. I have to drink it as soon as possible.

Let’s see, where should we go to shop…? There was also an information board like this. Apparently, there are only bars in the Spanish provinces, so there aren’t many so-called standard restaurants, but it’s not so hard to find one when it’s as big as Logroño. (That’s because I wanted to have a hearty meal on this day…)

I found a nice place = restaurant.

And of course, logroño wine! It was as good as its reputation! I ordered a glass because I was alone and had to drive, but I drank three glasses. And it was cheap!

And the food’s cheap, too! Risotto and sauteed Iberian pork. It’s nice to have this kind of fun when traveling in the region, where you can easily and cheaply enjoy local wines.

It was another beautiful sunny day. We had four beautiful villages planned.First, we left our accommodation in Castres. ...