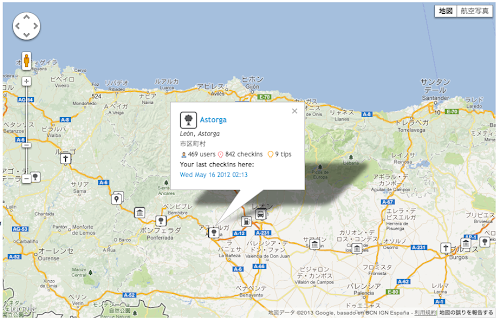 The weather was good and the tension was high, so Astorga was the seventh place we visited.

The pilgrim road drive is getting pretty serious on the second day.

As we arrived just after 7pm, it was easy to park on the street, probably because many people were on their way home. There is no such information in the guidebook, so I aim at the central square first with Google Maps on my iPhone. Astorga is a typical town along the pilgrimage route, but its history is very old, dating back to the Roman era.

The Roman fort of Asturica was built there. The Roman city was founded in 14 A.D. and was given the name Asturica Augusta by Emperor Augustus.

It’s a city full of such ancient romance, but it’s also a city with another interesting building, the Bishop’s Palace designed by Gaudi.

Its bishop’s residence is located in front of the cathedral. It is possible to see inside, but photography is prohibited. It was around 7:00 p.m., but fortunately the museum was open until 8:00 p.m., so we were able to visit just in time.

Alright, next we went to the adjacent cathedral. Quite a large church! The churches along the pilgrimage route are all magnificent and astonishing, but the cathedral in Astorga was the largest of them all. It was after 8pm at this point, and still light in Spain! But the sun is slowly starting to set. Before you know it, it’s 9pm!

The very long 15 days of sightseeing ended here in Astorga.

We have to head for the inn before sunset. I have a hotel not here in Astorga, but in Ponferrada, about 30 minutes away. Of course, I just booked it on the day with my iPhone.