What is it about July 20, 2011? Too many interesting things are being announced.

Now, it’s been a while since we took for granted the wonderful environment of Ustream and Twicas, where you can easily broadcast on the internet with just an iPhone, but now another revolutionary streaming app has appeared.

What it’s all about.

So this is an app that does this series of operations all at once. That’s great!

The series is not closed by one app, but as introduced in the list above, multi-camera video distribution is performed by linking the following three apps.

« Use each iPhone as Webcam » → TapStream Cam looks like this. 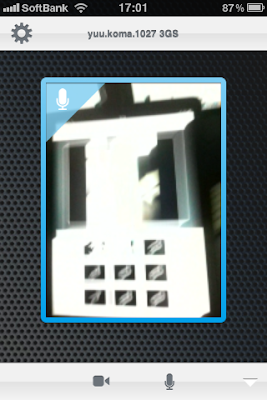 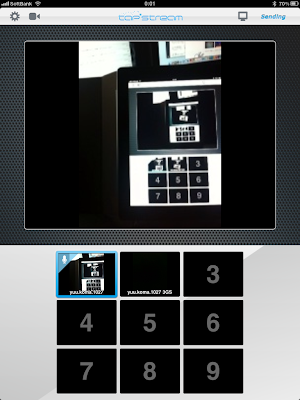 When you touch the camera symbol in the upper left corner, the « Camera / Image » screen will launch as shown below. This is the mechanism that assigns the Cam that is starting up in iPhone to each number of the Switch application. 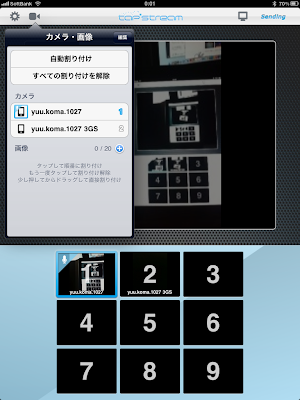 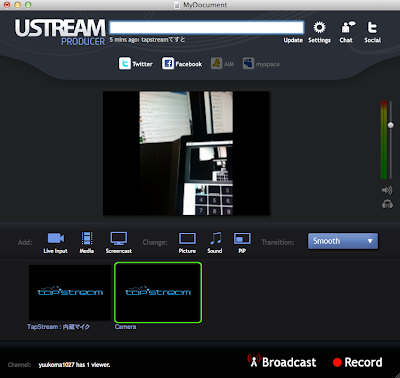 From here on, it’s just like a normal Ustream.

That’s why, with the advent of this app, you can now easily stream and distribute multi-camera video. Until a little while ago, I was surprised by the fact that real-time streaming distribution was possible only with the iPhone, but now it feels like a long time ago, and the progress of technology is amazing.

By the way, what I personally thought was great was the fact that I could use my iPhone as a mere Webcam.

At the moment it looks like TapStream can only be used with « Ustream Producer », but if you look at the site carefully, you’ll see that it’s described as « Ustream Producer and others ». In other words, it’s designed to be independent of the streaming driver from the start.

I think this is a huge breakthrough. Even if a more convenient streaming driver than Ustream comes out in the future, we’ll probably be able to migrate to it quickly. One candidate for this is the PC version of tweakath.

Or, you might be able to use Ustream and tweets at the same time. You’d need two Macs to do that, but it seems like this is a possibility. Well, I’m not sure how much need there is for this, and I don’t know if this is technically possible in the first place, but in any case, I’m sure there’s a lot of potential in the fact that it can be independent of the streaming driver.

But unfortunately, the « direct mode » that uses iPhone as « just Webcam », I don’t understand this, but it is unstable and freezes often. 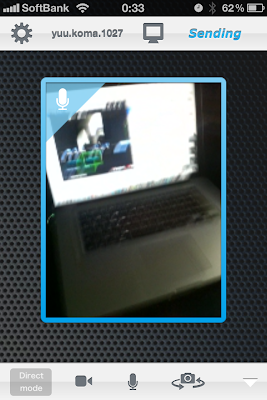 Well, this area will be improved little by little.

For the time being, it’s hard to find a personal use for the app due to its high functionality, but I’m very excited to see a great app that feels like the future.

I don’t organize my icons anymore because of Spotlight.

「control+スペース」です。For the past year or two, I've been extremely lazy about organizing the icons on my iPhone. I rarely or...

Overseas unlimited packet service, the bill is fixed. What is the price you are interested in?

I looked at My Softbank after a long time and confirmed it.世界対応ケータイ（パケット（PCダイレクト）） 1,635,820円It would be horrible if the...

When I was writing my last travel site article, I discovered that this service was created within the Booking.com app. W...

Day One It’s been a while since I’ve used it, but it’s evolved!