Clerveaux for the previous night. It is located almost north of Luxembourg, but not far from the Belgian border. So I went there anyway. 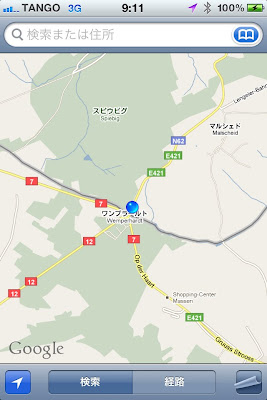 Well, it’s the same old empty border…. I’ve been to Belgium several times, but this is my first time to enter Belgium by car. Hmm, the font is not so cool.

Now that I’ve crossed the border, I’ll have to remember to change the carrier I’m connecting to. 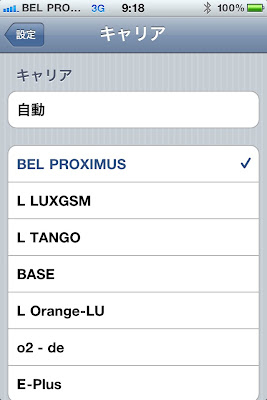 The goal is to go to that famous course.

Why Belgium when we have to be back in Paris by the end of the day? Because « Spa Francorchamps » is nearby!

Spa Francorchamps, the venue for the F1 Belgian Grand Prix, is located north of Luxembourg, less than half an hour from its border.

Moreover, it takes 5 hours from this spa to Paris by car. I thought I could take a glimpse of the course if I left Beaujolais early in the morning, so I decided to go to this famous course.

I was able to get on the Belgian side of the highway without any hesitation at all. And finally we are getting closer. We should get off here, right? It takes about 5 minutes to reach the course after getting off the highway. Apparently, there’s a car driving around with a blaring sound… Is there some kind of event going on?

You put me on the course without my permission!

Anyway, there were a lot of parking spaces beside the course, so I parked properly and approached the course. The entrance was open….

Then I went into the auditorium. Gosh, this is that « Eau Rouge »! Impressive? I never thought it would be this easy to get into the circuit of my dreams… And for free. What a way to get to the pit lane!

I don’t know what it is, but it looks like you can go further and further inside, so I went there. I crossed the underpass under the track and here I am, in Pit Lane! Thank you very much, it seemed to be holding an event. It’s an event where car owners bring their own race-spec or circuit-spec cars to run. Obviously, I’m the only Japanese or oriental person here, but they really don’t say anything…. If that’s the case, why don’t I stay here until I get angry? I’ll take a lot of pictures. We were also able to take pictures of the run up to the Eau Rouge at close range as you can see. Is this a podium by any chance? I tried to get closer. It was surprisingly small… While I was taking pictures here and there, a car with a difficult problem ran through the straight line in front of me with an explosive sound. Luxury cars all over the place!

I was very happy just to be able to visit one of the most famous F1 tracks, but perhaps the most exciting thing was that I was able to see so many luxury cars. And after all, the most common was Ferrari. Apparently, this is for sale. There was a piece of paper that says « If you are interested, please call here ». It’s hard to understand, but the paper on the lower right of the windshield in the picture below is it. By the way, the interior is really cool too. I was planning to just take a quick look at the circuit and go home, but before I knew it, I had spent over an hour there taking pictures.

I don’t think it’s possible to visit this track that F1 fans adore so much. I can only say that I’m really lucky.

So I felt like I was given an unexpected gift on the last day of my European drive. It will definitely be a memory that I will never forget.

Visit date: October 28, 2015, weather: rainy and sometimes cloudyI wish it had been sunny...From Heidelberg to the Rhine...

Today is the final race of the F1 Spanish GP. I'm going to watch it of course.The weather in Barcelona today is sunny an...

Date of visit: May 5 and 6, 2012 (overnight)Le Puy-en-Velay, the town where we stayed during the tour of beautiful villa...