There are still a few more in the series except for the most beautiful village in France. We’re almost at the end of our trip, and we’ve finally made it to Luxembourg.

In the meantime, we’re going into Luxembourg.

My goal is to go to Schengen first, but I’m going to enter Luxembourg for now.

Luxembourg as seen from the French side. The signs at the border telling the traffic rules and speed limit of the country have become familiar. Luxembourg is basically the same as France. The signs are also becoming more Luxembourg style. Just a few tens of meters behind is France…. Now, about the signal, it seems that the French signal is still available around here. So I was able to use Ima Koko Now! and Google map are working as usual.

Let’s go to Schengen. It’s only 10 minutes away from here.

So we arrived in no time at all! Let’s see, Schengen, what kind of place it is, if you look at the map (iPhone screenshot). It is a place like this. 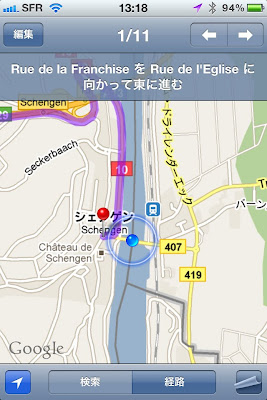 The gray lines are the borders, right? There’s a line first in the middle, north and south, and then a line that breaks off around the bottom center and down to the right.

Yes this city is on the border of three countries!

Luxembourg on the left, Germany on the top right, and France on the bottom right.

From this bridge over the Moselle River, it’s only 1km to Germany and 2km to France. Germany is just across the river. The city where the pact was made.

It is an agreement to allow European countries to cross the border without border check. Of course, there are still remains of the building which looks like a checkpoint in France-Luxembourg, but no one is there and nothing is checked.

I’m familiar with the Schengen Agreement because I’ve traveled by car in Europe many times, and I was finally able to visit the city where the agreement was signed.

The city of Schengen itself is a quiet country town surrounded by rivers and vineyards. Monuments and buildings associated with the agreement were located along the Moselle River. I haven’t read it properly, but it seems to contain information about the Schengen Agreement in each country’s language. So I’m very happy to finally go to Schengen, which I’ve been longing for. May 2014 Italy’s Most Beautiful Village Tour Field Report No.2

We arrived at Paris Charles de Gaulle airport at 4:00 in the morning, where we will change our flight to Naples. I haven...