I’ve been so busy that my travelogue has been delayed. Yes, I still have a lot to tell. This time, I’d like to share with you something other than the beautiful village.

From this day, we entered Brittany. We came to Saint-Malo, a big town in the east of Brittany. I hadn’t decided whether to go there or not, but when I dropped by there, I found it was a very beautiful town, so I decided to stay there. There are many people and cars in the tourist area. Somehow I managed to find an underground parking lot and parked there. It’s nothing to do with the red DS3… (It’s cool!)

St. Malo is a walled city. We checked into the hotel we found shortly after entering the city without reservation. We started sightseeing immediately. After all, it’s a climb up the city wall. A lot of cars and a lot of boats. It is lively and gorgeous. It’s nice. According to Wikipedia, St. Malo was famous as « the stronghold of ferocious pirates » in the Middle Ages. It’s such a splendid old town that you might think it’s a World Heritage Site, but it’s not like that. It wasn’t written, but maybe it was destroyed in the World War II, or there is such a past…. ← This is unconfirmed information.

Even so, the view that is now spreading out in front of me is nothing short of amazing.

I came to the opposite side of the ocean from where I parked my car. 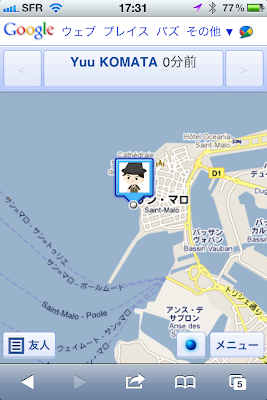 It seems that I can go to the other side, so I decided to go there.

I guess this just means that you should be careful of the tide. It looks like it’s still okay, so I’m not going to worry about it. I went down to the sandy beach. I am slightly concerned because shoes are not waterproof a little too much. We have come to this area. You can see the whole city.

There is a fort here further on, but apparently the tide was about to come in, so we decided to hurry back. Then we came back to the city wall. It took us only 10 minutes, but as you can see, the path we had just taken was disappearing in the tide. It was so close… You will be out of sight in no time. It takes a little over two hours to go around the city walls. The photo below is the city hall, and the hotel I’m staying at is in front of it. After this, we had a meal and went to bed early. The next day we checked out at 7 am and left. Date: September 19, 2015「Google Timelineによる軌跡」From this issue, I will be writing a travelogue of my visit to Italy durin...

It was another beautiful sunny day. We had four beautiful villages planned.First, we left our accommodation in Castres. ...