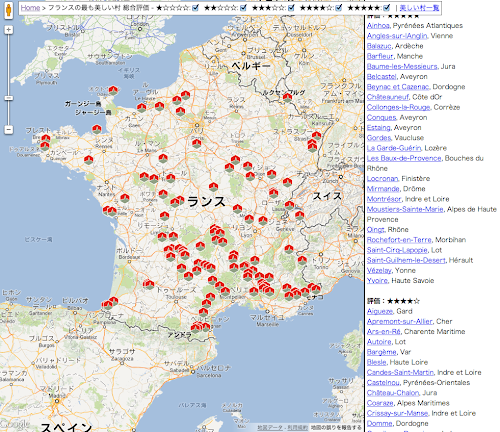 I made a map of the « Most Beautiful Villages in France » that I have visited so far.

On the right side is a list of the villages we visited, sorted by overall rating. Click on each village to see the 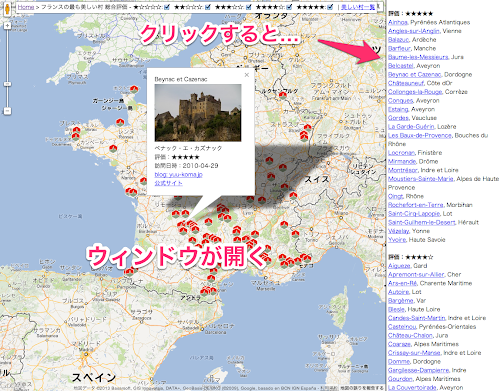 In this way, you can see the actual photos taken there, your own blog post, and a hyperlink to the official website.

I’ve traveled quite extensively, by the way.

How did you do it?

I went through a lot of processes to make it, but I basically based it on the method described on this site.

It requires some knowledge of MySQL, php, xml, and Google Map API, but I think even a novice can build it if you manage to do your best.

The biggest hurdle is uploading data to a MySQL table

Based on the site introduced above, it was not so difficult to read location information from MySQL table and display the map using Google Map API.

But the problem is data, I had a hard time creating a data table for a beautiful village.

This was dealt with in the following way.

Get the location of beautiful villages using Google Script.

It was a particular bottleneck for me.

Of course, there is also a way to manually search for each location using Google Maps, but this is quite a painstaking task when you have more than 100 locations.

Create a spreadsheet as shown below, and create a list of target villages in column A. 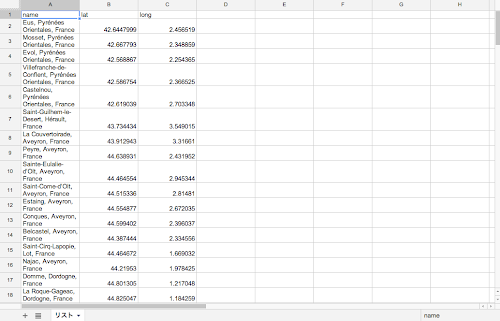 Then write a Google Script that looks like this

In this way, the latitude and longitude of each village will be output one after another in columns B and C.

By the way, you can learn more about Google Script at the following site

And the following books.

I referred to the

A « département » to make sure you can find it.

The list of village names in the Google Spreadsheet I mentioned above, but if you look closely 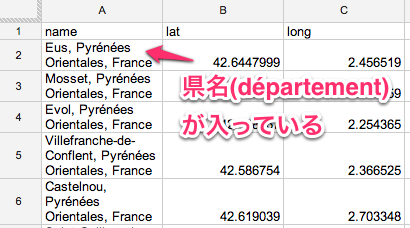 each of which contains the name of a « French department (département) ».

In fact, if you search only for the name of the most beautiful village in France, you will often get no results. However, if you add the name of the province or even the country (France) to your search, you will almost certainly get a result.

It is the name of the prefecture of each village, but the list of beautiful villages on the official site, the

You can find out from

If you copy this page and process the text appropriately, you can complete the list of villages with prefecture names.

By doing this, we were able to successfully get the location information of each village using the aforementioned Google Script.

Create an SQL INSERT statement from Excel using a macro

By the above process, we were able to create such a data table in Excel. 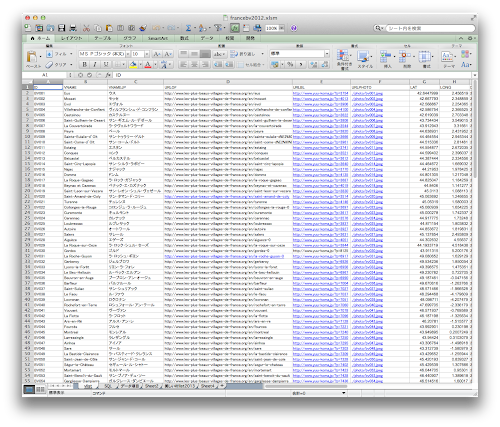 The question is how to upload this data to the MySQL table.

For this, I used the following useful macro.

‘The first half of the INSERT statement

‘After values in INSERT statement

This is so convenient!

That’s it for my review of how to make it.

Summary of all 23 sites visited – Tour of the most beautiful villages in France 2012 -.

I've finished writing the 2012 GW version of my tour of France's most beautiful villages, so here's a summary. The last ...

It's already less than two weeks until our annual GW trip. Next weekend is full of events and I can only prepare for it ...

Diary of a short trip to France in November 2016 3: Exposition « La collection Chtchoukine » (The collection of Chtchoukine) at the Louis Vuitton Foundation

The second special exhibition we visited in Paris was the "Chtchoukine Collection" (Icôns de l'art moderne. La collectio...
We will go to GW again this year « Tour of the most beautiful villages in France » for the first time in Corus! – 2013 France
Rent a car at Barcelona Sants station -2012 France and Spain
Page d’accueil
02.IT related
google
タイトルとURLをコピーしました