You can see the satellite photo.

This mountain is known as the stage for the Tour de France’s mountain stages and has been the subject of many legends. I recently started cycling, and that’s how I learned about this mountain.

We had some time and my parents seemed fine, so we decided to go up there.

Because of the bicycle race, the road was very well maintained. Therefore, it was very easy to drive for the slope. 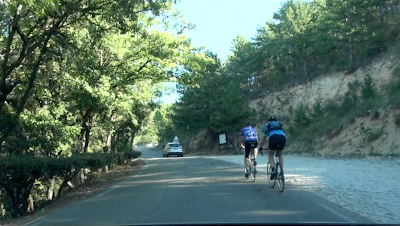 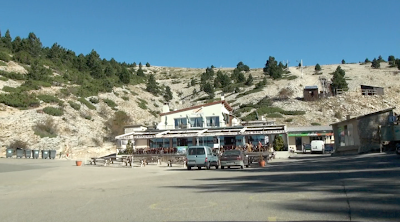 Well, even so, it’s a huge slope around here. Really. Even so, a lot of people were climbing up by bicycle. It was amazing. 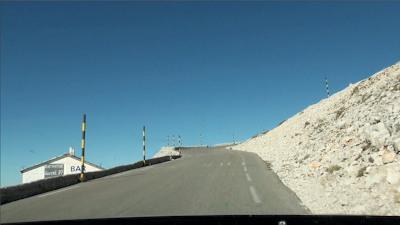 This TV tower is the trademark of this mountain. At this height, the scenery is desolate with bare limestone rocks. So I was able to reach the top from the town at the foot in about 30 minutes because the road was very good. The altitude is 1,912 meters. This mountain is neither in the Alps nor in the Pyrenees, but is an independent peak standing in the west of the Luberon Mountains. Not to mention the clear skies as you can see!

On the way back, I took a picture of the « Tom Simpson Monument » that I had missed and went down the mountain. We had a short stay but enjoyed the wonderful view of Provence.

I've stopped updating for a while again. The number of accesses has been dropping.... Is it natural?It was September 201...

From arrival in Corsica to Bastia -2013 France

I've finished my diary of the most beautiful villages in France, but there's more to France this year than just beautifu...

On April 29th, we started from Annecy in the Alpes region, visited two beautiful villages, and then headed to Besançon, ...

During the week of Sea Day in July 2017, I took a week's holiday and travelled to the Walloon region in southern Belgium...
A little thought after seeing the planetarium « Symphony of the Universe » at Katsushika City Museum of History and Astronomy, the power of imagination and theory education
Zugspitze (Zugspitze) | I went to a beer shop specializing in German and Austrian beers!
Page d’accueil
2011 France fall
タイトルとURLをコピーしました