This trip is a tour of « the most beautiful villages in France », but it’s not limited to just that. It’s true that we mainly visited beautiful villages, but we also visited tourist attractions in some places. I would like to introduce them to you as well.

Google Latitude is kind of interesting… 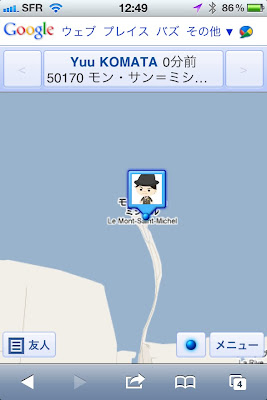 This is actually my second time to visit Mont Saint-Michel. The last time was in 2006, when I took my first European drive to visit the ancient castles of the Loire. We had a lot of time, so we came here at once from around Le Mans.

Well, I decided to go sightseeing quickly because it was the second time. But I had the impression that there were more people than before. When I went there for the first time, I wasn’t used to seeing so many stone villages in France, so I remember I was very impressed.

I thought it would be a bit disappointing to see so many souvenir shops, but Mont Saint-Michel is still interesting!

But still, it’s a beautiful day, so I’m buying it. 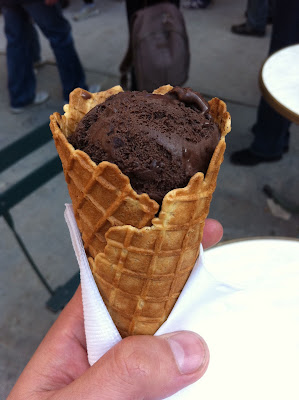 By the way, it is a parking lot, but I was guided to a place very close to the entrance to be lucky. I was able to park in the area on the bottom left of the photo.

Now of course we headed to the monastery at the top. It was a pity that there were so many tourists overwhelmingly compared to before that we couldn’t appreciate it slowly. Just a month ago, there was a great earthquake in Japan, and there was a leaflet like this on the wall. The monastery here is very fine, isn’t it?

I wonder if we were there for an hour. When we came back to the parking lot, there were more cars. iPhone, iPad apps: « France from the sky » is fun!

Germany and the Enclave Tour Autumn 2015, Part 8: Is it actually a German enclave? Beer Hall in Konstanz

I used Pinterest to show the details of the photos I used in my calendar.

The original calendar that I made again this year.恒例のiPhotoオリジナルカレンダー2015 | my lifelog yuu-koma.jp it was just before t...

Champagne has arrived from Reims!

It's been a little over a week since I got back from France, and I finally received the champagne I bought in Reims. The...

Local time: May 4, 2014On this day, we planned to visit Palermo, the largest city in Sicily, plus more. And it was a day...
Vouvant – Tour of the most beautiful villages in France 2011 No.11
iMac has come to our house ♪( ´▽▽)
Page d’accueil
2011 France
タイトルとURLをコピーしました