The second village of the day is called « La Flotte », located in the « Ile de Ré ». It’s already on the Atlantic Ocean side. The place is around here:. 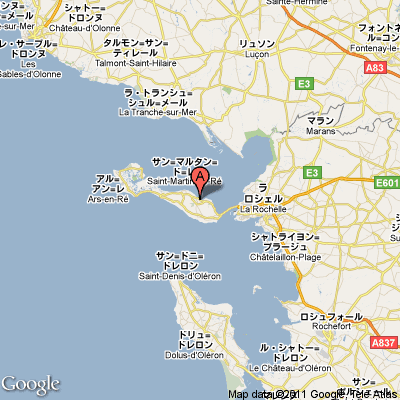 It is on the west side of a large city called La Rochelle, which is a remote island, and you enter the island by crossing a large bridge over the island. It’s a small island, so the distance from the bridge to the village is not so long, but the road is narrow and it was very crowded with cars because it was a resort. Even so, we arrived at the entrance of the village in about 15 minutes. We did have a bit of trouble parking, probably because there were so many cars, but we managed to find it. I parked a little bit far from the center of the city, so I walked along this way to the center. About 3 minutes to the center of the city. There were many restaurants and cafes around the yacht harbor was crowded with many tourists. This is the tourist information center of the village. It’s very nice. It was very sunny and of course very hot. Such a resort village by the sea should be visited on sunny days. May 19.We are currently waiting at Charles de Gaulle Airport until departure.Today is the last day of my long trip to Fr...

Local Time: September 14, 2014Leg recovery is going well.One night has passed since the Medoc Marathon. I was worried ab...

We leave Trier and head for Luxembourg. Here we parted ways with Germany for a while. Trier is almost on the border with...

Using Fusion Tables, I created a list of French provinces I’ve been to or passed through.

Out of Sicily, Back on the Italian Peninsula, Going on the « Toes » May 2014 Italy’s Most Beautiful Village Tour Local Report No.13