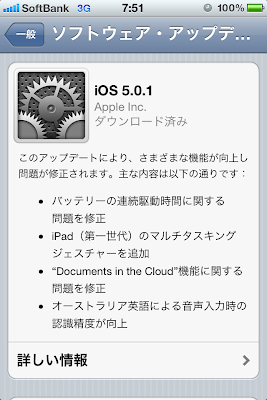 On the morning of the day after this was released (which was midnight Japan time, since it was US time), I was surprised to find my iPhone unusually hot on my bedside table.

I took a look at your iPhone. 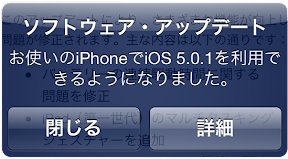 The display was standing up.

If you look closely again, you will see a ? in the upper right corner that you have never seen before in the settings icon. 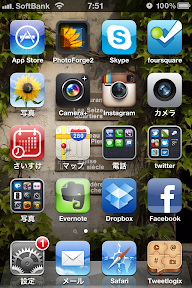 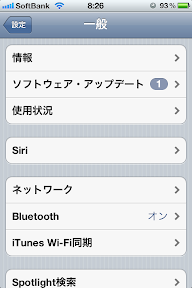 Starting with iOS 5.0.1, for the first time, the update is done without connecting to a PC. Moreover, it seems that the update data was already downloaded during the regular backup process to iCloud.

As for the cause that iPhone had become unusually hot, at first I thought that there was something trouble during automatic backup to iCloud that started iOS5 Kara (around 1:50 in the middle of the night in my case), but actually this might have been related. 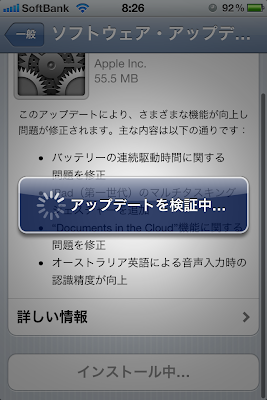 So, let’s get to work! I’d like to say that I’ll update it as soon as I can, but it was a weekday when I received the update notice, so I thought it would be better to update it after I get home.

However, as far as I could tell from twitter, it would take about 10 minutes, so I decided to try it while walking to work that day via PocketWIFi.

No problem indeed, and as you said, the update was done in about 10 minutes. It was done with plenty of time to spare before I arrived at the office. I was always prepared to be late to the office to update on my computer, so that’s really great when you think about it!

I recommend this book to understand « cloud » again.

I think the term « cloud computing » started to be heard in 2008. I think it was around the fall of 2008 to the winter of 2009 that Maruzen started to feature it in their computer book section. I think it was just three years ago.

That’s when I came across this book.

It’s no exaggeration to say that this book got me started with Evernote and even led me to buy an iPhone.

It’s been almost three years since it was released, and I think it’s a great book that does an excellent job of explaining the key points of the cloud.

At that time, I had just broken my TV, stopped using newspapers, and was about to shift to a completely Internet-centered lifestyle, so I think I was lucky to have learned about the essence of the cloud at a truly perfect time.

Recently, the term « cloud » has become a familiar term that is commonly used in various media, but I feel that its essential meaning has become unclear.

This book is a little bit old, but I recommend it if you want to know what cloud computing is once again.

What is the Power of Smartphones?

If you don’t realize and understand these things, you may feel like your smartphone is a waste of money. Is that too much to say?

And it was the book I mentioned above that taught me that these items are the essence of the cloud.

I think it was this book that naturally exposed me to the concept of the cloud and helped me make a smooth transition to the iPhone.

Let’s return to iOS5. I thought about iCloud which is one of the biggest features of it, and what significance it has again.

This is the perspective of power that I raised above.

When I think about it, I think that iCloud is different after all.

What will happen to the PC in the future?

However, even so, PC is absolutely necessary. In the first place, the image and the image system cannot be handled without a PC.

Especially when I changed all my desktops and notebooks to Macs in the past year, I realized again how easy it is to use Mac client software in a local environment.

So, it can’t be the cloud or smartphones for everything, right?

That’s why I think there’s still a lot of « something » that can be done to make more effective use of local terminals.

Personally, what I expect from Apple next is a breakthrough on new ways to use the « PC = local terminal » in the age of smartphones & cloud computing.

I am thinking variously while using it myself, but it is the place where I want to ask the imagination of a wonderful world view to Mr. Apple who has an immense competitive power to OS to hardware there.

Above all, it is inevitable for Apple to increase the sales of Mac itself, so they must be thinking of something (laughs).

Now I’m back with Amazon Kindle for Mac. After using it, I realized that it’s different.

What's with this useless motivation from last week (laughs)?Now I've installed Amazon Kindle for Mac. It's an app that's...

Global Data’s « Europe Tour Plan » is now available, but I wish it was released a little earlier…

もう何度もお世話になっていますグローバルデータさんのMiFiレンタル。ついにというかようやくといいますか、先月「ヨーロッパ周遊プラン」が開始されました！詳細はこちらを： fantastic! It's such a great thing ...

わたくしにとって最重要アプリでもあるこちら、昨日アップデートがあったのですが、「iOS向けのGmail公式アプリが通知センターをサポート」ってなんのことかなー、とっくにプッシュ通知対応してるじゃんと思ったら、こちらの機能のことだったのかなる...
How easy is it to use online printing on your iPhone? I’m needing my printer less and less.
Roussillon – Tour of the most beautiful villages in France 2011 No.58 -★★☆☆☆
Page d’accueil
Apple
iPhone
タイトルとURLをコピーしました