We arrived at the Circuit de Catalunya early, although we were a little worried about how to get there.

We were told that it would take 30 minutes to walk from the nearest station to the circuit, but there is a decent bus service a few minutes walk through the shopping street in front of the station, so we used that. The information on how to get to Circuit de Catalunya from Barcelona city was not very helpful because of old information on the internet, so I will write more details on this blog later for future reference.

Well, that’s how I arrived at the venue, Circuit de Catalunya, safely. I was worried about my ticket, which was probably okay, but I was able to pass through the gate with no problem at all. This is my third time to watch F1 itself. My first F1 race was in Europe. The second time was the Japanese GP at Fuji Speedway.

I don’t really have a favorite team, but my seat was right in front of the Lotus F1 team, so I decided to cheer for them and our Japanese teammate Kamui Kobayashi. Kamui’s pit is a bit far away, so it’s not easy to see, but I can use the telephoto lens of my SLR camera in the main stand, so I can see it somehow. Oops, sorry I didn’t take any pictures.

The back of the stands. You can see official goods like this everywhere. You can buy beer and soft drinks. They also sell sandwiches and other snacks. It’s not cheap, but it’s not too diversified. Also, there was a corner behind the stands to honor the past champions. There were a lot of old faces. But with the pits right in front of me, I could take all the photos I wanted of the cars on pit road! The results of today’s qualifying round are as follows. 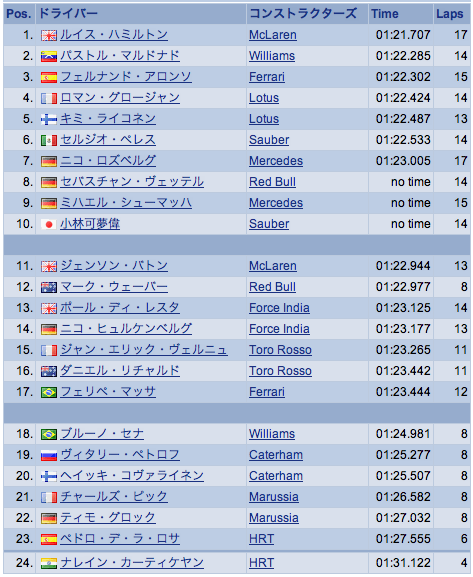 The weather in Barcelona was clear and cloudless today, just like yesterday during the race, but from about this evening the clouds started to come out little by little and the temperature started to drop. It looks like tomorrow’s weather won’t be as clear either.