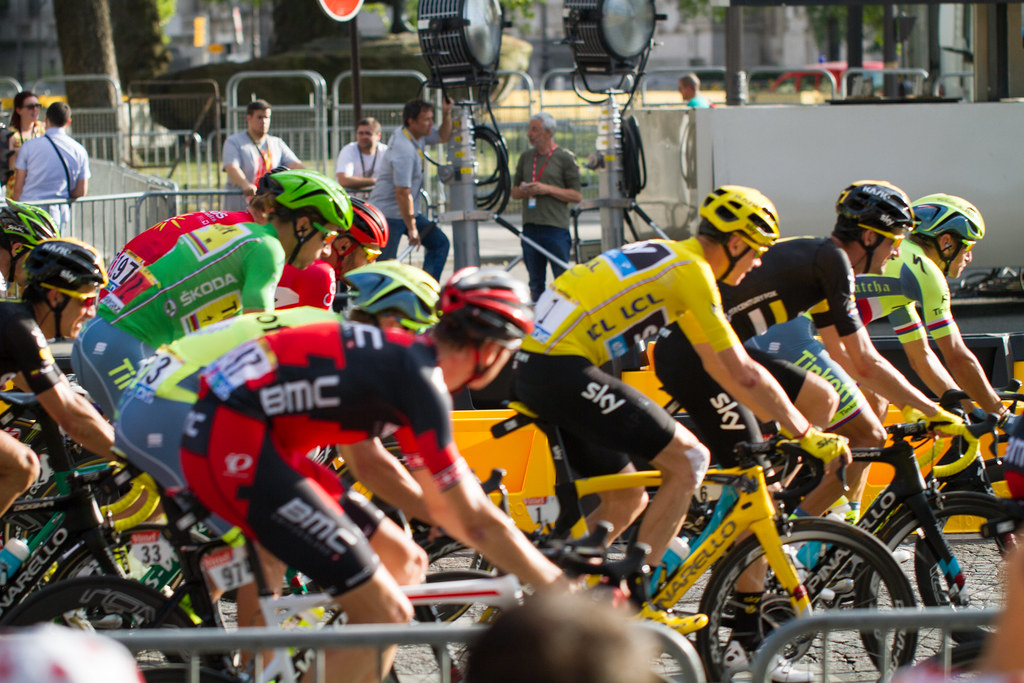 Watching the tool for the first time was very powerful. But it was pretty expensive, even though I wanted to try it once…

The main purpose of this trip was to watch the Tour de France live. As you know, I like to rent a car and go wherever I want, so I can go almost anywhere in France, except for the most famous passes in the Alps and Pyrenees. However, the only one that seemed to be the most convenient for me due to the schedule was the final stage in Paris.

I thought I could get by with a free basic viewing, even though it would be crowded to watch the games in Paris, but I wanted to take my time anyway. So we thought we should arrange a stand on the Champs-Elysées on the last day. So I decided to do some research. There are many tours that include the stands on the last day of the race, not only in Japan but also overseas, but this time I chose the following company, which was one of the travel agencies that the official website of the Tour de France offered. In fact, this is the same British company I found when I applied for the Medoc Marathon before.

I just saw that you’ve started booking the 2017 tools as soon as possible.

Last year, there were many different types of spectator tours available. The price is certainly high, but I think it’s much better than Japanese agencies, because they give you extra things. Come to think of it, I think that Japanese travel agencies were expensive and troublesome with all the extra options in the Medoc Marathon.

Well, we chose the number 2 stand. It was about 3 months before we applied, so we could not get a place in front of the goal line in the main stand. I think it is around No.3 of the following illustration map. However, it is still a great place to watch the game in the middle of the Champs-Elysées.

(From the pamphlet I got.)

Unfortunately, I couldn’t get a seat in stand 3 where I could see the moment of the goal. I think the timing of application was too late. Of course, it is the most expensive.

Pick up at the designated hotel on the day before or on the day of the event.

This travel agency is a British company. They will give you a ticket to enter the stands to watch the game. The only thing I was a little worried about was the fact that we would not be notified until the very last minute in mid-July. You will receive this notice by e-mail.

If you live in the UK, we’ll post the tickets to you, but if you’re overseas, you’ll have to pick them up the day before or on the day of the game at a designated hotel in Paris. However, that’s good, but I thought that mid-July was too late. Especially because this trip was departing on 14th.

In the end, I was able to make it before departure, but I was still worried because it was my first attempt. Apparently, the travel agency of the overseas system seems to do such a contact at the last minute and is always harassed. Means of looking at the mail in the field, it is good with a smartphone iPhone, but I realized again that it is absolutely essential.

You will receive a pamphlet (pdf file) like this by email with the information email that arrived at that last minute. I was relieved with this for the time being. I printed it out just in case and left Japan.

So I arrived in Paris the day before just in case, and went to the designated hotel about 5 minutes from the Arc de Triomphe. There were some people from the travel agency in the lobby of the hotel, so I grasped the situation immediately and told them my name and reservation number (just show them my email). This is the ticket I received.

(From the pamphlet I got.)

On the day of the event, we went to the Champs-Elysees, which was on high alert.

The race was in the afternoon, so I spent the morning sightseeing in Paris as usual. (I’ll show you more later.) The schedule for the final stage was like this: it would be enough to enter the stands after 3pm. It might have been better to enter the stands a little later, but considering the baggage check and the fact that the seats were unreserved, it would have been better to enter at around 15:00.

We came to the Champs Elysees a little after 2pm. All the streets leading to this avenue are still closed. All the roads leading to the avenue are closed, including the sidewalks as well as the bike paths. The Champs Elysees is free to go, except for the area near the stands where we are going. However, in order to enter the street, you have to go through a baggage check at a checkpoint. There were checkpoints everywhere.

It was a big event, but also because of the terrorist attack in Nice just two weeks ago, the Champs-Elysées, where the finish line was located, seemed to be on a tighter alert than ever.

The Champs-Élysées was full of excitement and a huge crowd. 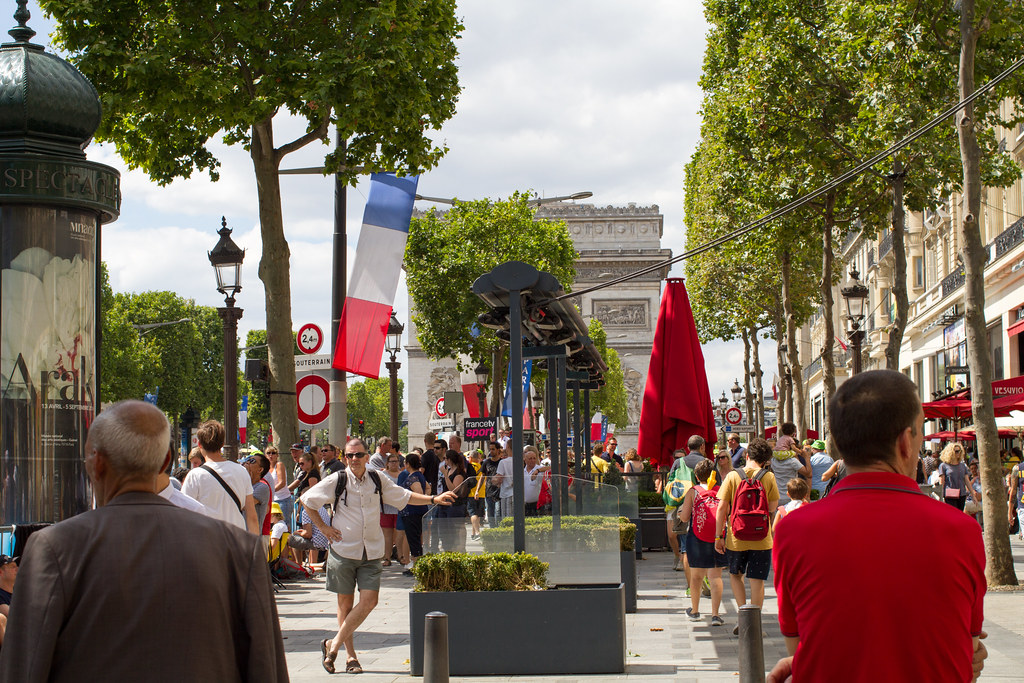 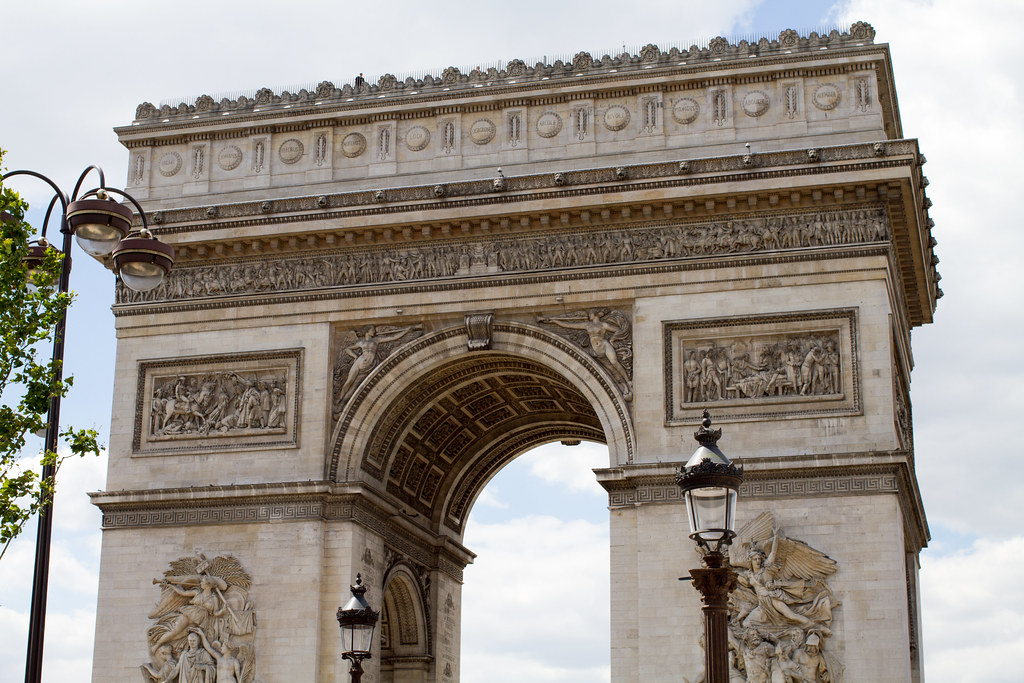 By the way, there was a women’s race as a pre-event around 2pm. This was the first road race I saw live in Europe. I was surprised at the sound of the group running on the cobblestones, which was very powerful. 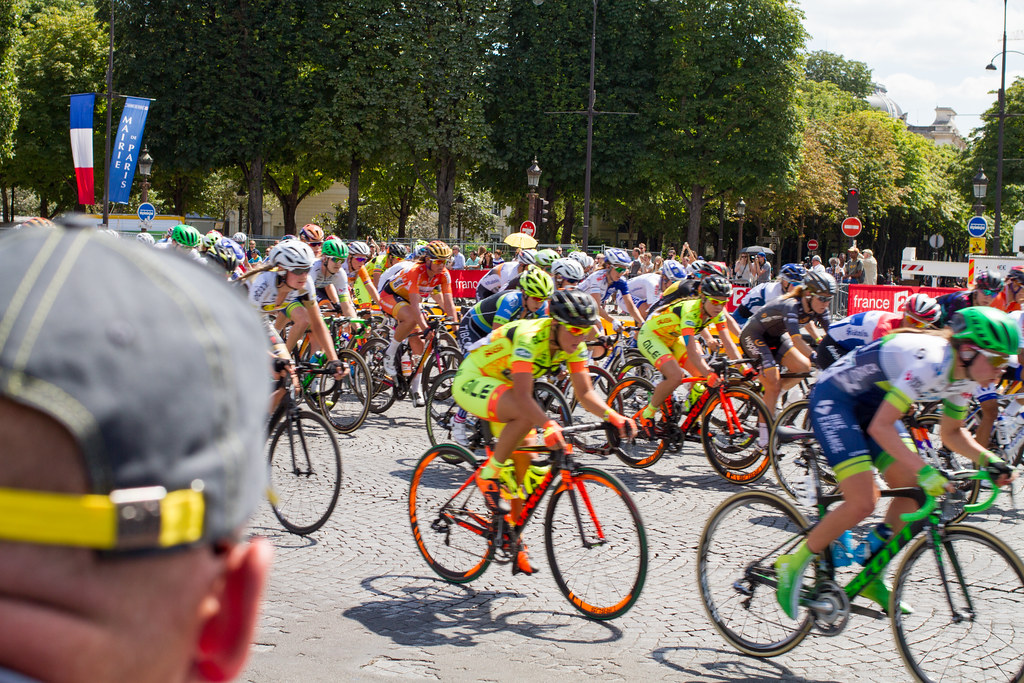 After watching the women’s race, we went for a quick walk along the Champs-Elysées. I was attracted by the souvenir shops, but all the official goods were expensive, so I just held back with window shopping. 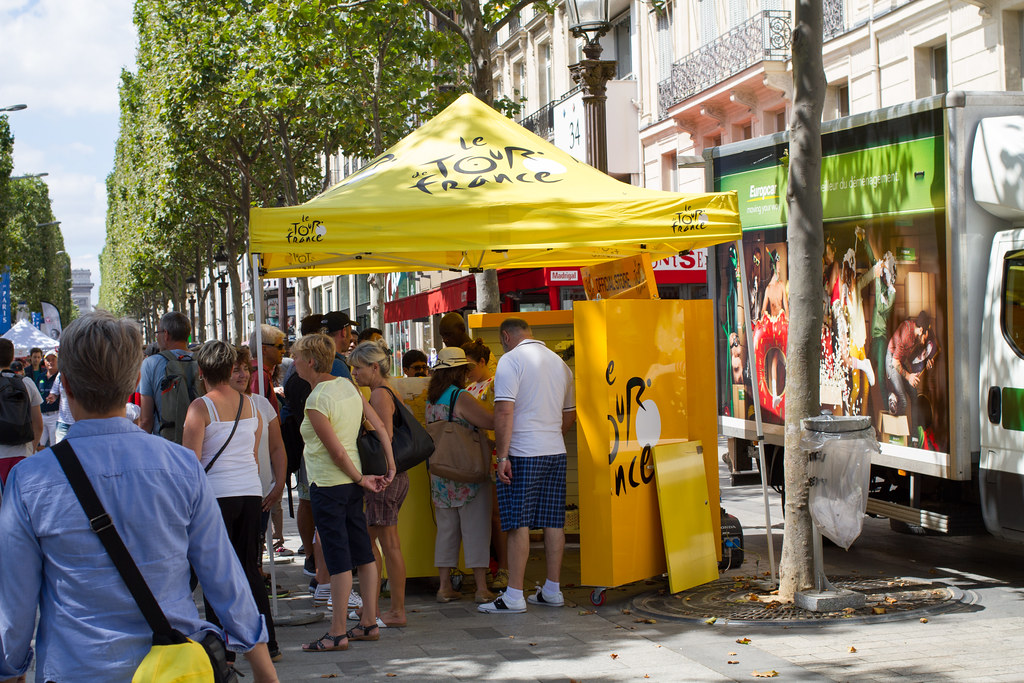 Further into the spectator stand area

In the meantime, it was 15:00, so I went to the spectator stand. On the way, I found a podium. The area behind this podium is where the stands are located. 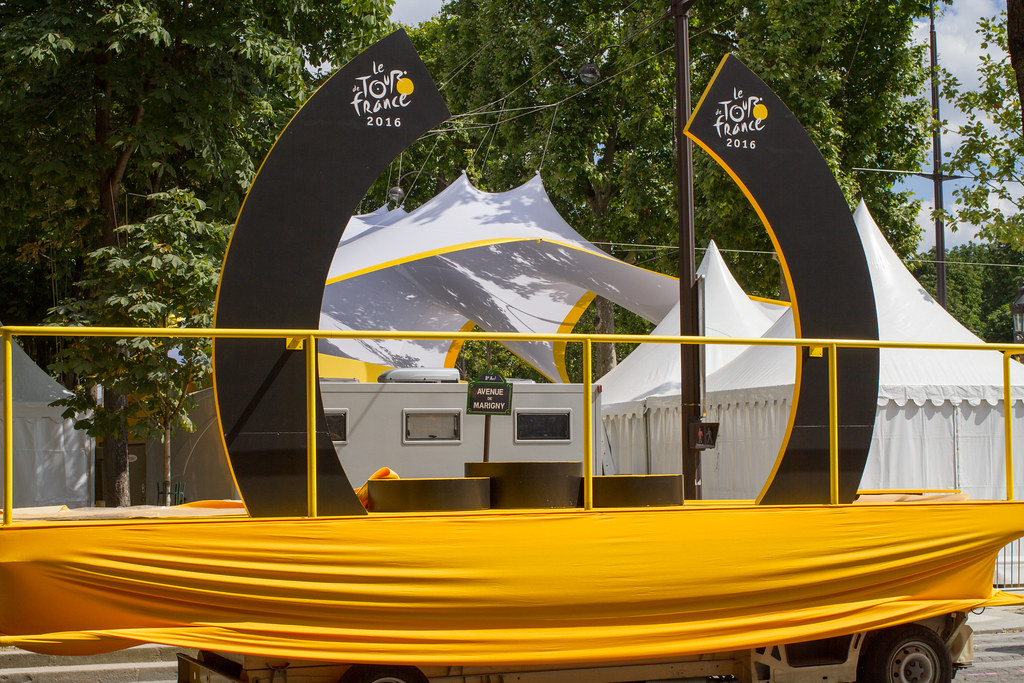 The stands are located on the Champs-Elysées, but the finish line is quite near the Place de la Concorde. Our stand #2 was not in front of the finish line, but just behind it, so it was quite a distance to walk from the Arc de Triomphe.

And you can’t enter from this area without the ticket you received the day before. Of course, you have to check your baggage here. After the check, you will be given a belt like this to show you have been checked.

Then to the stand. At the entrance of the stand, there are some receptionists. If you show your ticket here, you can get a souvenir. Well, it was just a free mug. It was just bulky. Too bad. 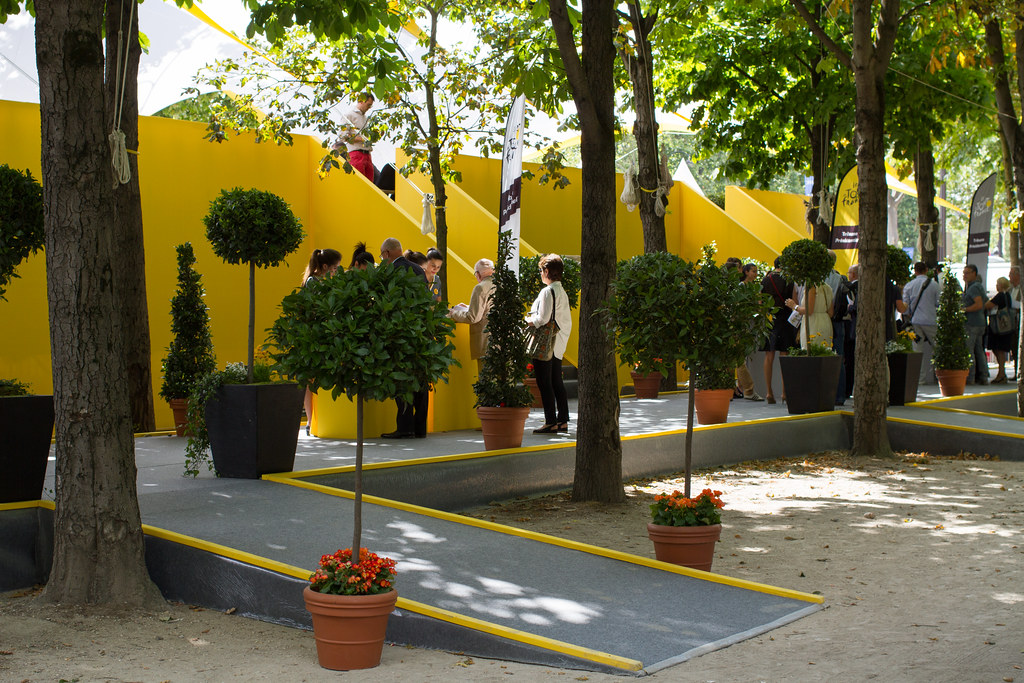 There seemed to be quite a few travel agencies involved with the official Tour de France website, and each of them had their own section of seats.

To be honest, the seats were not very comfortable as they were temporary. I was honestly disappointed that they charge so much for this quality. Well, it’s better just to be able to sit. However, it was good that you can drink as much as you want, although it was only occasionally shown by a woman handing out PET bottles. 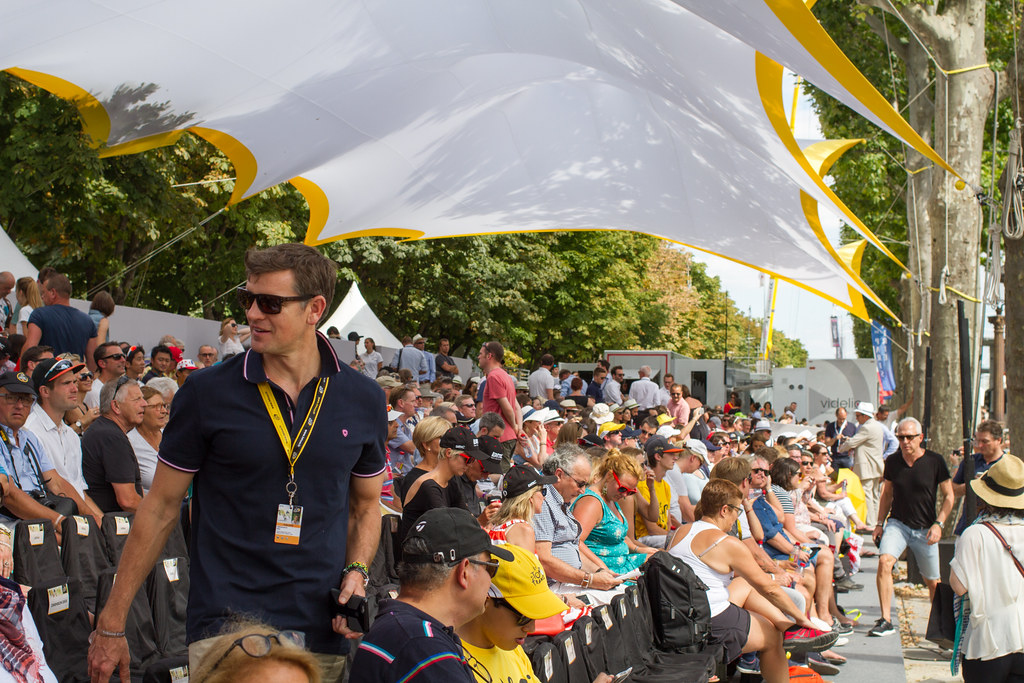 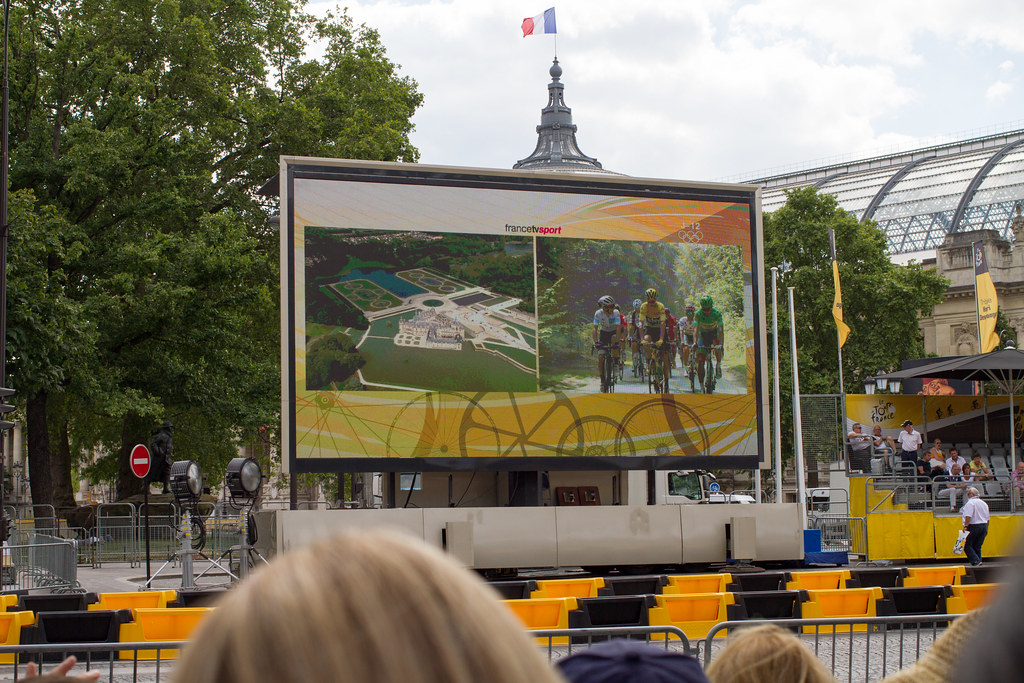 By the way, the finish line is really close by, but unfortunately you can’t see it from your seat. Can you see the sign of Vittel? I guess the camera at the moment of the goal is taken from this crane. 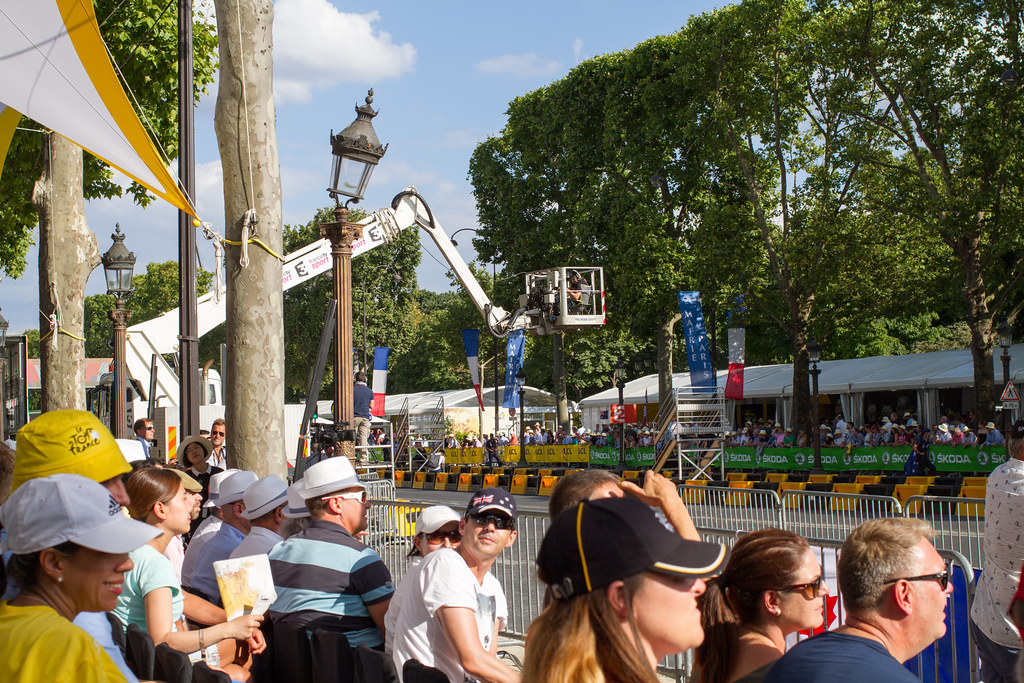 Caravans pass one after another. 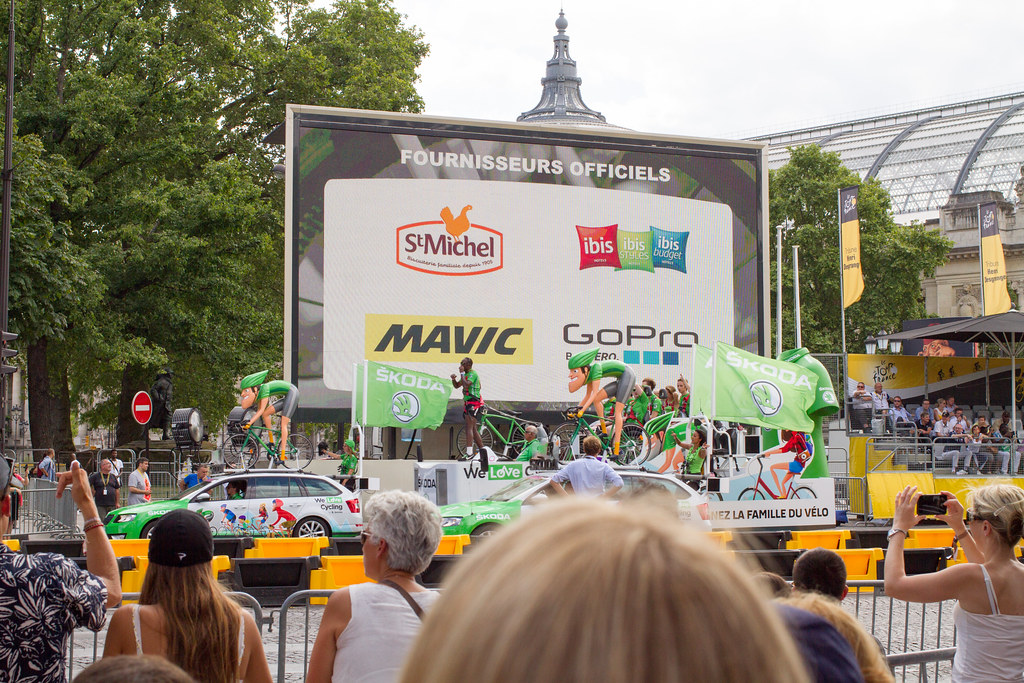 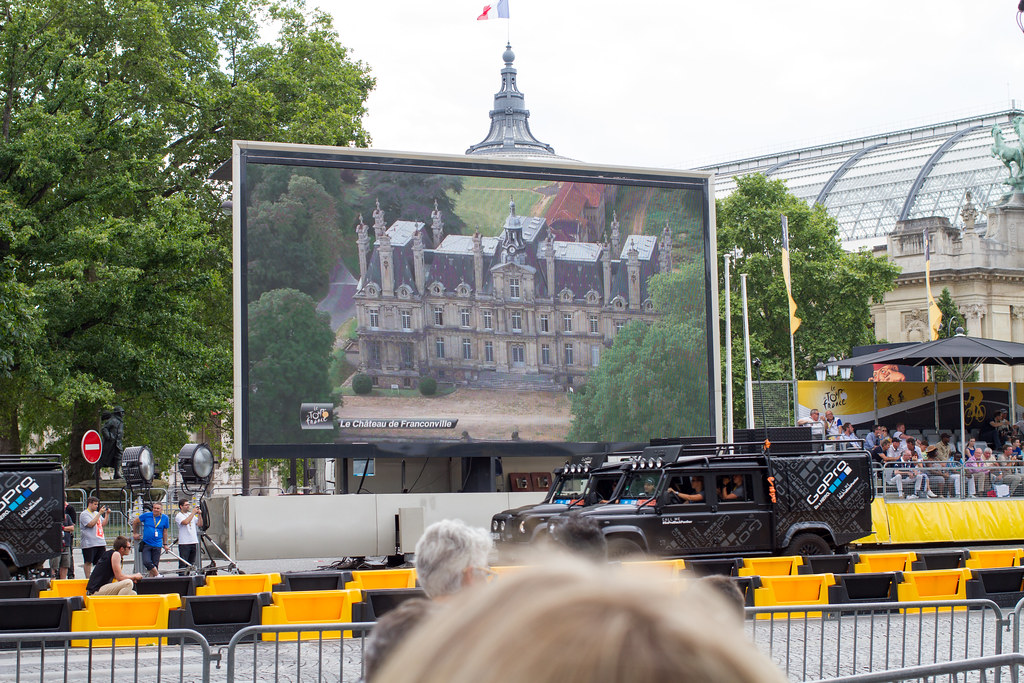 Of course, there are also non-food sponsors. Like Ibis, which you know. This is a hotel chain that operates all over Europe. They are often located near airports, so I rarely use them nowadays. 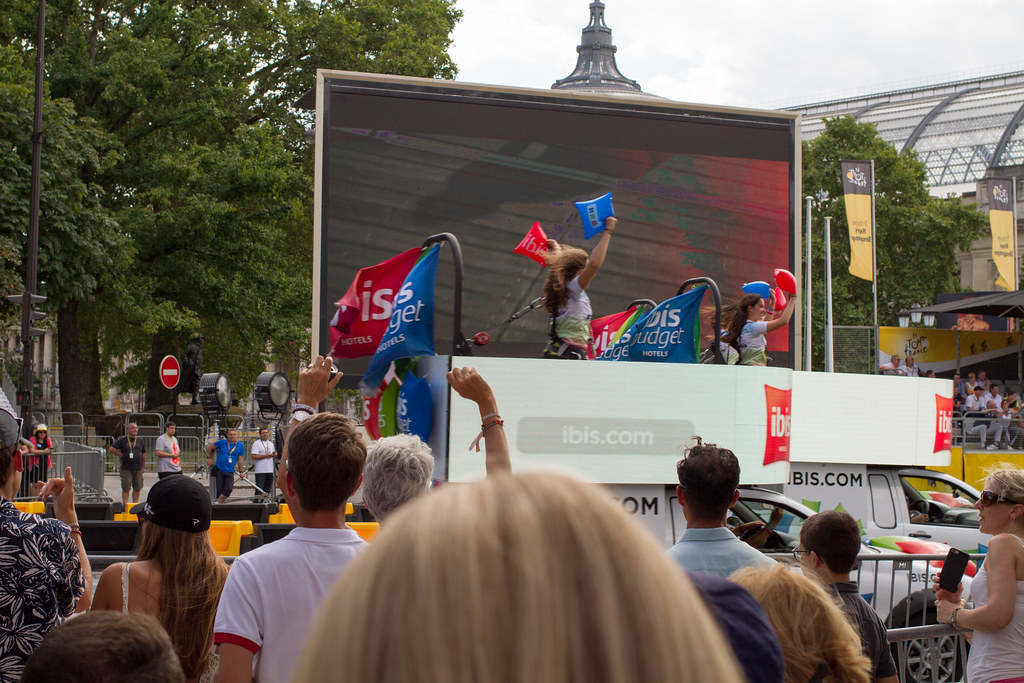 It was a lot of fun when I came, but honestly I got bored quickly lol.

Battles on the Champs-Elysées circuit

After the caravan has settled down, the venue becomes a little quieter. We were watching the big screen in front of us, playing Pokemon Go from time to time, and waiting for the arrival of the riders. We still had to wait for more than an hour because the Paris lap course starts at 18:30 in the evening.

And when the screen finally showed the sky over Paris, the audience started to buzz again. 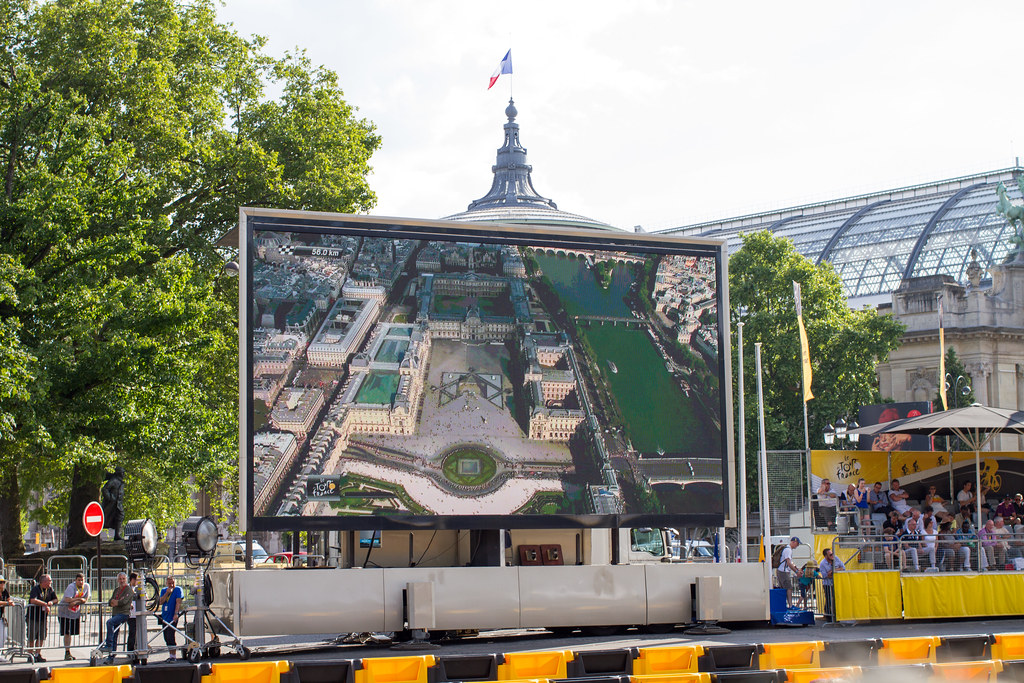 Finally, the riders entered the heart of Paris, the Champs-Elysées Louvre circuit. Gradually the cheers of the spectators approached the stands where we were.

Then a few riders ahead of me passed in front of me, and soon after that the group came. 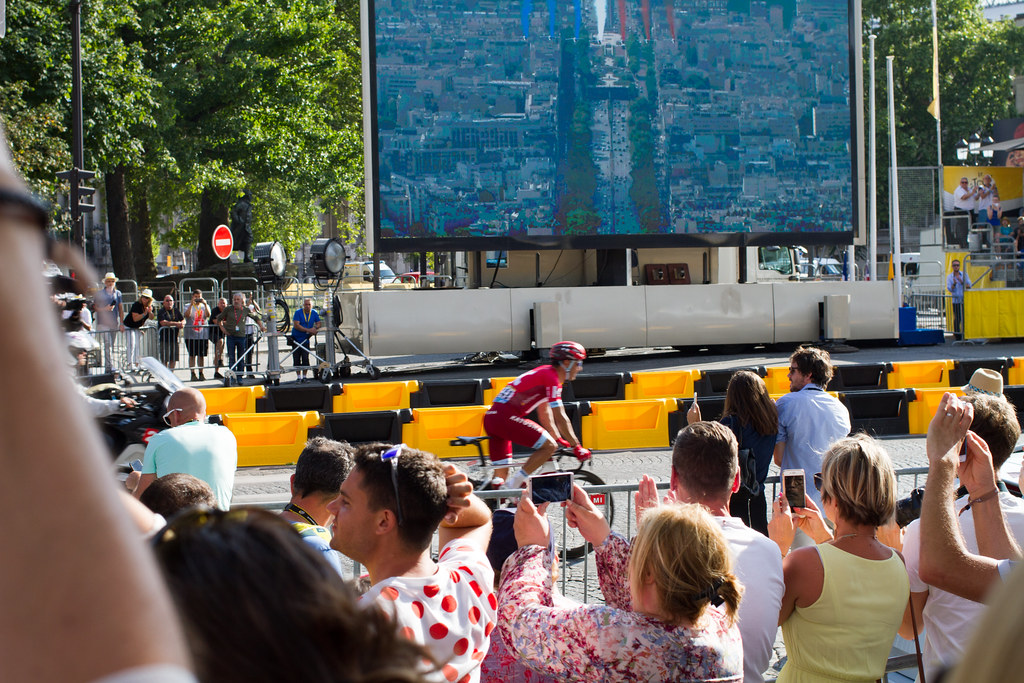 I got a good shot of Sagan in the maillot jaune and Froome at the top of the overall. Luckily they were both close to the same group. Also

Anyway, I think Sagan was conspicuous. He was often in the photos. Maybe he has an aura after all. 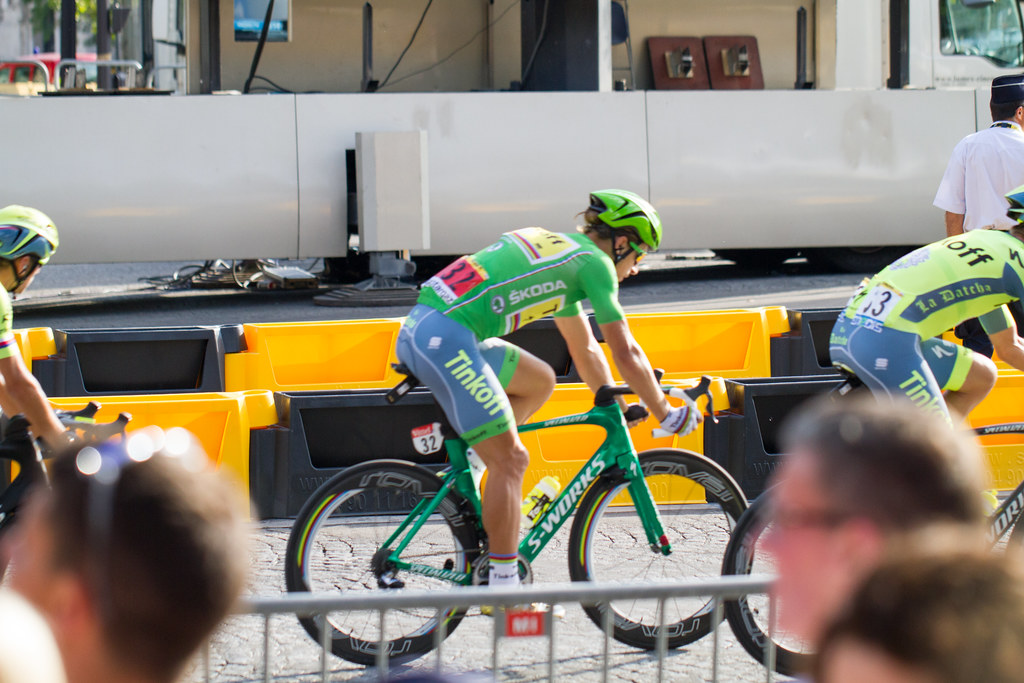 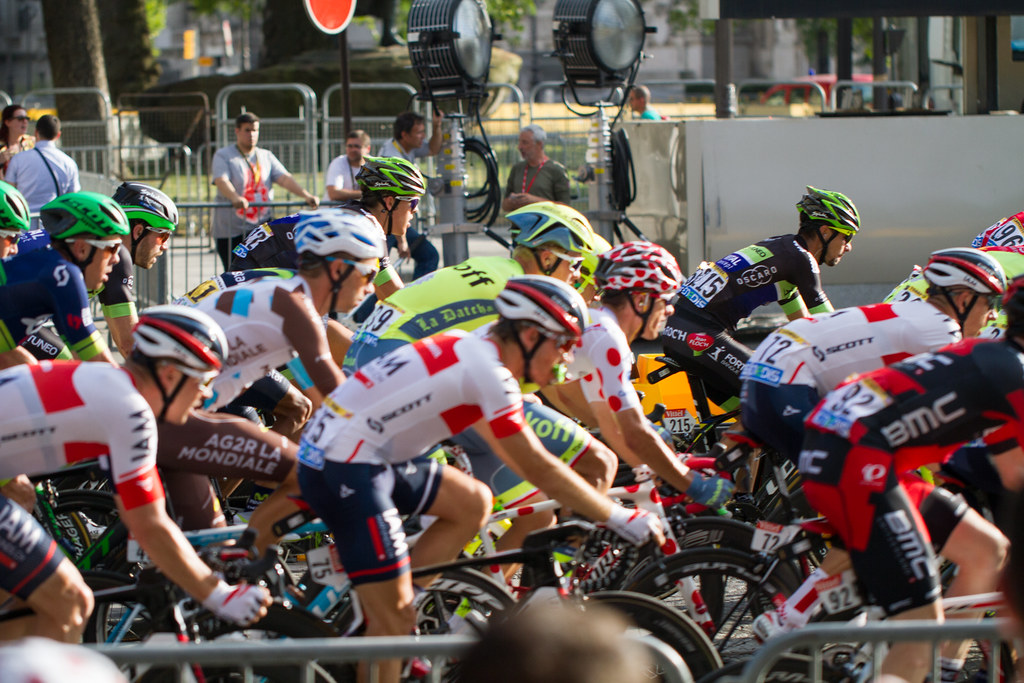 I was able to see Shinjo too. There were some people who seemed to be following him from Japan in the same stand. 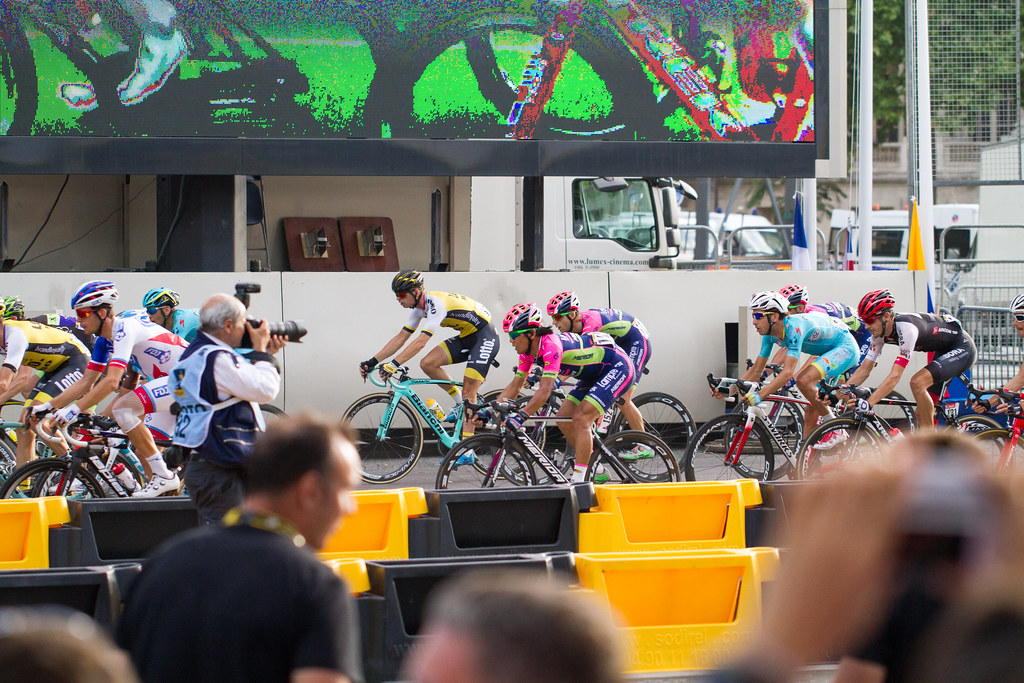 It was very sad to see Marcel Kittel, one of the top sprinters and naturally the favorite to win this final stage, break away from the group due to mechanical trouble just before the race started in earnest. 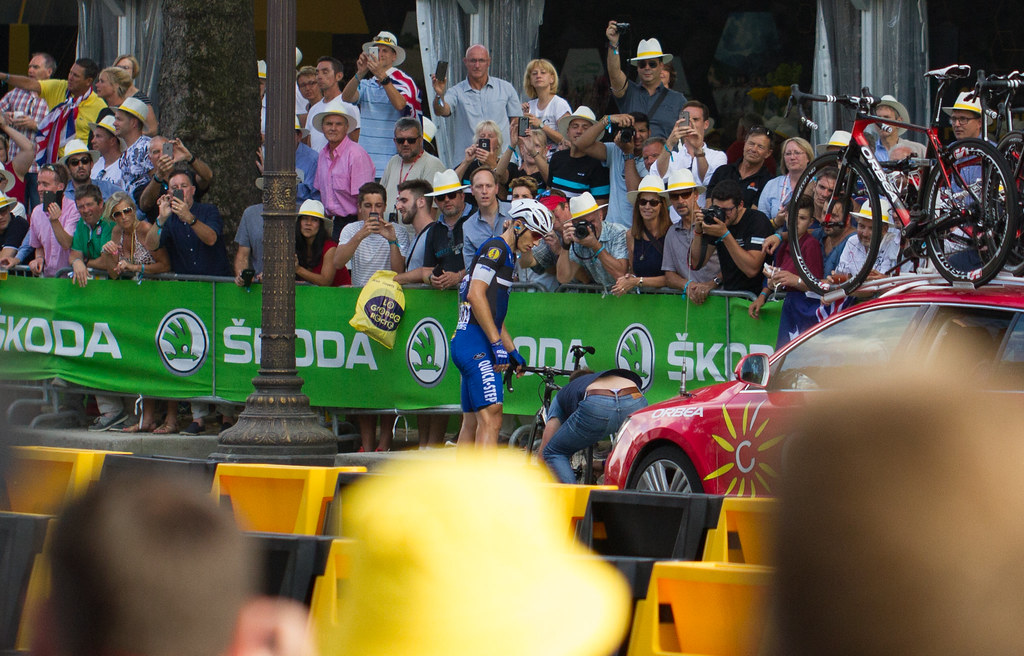 It was just in front of our stand. However, it was just after the turn from the Arc de Triomphe, in the direction to the Place de la Concorde, so it was on the opposite side of the line from the spectator’s stand where we were. At first everyone was wondering who it was, but when it was shown on the screen in front of us, everyone noticed it.

End of the race and the award ceremony

The Paris lap course really runs for many laps, so you can take as many pictures as you want. As the bell rang for the last lap, the excitement of the spectators seemed to increase.

Unfortunately, we couldn’t see the moment of the goal, so we watched the race on the screen in front of us. Of course, you can hear the excitement and the sound of the bicycles right there, so the sense of realism is incomparable to watching on TV.

It was Greipel who won the final stage of the day. After all, Kittel managed to catch up with the main group due to the trouble that occurred on the way, but could not win in the end. Sagan finished 2nd, it’s amazing to see him come out on top.

Please refer to the official website for detailed results.

And a summary of the final stage can be found here.

At the moment of the goal, I couldn’t take any more photos because I was surrounded by a whirlpool of excitement.

And the award ceremony. It was held at a somewhat remote location, but I could see it clearly with the naked eye and through a telephoto lens. I remember very well Flume’s victory speech, in which he mentioned the Nice incident. 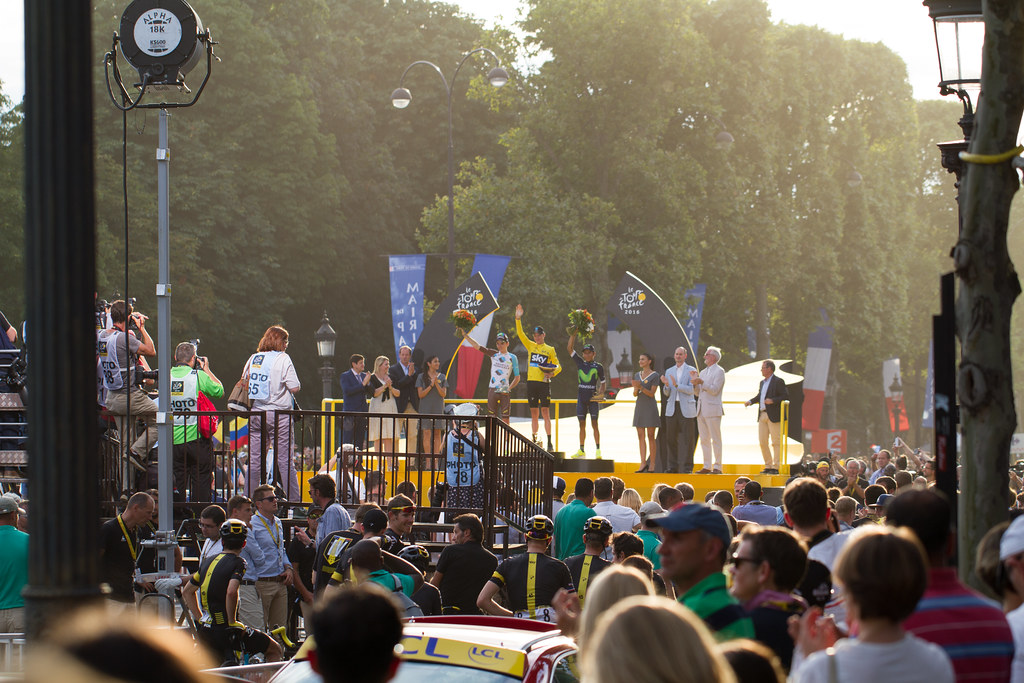 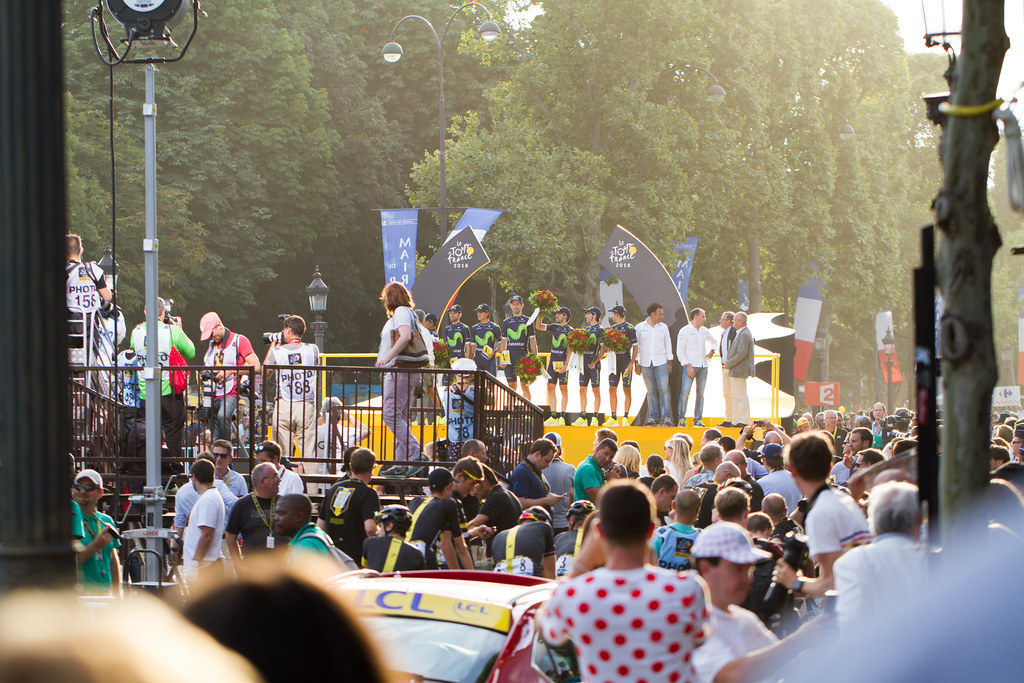 After the awards ceremony, I was on my way home. I took the subway back to Saint-Germain-des-Prés where I was staying. Of course the metro station was crowded, but not as much as I had expected, and I was able to return to the hotel without any delay. It was a long day of watching the game, so we had a light dinner in the area near the hotel.

I had been longing to watch the Tour de France for many years, and to be able to do so on the final stage was a great feeling. The expense was more than I expected, but it gave me another unforgettable memory of France. The next time I get infected, I think I’ll take it easy on the mountain stages or the regular regional stages. And don’t spend too much money lol.

I've learned about a lot of different beers over the past decade or so, but lately I've been going back to the classic "...