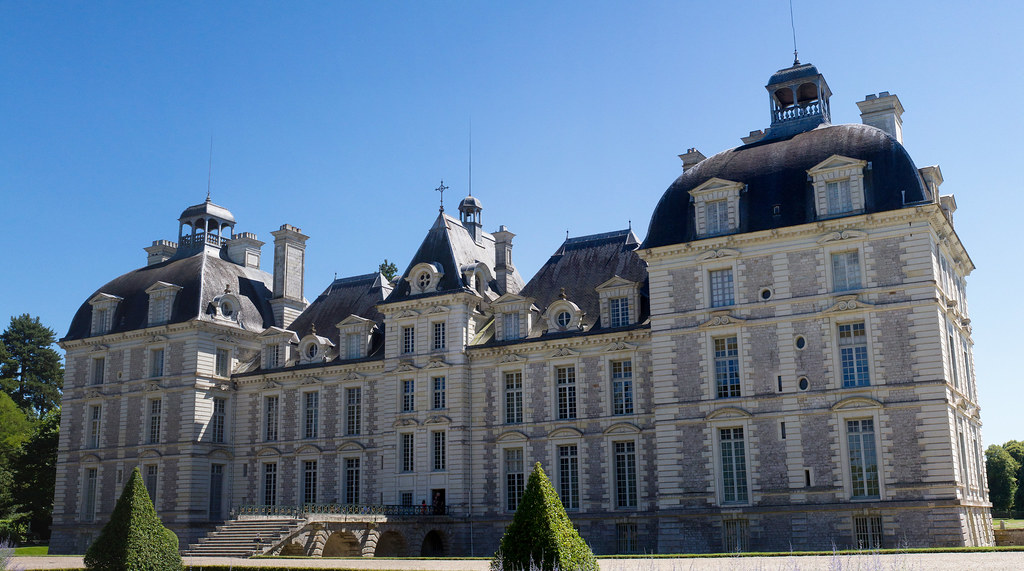 Loire Valley is the origin of European driving

I met up with my wife and our first stop was the Loire Valley. We spent the whole day in Loire. Of course, I had to visit the world heritage castle, but the other main thing was to stay at the Auberge here. I wrote about the auberge in detail in the following article.

This is the third time for me to visit Loire region. It was my first time in spring 2006. The second time I visited there was for the tour of the most beautiful villages in France.

I don’t know why I’ve never been to Cheverny.

So I’ve been to Loire several times, especially the first time I stayed more than 3 nights and visited many castles, but I’ve never been to Cheverny for some reason. I thought it looked ordinary from the photos, and it might be just a coincidence that it wasn’t located in an easy and efficient route. Other castles are also scattered here and there, but they are a bit plain compared to Chambord or Chenonceau.

But Cheverny is one of the most popular castles in the Loire Valley. So I decided to visit there at least once. 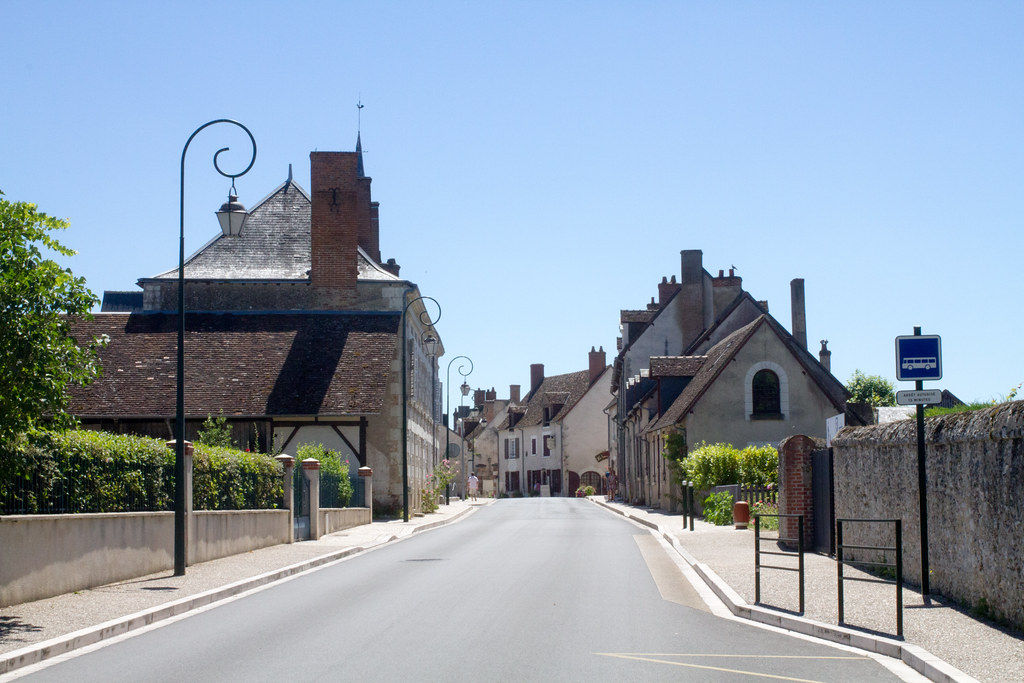 What kind of castle is Cheverny? 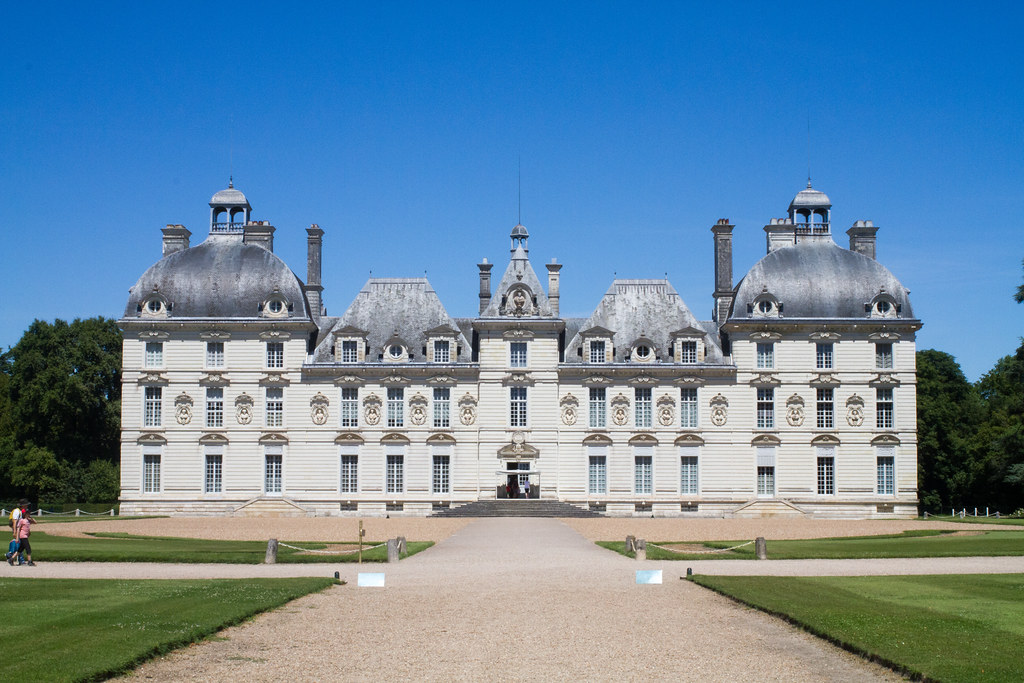 Cheverny was originally built around 1500 as one of the fortresses of the land, and a new castle was built between 1624 and 1640 by Comte Henri Hurault, when he married the queen Marguerite Gaillard. Since then, it has been built twice. Since then, the château has been owned by the Hurault family, although it has been almost taken over by others twice. It is of course a private residence, but it was opened to the public in 1922. It is said that the descendants of the Hurault family still live in the castle.

There is a picture frame in the garden. Please take a memorial picture. 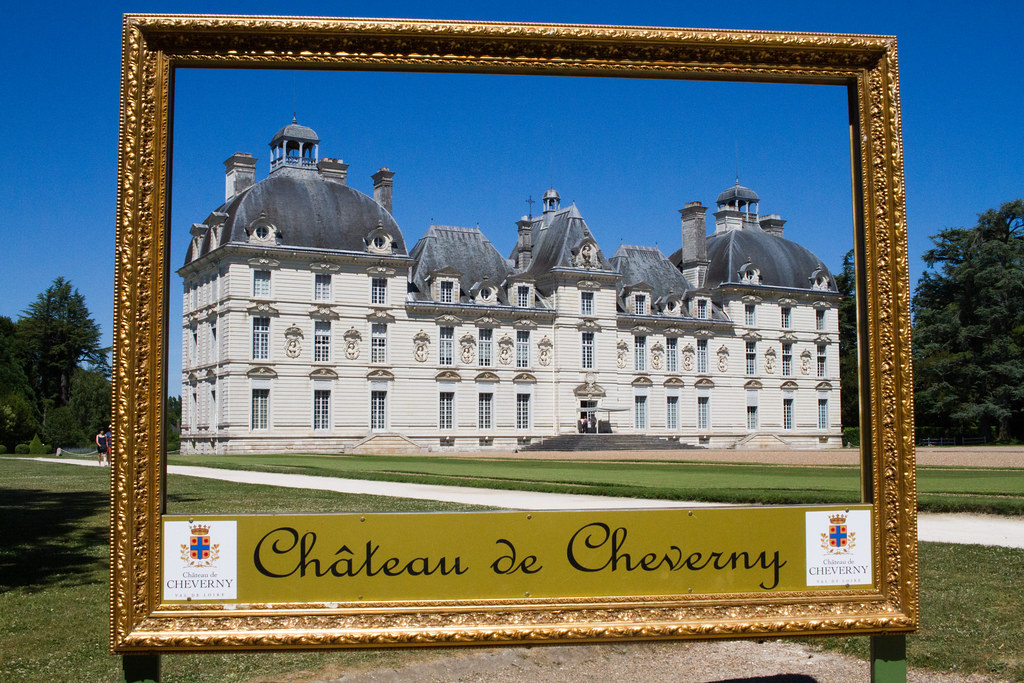 The brochure has detailed instructions on where to go.

At the entrance of the castle, pamphlets in various languages are distributed for free. Japanese version was also available, but I got French version for my study.

On the top of the first page of the brochure, there is a brief history of the castle. At the bottom of the page, it says « enter on your right (A DROITE EN EN ENTRANT) ». There you will find the dining room (La Salle à manger).

It was very easy to see the sights because it was written with specific instructions, such as « go up the stairs to the upper floor, » « go to the right, » and so on.

By the way, the « Do you know? (LE SAVES VOUS?) », which is written in each section of each page, was interesting. For example

It was written in the book. Especially in the past few years, I’ve been trying to read the pamphlets and local descriptions carefully. It is difficult in French, but I would like to continue to do so for my study.

Typical castle interiors from the 17th to 19th centuries.

Now, the rooms in the castle, all of which seemed to date from roughly the 17th to 19th centuries. I’ll introduce them in no particular order.

First, the king’s bedroom. As I mentioned earlier in the « Trivia » section, kings in those days did not sleep lying down. Because of that, the length of the bed is shorter than I expected. 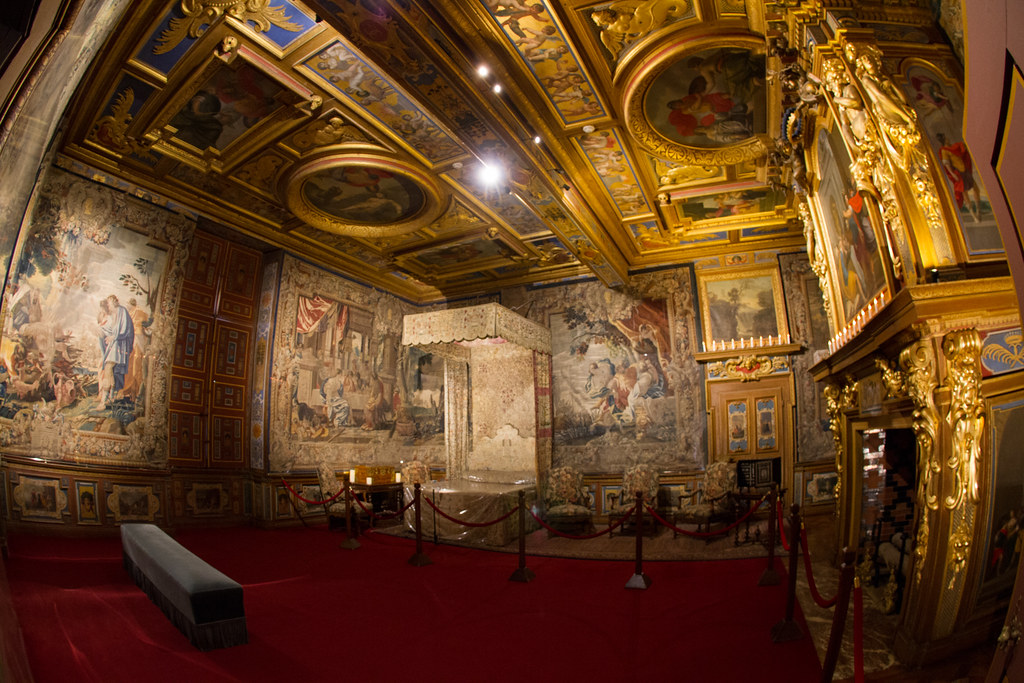 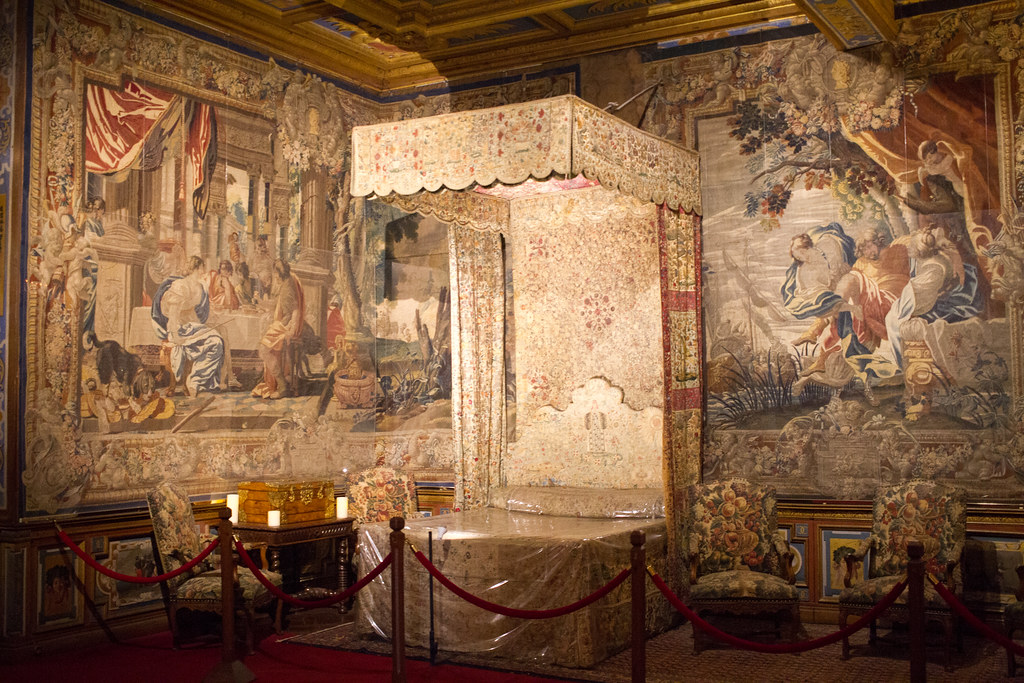 This is the weapons room. Even today, there are such displays in various castles, but it seems that this culture already existed around the 18th and 19th century. 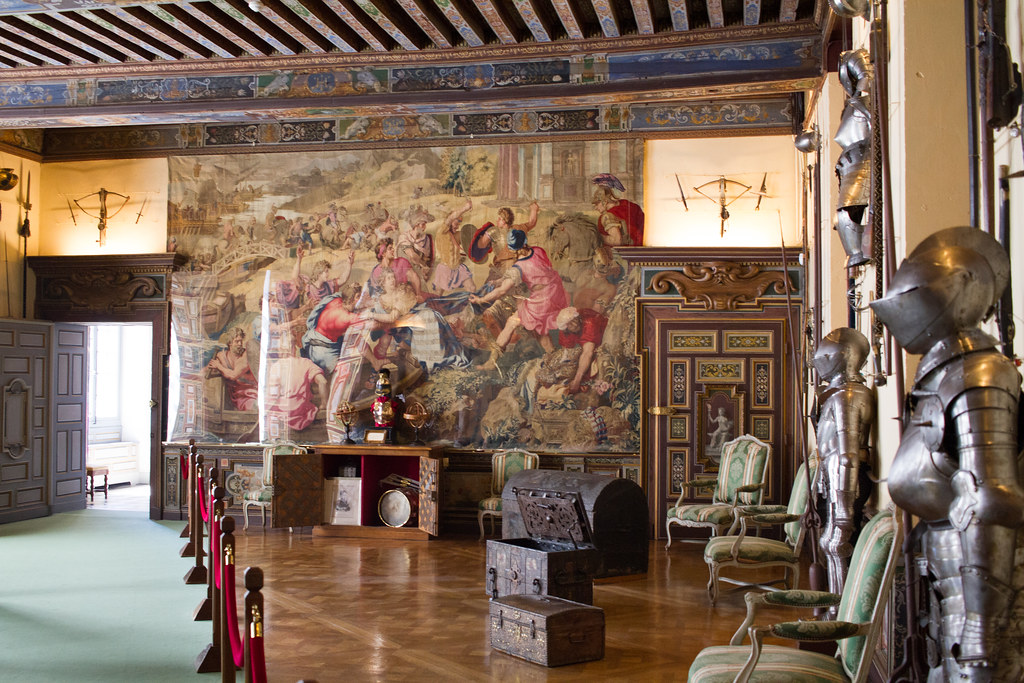 There was a chapel in one corner of the top floor. It is said that it started to be built in the time of Louis XIII, but it was eventually completed only in the 19th century. 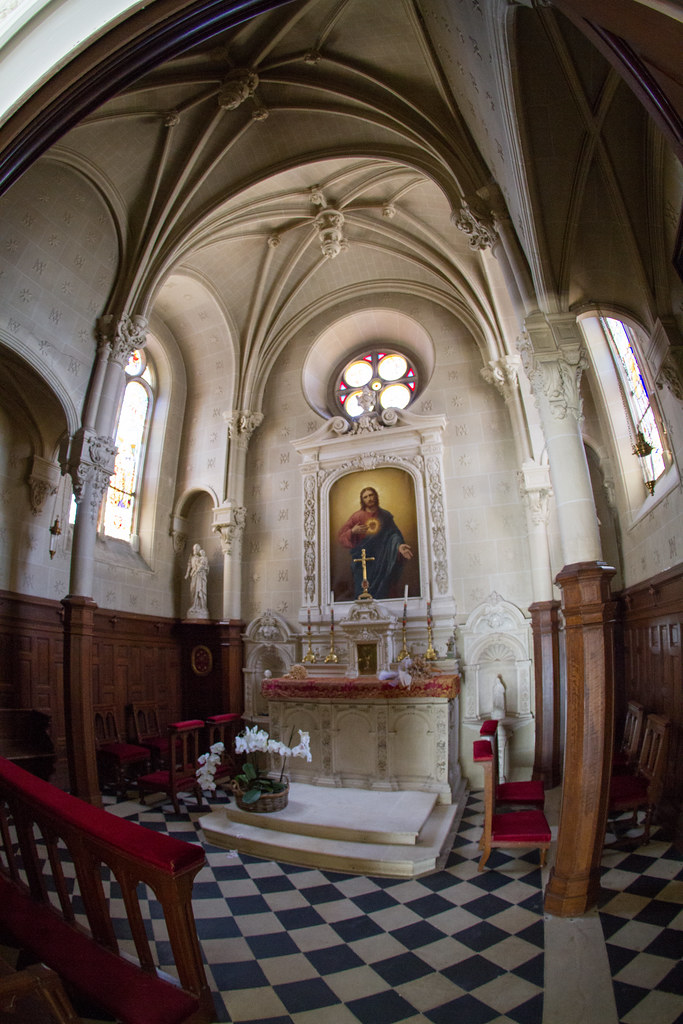 I love the collaboration with Lego!

By the way, when I visited there, a collaboration with Lego was being held for a limited time.

When I bought an admission ticket, I got a leaflet like this.

I think it is obvious what it is by looking at the following pictures. Do you understand? 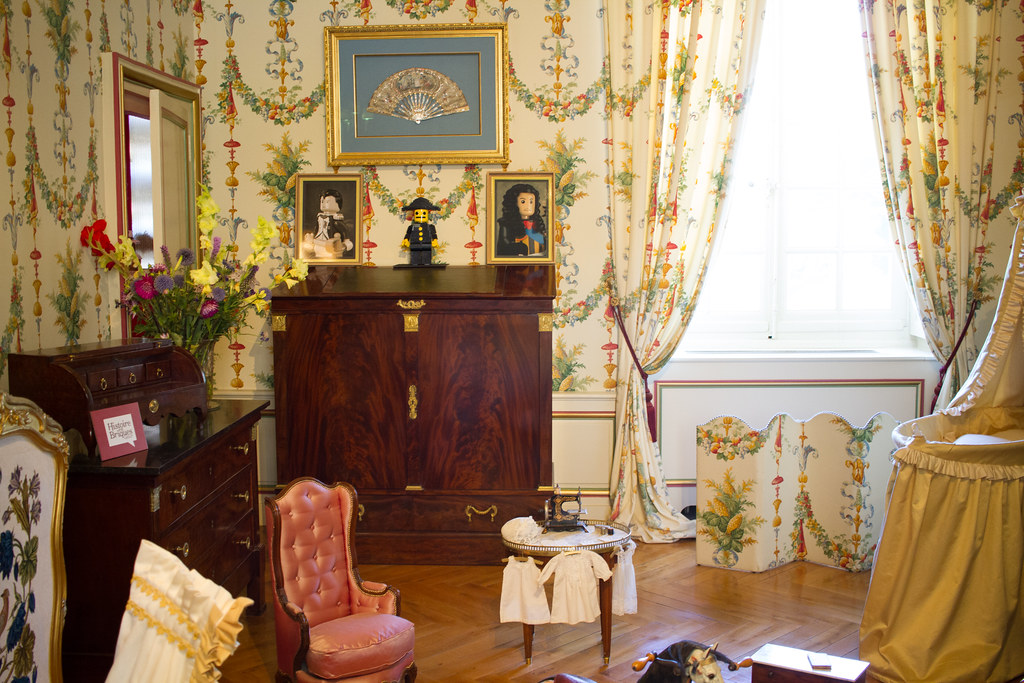 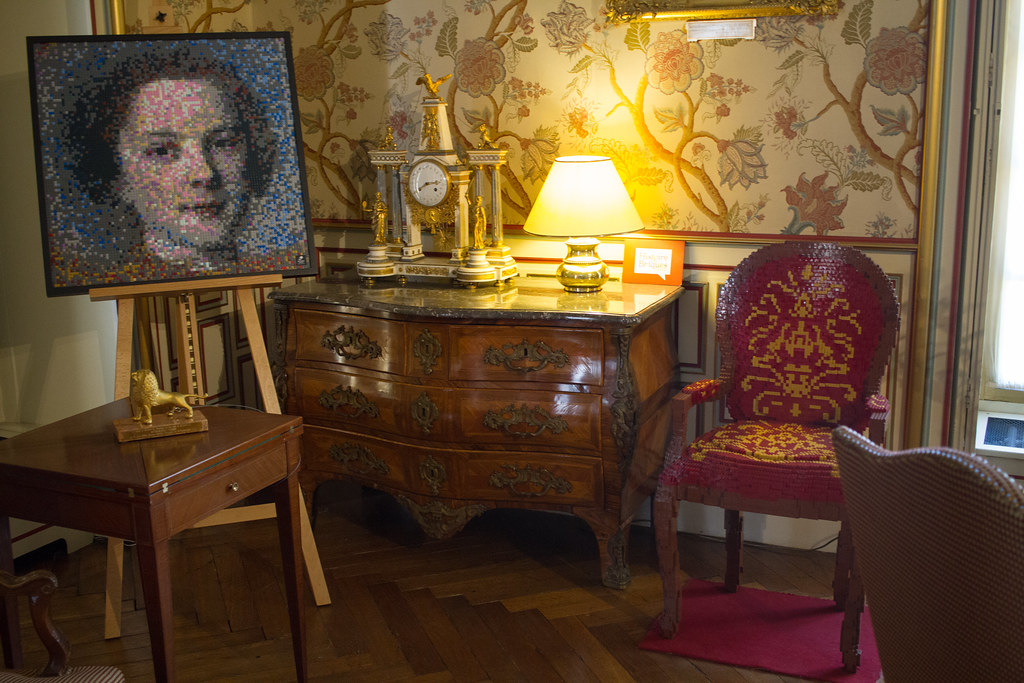 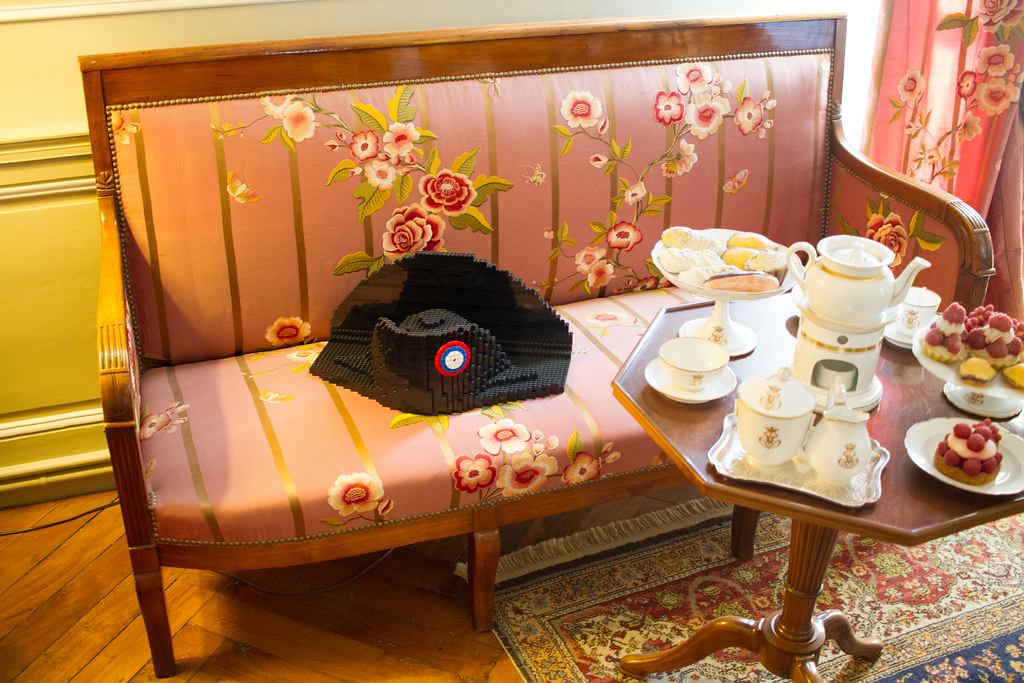 Like this, a part of the interior was made by Lego and displayed. The information of how many Lego pieces it was made of and how long it took to make was also explained on a board nearby. This is a very interesting experiment. 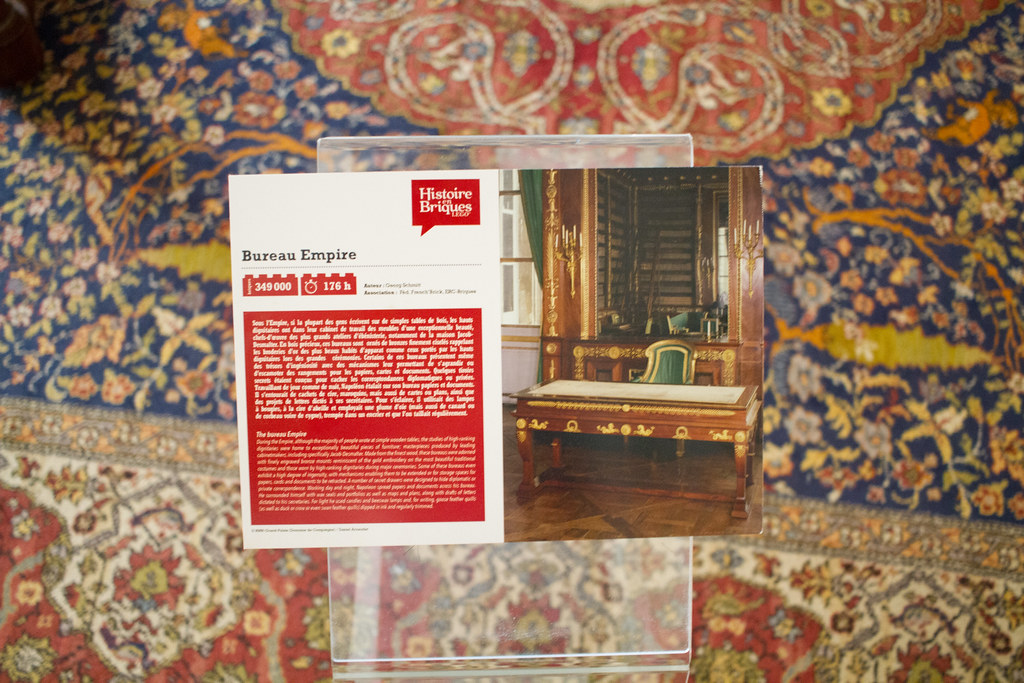 However, some of them are so authentic that it’s hard to tell at first glance. 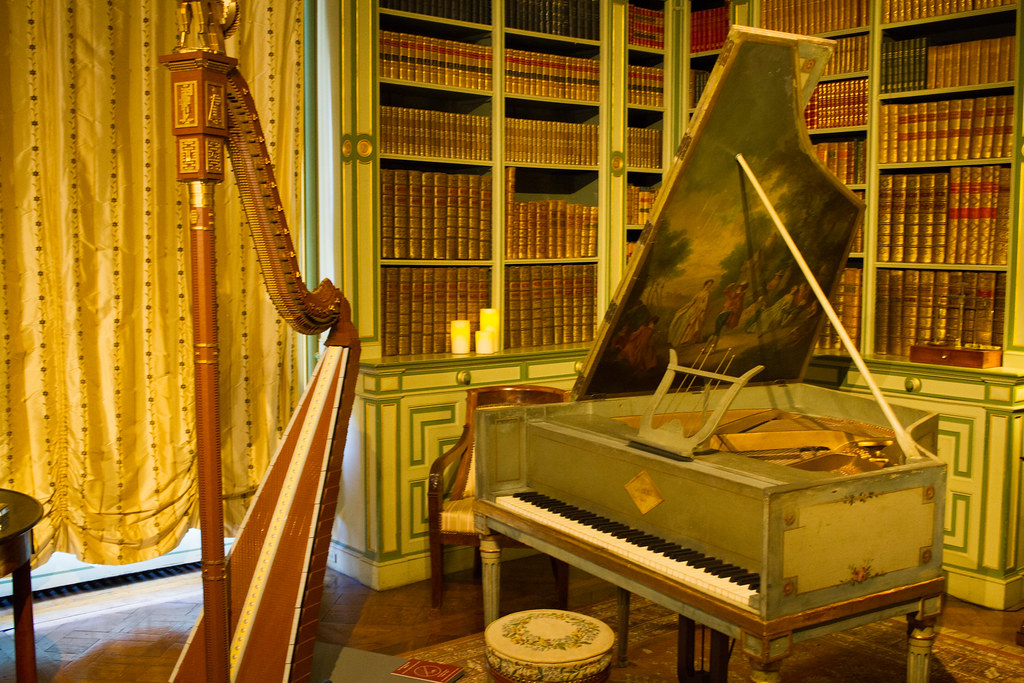 Actually, the harp was made out of Legos! This was amazing. 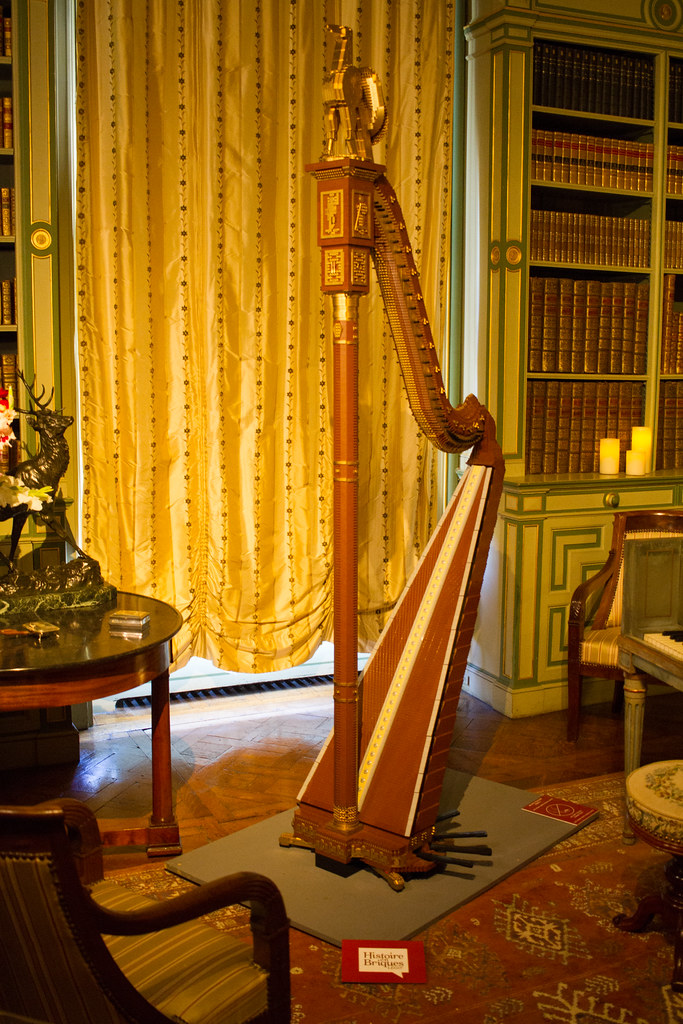 There was also a model of a castle made by Lego on display. Nice work here too! 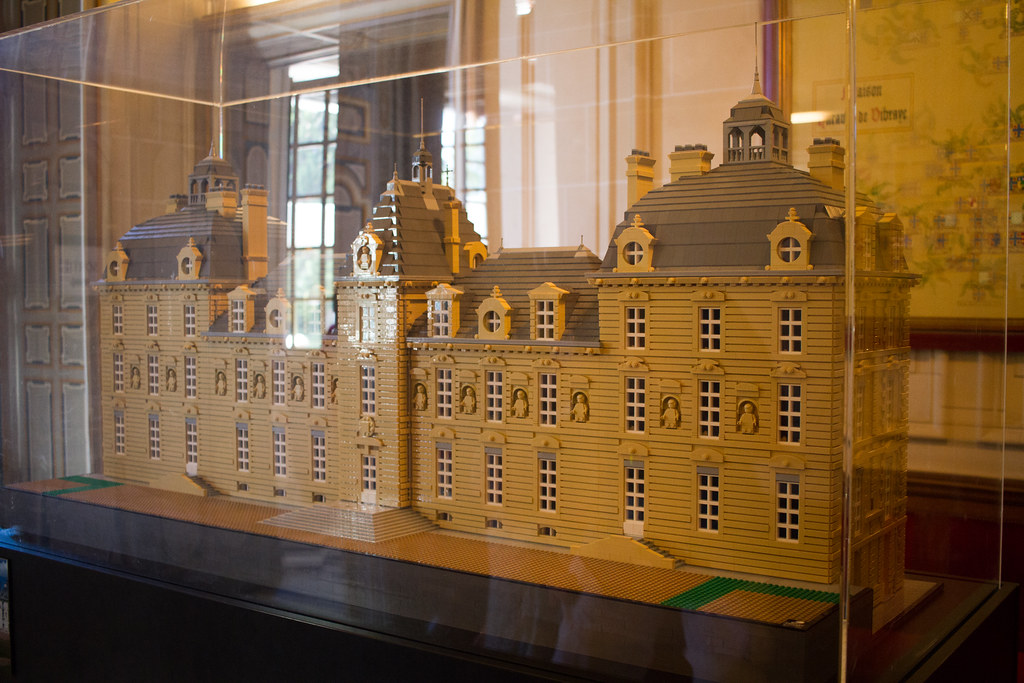 If you look at it up close, you’ll see that it’s really Lego! 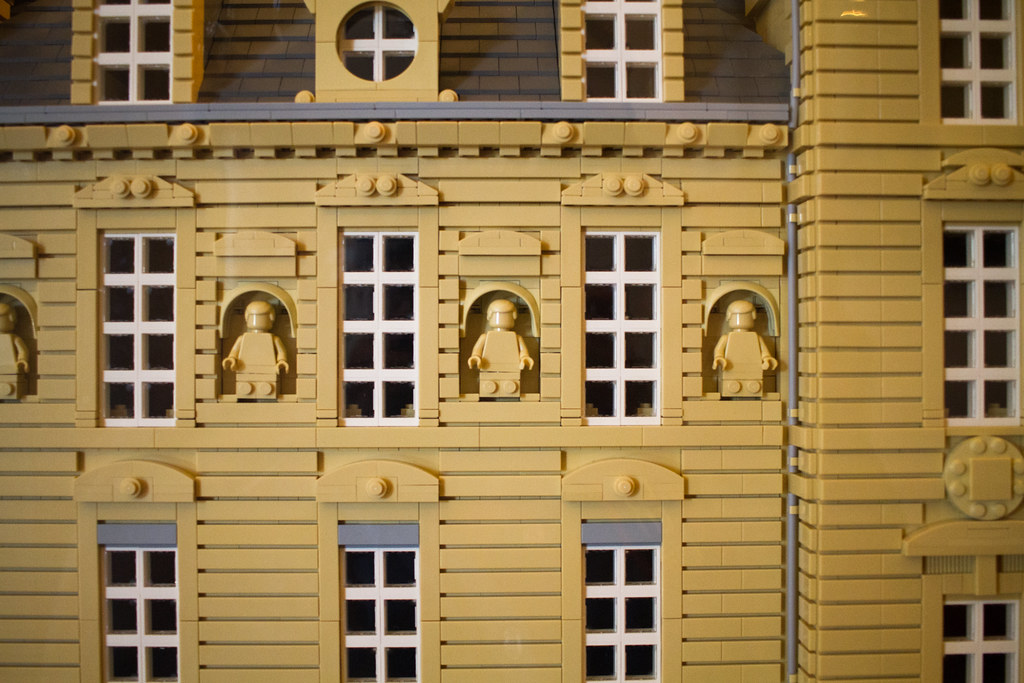 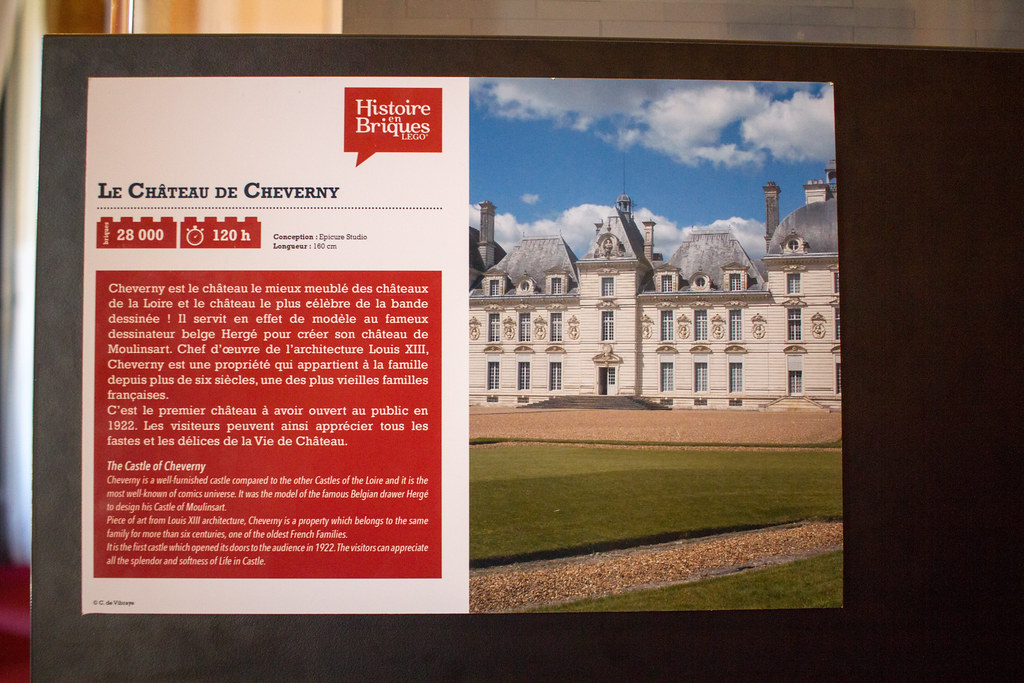 Finally, take a break at the Orangery cafe.

After walking around the castle, we went to the garden. We went to the Orangery (the place where they used to grow oranges), which is now a cafe. It was hot and I was a bit tired, so I took a rest here.

By the way, there was a description of « Tarte Tatin » inside the Orangery. In fact, it is said to have originated in a hotel in a small town around here. For more information about this area, please search on Google.

An illustrated book of French pastries, that’s part of the learning curve!

I saw this book on twitter the other day and couldn't resist buying it.フランス菓子図鑑 お菓子の名前と由来Yukiko Omori世界文化社 2013-07-19Sa...

Date of visit: April 23, 2011The last village of the day is "Ségur-le-Château" in the Limousin region. It is a beautiful...

Date: September 21, 2015「Google Timelineによる軌跡」We entered the Dolomites a day ahead of schedule because of the weather.In...

From Normandy to Brittany – 2011 France Realtime No.5