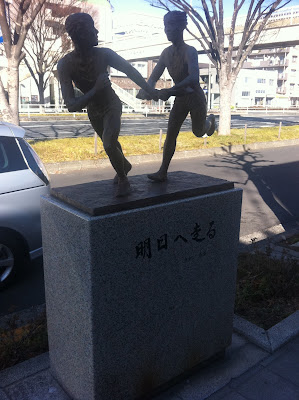 The Hakone Ekiden, a New Year’s tradition, was held again this year.

But I wonder, it’s getting more and more boring every year. I wonder if it’s just that I’m personally getting bored…

Toyo University won the championship completely this year. They made up for last year’s loss. Not only Kashiwabara, but also each member of the team had different enthusiasm. They won the sectional prize and were impeccable in the race. Congratulations to them.

By the way, Kashiwabara is amazing.

However, since the winner was confirmed early in the return trip, it was not as interesting as it could have been.

But if anything, this boringness itself is a very good thing.

When I look at the past, Juntendo University was too strong 20 years ago when I started watching TV broadcasts. Compared to that, I think it’s still better. I don’t know much about it, but if you go further back in time, it seems that Chuo University was also strong.

So, I think it’s no problem that the history of Hakone has overwhelmingly strong universities themselves, or rather it’s natural because it’s a competition.

What I was rather curious about was what was happening behind the scenes of this crushing victory.

The battle for the seeding rights doesn’t really come across well when watching the screen.

In recent years, the seeding competition has had a very important impact on the excitement of the Hakone Ekiden.

While most tournaments only focus on the championship, I think it’s great to have a main body that can feature the seeding as entertainment. This seeding competition is certainly exciting with its drama, isn’t it?

This year, however, the seeding battle is not so easy to understand from the TV screen.

Toyo University was too strong, and there were too many schools starting at the same time on the return trip. In addition, the 10th place and below were in a dumpling state, and the change of the order at each checkpoint was intense.

I ended up watching the breaking news online instead of on TV.

The downside of having more schools in the competition?

I think the reason for this confusion and complication is probably the increase in the number of participating schools to 19. 10 years ago, there were 15 schools. Of course, there was no Kanto Federation of Schools selection.

In recent years, the ability of each university was very close, and there were not so many schools that started at the same time on the return trip as this year, and even if there were, they were not so far behind the leaders.

Even in this day and age, it wouldn’t be much of a problem if we gave up broadcasting focusing on seeding contests.

However, it goes without saying that Hakone Ekiden is not only a championship race but also a seeding race. Therefore, it is essential to be able to organize and broadcast the complicated situation of the seeding competition.

A broadcasting style that hasn’t changed in over a decade

But the timing of the car changes, the same commentators every time, the same old stories that seem to be running out of material, the same noisy play-by-play full of unimportant rhetoric, and the same company commercials.

The relay itself hasn’t really changed from the past. We’ve been broadcasting the same thing for about 19 years now, or even longer. If you make a mistake and play a VTR from last year or the year before, you might not even notice.

I think the broadcast itself is in a huge rut.

I thought that perhaps the relaying know-how had not improved much.

I think it has a lot to do with the fact that the above broadcasting style hasn’t changed, but this time, I think the switching of the broadcasting van was particularly poor. Who did they want to show?

This happens every year, but sometimes the top positions are not conveyed when you want to see them. The current overall rankings, the rankings of the universities you are rooting for, this kind of information is completely impossible to grasp on TV.

I was reminded once again of the limitations of television, which can only communicate from a single point of view, and that most of the equipment that can be broadcast on television is wasted and goes unused.

Still, we’ve been able to leverage our website in recent years.

Nevertheless, the trend of the times is that information transmission via websites has become much more convenient over the past few years.

What I often look at is the page of the preliminary report of the measurement points that there are about four in one section. It’s very convenient to know in real time in which order and how much time difference you have in front of Yokohama Station. Of course, you can see the names of universities and athletes.

Recently, I’ve been watching the games on TV and checking out the breaking news on the internet, which is quite interesting.

A friend of mine happened to be at the Tsurumi relay station today, and he was broadcasting live from the scene via tweakath, but the most useful information I could give them was from the Nittele Hakone Ekiden website.

I also had a friend at the start yesterday who was also tweaking from there.

It’s surprisingly easy to just slack off on this one.

I’ve been watching tweakers and Ustream broadcasts from a variety of perspectives. I’ve come to think that this style of spectating is more flexible and interesting.

By the way, twitter is also effective, but unfortunately at this point, I think that in many cases, it is simply a live TV show.

In any case, it was a pity that the TV medium was not fully utilized at all despite the exclusive coverage.

The concept of television no longer suppresses the diverse needs of viewers. I think there was a lack of interest, especially when it came to communicating the seeding competition.

Even if we have to be centralized in the traditional way, we are in a situation where we feel limited and frustrated with TV because we know each individual’s view through social media such as twitter, Ustream, and tweets, not to mention the Internet. That’s the situation.

It was the first time in a long time that a university ran the race on its own, and I thought that the negative effects of the enlargement of the Hakone Ekiden, which I had not noticed in the past 10 years, and the problems of the media, which could not keep up with the trends of the times, became visible at once.

Hakone Ekiden, which has come to smell like a bubble in the first place

Even so, in the midst of this economic downturn, they are spending a great deal of money to broadcast the event. On the three New Year’s days, the TV station staff, police, and volunteers are all working very hard, and of course, the traffic regulations are tremendous.

At the moment, it seems to have a big sponsor, and judging from the state of Hakone-cho, I think the economic effect is enormous, but I feel a little uneasy when I imagine how long such an economy can last in the modern age.

Still, as long as the crowd supports him immensely, he will be able to continue.

However, no matter how you look at it, I think there is no doubt that this enlargement is a movement that goes against the times. Considering the economic situation and other factors, I think it will be difficult to continue to operate on a large scale and with a lot of money.

Even so, the Hakone Ekiden, a major national event, is still interesting.

As a fan for more than 20 years, I will definitely be crazy about Hakone Ekiden again next year. I hope the problems I felt again this year will become a little better so that I can enjoy watching the race more.

Once again, congratulations to the players of Toyo University for winning the championship.

What I try to do when I wake up

When I look at Twitter, I see that everyone always looks very sleepy on weekdays, and there is hardly a day when I don't...

It is now 2015. We hope you will continue to visit our website this year. I'm sorry that I only have these pictures of s...

I participated in the Yokohama Marathon 2016!

It's been a little while, but I participated in the Yokohama Marathon on March 13, 2016, and finished it successfully.エン...

Why did I think this? Here's a quick explanation.今週iOS8.1にしたらワンタイムパスワードアプリが起動するもすぐに落ちて使えない状態になった。おそらくiOS8アップデートした直後から使えな...
Marseille No.5 To the sea – 2011 France Autumn
Transition to a Minimalist Lifestyle In light of the future stagnant Japanese economy
Page d’accueil
09. Sports
タイトルとURLをコピーしました