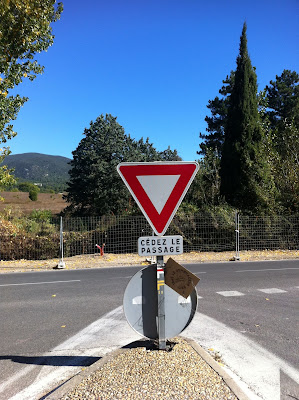 Basically, there is an international standard for road signs all over the world, so many of the signs have roughly the same meaning as the ones you see in Japan, but I think this one is probably not a Japanese sign.

This is a sign that you can see in many European countries.

The fact that it is not a pause is very important and very reasonable.

(*By the way, there are priority road signs in Japan, but not in this shape. I don’t think you can see them very often.

Probably in Japan, such a place where this sign stands is definitely « one stop ». If there is a lot of pause in vain, it becomes stressful to drive, isn’t it? That’s why it’s irritating.

Of course, there are stop signs in Europe too. But I feel that there are quite few.

In other words, if there is no car coming, you can go ahead non-stop as long as you check properly.

I believe that a proper understanding of the « rationality » and « efficiency » implied by these forward priority road signs is a prerequisite for smooth driving in Europe. It’s just a combination of

In short, you just have to give way when a car comes from the left. It’s not a difficult technique, but it’s a basic technique for driving a car.

All you need to understand is that there is a concept called « forward priority road/slow speed » at the base of it. If you know the basic structure, it’s easy! It’s not a big deal. 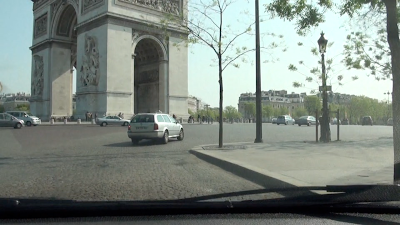 It’s a small thing, but I believe that if you understand well the meaning of « forward priority road and slow down », you can have a very comfortable European drive.

I often see on the internet that « in Europe, the right side has priority ».

However, in my experience of driving in Europe many times in the past, I hardly remember encountering a situation where the right side of the road has priority because there is nothing to tell which side has priority.

I don’t think you see many crossroads intersections without signs or signals in places where there is a lot of traffic to begin with.

Of course, it is not absolutely impossible. However, if there is a crossroads-like intersection without signs or signals, it is likely to be a back alley in a city or a rural village.

Since people are walking and you can’t drive without slowing down normally, you can stop immediately no matter which has priority. Therefore, it is unlikely to be a problem.

This may be a story limited to Western Europe. I think it is especially noticeable in France.

Travelogue for May 2013. The Corsica diary continues.While much of the island is mountainous, the area along the east co...

Date of visit: April 30, around 12:00 a.m.Before you know it, it's already midnight. The third village in Alsace today, ...
Buy iPhone 4S! From Softbank online shop. It was smoother than I expected.
Sainte-Agnès – Tour of the most beautiful villages in France 2011 No.48 -★★☆☆☆
Page d’accueil
10. Hobby General
drive
タイトルとURLをコピーしました