It was May 1st, the day of May Day, and I had only two days left for my trip by car. This time I am using the company’s long vacation system « Refresh Vacation », so it is a longer trip than usual.

Even though I’ve been able to enjoy myself to the fullest, I’m about to run out of things to say… After wondering where I should go, I chose « Luxembourg ». But it’s not so far. If we don’t take a detour from Nancy, where we stayed the night before, it’s about an hour away.

Before departure from Nancy. After all this time, I learned about the panorama photo function of NEX-3…. I wish I had used it sooner.

Well, it’s supposed to be useful in Paris and other big cities.

On the way to Luxembourg, I dropped in at a big town called Metz. My purpose was to visit the Pompidou Center annex which was just completed last year, but it seemed to be closed on May Day, so I walked around the town lightly. It was a lovely old city that was very well managed. I definitely want to visit the Centre Pompidou and will stop by again tomorrow (i.e. today) when I return to France.

After leaving Metz, our next stop was Rodemack, a beautiful village close to the Luxembourg border.

It’s the entrance to the village that gives me hope, but… The village itself has a « gotcha » vibe…. Quite a disappointing atmosphere. There were really no points to take pictures. I almost didn’t take any pictures. Well, that’s one of my memories.

From Lodomak to the Luxembourg border takes about 10 minutes by car, or so. I entered Luxembourg easily, and the first place I went was « Schengen » which is familiar with the agreement. It took about 10 minutes by car to get there. 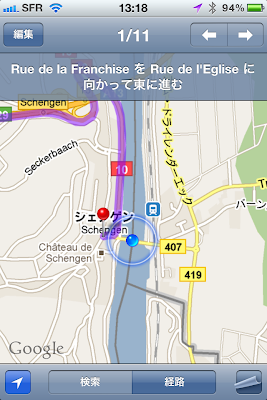 The Moselle River divides the country into Luxembourg and Germany. France can be entered if you go slightly south from this point. It is a strange feeling that you can go back and forth between three countries in only about five minutes. I was able to use the French spec MiFi in places. It’s interesting.

Now we started sightseeing in Luxembourg. We passed through Luxembourg City because we went there the other day, and came to the north at once. It is a small country even if I say at once. It took only one hour from Schengen to the north. It is very close to Belgium.

First of all, the town is called Vianden (Vianden). It doesn’t seem to be Vianden…. I heard that it is famous for its old castles, like the picture at the beginning. The northern part of Luxembourg and the southeastern part of Belgium are called Ardennes region, where there are many nice old castles. Due to time constraints, I can’t visit the Ardennes castles on the Belgian side, but I’d like to go there again someday.

On this day, we stayed overnight in Clervo, which is about 30 minutes away from Viandin. It was a little disappointing village, but the hotel itself was okay and the adjacent restaurant was good.

Le Bec-Hellouin – Tour of the most beautiful villages in France 2011 No.4