When you’re driving in Europe, you can’t go wrong with a sandwich.

I can’t drink because I’ll be driving during the day anyway, and the villages I visit are small, so it’s enough to stay for about 30 minutes to an hour.

And it’s too rural to have a good selection of restaurants.

If so, there is nothing better than to eat efficiently while moving around in a car, and this sandwich is the most suitable thing for that. If you’ve been to Europe, you know that most sandwiches there are made with ham or cheese on baguette (French bread). There are no mainstream English breads in Japan, but they are not so common. Even if they sell it, it’s probably only the packed kind sold at service areas on expressways.

What I order relatively often is the classic « Jambon et fromage », a ham and cheese sandwich.

But when we visited the beautiful village of Perigord, home of foie gras, there was something called a « foie gras » sandwich! It’s just the real thing around here! But still, I was surprised at the price of 5 euros!

It was quite a lot of food for one baguette. 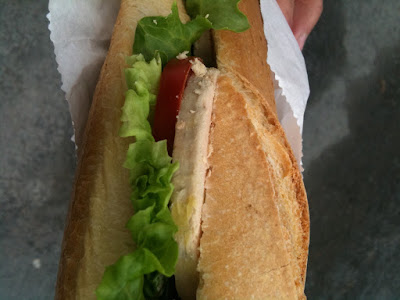 Of course, we eat lightly when we travel during the day, but at night we go to the hotel or town and eat good food properly. Summary of all 23 sites visited – Tour of the most beautiful villages in France 2012 -.

I've finished writing the 2012 GW version of my tour of France's most beautiful villages, so here's a summary. The last ...

Ansouis – Tour of the most beautiful villages in France 2011 No.60

A typical fairy tale town. It was lively on holiday.Visit date: 31 October 2015, weather: cloudyTo Bremen on the fairy t...