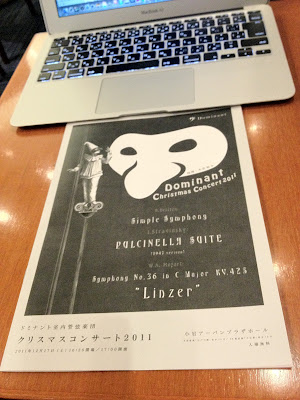 Christmas concert, but that was last week.

I went to listen to it because many of my friends and students I met at the grain orchestra were going to perform.

I genuinely wanted to hear Pulcinella, and also « Linz, » one of the most memorable Mozart symphonies that I listened to a lot when I was studying for graduate school.

I’ve never heard Simple Symphony before, but it was very good. I’ll buy this later. I’ll ask my followers what they recommend to play.

Yes, the encore was fun too. I like the Brazilian style Bach. 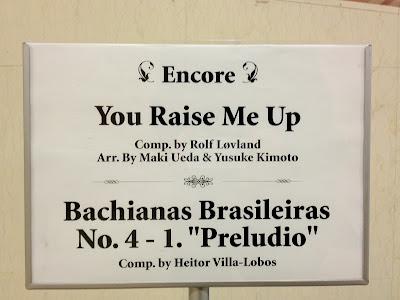 I think the performance was good. Each of them has high performance skills. However, I heard that the group had just started up, so they didn’t understand each other yet, and I felt that they were a little confused at times.

It’s amazing that you can make it sound so good just by talking about how many times you practiced, like four times.

But on the other hand, it’s fun to imagine how much better the performance would have been if it had been done more often.

It was such a concert.

Without further delay, thank you to all the performers for their hard work. And thank you very much for inviting us.

By the way, I heard that this Dominant Chamber Orchestra belongs to an organization called « Creative Team: Dominant », a creative team.

It's been about four years since I've seen the Berliner Philharmoniker. Finally, this day has come.I bought this ticket ...

Tour of Germany and the Enclaves Autumn 2015 No. 14: Vienna Philharmonic at the Cologne Philharmonie

Impressed by the passionate performance of Beethoven No.7 and No.8 by Vienna Philharmonic & Blomstedt!The purpose of an ...

This is an announcement of the concert in which I will perform.The 4th Regular ConcertDate and time: Saturday, October 1...
Off Sendai Part 3: Sightseeing
We’ll do it again: Grain An! January 15, 2012 Ensemble Concert by Grain Orchestra Members
Page d’accueil
05. Music
タイトルとURLをコピーしました