After leaving Akrotiri, we took a short detour and headed to another ancient site in Santorini, Terra.

The place is located in the southeast of the island. 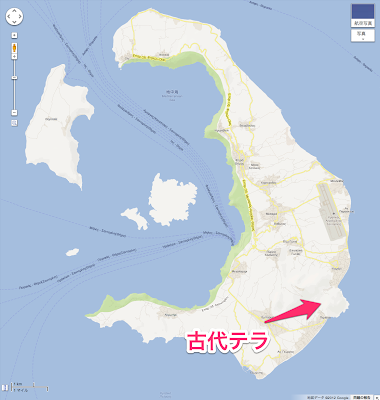 According to the guidebook, « go to Kamari or Perissa and walk 40 minutes from there », but in case of car, « you can go by mountain road from Kamari side to the front of the ruins », so it is a relief.

That said, that mountain road is pretty tight! The elevation is about 360 meters. 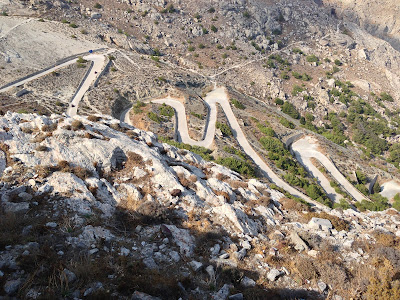 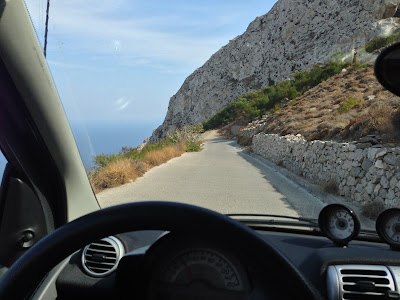 The slope is steep and the road is narrow. It seems to be an art to pass the occasional oncoming car, but I have been driving in Europe for a long time, so I was rather excited and flew with excitement (laugh).

It was a bit underpowered with the smart, but we still made it to the ruins with ease. It might be quite hard to walk.

Because there is no parking lot with this, I parked on the road properly and started sightseeing.

Now, this « Ancient Terra » was a city where people lived from around the 9th century BC until the deadline 726, according to the history.

However, it has been neglected ever since, and archaeological research did not actually begin until the end of the 19th century, more than 1,000 years later.

That’s a lot of mountain road to climb, and look at the view! Not recommended for those who are afraid of heights (laughs) This is just the east side of the island, where the airport is located, so you can see the airport from a hill. We were able to see some planes taking off and landing during our sightseeing. Basically, only the foundations of the ruins remain, but just looking at them was enough to remind me of the scale of the city and what it looked like at the time. By the way, there is also an explanation board like this. There is also English, so even if you are interested in it, you can somehow understand it. (Most of the time I didn’t read it properly…) We are really blessed with good weather. However, although the altitude is there, it was somewhat chilly due to the wind, although the sunshine was strong. The Plaka district is a historic area to the northeast of the Acropolis, where houses from the 19th century have been pr...

The next stop after Lykavittos Hill was the National Archaeological Museum. We took a little subway to get there.A trans...

On the second day in Athens, after visiting the ancient Agora, I took a short walk around Plaka (I'll come back to Plaka...

Mainland Version No.9 Crossing the Peloponnese -2012 Greece No.25

Mycenae is the next stop after Olympia.Olympia is located at the western end of the Peloponnese, near Pyrgos, while Myce...

The northernmost city of Santorini, a city that is synonymous with Greece, a city that everyone has seen a picture of at...
Santorini No.8 Akrotiri Site -2012 Greece No.14
I went to Sankeien.
Page d’accueil
2012 Greece
タイトルとURLをコピーしました