It is the wine museum of this travelogue, and it is not an exaggeration to say that it is the biggest impact in a sense while it is the first sightseeing on the first day of Santorini Island in this Greek travel.

And if you’re ever in Santorini, this is the place to go.

Now, I arranged a car at the hotel safely.

Once you have a car, you can run around like a fish in water, and the first place we visited this day was the Wine Museum on the way to Santorini Airport from Fira.

Even though we got a little lost, we were only about 10 minutes from the city of Fira.

It may be the first thing in the morning, but we are the only tourists…. The first impression is quiet and really okay? I felt like. No, because this Web site was surprisingly splendid… I was very disappointed. 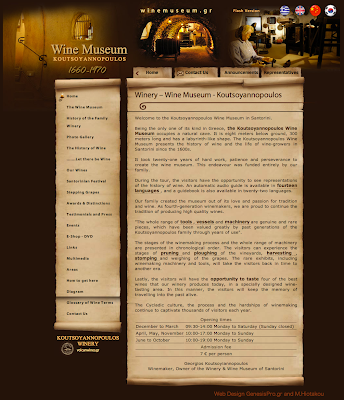 Anyway, it is inevitable that I came here, and I went through the entrance into the building, and I bought a ticket in the souvenir shop style.

The first thing that surprised me was the variety of languages supported by the « audio guide »! 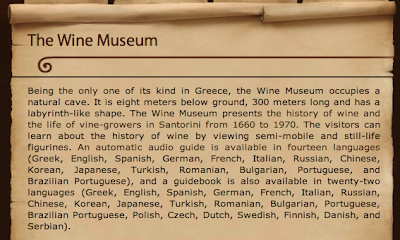 The guidebooks are available in 22 languages….

Why do we have to go so far…

Anyway, I took a Japanese audio guide, or rather, it was given to me half-heartedly, and headed for the museum in the basement after the brewery.

First of all, this area is rather normal. When you come down the first stairs to this area, the audio guide will start. Well, it was a local audio guide, so the guide spoke machine-like Japanese, and I was beginning to regret that it was going to take a long time and be a pain in the ass!

And all of a sudden, the guide started talking!

Apparently, « Purosuke of the Kutcho family » is the owner of a winery on the island, and is a famous man who has contributed greatly to the economy of Santorini.

But it’s a Japanese guide, so it’s in Japanese, but even the name is so Japanese-style that I can’t help but be curious…

So, just when I was excited to move on!

Suddenly the cave, which had been pitch black, lit up and the doll suddenly started to move! However, the more you listen to the strange Japanese guide and the famous « Purosuke » who kept appearing on the stage, the more you understand the history of Santorini’s wine, which is very interesting.

He explained in detail about how the grapevines on Santorini crawl on the ground because it is so dry here with little rain, the evolution of grape pressing technology, where Purosuke imported the press from, and the history of the press.

I learned a lot, especially about the technological evolution of the press and how to keep the flavor of the grapes intact.

Although more than half of the exhibits were scary puppet shows, there were plenty of other exhibits, and before we knew it, we were walking around the underground museum enthralled. Incidentally, Santorini wine was packaged in leather bags until the 1970s. Bottles have only become popular in the last 30 years, but at that time there was still a lot of prejudice and bottles did not become popular.

After about an hour of getting used to the scary dolls, we finally saw the exit of the cave museum.

The last exhibition is the office of « Purosuke » and his biography. He was very dedicated to his work and his office chair had no backrest. He devoted himself to his work all day long without leaning back.

This is the end of the underground museum. We came back outside again. And we realized! It took me a few more days to realize the fact that (laughs).

After visiting the underground museum, you will have a tasting. What’s more, the explanation of this tasting is also audio-guided. This is great!

We started with a white wine made from a grape called Asilitiko, which is only found in Santorini, and then tasted several kinds of red wine and dessert wine. We were able to taste some of the red wines and dessert wines. This is the end of the wine museum tour. We bought a bottle each of red and white wine as a souvenir. It was 15 euros each.

The museum was initially deserted, but by the time we finished sightseeing, several groups of tourists had arrived.

At first, I was worried about this wine museum because of its suspicious atmosphere, but I’m really glad I came.

Later, I drank the white wine I bought as a souvenir at home, and was surprised at how delicious it was! 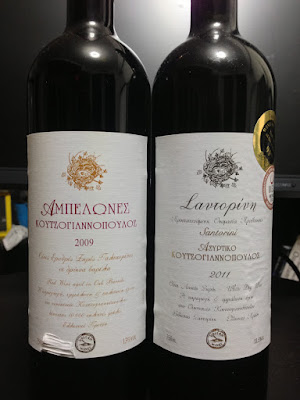 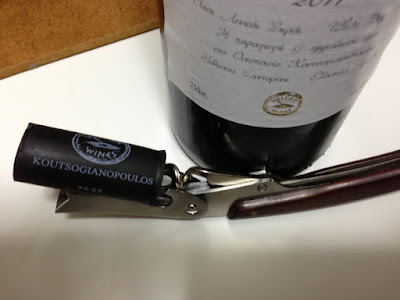 It was so delicious that I regretted not buying more.

From the beginning, it was an unexpected great harvest and very exciting sightseeing in Santorini.

Before I knew it, it was already the sixth day. We had an early start this day. We checked out of the hotel early at 7:3...

Date of visit: August 12, around 5:00 p.m.Quedlinburg（クヴェードリンブルク）を出発、ここからはアウトバーンも使えるなど道も分かりやすかったため、迷うことなく、今度はかえって予定よりもやや...

More summary information about the Medoc Marathon will be developed below. Please wait a little longer.メドックマラソン 2014 - M...

20081101とりあえず無事に空港へ戻りレンタカーを返却することができた。今回も特段トラブルもなく順調な車旅行となった。とくにスペインは予想以上に道案内が親切であったため、ほとんど道に迷うことがなかったと思う。さて、本日は午前中はトレド市...
Santorini No.2 Breakfast on the terrace and rent a car at the hotel -2012 Greece No.8
Santorini No.4 Pyrgos -2012 Greece No.10
Page d’accueil
2012 Greece
タイトルとURLをコピーしました