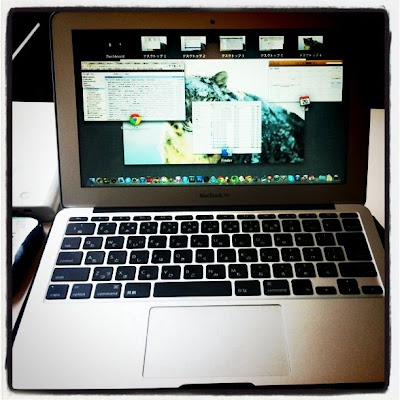 I’ve got a bit more time before I pick up my instruments, so I might as well write something.

In the past few years, I’ve been spending more time in front of my PC than ever before due to the shift to cloud computing, life without TV and newspapers, and paperless society. In proportion to this, I think that the frequency of updating my blog is also increasing.

Of course, there is also the influence of travel. In particular, since I’ve been traveling mainly with a rental car recently, the range of my activities has expanded greatly, and as a result, I visit many places in one trip, so no matter how often I write, the material for my diary just keeps piling up….

So, I think I’m getting some speed in writing blogs. Anyway, I’m trying to write as many as I can. Naturally, the quantity is increasing, but the quality of the content itself and the level of writing may be decreasing.

By the way, there are many social networking sites such as Twitter, Facebook, and Google+. I think there are many people who don’t know how to use them or how to get involved with them.

Especially since the advent of twitter, there are probably many people who have stopped updating their mixi diaries and blogs.

But for me, this blog, which is operated under my own domain, is the foundation of everything. This blog has been around for 7 years now, and I’ve had the domain name for 6 years, and it’s one of the few hobbies that I’ve been doing for a long time.

The huge archive basically exists in the rental server, but I’m using a WordPress plugin to send DB backup data to gmail, so there’s a huge archive in Google as well.

Therefore, we can handle the transition to a new service.

It’s not easy to migrate the archives on mixi or Facebook to other services, and the same goes for twitter. I think it’s because they are running their own blog on their own domain.

Even if the trend of the Internet changes rapidly, I think I can continue to actively use new services as soon as they appear without worrying about whether they will go out of style because I have a firm place in the Internet world.

Why did I think this? Here's a quick explanation.今週iOS8.1にしたらワンタイムパスワードアプリが起動するもすぐに落ちて使えない状態になった。おそらくiOS8アップデートした直後から使えな...

Snaplite is very stylish and works great with the iPhone app!

ちょっと散財の話題を。「SnapLite」を買いました。I think I made a good purchase. Very satisfied.SnapLite - Smart lighting that turns your iPh...

Towels and Socks Preparing for the 2% inflation target

すっごい適当なタイトルですが、単なる買い物履歴です（笑）There are a lot of things that go into Abenomics, but the universal irony is that there is n...

Text mining, big data, etc. have been buzz words for a long time now, and the story of "predicting stock prices from twi...